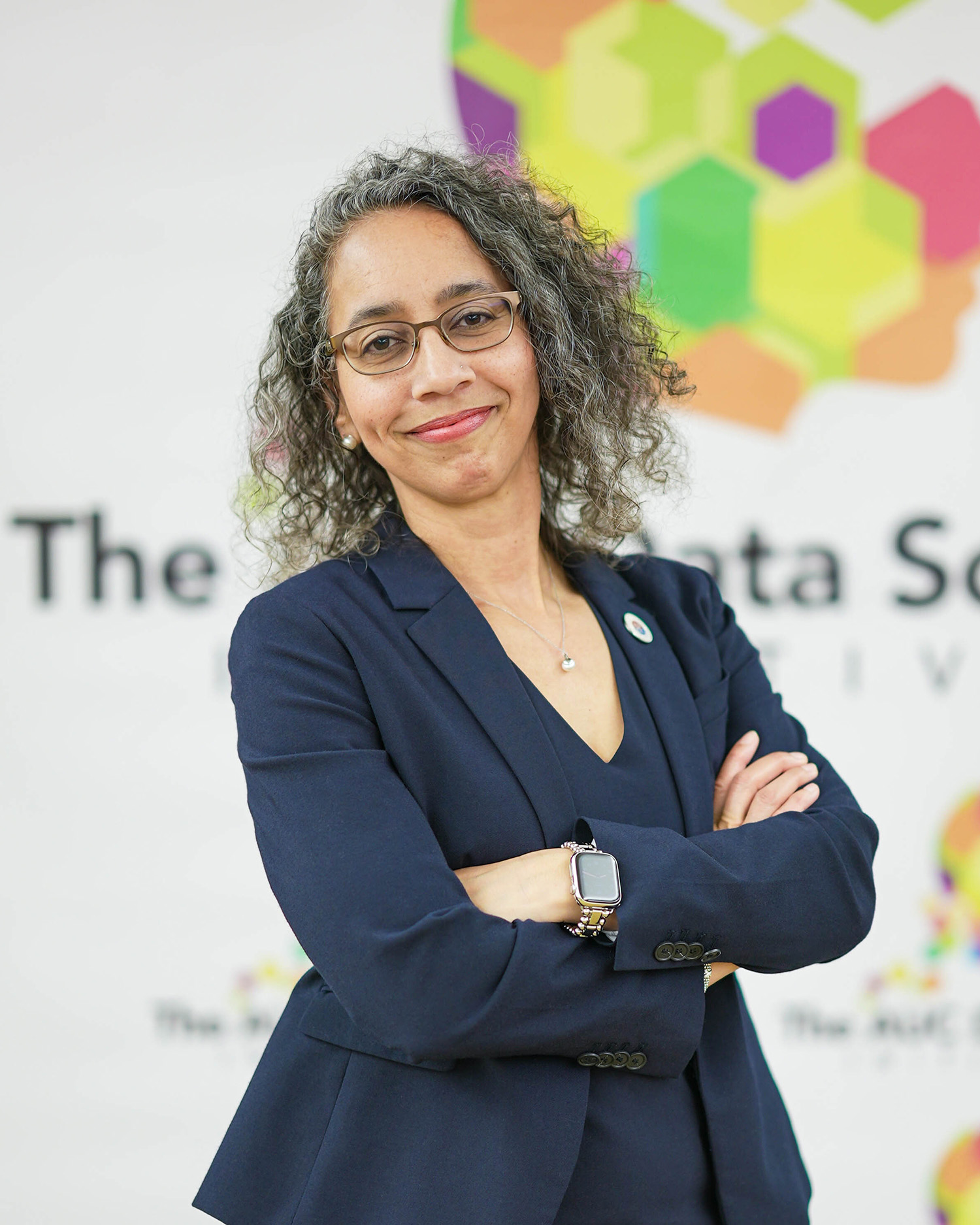 Revenge of the
Data Scientists

Talitha Washington ’98 MS, ’01 Ph.D. is turning tables on the data science that has worked against Black and Brown people — by creating science and math pathways for students of color.

peaking last year with the late UConn professor Joseph McKenna, he recalled a colloquium on mathematical studies of bridges he’d once given at Bryn Mawr College. He happened to run into Talitha Washington, one of his graduate students, who was there visiting friends. They said hello and McKenna went off to his colloquium.

Speaking last year with the late UConn professor Joseph McKenna, he recalled a colloquium on mathematical studies of bridges he’d once given at Bryn Mawr College. He happened to run into Talitha Washington, one of his graduate students, who was there visiting friends. They said hello and McKenna went off to his colloquium.

“Usually these talks are fairly dull, with about five or six faculty members who attend out of a sense of obligation more than anything else,” he said. “But when I came to give my talk, somehow Talitha, in wandering around the department, had rounded up 10 to 20 undergraduates to come to my talk.”

It must have taken a certain amount of courage to go into a completely strange place and gather up all those people, said McKenna. “That’s just the way she was. Talitha made things happen. She wasn’t intimidated or awed by anyone. She said, ‘Here’s a great talk, let’s all go to it.’”

Making things happen has been a way of life for Washington ’98 MS, ’01 Ph.D. She holds fast to the phrase “I’ll find a way or make one,” which is the motto of Atlanta University (now part of Clark Atlanta University), the oldest historically Black university in the South, where Washington is a professor of mathematics.

It’s also her mantra, she says, as she directs the Atlanta University Center (AUC) Data Science Initiative to bring underrepresented voices into the exploding field of data science. She likes how so much lives in the statement: possibility, resolve, carving a new path.

“We have all these examples of how data science has negatively impacted Black people,” she says, noting facial recognition software and all manner of algorithms where the science can lead to more harm than good “if data sets aren’t culturally relevant or if they aren’t taking into account all the nuances. Last year there was a big cry from the math community to stop doing work with the police because of predictive policing models built on biased algorithms. The consciousness of the data science community was born out of what happened to George Floyd and others.”

At the AUC, Washington is flipping that narrative, working to “develop talent and become a significant producer of African Americans with expertise and credentials in data science,” she says. “We also want to create new knowledge and lead national efforts to address race, gender, and social justice aspects of data science, focusing on topics that impact Black America.”

Washington was teaching at Howard University and starting her first year at the National Science Foundation (NSF), where she had built and coordinated a STEM program across 532 Hispanic-Serving Institutions (HSIs). She loved what she was doing at Howard and the NSF and hadn’t planned to make a change. But when she was “tapped on the shoulder” and asked to consider applying to Atlanta, she says she kept thinking about the impact of data science. Despite its use in nearly every field from health care to banking, education to hospitality, this arena of developing algorithms and analyzing data continues to lack diverse voices.

A Spelman College graduate, she was also drawn to AUC’s deep roots in social justice. “In 1960 student leaders of AUC member schools [Clark Atlanta, Morehouse College, Morehouse School of Medicine, and Spelman] came together to challenge the scourge of segregation and created a manifesto appealing for human rights,” Washington says. “Our Data Science Initiative is built on this backbone of students really motivating social justice throughout our history.”

The job, though, might have intimidated a less courageous soul. “I work across six different institutions, four schools, a library, and the AUC Consortium,” she says. “I have direct lines to all the provosts, the director of the library, and the AUC Consortium’s executive director, and dotted lines to all four presidents. That creates an interesting dynamic. Normal people would probably have run for the hills.”

Growing up in Evansville, Indiana, Washington never imagined going into mathematics or data science. In high school, she excelled in English, winning a city-wide writing contest. “I liked creative writing, painting pictures with words, I still do,” she says.

But math started to work its wonders on her, too. She went to Spelman to study engineering, but upon discovering it was a five-year program, decided to major in math. She hadn’t planned on graduate study either, but her Spelman advisor, Jeffrey Ehme, urged her to continue her studies, and she came to UConn.

It was a tough time at first, she says. “Everyone asked me what country I was from, and I’d say, ‘I’m from Indiana.’” While the master’s and doctoral programs in mathematics had international students, she says, “I was the first U.S. Black American in the program.”

She found support from Willena Kimpson Price, director of the African American Cultural Center. “She was a Spelman alum and super outgoing, and it was so nice to be received by her and the cultural center.” She was encouraged, too, by professors McKenna and Yung-Sze Choi. When she became pregnant with her first child as she pursued her doctorate, she doubled up on teaching in the fall and “had my daughter on Christmas Eve.” She asked McKenna if she could take her nursing daughter to classes in the spring. He said yes, and her daughter quickly became a fixture at lectures and seminars. “The joke was that a talk was good if it put the baby to sleep,” says Washington. 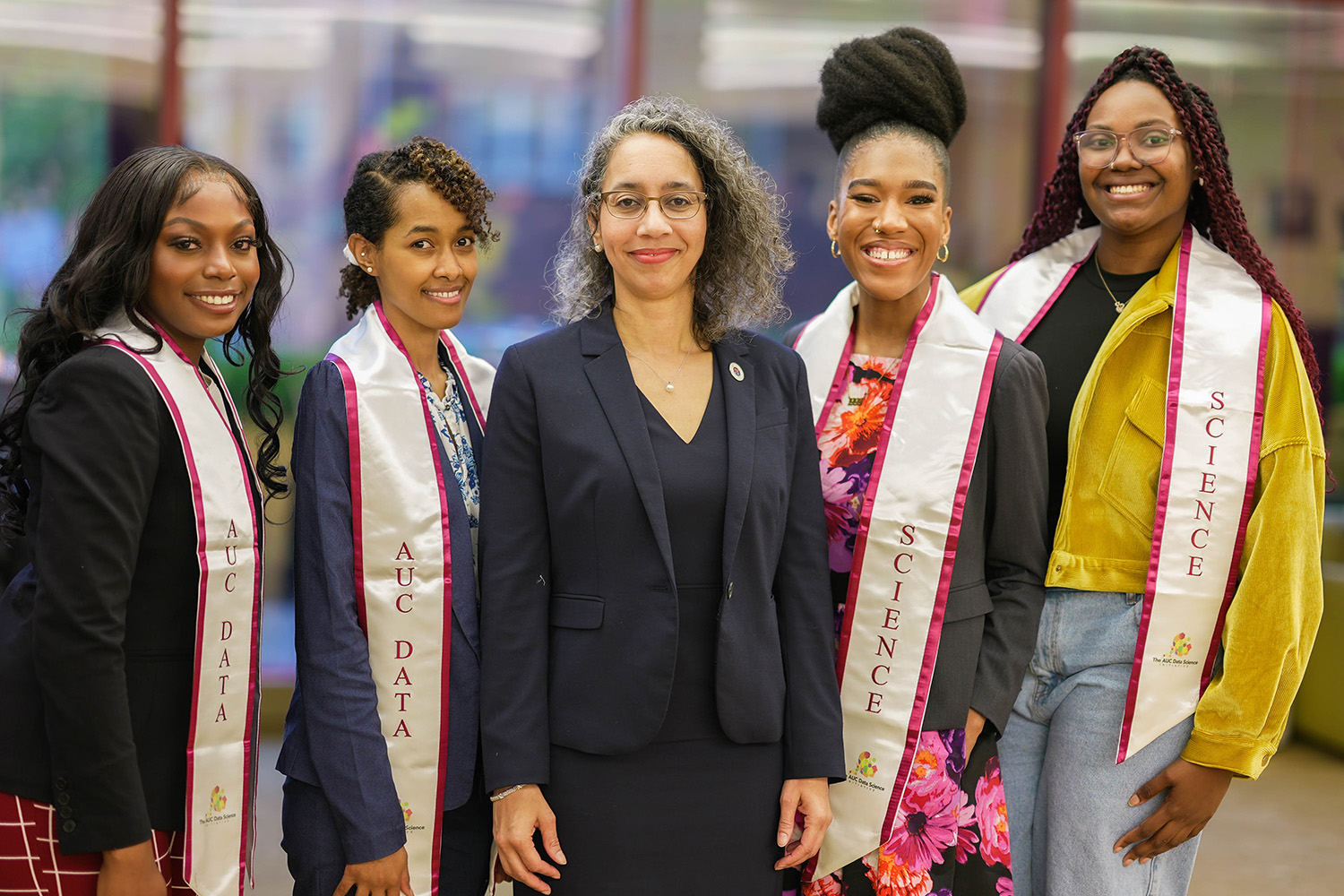 “One can imagine the obstacles for being a new mother while being a mathematics doctoral student,” says Choi. “Not only did she perform superbly in both roles, but she was also the chairwoman of the Black Graduate Student Association and a graduate student senator. Maybe it was through these latter roles that she began to develop an interest in promoting underrepresented voices in the field of science.”

McKenna said she was so talented, the mathematics faculty vied to have her become their thesis student. “Mathematics is very much a spectrum of people, some who are very good at nitty-gritty details stuff, the sort of people who, if you asked them what day of the week the 13th of December fell on in 1571, they would be able to figure that out,” he said. Others see the broader plan.

“Talitha very much fell into second category,” he said. “She was good at the technicalities, but her strength was the big picture.”

Washington’s trajectory went through Duke University, where she did postdoctoral research, to the College of New Rochelle, the University of Evansville, Howard University, and the NSF. At the same time, she raised her three children (now all pursuing STEM studies), coached their sports teams, and continually encouraged young Black and Brown students to become involved in math and science.

The secrets to navigating her busy life: always seeking out support systems, taking power naps, and working out. “I’m a fitness fanatic,” she says.

In her first year at the NSF, she developed the $40 million STEM program for HSIs, creating programming across hundreds of research universities and community colleges. Wondering how she would reach all of those colleges and all of those students, she says, “I began by listening.”
Listening with that data-science, big-picture brain allowed her to build a program “around what people wanted, not what we wanted. When I listen, I’m translating what people are saying into programs and into initiatives. It’s like my brain is interpreting what I’m hearing, and my job is to develop the kinds of programs, supports, and innovative spaces where students can thrive.” Her team devised curricula, helped hire professors, and created data science clubs for students.

“She has done wonders for the mathematics community,” says Choi. 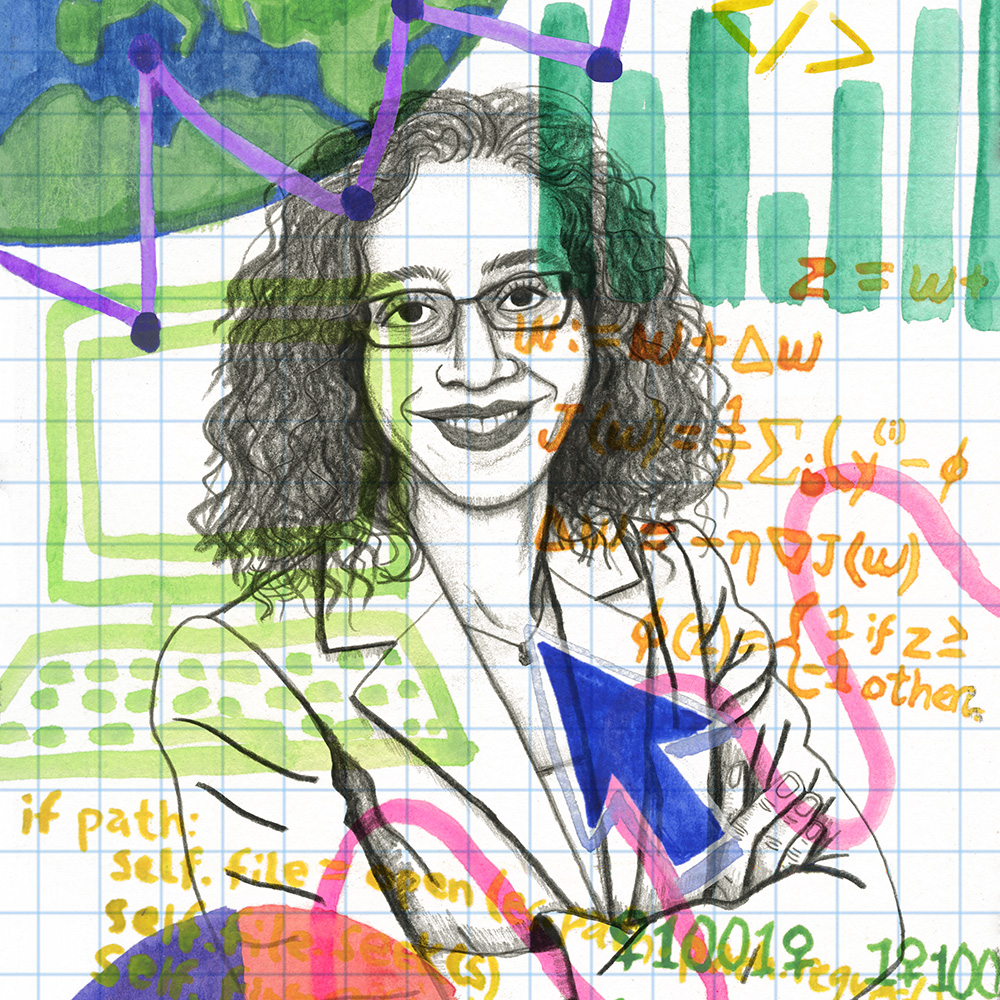 “Everyone asked me what country I was from, and I’d say, ‘I’m from Indiana.’”

Washington’s work has garnered many industry accolades, among them an NSF Women’s History Maker award and a Howard University Outstanding Faculty award. She recently became the first person ever to be named both a 2021 Fellow of the American Mathematical Society (AMS) — one of just 46 Fellows from around the world — and a 2021 Fellow of the Association for Women in Mathematics (AWM) in the same year. She is now the president-elect of AWM.

None of this surprised McKenna. “Indomitable is the word I’d use,” he said. “You could see the joy she had in doing what she did. And she was just not intimidated by anything.”

She says being the first person to be named a fellow in two esteemed mathematical societies was a huge honor.

But it’s clear what matters most to Washington is the platform it gives her to usher more young Black and Brown people into fields where their voices matter. “It has been an honor to create a space where we can support the development of scholarly work to address these key issues,” she says. “I’m very humbled by it.” 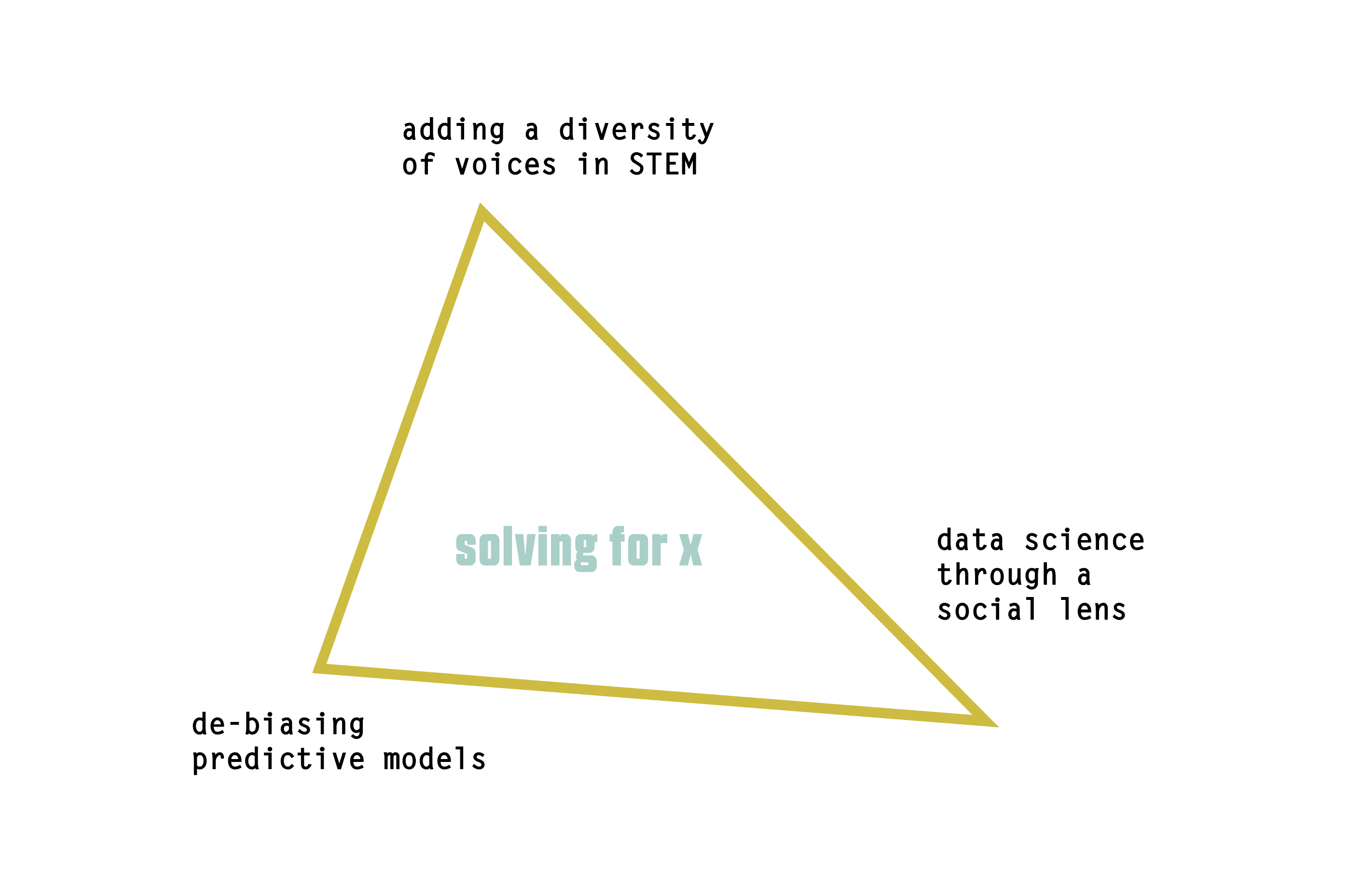