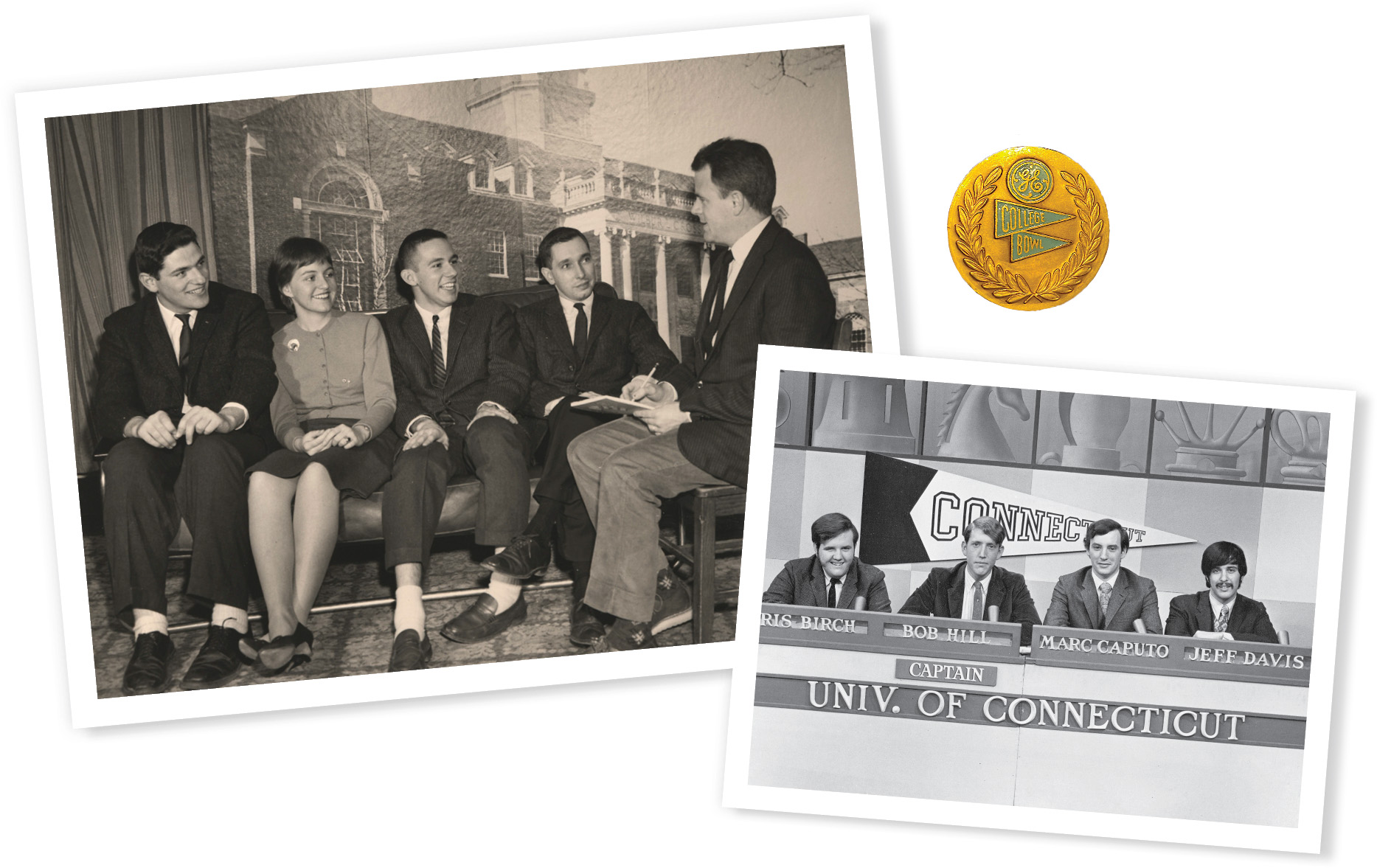 Fame is fickle. But while it lasts, it sure can be fun. That’s one lesson members of UConn’s 1961 and 1970 “GE College Bowl” teams say they learned. These fearsome intellectual foursomes appeared on TV’s original “College Bowl,” which aired weekend afternoons from 1959 to 1970, first on CBS and then on NBC. (Peyton Manning now hosts a revival.)

Before millions of viewers, schools battled each other for scholarship money. To win the honor of sweating under the bright lights, players had to survive round after winnowing round of on-campus competitions. “It was a process of endless, endless stagings of matches” broadcast over Storrs’ closed-circuit TV system, recalls Cris Birch ’71 (CLAS), a retired IT executive. “We were quick on the trigger when we knew the answer and smart enough not to bang the buzzer if we didn’t.” 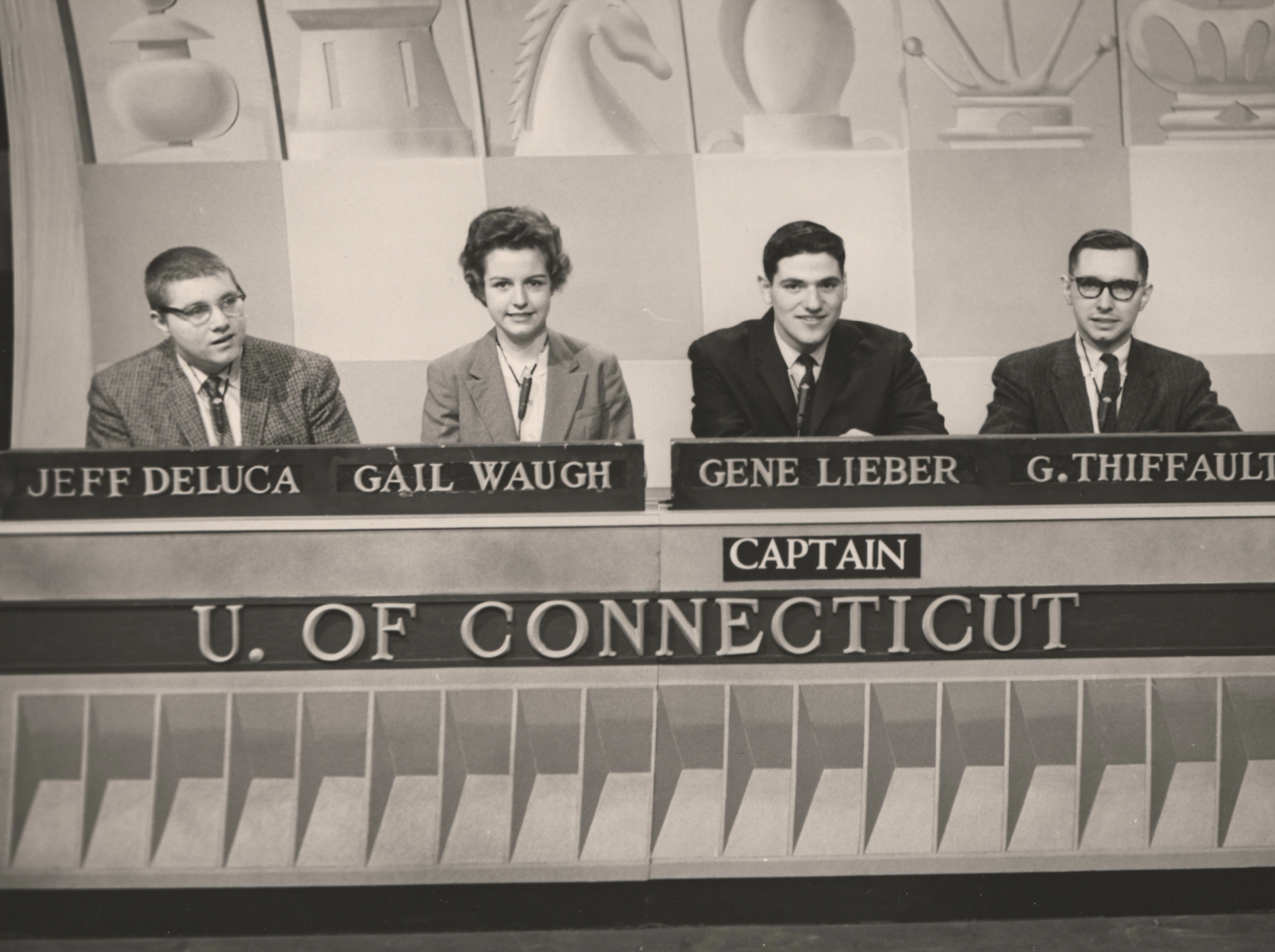 The all-male 1970 team and the 1961 team, which included Gail Waugh Hanna ’61 (CLAS), crammed their craniums with obscure facts. Or at least they tried to. The show was not for intellectual lightweights. The 1970 team had to listen to a snippet of Rachmaninoff’s “Prelude in C-Sharp Minor” and identify the key in which it was written. (No one got that right.) But the Huskies aced queries like “What is a Dewar flask?” “Who did Hamlet meet on the battlements of Elsinore?” and “What five-minute barrier was broken in 1956?” (a thermos, his father’s ghost, and the four-minute mile).

Wearing skinny ties and sporting tidy hairstyles, the 1961 team got “soundly thrashed” by Rensselaer Polytechnic Institute 295–70, reported The Hartford Courant. Now 81, team member Gene Lieber ’62 (CLAS) remembers “It was a matter of the speed of pressing the buzzer. They were a whisker ahead of us.” It was RPI’s fifth and final appearance. They had more experience.

The UConn quartet did have fun on-air. When host Allen Ludden kept mispronouncing the name of George Thiffault ’62 (CLAS), he quipped, “Thank you, Mr. Loodle.” Thiffault “covered himself in glory,” according to the Courant, notably because he successfully sang the first few bars of Brahms’ “Lullaby,” a feat the paper said was fitting because the part-time student was a father of three.

When the team returned to campus, the April Fools’ edition of The Daily Crampus greeted them.

“The week before we went on, I was, like, a big man on campus, but when we lost, we had to sneak back,” says Lieber, a former professor of American history at Essex County College in Newark, New Jersey. “And one of the big stories in The Crampus was that we had thrown the match.” April Fools! 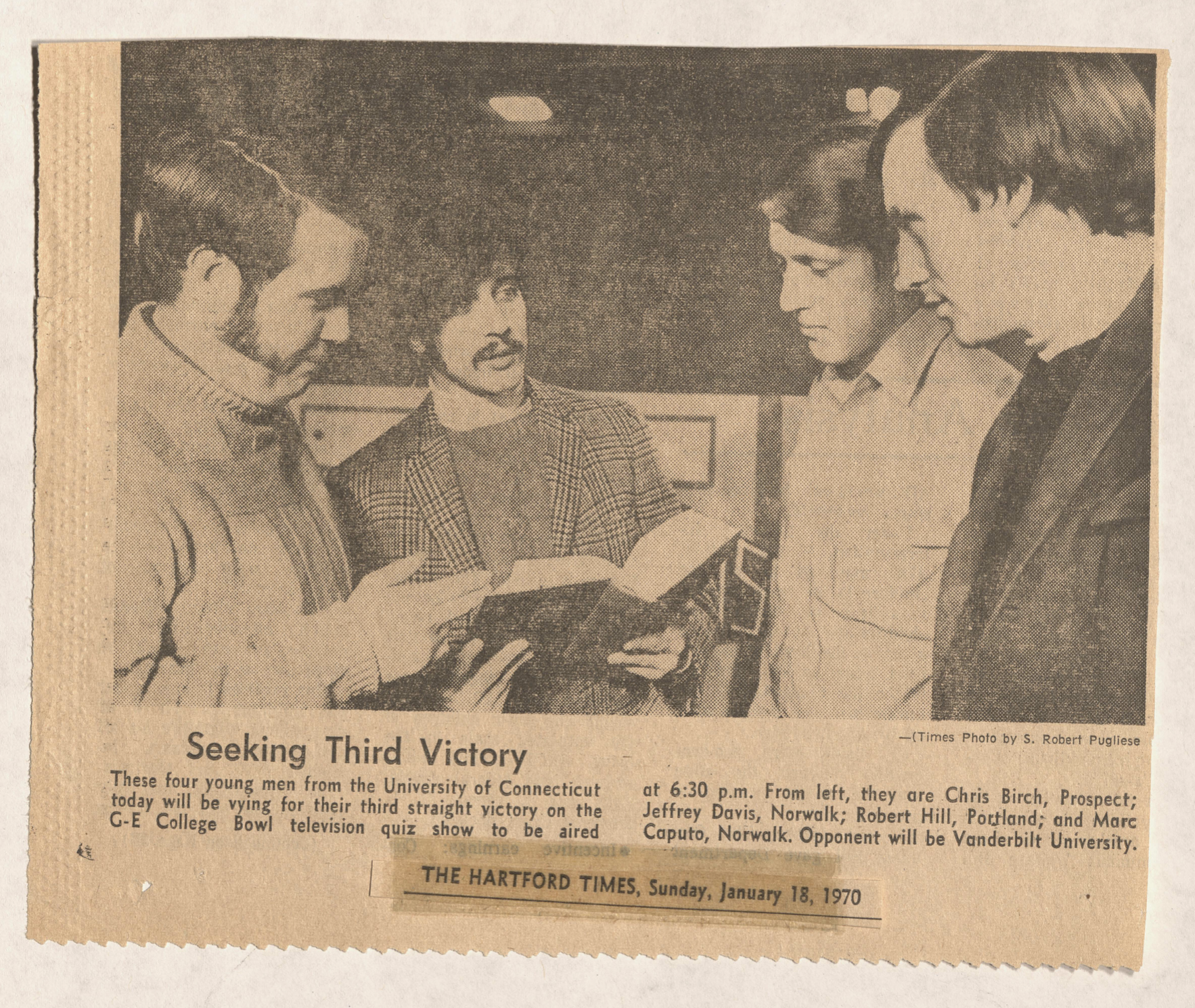 First, they nipped the University of Arkansas 180–170 with a come-from-behind overtime win. Physics major Birch blurted the answer to the question “What is the province of Germany that was ruled by three kings?” (Saxony.)

“I was the hero. It was absolutely amazing,” he says. Next week they crushed New York University 345–165 before being spanked by Vanderbilt 250–155. “We just couldn’t get the motor running,” says captain Bob Hill ’71 (CLAS).

The network feted teams, putting them up in swank hotels. The 1970 players stayed at The Warwick, where the Beatles had holed up in 1964.

“That was a big deal,” says Hill, a retired corporate training executive.

Players also got $25 a day in spending money. “It was a lot more than I was used to having in my pocket,” says Birch. He frugally dined with Hill at a Horn & Hardart automat, where you used tokens to pay for food behind glass partitions.

The network gave the students their choice of tickets to a Broadway musical. Steamy was the word for the show Hill’s team wanted to see. “Oh! Calcutta!” had full frontal nudity.

“I’m sure that decision went through several levels of NBC executives,” Hill presumes. The network let them have their way.

Hill’s shining moment came against Vandy. The English major “made his singing debut when he was called upon to ‘sing, hum, or whistle’ a few bars from ‘Ave Maria,’” reported The Hartford Times. “As soon as the host said “Ave Maria,” I nailed that buzzer. I had grown up Catholic. Then I realized the version I could sing was not the one in any opera. It was a warbled Catholic version that was pretty awful,” says Hill, adding, “I never lived that down.”

“You couldn’t walk anywhere on campus without someone saying something to you,” says Hill, noting, however, that the attention quickly faded. 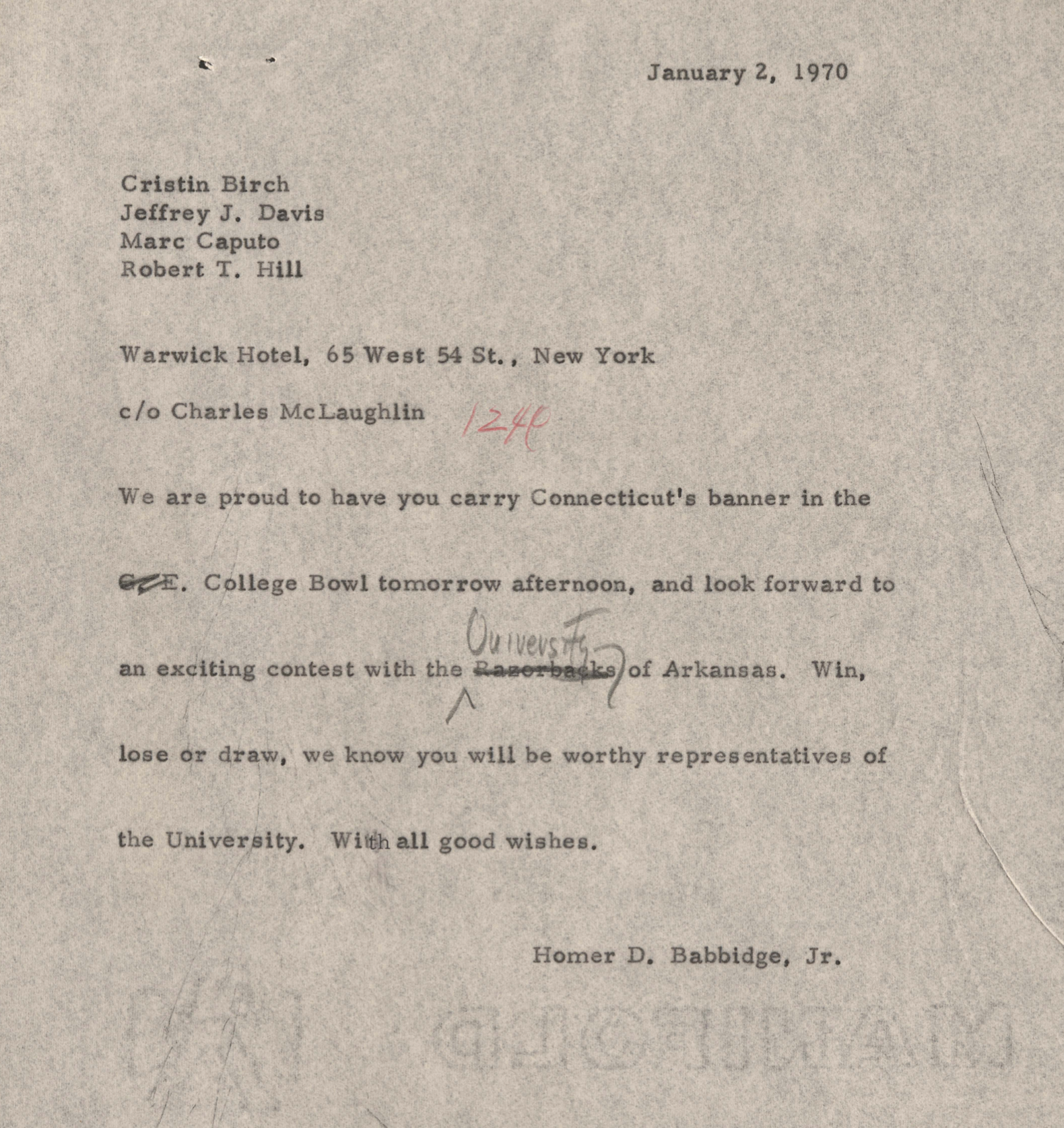