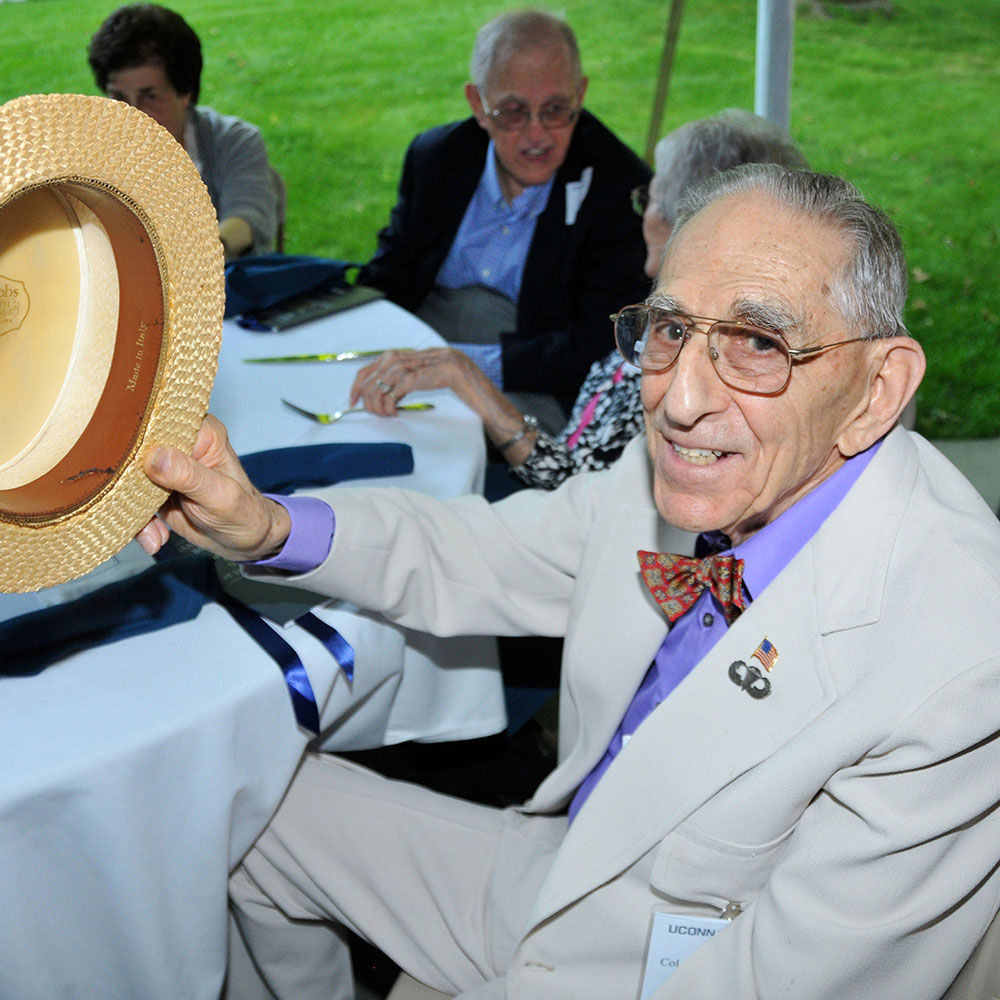 Still practicing law at 100 years old, Morton Katz ’39 (CLAS) ’51 JD has worked as a special public defender at Hartford Superior Court for the past 20 years. He says his wife keeps him healthy, and making sure defendants have good representation is what “keeps him going.”

When you ask Morton Katz ’39 (CLAS) ’51 JD what he learned at UConn School of Law, three lessons top his list: how to be a good lawyer, the importance of preparation, and knowing when to settle a case. Katz has had more time than most to ponder the value of his legal education, and, at 100, he’s still putting those lessons to use.

For the past 20 years, Katz has worked as a special public defender at Hartford Superior Court. The rest of his nearly seven decades in practice include a mix of civil and defense work and an appointment as a Superior Court magistrate. He is also a decorated World War II veteran who remained in the army in intelligence and civil affairs roles until his retirement as a colonel in 1972.

While his frame may be bowed, his wit and recall are stunningly sharp. He delights in telling stories about his favorite cases, and ticks off names and dates with more precision than people half his age. When he talks about his upbringing in Hartford and service in the army during World War II, a fuller picture of him comes into focus. That’s when his self-effacing nature, innate sense of justice, and commitment to serving others shine through.

Katz faithfully attends conferences at the law school and serves as a mentor, regularly visiting the school to speak to students. “He brings immense warmth and vitality whenever he comes to campus. His example is a source of inspiration to everyone around him,” says Timothy Fisher, dean of UConn Law. “He is a national treasure.”

A self-described “Depression kid,” Katz dismisses himself as a mediocre student — despite making the National Honor Society at Weaver High School in Hartford. With the help of a generous uncle, he attended UConn, then known as Connecticut State College, and majored in chemistry, for which he says he had no aptitude.

Katz joined the ROTC and Citizens Military Training Camps and received a commission in 1940. Then, halfway through his second year of graduate school at Iowa State University, the Japanese attacked Pearl Harbor.

“My professor, Henry Gilman, said ‘Write your thesis, and we’ll get you your master’s degree,’” Katz recalls. He left school in April 1942 for basic training at Fort Benning. On the train to Georgia Katz remembers four officers of color who were “shown terrible racism,” he recalls. “The treatment was shameful.” The impression stayed with him and changed the course of his life.

During the war, Katz crisscrossed North Africa and Europe. He fought at Venafro and Anzio Beach in Italy, in the south of France, and the Ardennes region of Belgium, first with the army’s 502nd Parachute Infantry, then with the 101st Airborne and 509th Parachute Infantry. When in 1945 his unit suffered massive casualties, he joined the 82nd Airborne’s 505th Parachute Infantry, crossing the Elbe River and helping to liberate Wöbbelin concentration camp.

“The S.S. officers got away, but we captured the commandant, and I have his gun to this day,” he says.

Katz returned in 1946, thankful to be alive. After marching in the victory parade up Fifth Avenue in New York City, he traveled to the West Coast, stopping to visit the families of his fallen army buddies along the way. Back at Iowa State, he received a teaching fellowship, but didn’t like the research side of the work and resigned in 1948. He then enrolled in UConn School of Law and after only one class, he knew he had found his calling.

He credits his wife Shirley, a retired pharmacist whom he married in 1964, with keeping him healthy all these years. He also has a purpose in life: Making sure defendants have adequate legal representation is what keeps him going, he says.

“My daughter asks me, ‘Why don’t you retire?’” Katz says. “I tell her, because I love it. Somebody needs me, and I have to be somewhere. I’m doing what I want to do, and there is some defendant out there who needs a damn good lawyer.”