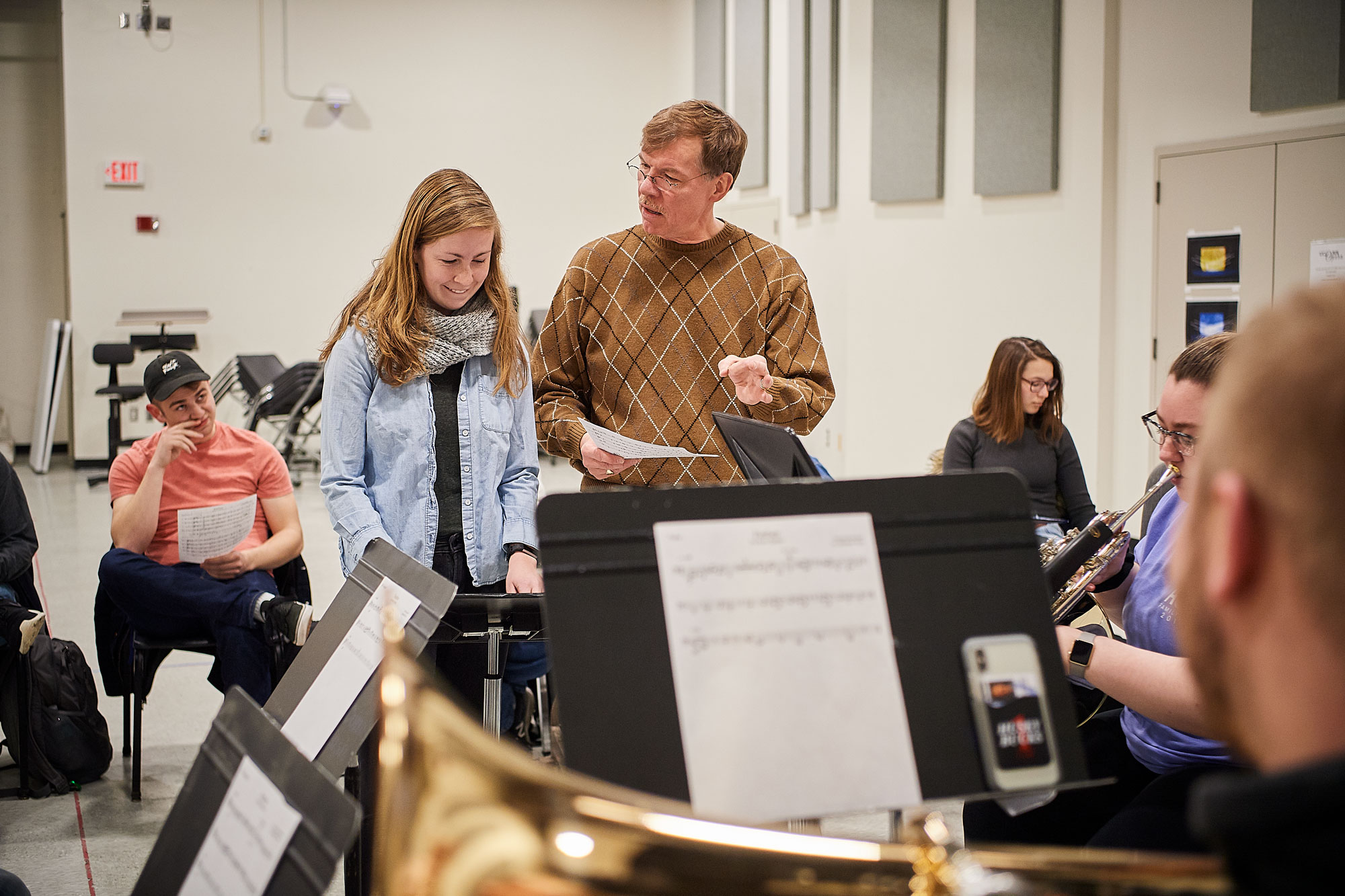 our days after walking off the stage at the Staples Center in Los Angeles with a Grammy Award, Kenneth Fuchs stands before a group of students presenting original quintet compositions as performed by fellow student musicians (above). Listening to a piece for oboe, flute, clarinet, French horn, and bassoon, Fuchs asks the composer if after hearing her music performed she would make any changes. She thinks the ending could be more dynamic.

Four days after walking off the stage at the Staples Center in Los Angeles with a Grammy Award, Kenneth Fuchs stands before a group of students presenting original quintet compositions as performed by fellow student musicians (above). Listening to a piece for oboe, flute, clarinet, French horn, and bassoon, Fuchs asks the composer if after hearing her music performed she would make any changes. She thinks the ending could be more dynamic.

“Begin thinking about the range of the instruments,” Fuchs tells her. “What will give depth to the sound? The bassoon goes down to B flat, so use it to enrich the sonority in the bass. In the opposite direction, the French horn is like a yellow highlighter. As you did with the oboe and flute, use the upper register in the French horn. I loved it.”

In guiding his students toward a deeper understanding of the creative process, music composition professor Fuchs is passing along his experiences in the music industry, experiences that are more real than the illusions of overnight success depicted on shows like “American Idol,” but only slightly less star-studded.

Fuchs first came to music in church, singing in the choir at the age of 10. Piano lessons soon followed, then school band at Piper High School in Sunrise, Florida. The band’s new director, Bentley Shellahamer, became his Mr. Holland — the inspirational teacher in the 1995 Richard Dreyfuss film “Mr. Holland’s Opus.” It was Shellahamer who set Fuchs on the path to becoming one of America’s finest composers, with four Grammy nominations for his contemporary classical recordings with the London Symphony Orchestra.

When Fuchs told Shellahamer that he wanted to become a composer, the band director wrote out the ranges for all the instruments in the band on a sheet of manuscript paper that Fuchs still has. He encouraged his student to write prolifically, promising to play anything he wrote.

“And he did,” says Fuchs. “He played the first piece, which won a student composition award from the Florida Bandmasters Association.”

“You learn that the real greats are big enough to lend a helping hand.”

Now Fuchs tells his student composers to write as much as possible and when they’ve finished a piece, he tells them, “You have to find the players you have written it for, get them to rehearse it, and hear what it sounds like immediately so you can know if the choices you made are those you really want. That was such a profoundly important gift that Mr. Shellahamer gave me.”

And he pays it forward. “My job is to get them to take their enthusiasm, or their interest in wanting to become composers, and to focus it. If a student comes to me with very little experience or really not having written much original music, the first thing is to get them interested and excited about writing something that they can finish and feel good about,” says Fuchs. “That begins with writing a work for their own instrument. What better way for them to express their own musical thoughts than through writing for an instrument that they feel comfortable with?”

Some of the composition forms Fuchs teaches weren’t around when he was in school, as his digital media and design program students demonstrate in creating soundscapes to animate digital projects. “We work on matching the sound with the motion. My experience with composition students at UConn is that many have a sincere interest in video game scores, which are elaborately produced with full-sized symphony orchestras. There is a real crossover here. The goal of any composition is to put over the footlights to the listener a communicative musical statement, whether it is for piano trio, symphony orchestra, or string quartet. You need to write music that the audience can understand. That’s what it’s all about. It is the composer’s job to understand the power of all different kinds of musical sounds so the audience responds.”

After earning a music degree from the University of Miami, Fuchs hoped to study at The Juilliard School in New York City under the masters of American symphonic music — Milton Babbitt, Elliott Carter, David Diamond, Vincent Persichetti, and Roger Sessions. He immersed himself in their music and wrote audition compositions for band, not orchestra. The Juilliard judges advised him to expand his knowledge, compose an orchestral work, and reapply.

Disappointed but determined, Fuchs sought advice from three composers he had written to while studying in Miami — Aaron Copland, William Schuman, and Stephen Sondheim. His letters asked about particular pieces of their music and the decisions the composers made about formal structure and instrumentation.

“They took my questions seriously and responded to the letters. To a person, each of them said when you come to New York, we’ll get together,” Fuchs says. “You learn that the real greats are big enough to lend a helping hand.”

He spoke with Schuman, the former president of Juilliard and Lincoln Center, and met with Sondheim just after “Sweeney Todd” opened on Broadway. At Patelson’s Music House, the well-known music store that used to sit across from the stage door at Carnegie Hall, he told owner Joseph Patelson that he would like a job.

Two weeks later, a letter arrived from Patelson offering him one. Later the same week, Schuman wrote to say he had arranged for Fuchs to take lessons from Stanley Wolfe, then-director of the Extension Division at Juilliard. For the next year, Fuchs worked at the music store six days a week and studied at night with Wolfe, beginning work on an orchestral composition.

This time his audition earned him admission to Juilliard, where he earned Master of Music and Doctor of Musical Arts degrees. 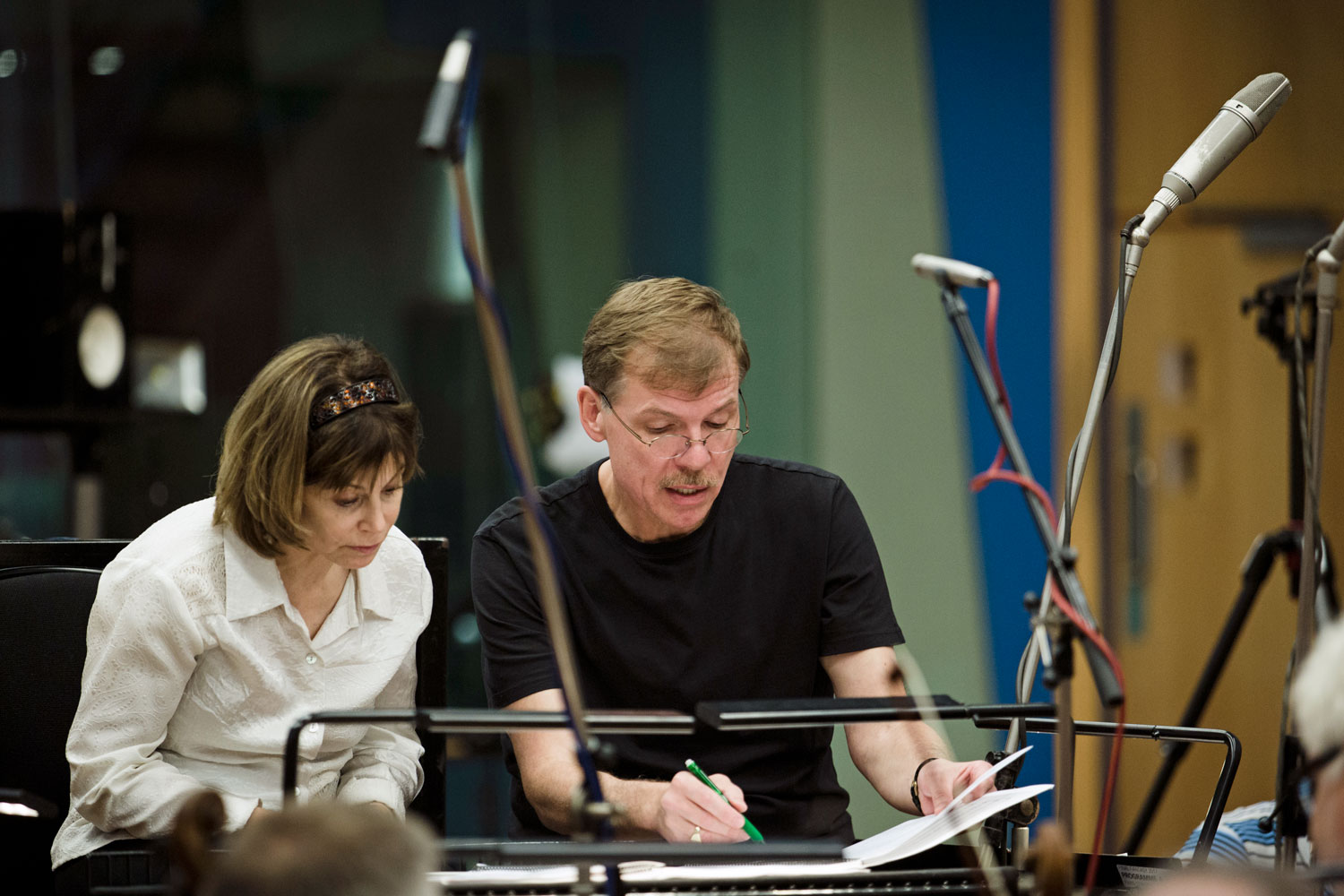 In London recording with the London Symphony Orchestra; below — at the Staples Center in L.A. during the 61st Annual Grammy Awards after winning Best Classical Compendium for “Fuchs: Piano Concerto ‘Spiritualist’; Poems of Life; Glacier; Rush.” 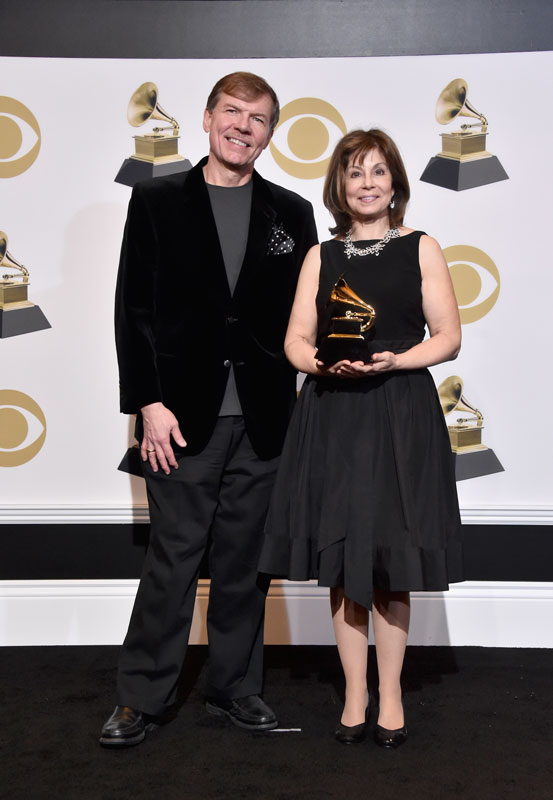 Fuchs continued to write music but felt he had not yet found his own voice. He decided to take on a large orchestral work and devote as much time as necessary to finding his writing voice. Over the course of two years that voice emerged as he composed the 18-minute “An American Place.” In 2003 he completed “Eventide,” a concerto for English horn and orchestra, for Thomas Stacy of the New York Philharmonic.

While several of his ensemble compositions had been recorded by the American String Quartet and principals from the New York Philharmonic, Fuchs now was ready to record his orchestral work.

He reached out to JoAnn Falletta, a Juilliard classmate and rising star in the conducting world, to ask if she would be interested in conducting the new works, as well as “Out of the Dark,” the first of Fuchs’ works that Falletta had conducted while they were students. Her response was immediate: She accepted his invitation and mentioned she was going to be recording with the London Symphony Orchestra and might have time to add other sessions for his compositions.

With support from then-president of the University of Oklahoma David L. Boren and his development staff, funding was raised, and six months later Fuchs was in London recording with Falletta and the LSO. In quick order, their work was accepted by Naxos, the world’s largest classical record label, for its new American Classics Series, aimed at promoting solo discs by composers, and “Eventide” was nominated for two Grammy Awards.

“Nobody could believe a first disc by a virtually unknown composer would get two nominations, but it did.” Fuchs says. “We didn’t win, but that’s what started it all.”

“To realize that so many artists of all styles of music have recorded at that studio and to walk down the halls and see the pictures of those superstars . . . is thrilling, it’s inspiring . . .”

“It all” includes recording in London at the famed Abbey Road Studios, best known for albums by The Beatles but also where many of the 20th century’s most celebrated musicians recorded, including pianist Vladimir Horowitz, cellist Pablo Casals, bandleader Glenn Miller, and singer Tony Bennett.

Fuchs says being in that legendary space never grows old.

of those superstars in pop, rock, jazz, and classical music is thrilling, it’s
inspiring; intimidating in the best sense; it makes you want to do your best when you are there. I’m very grateful we’ve had three opportunities to do so.” 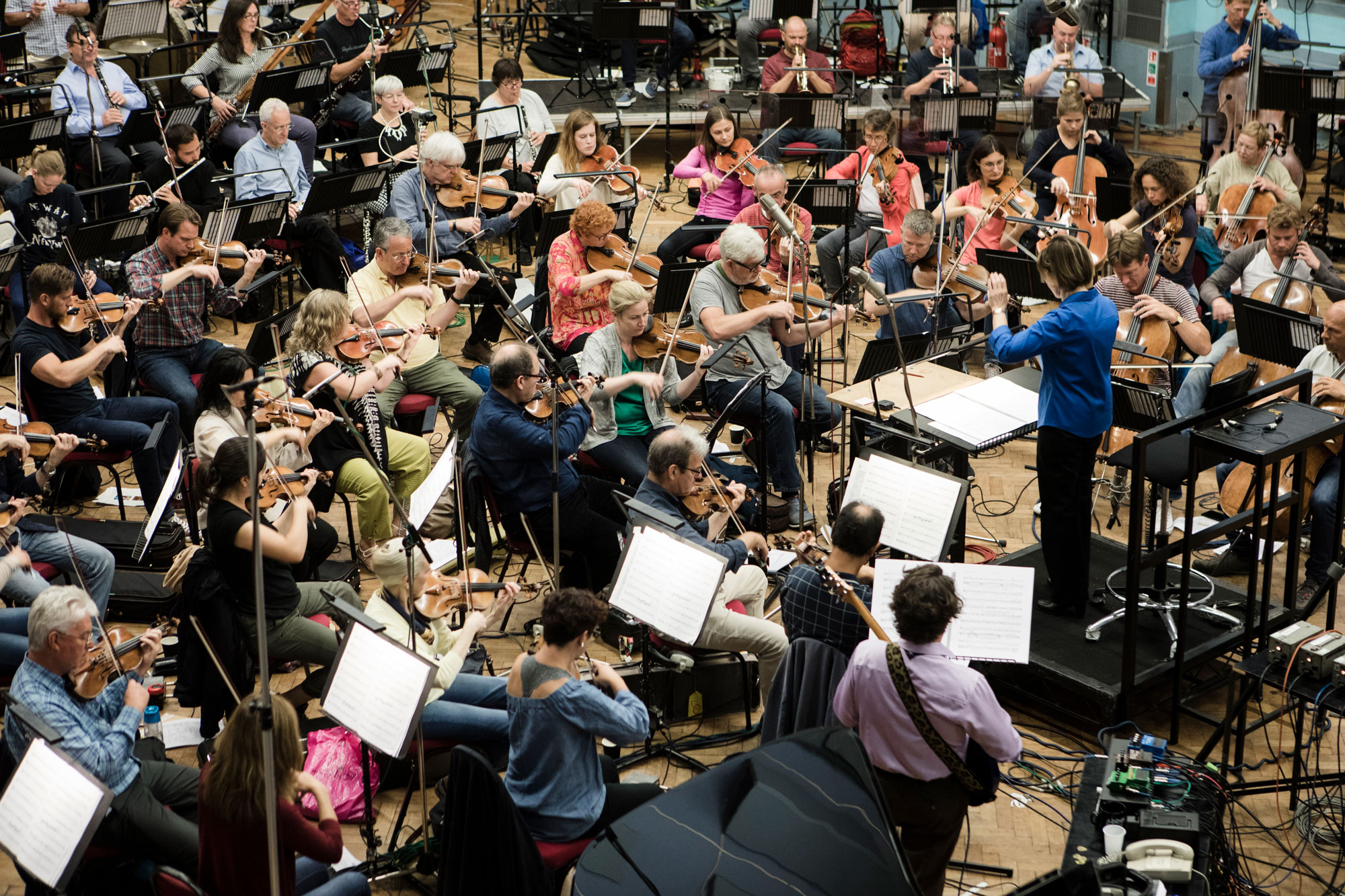 And of course “it all” includes the charmed fourth nomination for this year’s win: the Grammy Award for Best Classical Compendium for “‘Spiritualist’ — Concerto for Piano and Orchestra,” the London Symphony Orchestra’s fifth recording of Fuchs’ original compositions under the baton of Falletta.

“The fact that we have the validation of the voting membership of the Recording Academy for an album of tuneful and tonal orchestral music that is accessible and emotionally direct is deeply gratifying to me,” says Fuchs.

“The Grammy win puts my music in the realm of established American composers whose work will have an enduring influence on American musical composition.”