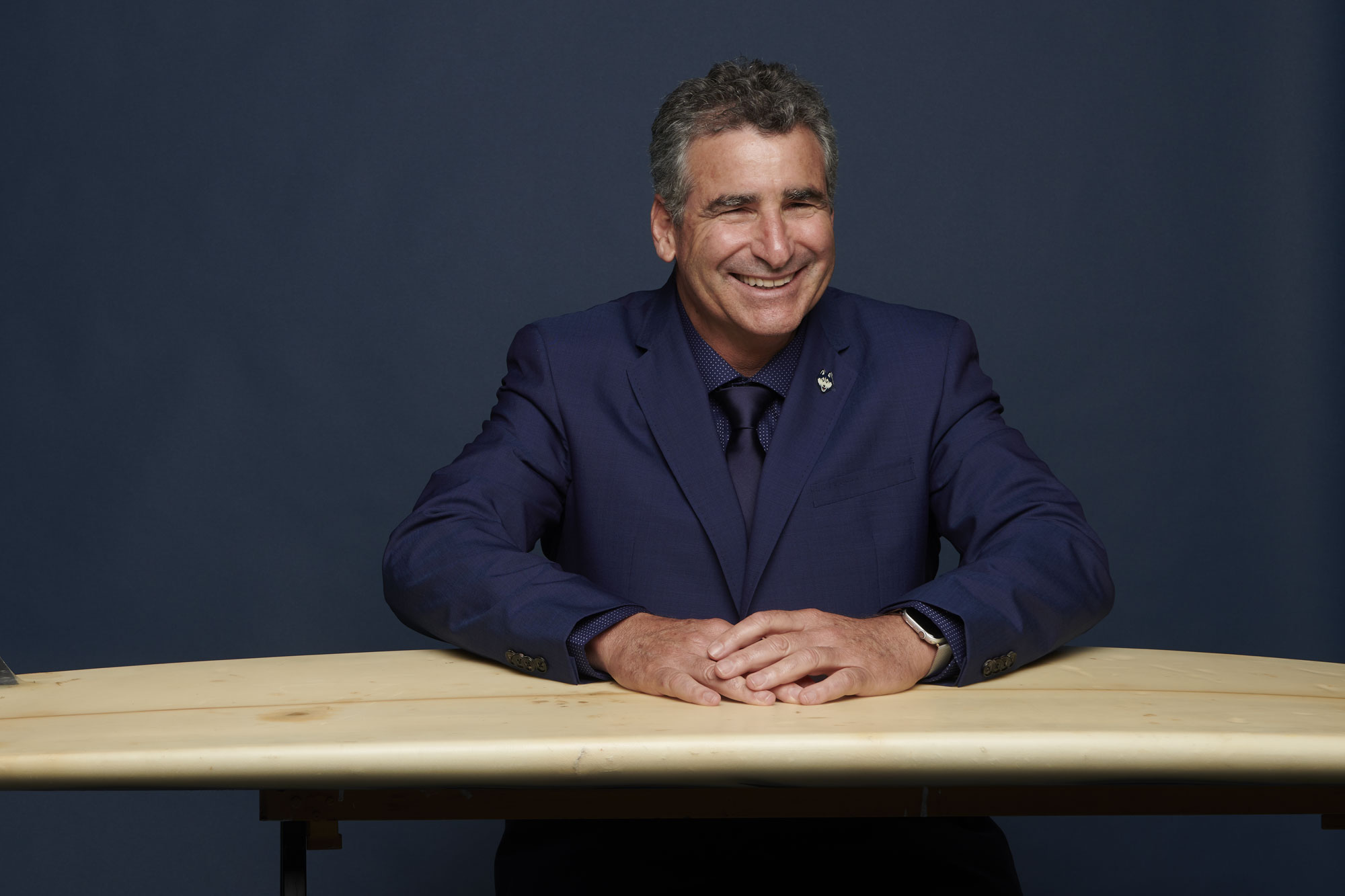 here’s a naturalness to a conversation with Tom Katsouleas, an amiable feeling of picking up where you left off. It’s an innate attribute, one that’s helped UConn’s incoming 16th president make an immediate impression on the countless alumni, students, employees, and others he’s encountered as he prepares to take the helm of Connecticut’s flagship university on Aug. 1.

There’s a naturalness to a conversation with Tom Katsouleas, an amiable feeling of picking up where you left off. It’s an innate attribute, one that’s helped UConn’s incoming 16th president make an immediate impression on the countless alumni, students, employees, and others he’s encountered as he prepares to take the helm of Connecticut’s flagship university on Aug. 1.

He’s incredibly smart, they observe. Insightful without being pedantic. Unpretentious and quick to laugh, but astute in reading the room and going beyond hearing others to truly listening and absorbing what they’re sharing.

Oh, and he can literally save your life. A plasma scientist and engineer with deep roots in research and academics, Katsouleas is also a former Los Angeles County lifeguard and All-American swimmer. He’s an avid sailor, surfer, and water-skier, too, along with being an occasional cliff jumper and a self-described sucker for nonfiction adventure stories in which the main character somehow survives despite all odds.

Leaving his position as executive vice president and provost of the University of Virginia, Katsouleas, 61, arrives this summer with his personalized skateboard and, most notably, a range of purposeful ambitions for UConn’s future as it moves to the next phase of its nearly 140-year history and continues to cement its status as one of the nation’s premier public research institutions.

The new president’s unanimous confirmation by the UConn Board of Trustees followed a highly competitive six-month national search, in which more than 200 applicants vied for the job Susan Herbst leaves to join the faculty after eight years as president.

Katsouleas spent four years at Virginia after serving for seven years at Duke University as dean of the Pratt School of Engineering and professor of electrical and computer engineering. He previously worked at the University of Southern California and at UCLA, his alma mater for both his bachelor’s and Ph.D. degrees. 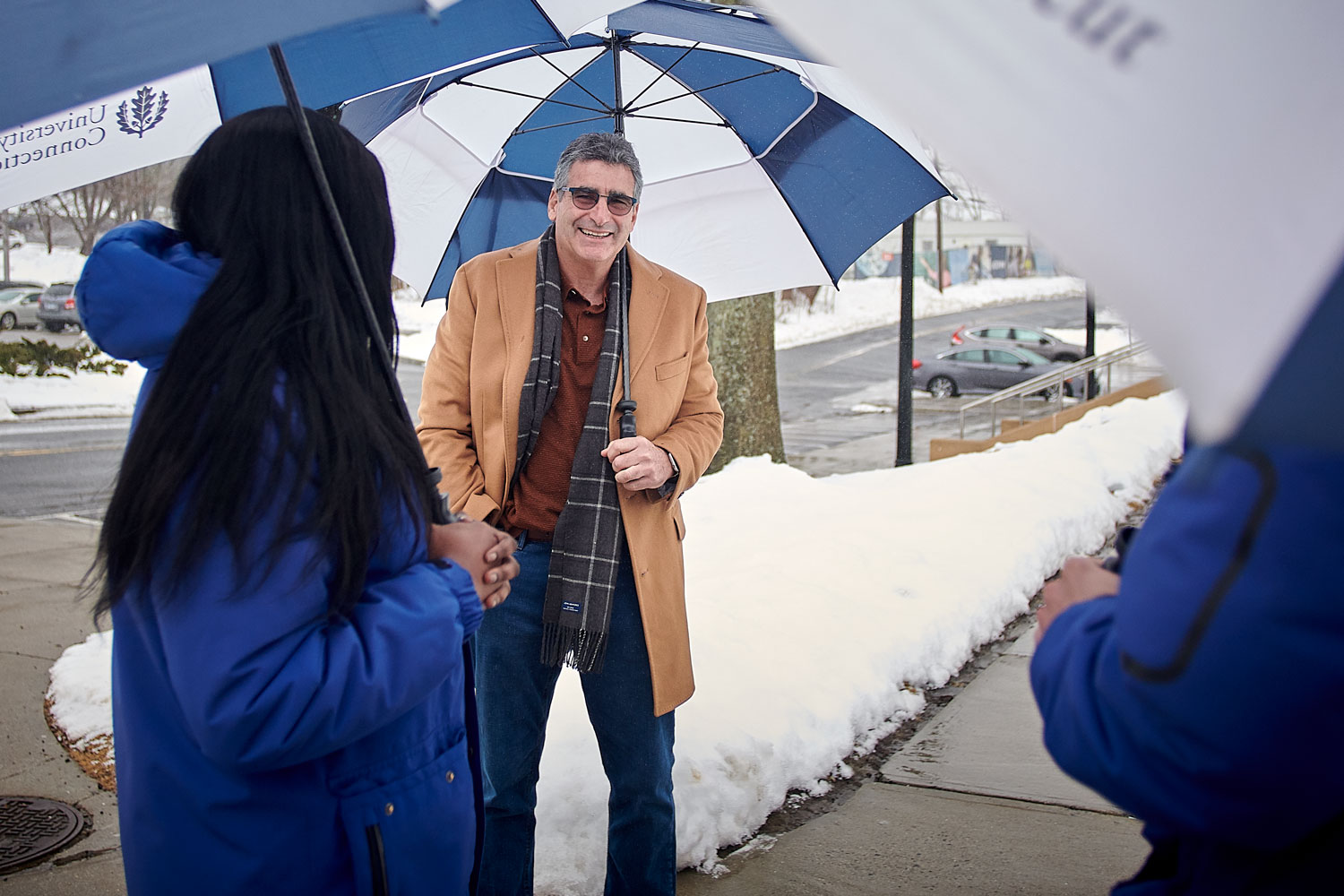 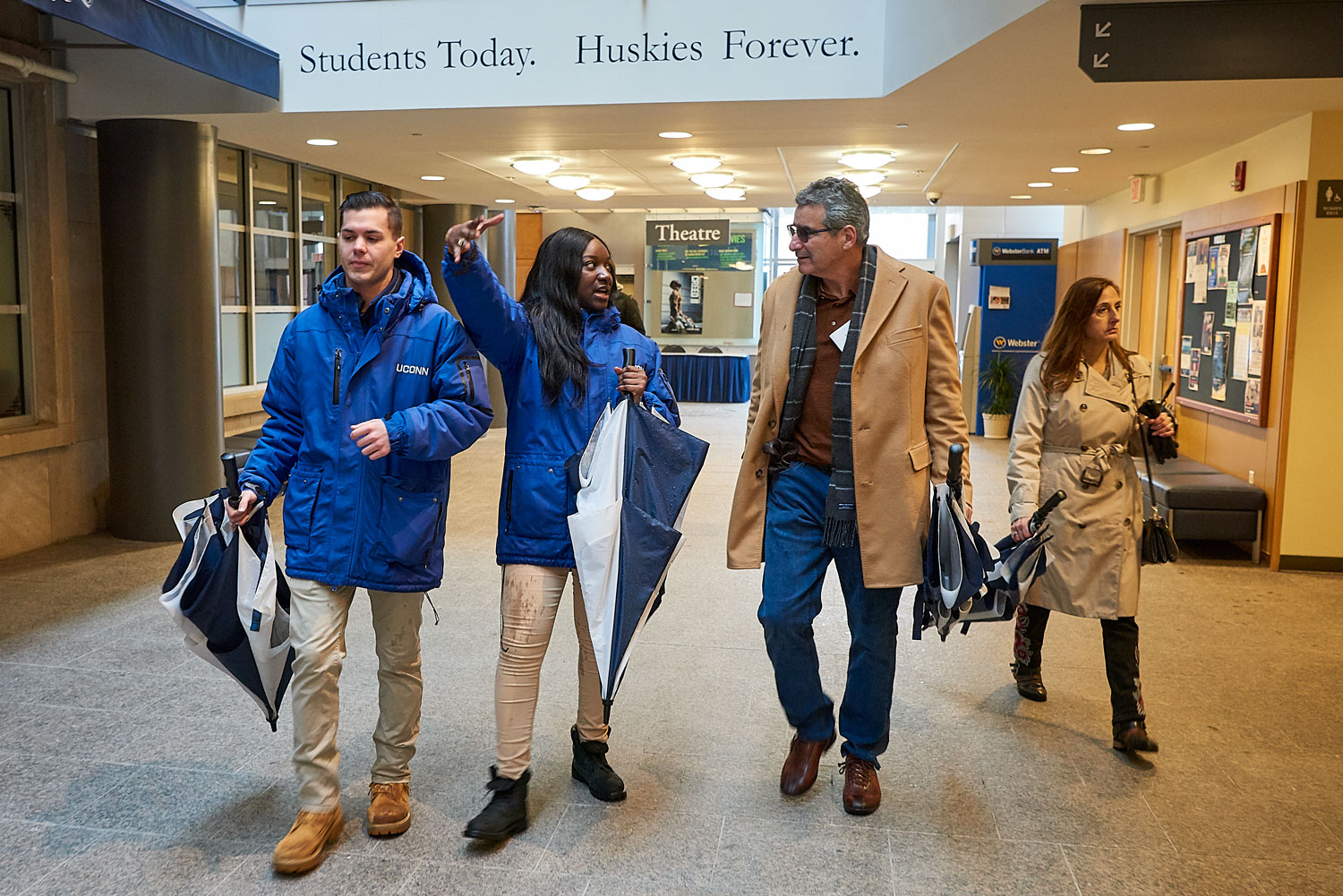 Katsouleas takes a tour of campus with Lodewick Visitors Center staff on March 10, 2019.

He will be joined in Connecticut by his partner, Dr. Anna Maria Siega-Riz, associate dean for research in UVA’s School of Nursing and national expert in nutrition, maternal and child health, who recently was named as the new dean of the School of Public Health and Health Sciences at the University of Massachusetts Amherst.

Katsouleas also has two teenage children and, though he’s resolved to respect their wishes on the colleges they choose, they’re sure to have more than their fair share of UConn gear.

We talk with Katsouleas about what drew him to UConn, his thoughts on higher education’s future both locally and writ large, and his joy at the opportunity to lead a university he has admired since long before last winter, when he visited Storrs for interviews during a swirling snowstorm. 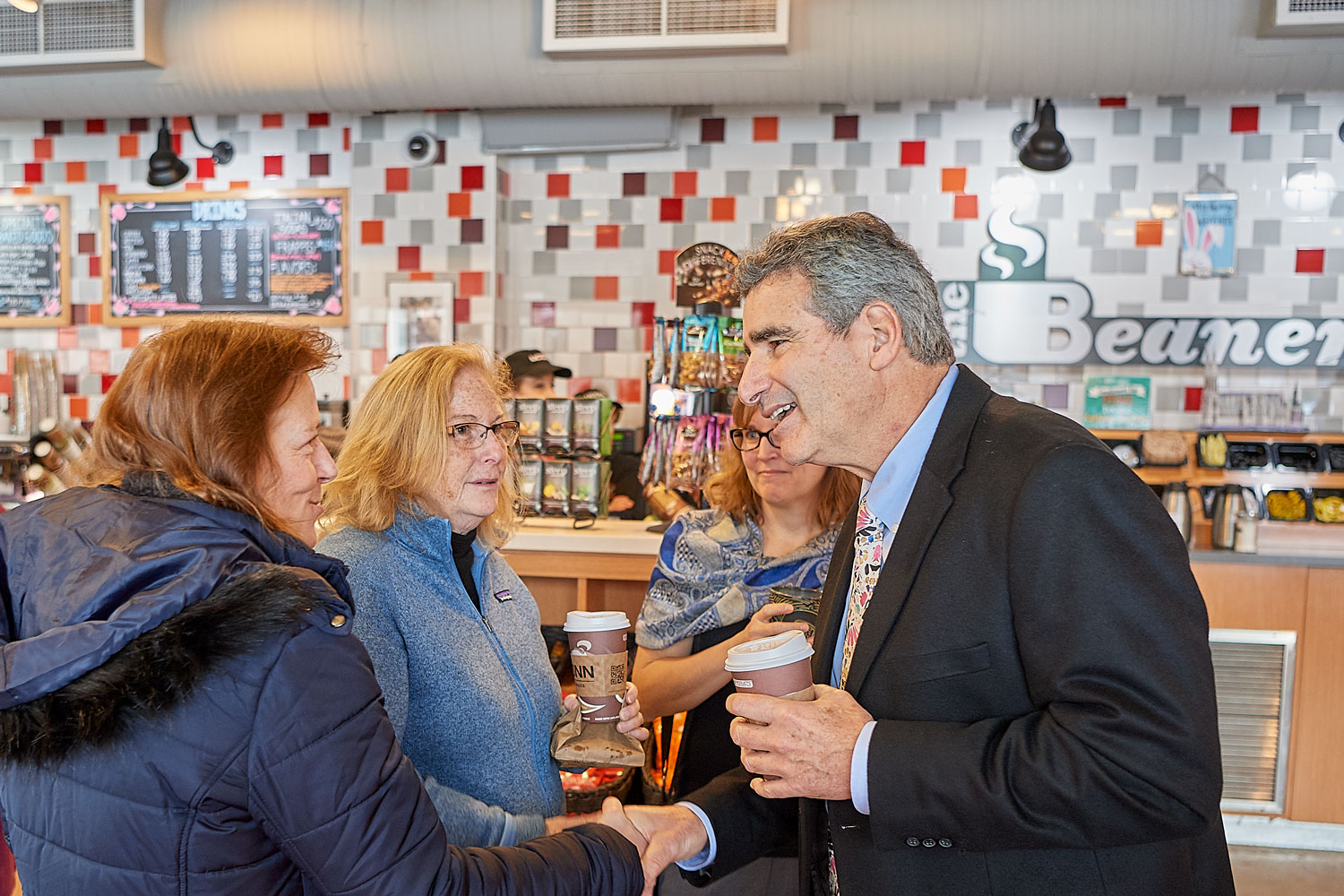 Katsouleas meets faculty, staff, and students at the Beanery on March 12, 2019.

Q:Having worked at public and private universities, what are your thoughts about going into the presidency at a high-profile public institution such as UConn?

The broad mission of a public university appeals greatly to me. All research universities have the role of preparing students for life and careers, and performing research that benefits society. But there’s also a wider scope for the public university that includes uplifting the surrounding community and state, providing greater access to education for citizens from all geographic areas and financial backgrounds, and I find that particularly exciting.

Working with lawmakers is the aspect of this role that will be newest to me, and seeing the extraordinary commitment that Connecticut has made to UConn is really one of the things that attracted me to this leadership opportunity. The legislators I’ve met are interested in more than just providing financial support to the University; they deeply care about being part of the strategy and planning that goes into moving the University forward and, correspondingly, the state. That’s a wonderful thing, and makes me excited to partner and engage with them.

“There’s also a wider scope for the public university that includes uplifting the surrounding community and state, providing greater access to education for citizens from all geographic areas and financial backgrounds . . . ”

Q:Many in higher education say that athletics serve as a “front porch” of sorts that can attract attention, but then draw people’s interest into a university’s many teaching, research, and service offerings. Where do you see UConn Athletics down the road?

You know, many people have sent me messages to offer words of welcome and support, and easily the most common sentiment accompanying that is about UConn’s athletic conference — ideas to improve teams, add new sports or cancel others, and any number of related thoughts.

As I said earlier this year, athletics are part of our identity as a major, broad-context university, and we’re committed to building a culture of winning at UConn that benefits every aspect of the University, including academics.

You’ll see me enjoying a lot of different games. Basketball and football are my favorites, but I also have a background in swimming. I’m looking forward to adding UConn hockey, baseball, soccer, and other sports to my list of regular events. Our student athletes work hard and represent UConn so well, and I’ll be there cheering them on so they know that they have my support and admiration.

Q:You come from an engineering background, so we know your roots are deep in STEM fields (science, technology, engineering, and mathematics). Do you worry about the push-pull that some others believe exists nationwide between prioritizing STEM and humanities studies?

I believe strongly that the growth of STEM actually points to the need for the humanities.
When you think about applying STEM knowledge to societal grand challenges, you very quickly realize technology alone isn’t enough to do it. Whether it’s providing clean water for the billion people who don’t have access to it on a regular basis, or preventing cyberterrorism, or whatever the need is, there’s not only a technical dimension. There’s also a very human dimension in which we as a society have to determine what is feasible, viable, and desirable.

We need engineers who are trained in these technical fields, but we also need them to collaborate with specialists who understand business, behavior, public policy, history, social sciences — the wide dimension of knowledge that’s available at a large university like UConn. 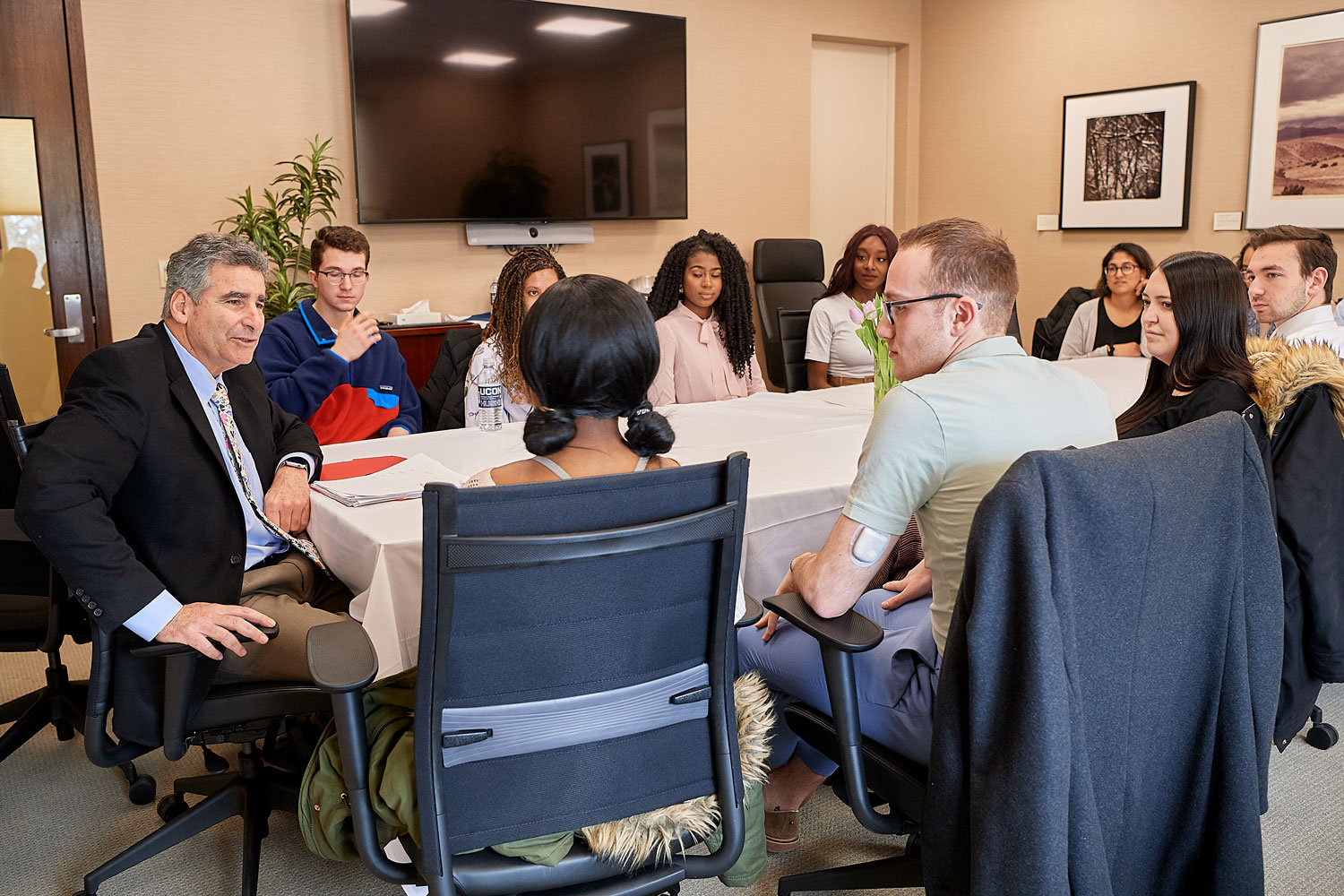 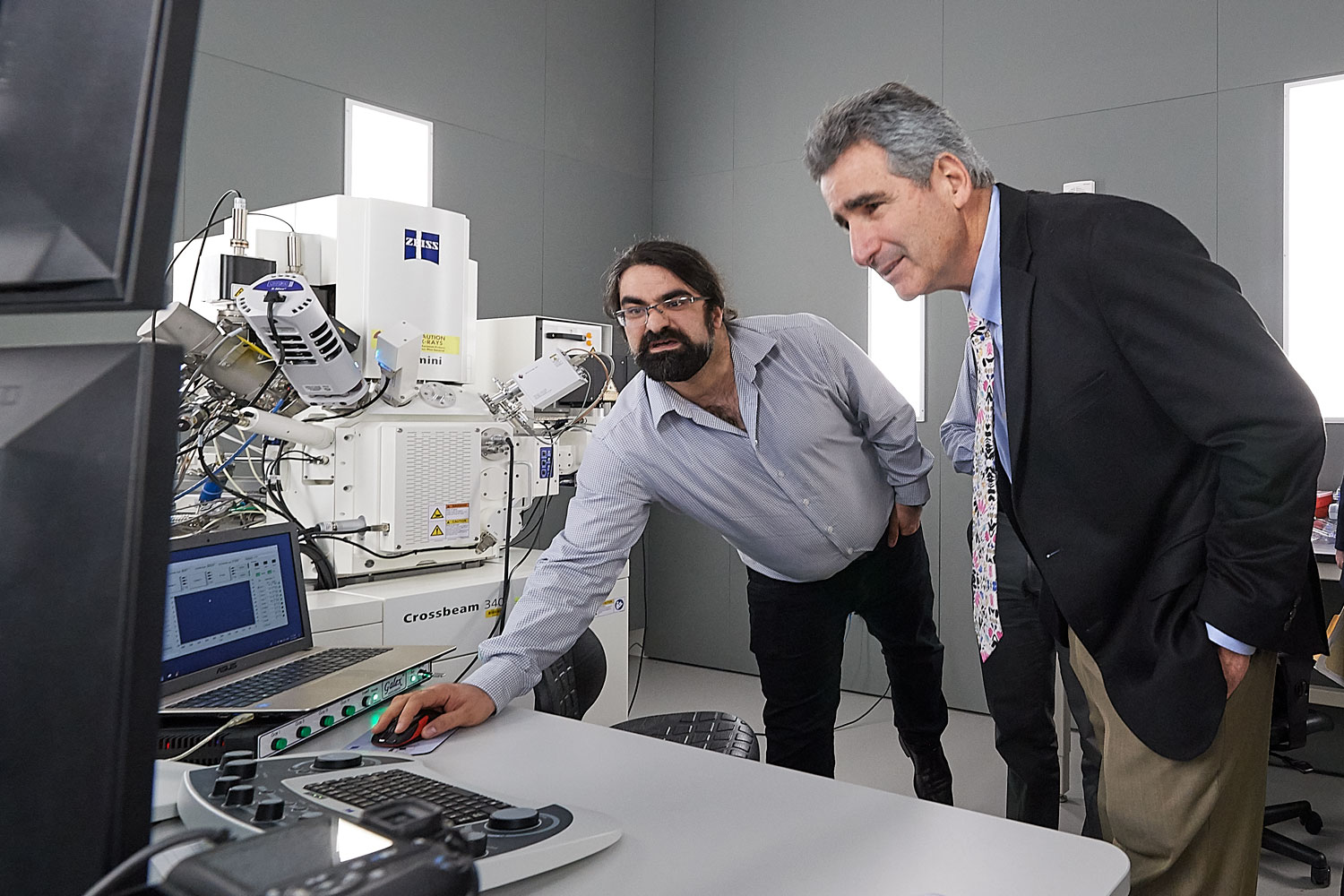 Katsouleas meets with student leaders at the president's conference room at Gulley Hall (left) and takes a tour of the Innovation Partnership Building (IPB) both on March 12, 2019.

Q:The principles of free speech are under pressure at many universities, and institutions including Virginia and UConn have struggled with the difficult balance of protecting constitutional rights while expecting people to adhere to institutional values. How do you view this issue?

Free speech is absolutely essential, and of course we’re bound by the Constitution to uphold it, but even more than that, it’s the basis by which we pursue truth, and truth is the core value of any academic institution. But we have many other values as well, and those include diversity, inclusion, respect, and responsibility. Universities in particular have a special role in society to try and broker the middle ground and navigate in such a way that we uphold all of these values.

Parenthetically, I think it can be harder for today’s generation of students to understand and appreciate the evolution of free speech over the decades, having not grown up with the experience of the 1960s and seeing how important free speech was in bringing about civil rights to people who had been denied them. Instead, they’ve grown up in an era when they’ve seen free speech used to allow people to be hurtful, to add insult or injury to values and people they care deeply about.

When I talk with students, I tell them we’re absolutely committed to supporting free speech, but that they need to remember that just because a person has the right to say something doesn’t guarantee them the right not to be criticized for what they say. The entire community has a responsibility to speak up for what we value, and to speak out when someone says something under the protection of free speech that’s inconsistent with those values.

“Truth is the core value of any academic institution. But we have many other values as well, and those include diversity, inclusion, respect, and responsibility.”

Q:We’re learning more every day about “President Designate Thomas C. Katsouleas.” Can you tell us more about the informal side of yourself, Tom — the water-loving, skateboard-riding, snowboarding dad who’s soon going to become one of Connecticut’s most familiar faces?

My hobbies are anything to do with the water. In fact, there’s a Ph.D. student at UConn Avery Point who was an L.A. County lifeguard like me, and he reached out to invite me to surf with him when I get to Connecticut. I’ve gotten a lot of invitations: the sailing club, the skydiving club, so many other great ones. I’m also really looking forward to UConn’s student programming in the arts and theater, especially any musicals. I feel like the offerings on such a broad-context university campus will be amazing.

Something that might surprise people, and which I don’t really mention much, is that I’ve been playing bridge since I was a grad student. A group of us played every few weeks as grad students and post-docs. We were a little self-conscious about the fact that it was bridge; we told everyone we were heading off to poker night. I’m usually okay at it, other than when I go to a bridge club and a bunch of 80-year-old women kick my butt.

My father was born in Greece near the coast outside of Kardamili and is retired there, so we visit family there every summer and travel around the region, sometimes sailing to various islands. It’s really one of the most remote and rugged parts of Greece, and very beautiful.

We like to do things there like waterskiing and cliff jumping, but my daily routine is pretty simple. One of the best times is when I jump in the water near the beach where we stay and swim about a mile and a half down the coast to our favorite restaurant right on the beach. Anna Maria or my father and the kids bring a little bag with a pair of shoes, a bottle of water to rinse with, and a T-shirt, and they leave it on the beach for me. I swim up, clean up, walk into the restaurant beachside, and eat our favorite Greek food looking out over the water. That’s the idyllic life
for me. 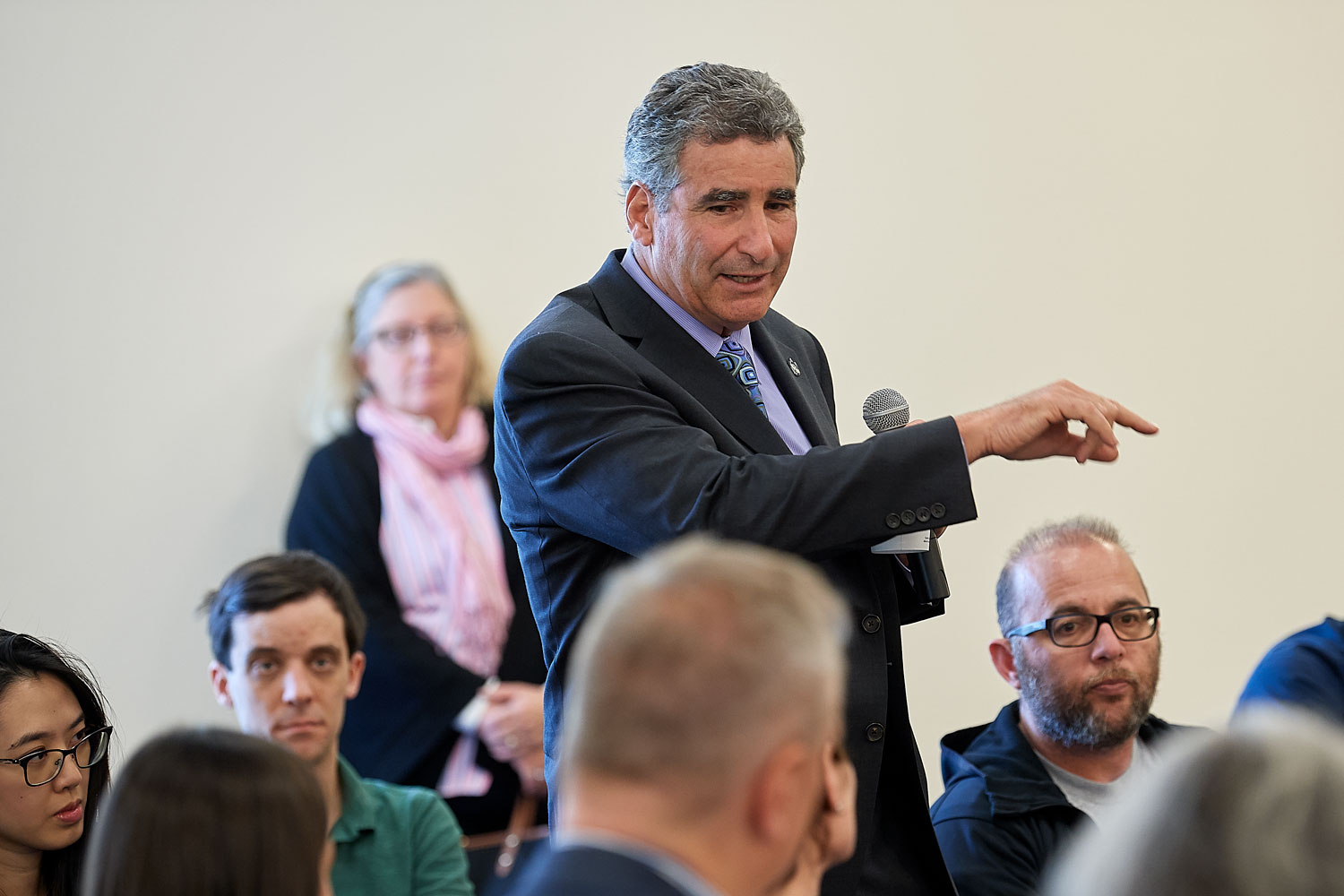 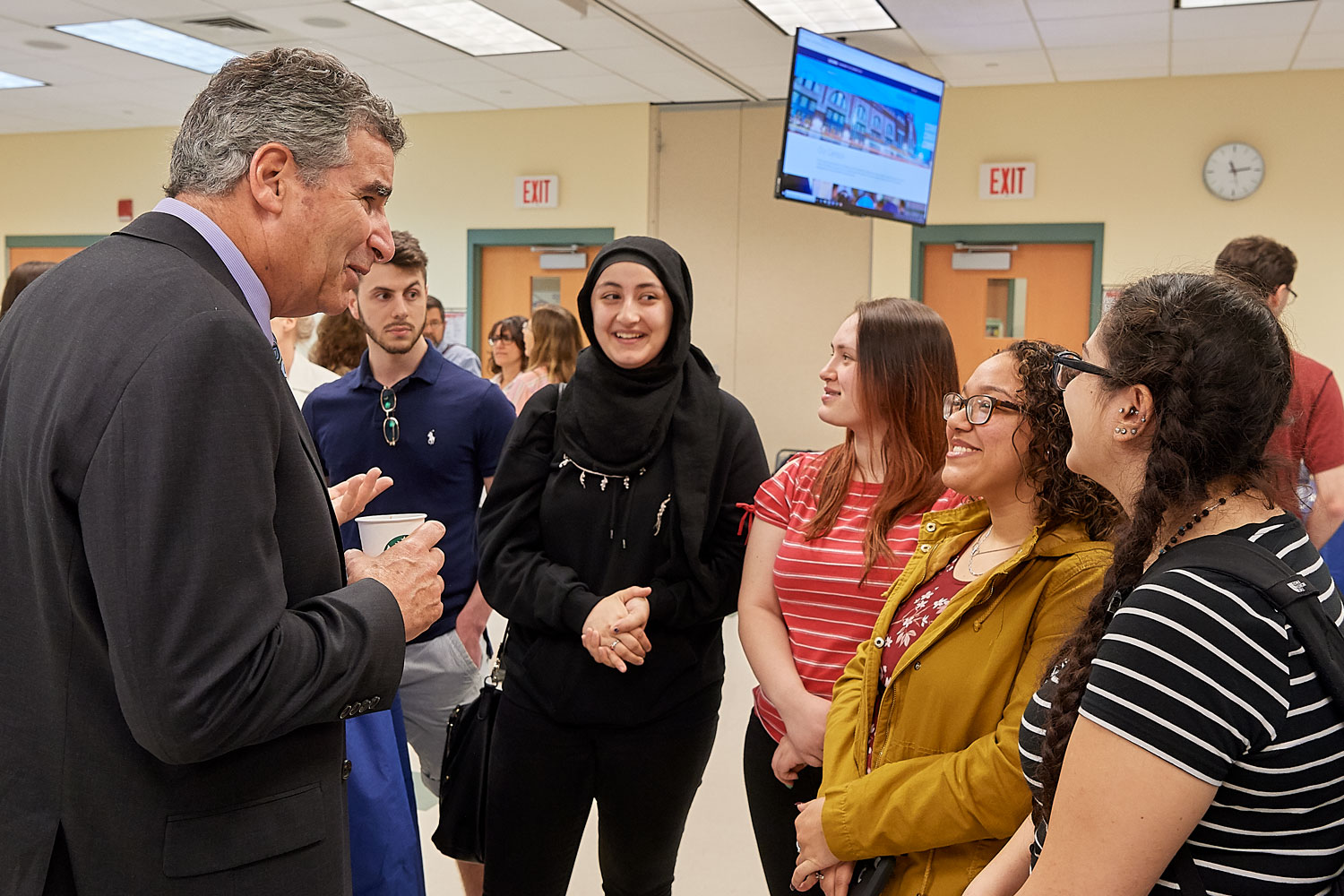 Q:You’re wrapping up your time in Virginia while visiting Connecticut periodically and preparing for all of the changes ahead. How’s that going?

I’ve been overwhelmed with the warm welcome I’m receiving. People have reached out to me since the day of the announcement — not just from the UConn family, but people from around the country who’ve told me about time they spent at the University and in the state. So many of them tell me about how much they love Connecticut and the affection and respect they have for UConn. It’s been universal, and it’s made us all the more excited to be coming.

It’s a humbling experience because as a provost you realize that although you’re in charge of academics at your university, very few people know you on sight. I don’t have a real sense yet of how that will change when I’m walking around UConn’s campuses as president. My hope is that if students and others do recognize me, they will feel comfortable stopping to talk with me or coming by the Benton Museum for coffee with me when I’m there.