Your classmates want to know about — and see — the milestones in your life. Send us news about weddings, births, new jobs, new publications, and more — along with hi-res photos — to: Alumni News & Notes, UConn Foundation, 2384 Alumni Drive, Unit 3053, Storrs, CT 06269.

Robert Neagle ’64 (CLAS) has created and maintains two Facebook groups for discussions and images of UConn radio during the 20th century. Find the groups at The WHUS That Was and UConn Radio Through The Years. He invites all WHUS alumni to join.

Michael R. “Rick” Spinell ’66 (CLAS), an optometrist, was inducted into New York’s Eastchester High School Hall of Fame recently. After graduating from the Pennsylvania College of Optometry in 1970, he was co-investigator for a new soft contact lens and authored the first book ever written on soft contact lenses. He wrote countless articles and research papers during his career, presenting them across the country. He is considered an expert in sports vision and was a faculty member at Pennsylvania College of Optometry, now called Salus University.

James R. Benn ’72 (CLAS) reports that his 13th novel in the “Billy Boyle WWII” mystery series, Solemn Graves, will be released by Soho Press in September. Benn, who was president of the Associated Student Government at UConn Waterbury from 1969 to 1970, is a Dilys and Barry award–nominated author and was recently long-listed for the 2015 Dublin IMPAC Literary Award.

Peter P. LoCascio ’78 (CAHNR), who holds a master of fine arts from the School of the Art Institute of Chicago, reports that his work is part of the Smithsonian Institution Archives of American Art by the Paris Gallerist Darthea Speyer.

Susanne M. Davis ’82 (CLAS) recently released a debut collection of short stories, The Appointed Hour. Set in rural Connecticut, the stories are about characters whose roots run deep in the land. In one story, for instance, a Mayflower descendant wrestles with the legacy of a controversial monument that honors his ancestor. Davis teaches creative writing at UConn and at Trinity College.

Dr. Alan J. Lipman ’84 (CLAS), a clinical professor of psychiatry and behavioral sciences at George Washington University Medical Center, was interviewed by BBC News in February on the causes and consequences of the Marjory Stoneman Douglas High School shootings in Parkland, Florida, and by CNBC News on the mindset of the mass shooter in this and other such tragic national episodes.

Irwin Krieger’84 MSW, of Ashford, Connecticut, published two books in the past year, Counseling Transgender and Non-Binary Youth: The Essential Guide (2017) and Helping Your Transgender Teen: A Guide for Parents, second edition (2018), through the Jessica Kingsley Press. He was also the 2017 recipient of the Lifetime Achievement Award of the Connecticut chapter of the National Association of Social Workers. He has closed his private practice and continues to provide clinical supervision and training for clinicians and educators serving transgender youth.

Leslie A. Imse ’87 MA, MM, chair of the Music Department for Farmington Public Schools, was awarded the American Choral Director’s Association’s Choral Director of the Year 2017–2018 at the Connecticut state conference.

Scott Baker ’87 MBA shares that he is doing a cross-country bicycle ride to raise money for The Fuller Center for Housing, a nonprofit, ecumenical, Christian housing ministry dedicated to providing adequate shelter for all people worldwide. “As crazy as this sounds, this soon-to-be 61-year-old will be riding close to 4,000 miles to bring awareness and raise funds for the poor and homeless with a group supporting the Fuller Center,” he writes.

Eric Stockman ’90 (CLAS) ’94 JD recently founded the law firm of Stockman O’Connor PLLC with offices in Southbury and Bridgeport, Connecticut. He has been named to Connecticut Magazine’s Super Lawyer’s Edition each year from 2007 to 2017.

Joseph Azary ’91 (CLAS) has been promoted to Vice President, Quality and Regulatory at Z-Medica, LLC. He previously worked for Johnson & Johnson, U.S. Surgical, and Fujifilm Medical and owned Azary Technologies before selling it in 2008. He lives in Shelton, Connecticut with his wife.

Cathy Cocks ’93 MA, UConn’s Director of Community Standards, is the 2018–2019 president of the Association for Student Conduct Administration (ASCA). A national organization with about 3,000 members at more than 1,000 institutions, the ASCA is the leading voice for student conduct in higher education.

Daniel R. Blanchard ’93 (CLAS) won a seat on the Mansfield (Connecticut) Zoning Board in November 2017.

Dominick Cristofaro ’93 (BUS) recently was promoted to director of Finance Services for the District School Board of Pasco County, Florida. He started in the district four years ago as a Senior Finance Manager of Treasury.

Tara Mead ’94 (CLAS) is now account director in public relations for Gavin Advertising, an advertising, marketing, and public relations agency in York, Pennsylvania. She segued from a long-time career in broadcast journalism (radio) in 2008 and served in several capacities in media relations and crisis communications before joining Gavin. She lives in Harrisburg, Pennsylvania, with her husband Bill and their children.

Curt Balzano Leng ’97 (CLAS) was re-elected mayor of the town of Hamden, Connecticut, in November 2017 and elected to serve a second term as a board member of the Connecticut Conference of Municipalities.

Simone Morris ’98 MBA recently published her first book, Achievement Unlocked: Strategies to Set Goals and Manifest Them, and it is available on Amazon. Morris, of Norwalk, Connecticut, is CEO of her own company, Simone Morris Enterprises LLC.

Joey Lee Miranda ’00 MBA was appointed secretary of the board of directors for New England Women in Energy & the Environment, a nonprofit organization that aims to harness the passion, intelligence, and leadership experience of women to promote and encourage public interest in the energy and environment sectors. She is a member of Robinson & Cole LLP’s Environmental, Energy, and Telecommunications Group.

Mandy Bundock-Simjian ’01 (CLAS), who was a full scholarship member of the 2001 Big East Champion softball team, was recently inducted into the Lyman Hall High School (Wallingford, Connecticut) Hall of Fame, Class of 1997, for softball. She also recently started a new job working in the Learning and Development Department of Medtronic as a training coordinator.

Pam Malyk ’01 (CLAS), ’03 MA, the University of Florida’s Assistant Dean/Director of Student Conduct and Conflict Resolution, is the 2018 Conference Chair for ASCA’s Annual Conference. A national organization with about 3,000 members at more than 1,000 institutions, the ASCA is the leading voice for student conduct administration in higher education.

Linda Benoit ’03 MSW shared that she has a private practice as a social worker and also works as an addiction therapist. She loves seeing the world and recently attended a conference for student social workers in Mangalore, India, where she gave an address on best practices in substance use disorder treatment.

Dana Balter ’03 MPA is excited to announce she is running for the U.S. House of Representatives in New York’s 24th Congressional District.

Marie Ann Mosher ’05 (CAHNR) has published several books, among them The Secret Ingredient and Beyond Food: The 5 Keys to Kickstart Your Health, which is specifically written for people who have stalled in their goal to optimize their weight and their overall health because of stress. She also hosts thebookbabes.org, a free support community for women authors.

Elizabeth Petrakis ’07 (BGS) reports that she has been the head coach of the West Haven High School dance team for 10 years and her team has competed in the state championships since 2013. Liz is also a personal trainer, group exercise instructor, and therapeutic recreation director and says she loves working with clients of all ages, her oldest being 103.

While studying during finals week of 2006, Chris Hall and Meg Burns, both ’08 (CLAS), met at Homer Babbidge Library. A decade after graduation, the Halls are proud to welcome their daughter and future Husky, Nell “Nellie” Marin Hall. They are excited for Nell’s first trip to the Dairy Bar this summer!

Holly Wonneberger ’14 (CLAS) and Christopher De Marchis ’13 (CLAS), both English majors, got engaged at UConn in November 2017 and set a July 20, 2019, wedding date. They met in the fall of 2011 and became friends when they both enrolled in back-to-back English courses: Honors Medieval Literature and Intro to Literary Theory. After graduating in 2013, Chris took a graduate publishing course at Columbia University’s School of Journalism and started a career in publishing at Rodale Books in New York City. After Holly graduated, they started dating. But then Holly moved to Washington, D.C., to start law school at Georgetown University and Chris went back to school to earn his master’s in from Columbia University’s Teachers College. After three years in a long-distance relationship, they both moved back to Connecticut. In November, while taking a walk around campus, Chris proposed to Holly on the quad of South Campus where Holly lived as a student. For a list of UConn alumni and faculty obituaries, visit uconnalumni.com/category/class-notes/obituary.

Ray Neag ’56 (CLAS), of Goshen, Connecticut, and Wyomissing, Pennsylvania, a philanthropist who built his fortune in the medical device industry, died Thursday, April 19, at age 86. He died at home with his wife, Carole, by his side.

Carole and Ray Neag are among the most prominent benefactors in UConn’s 138-year history, next to brothers Charles and Augustus Storrs, who donated the land and funding in 1880 to start the University. In 2001, Ray received an honorary degree from UConn.

“Ray Neag had a profound impact on the University of Connecticut and our entire state. With his first record-breaking gift to the Neag School of Education to his generous support for life-saving care at the Carole and Ray Neag Comprehensive Cancer Center, the Calhoun Cardiology Center, and many other programs, he played an incredibly important role in our history,” says President Susan Herbst. “He keenly understood UConn’s potential to be a top public research university and academic medical center, and how to build the momentum to get there. Ray was a visionary who advocated tirelessly on UConn’s behalf and inspired so many other alumni to follow his lead.”

As UConn’s largest donors, the Neags transformed the Neag School of Education and the Carole and Ray Neag Comprehensive Cancer Center and made significant contributions to many other programs. Their legacy, however, bespeaks more than philanthropic generosity. Through a deep connection to the institution and the UConn community, the Neags helped raise UConn’s national profile and elevate the UConn Foundation’s fundraising operation. Neag was a visionary foremost. He approached philanthropic pursuits using the same acumen that enabled him to build a small medical device company that manufactured hypodermic and textile needles into a pioneering manufacturer of cardiac surgery devices, including, in 1978, the first polyurethane catheter, which is widely used today.

In a 1999 interview with the Hartford Courant, Neag explained the timing of his $27 million gift (including a $4 million match from the state), which was at the time the largest gift ever to a public university in New England and the largest gift ever to a school of education in the country. He said, “I worried about the commitment of other people to the University, but I could see it was starting to happen.” 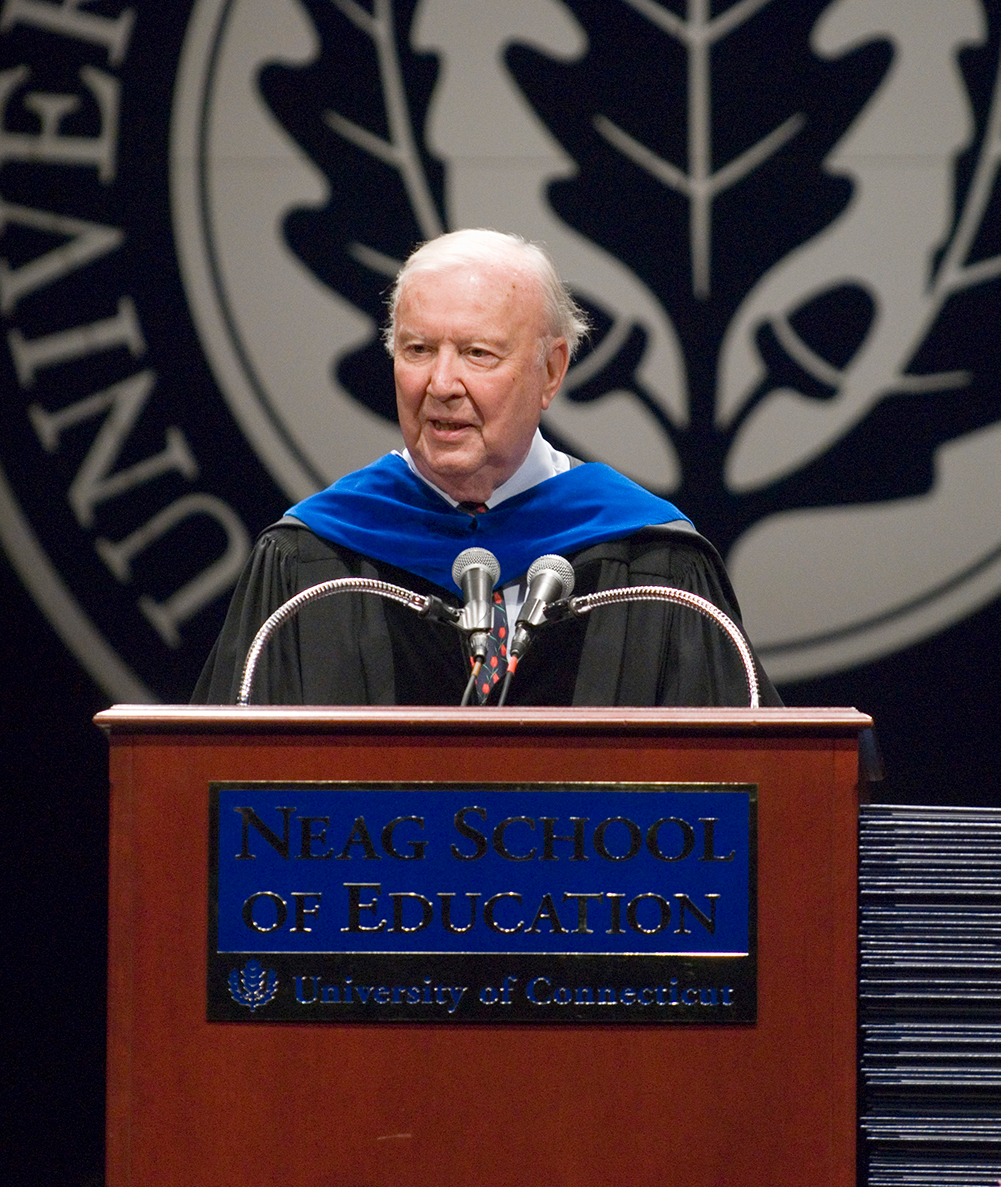 Neag at the 2007 School of Education commencement

Your classmates want to know about the milestones in your life. Send news about weddings, births, new jobs, new publications, and more to: alumni-news@uconnalumni.com