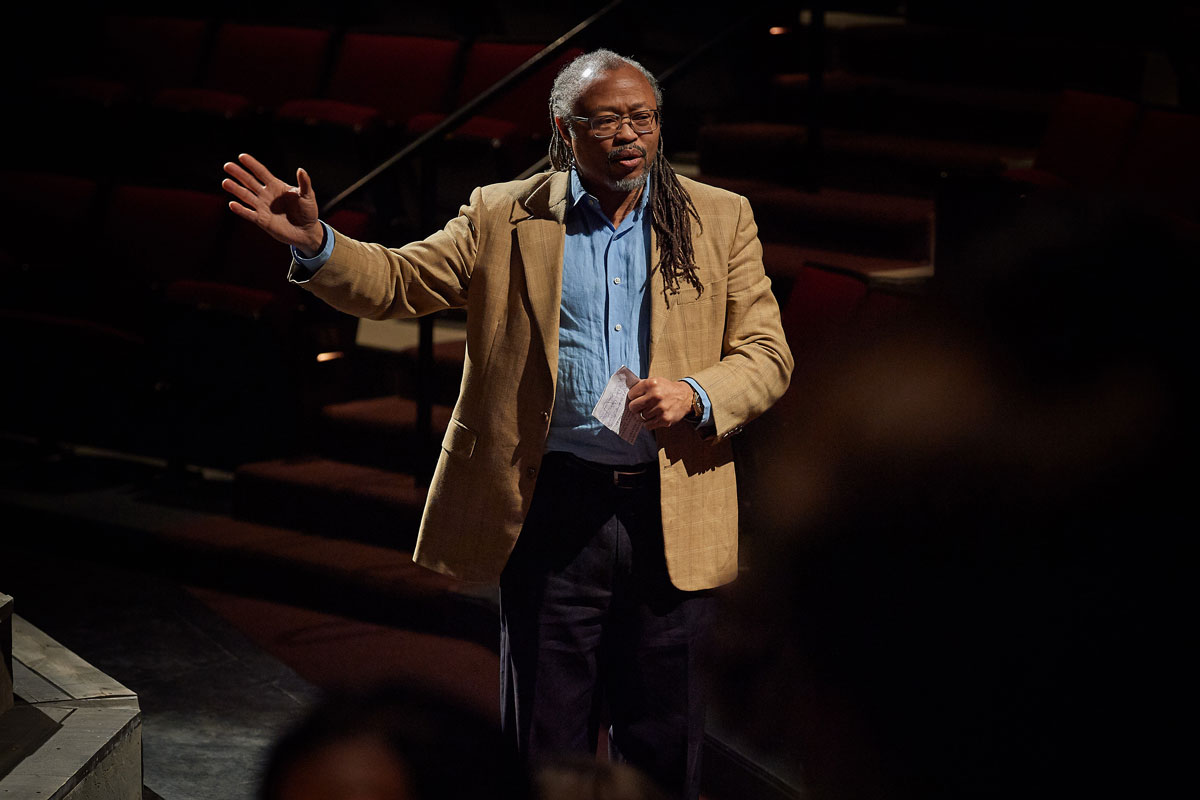 “After that night I thought, ‘I didn’t know people really did this, and this is what I want to do,’” says Michael Bradford of the first time he saw live theater. Now head of the Department of Dramatic Arts in the School of Fine Arts and artistic director of the Connecticut Repertory Theatre, Bradford ’98 (BGS) was then a systems operator in the Navy.

Bradford grew up in Arkansas City, Kansas, and later moved to San Jose, California. He remembers reading stories about American history and the African-American poetry of writers such as Gwendolyn Brooks, Nikki Giovanni, and Sonia Sanchez that he found in books collected by his mother. He wanted to become an English teacher.

“I thought, ‘I’m going to write the great American novel,’” he recalls. “When I started reading those works, I thought, ‘Poetry is where I really want to live.’ I wrote a lot of bad poetry in those days, but I loved it.”

No one in his family had ever gone to college. After high school, Bradford sold encyclopedias, worked in fast food restaurants, and then had a series of jobs through an employment agency in San Jose, where he told the person in charge of hiring that he liked to read and write. “She said, ‘This is not a brainpower job,’” says Bradford, with a smile.

Having initially turned down an invitation to join the U.S. Navy from a recruiter he met during a chance encounter, Bradford reconsidered, wanting that “brainpower job.” He enlisted.
It was during a posting in Seattle, while on a date, that he ended up at the theater. He wanted to see a jazz quartet, but his date had tickets to see “Ma Rainey’s Black Bottom,” August Wilson’s landmark play about the African-American experience in the 20th century. For Bradford, the performance was life changing.

“Thank goodness I was in the military because I don’t know if you know, but every base seems to have a theater. And rank doesn’t matter, none of that matters.” You could just go in and say you were an actor or a playwright and they’d invite you to act or write, he recalls. “I had five or six years where I was just living in community theater on bases.”

After one rehearsal in Bangor, Washington, he told the director of the play he was working on that he was a writer. Though he had never written for theater, he turned one of his short stories into a play and then continued to write as he moved to new postings.

“You need a scuba tank to listen to and read Shakespeare — because that brother is diving for the bottom of the ocean.”

By the time he arrived at what would be his last post, the U.S. Submarine Base in Groton, Connecticut, Bradford was married with a family. He took advantage of an early release program from the Navy, was hired by Electric Boat, and started taking classes at UConn Avery Point, where he earned his undergraduate degree. Bradford then enrolled in an MFA program at Brooklyn College, where he commuted three days a week while also delivering newspapers, working at Home Depot, and teaching writing at Avery Point.

A reading of one of his first plays, “Living in the Wind,” at the Eugene O’Neill Center in Waterford resulted in a meeting with an Off-Broadway producer and a staging of the play. He went on to write plays, read, and perform in New York City, elsewhere around the U.S., and in the United Kingdom, Spain, Portugal, Romania, and Cuba.

Serving as department head since 2016, Bradford teaches classes in theater history, dramatic literature, and playwriting. He received a Research Scholar Fulbright to Granada, Spain, and continues to work with the nonprofit Lark Play Development Center in New York City. His plays have premiered in Chicago, Seattle, London, New York City, and at the Connecticut Repertory Theatre. His most widely celebrated work is “Olives and Blood,” which highlights the life and controversial death of Spanish writer Federico García Lorca.

Bradford works with students in the Nafe Katter Theatre during a playwriting class.

Q. You’ve said you don’t like directing your own work. Why?

A. What I have on the paper is not a fait accompli. When there is a director in the room, that director is challenging me. We go into the rehearsal process and the director is still saying, “I can’t get that moment to work; I need something else from you.” That would not happen were I directing my own work. The actors are questioning the work. The director is questioning it. They’re being critical because they want clarity. It’s just so dynamic.

Q. Your writing is likened to poetry, not unlike Shakespeare’s plays that are written lyrically about history. Do you agree?

A. The meter of Shakespeare is something I’m probably not thinking about, but the way he turns a phrase, finds the exact word or words to explain the complication of this moment in a really simple way — “my heart is figured on my tongue” [Richard III]. That’s as good as it’s going to get. We don’t want everyday conversations on the stage. We can live that and have it in our lives. You need a scuba tank to listen to and read Shakespeare — because that brother is diving for the bottom of the ocean. It’s language that I find to be at the top of the game. I don’t know that it’s ever been bested by anybody. I love [Ernest] Hemingway, but even he couldn’t come close.

Q. What is your process for writing?

A. I’m not a writer who can jump about in the play. I have to write the play from the beginning to the end. I will try to knock out five to ten pages at a sit. The next time I sit down, I go back about five pages, read what I have written, don’t make any corrections, but put a mark next to something I want to address. Then I try to knock out another five to ten pages, keep going back a bit, and move forward. Hemingway said to always leave something in the well; never stop when the well is dry. I always try to stop when I know what the next line is going to be, and come back to it the next day. I put it down for a month when I’ve finished the first draft.

Q. How significant is it to you to have your work performed outside of the United States?

A. I’m honored. I may be talking very particularly about these African-American vets returning from World War II somewhere in the South [in “Willy’s Cut and Shine”], but the situation that they find themselves in has a humanist universality that somebody in another country can glom onto; that’s when I feel I might have written something that could stick around.

Q. As head of the Department of Dramatic Arts, what are you hoping to provide for your students?

A. I want our students to be in tune and in relationship with the small number of people that are in the rehearsal room, to recognize the experience and to take full advantage of the experience and professionalism of the equity actors.

What is it to not only learn the craft but to operate as a professional? What is the hierarchy in the rehearsal space? What kind of conversations should you have or not have with the director that you’d like to work with? We’re working with the curriculum to get some of that course work in there so our students are a bit more comfortable graduating.

There’s a lot of actors going out into the world queuing up for the same audition. What gives you a little more knowledge, a little better way to map out your career as you leave here? All of those things are important to me, those practical ways of operating in the world as an artist. If you can get the craft down, we can make you a consummate artist; then you have to know how to apply it, where to apply it.

Academically we just need to challenge ourselves to be on point. You always have to have foundational courses. The work is moving forward out there. Technology is a great part of that work, and we need to get on board on the tech side, design side, the dramaturgy side.

Q. The resources available at UConn are unique for a theater department, including music, art, digital media, and puppetry. What does that mean for the future?

A. It’s unbelievably exciting. We just got a new head of Digital Media and Design [Heather Elliott-Famularo]. We’ve been in conversation about who we’re sending over there for their digital filming and green screens, who they’re sending over here to support our projection work. The interdisciplinary work is really exciting. I’m fascinated by it. A lot of that work is starting to bubble up.

It’s not only within the School of Fine Arts. We have some engineers over in our design program helping to build sets by engineering mechanical things. We’re starting to stretch out a bit more than we have in the past and have conversations with others. We’re doing a lot of reaching out to STEM folks. We can all benefit. It’s an exciting time.

Q. What has surprised you about taking over the department?

A. I came in the door with all these ideas about the kind of theater I’d like to see, the kind of opportunities to give our students, shifts in the academics to open up more time academically, and issues of diversity.

No matter how much you don’t want to think about money, you cannot not think about it. I can’t be egotistical or arrogant about what I’m going to put into our season when our subscribers are going to rebel against it and we’re not going to have enough budget to give our MFAs what they need for their thesis projects.
It never crossed my mind.

I tell our students we’re a big ship, and big ships move slow. You turn that wheel too fast and you’re going into the ocean. But at the very least, you’ve got to turn the dial to start the turn. In my first year, we’ve turned the dial. Don’t expect big changes yet, but we’ve turned the dial.