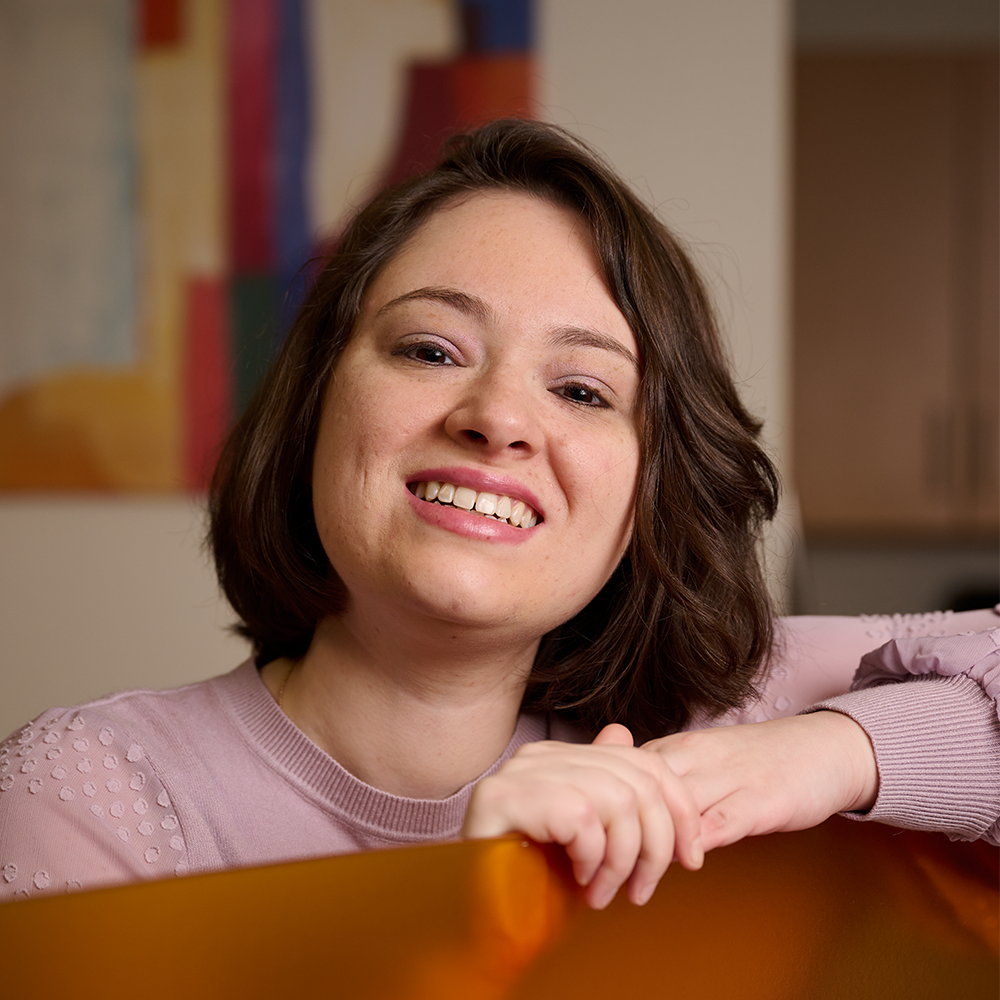 Amanda Brenner at UConn’s School of Social Work in Hartford.

Amanda Brenner ’22 MSW has always been a dedicated and accomplished student – she makes good grades, won her college’s award for best undergraduate research paper, and received a grant from the Special Envoy for Health at the United Nations right after she graduated from American University in 2016. She majored in foreign policy, landed a great job a year after graduation, and was preparing to launch her career in international relations.

“I’ve always loved policy,” she says. “I always thought that was a way that you could be a very useful person, and feel like you’re useful, by getting involved in policy work.”

Years later, and a recent UConn policy practice Master of Social Work graduate, Brenner is still working on policy, but it’s an extremely personal mission — she’s hoping her lived experience can give others hope, while helping to reduce the strong stigma that exists around severe mental illness.

Brenner was a first-year undergraduate when she started feeling ill.

“I felt like I had a cold, and I didn’t know what it was — it was persistent and very frustrating,” she says. “It sort of progressed from there, where first I started feeling just a little bit physically sick, and then it became having weighty thoughts about things like purpose and not understanding why I had this sort of existential dread. And then it shifted into this kind of just straight-up sorrow. And eventually it was much more than that.”

She went to the campus clinic but didn’t seek out additional treatment or therapy and continued to struggle, not understanding what was happening to her. She struggled as she studied abroad in South Korea, seeking out doctors who were unable to diagnose her with any physical illness. She struggled as she completed her undergraduate degree and looked for a job in the competitive world of Washington, D.C., politics and policy. When Brenner finally landed that job, she struggled even harder.

“I had my first full-time job in international relations, and I suddenly couldn’t get out of bed,” she says. “I was so upset with my inability to work and the quality of my output that I just didn’t want to do it at all, but mostly it was because I felt so physically awful that I just couldn’t see how I could continue to go on day by day. It really became sort of a disability, and it is a disability, but at the time, I didn’t realize that.”

She eventually quit and moved back to her parents’ home in Shelton, Connecticut.

She also met others who were living with mental illness, which helped her feel less alone, but the benefits of the program didn’t last. She was hospitalized, then hospitalized again, and again, eventually diagnosed first with severe, then later recurrent, major depressive disorder. None of the treatments were helping.

“I didn’t want to live, and it wasn’t like I hated myself,” Brenner says. “It wasn’t that type of suicidal thought. I was in so much pain, and I couldn’t do anything about it, and I did not know how I could continue to the next day. I was in the hospital three times without making any progress. I had tried every type of medication under the sun. I tried all kinds of talk therapy. Like I was a dedicated student, I was a very dedicated mental health patient, where I was like, ‘I’m going to get to the bottom of this. I’m going to figure this out. There’s got to be a way to figure this out. It has to get better.’ But at one point I stopped believing that it was going to get better.”

Living with severe mental illness, she explains, is like running a marathon that has no finish line: You’re exhausted, you’re uncomfortable, and you’re in so much pain.

The finish line that finally came for Brenner was a very unexpected place —electro-convulsive therapy (ECT) or induced, controlled seizures. “I thought it sounded really scary,” she says. “But it’s an evidence-based practice. It really makes a difference in cases where nothing else has made a difference at all over time.”

Brenner underwent ECT for months without feeling any better. And then, everything changed.

“It was so very sudden, after receiving ECT — and they said it could happen like this — but all of a sudden, the pain stopped,” Brenner says. “It just stopped completely. It was just gone. You wake up one day, and this thing that has been with you for years and years — suddenly it’s gone, and it’s just the most shocking thing.”

While Brenner is quick to say that ECT did not cure her mental illness — it did not end her worry or her existential dread, or change her thinking patterns — the physical pain that had been unsolvable for so long was gone. She began to reimagine the rest of her life, filled with gratitude for the support and care teams she had garnered along the way and motivated to use her talents to contribute to the well-being of others.

“I was so inspired by the people who were good — the people who were amazing and empathetic and so human and kind and compassionate — that I wanted to go into this field myself,” she says. “I want to amplify the voices of people with severe mental illness, because they have their own voices. Everybody has their own story.”

She continues, “I really wanted to do policy and study mental illness at the same time, and I found that you could do that in a study program like the one at UConn.”

Students engage in robust, hands-on fieldwork placements designed to offer critical experiential learning opportunities. It was this approach to these all-important field placements that made UConn the perfect fit for Brenner.

“They have such a wonderful field department, and they really care about what you want in your internship experience,” she says. “The first year, I said I wanted to work at either the American Foundation for Suicide Prevention or the National Alliance on Mental Illness [NAMI], and they said, ‘We can make that happen.’”

Brenner worked with the Connecticut chapter of NAMI in her first year. She did a lot of writing — preparing briefing books and background papers, but also writing and delivering testimony on legislation before the Connecticut General Assembly.

“That was a big experience, because I finally felt like I had my platform, and I could stand up and bring my lived experience to the table,” she says, “because I think that’s important. We’re often left out of the conversation.”

Brenner also trained as a NAMI “Ending the Silence” presenter, where volunteers engage with children to discuss their experiences with mental illness and help end the stigma that surrounds it. For all of her work and her efforts, NAMI Connecticut recognized Brenner with its 2021 Stigma Buster Award.

Brenner finished her MSW this spring and hopes to return to Washington, D.C., to work on policy at the federal level.

“I want to go back and come even more full circle, and work in D.C., and talk on the national level, and bring my story to a wider audience,” she says. “Because I want to reach as wide an audience as possible. I want people to understand that you can fight the stigma that is out there. You can fight the possibility that you feel like there’s no hope.”