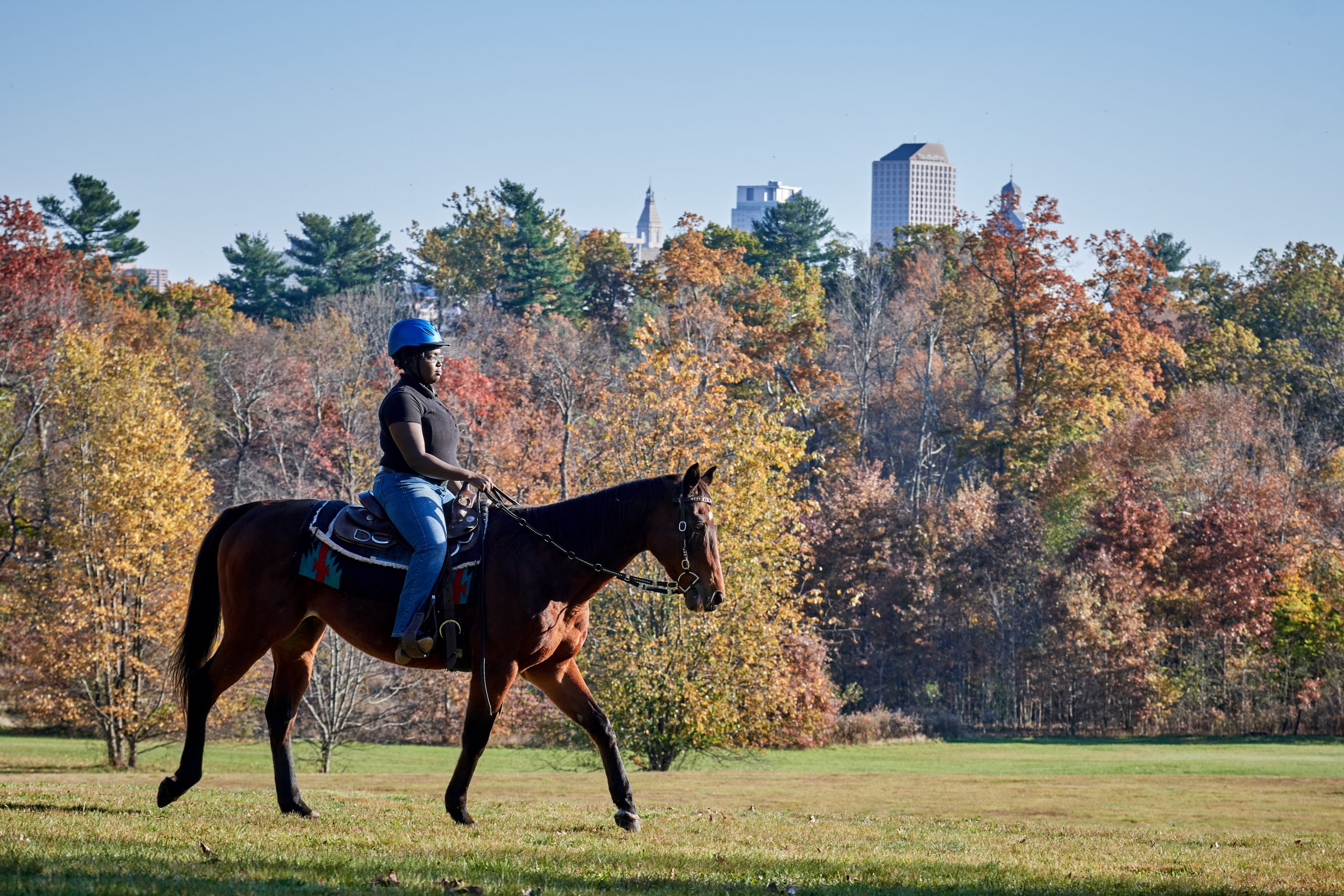 When LaShawnda Phillips ’20 (RHSA), ’22 (CAHNR) first moved to her neighborhood in Hartford in 2013 at age 13, she set out to do some exploring. “I took a walk at that time, just looking around the area because I didn’t know Hartford at all, and I looked across the street and found horses,” she says. “I remember thinking, ‘They’re so big.’ I’d never actually seen one in person before.” 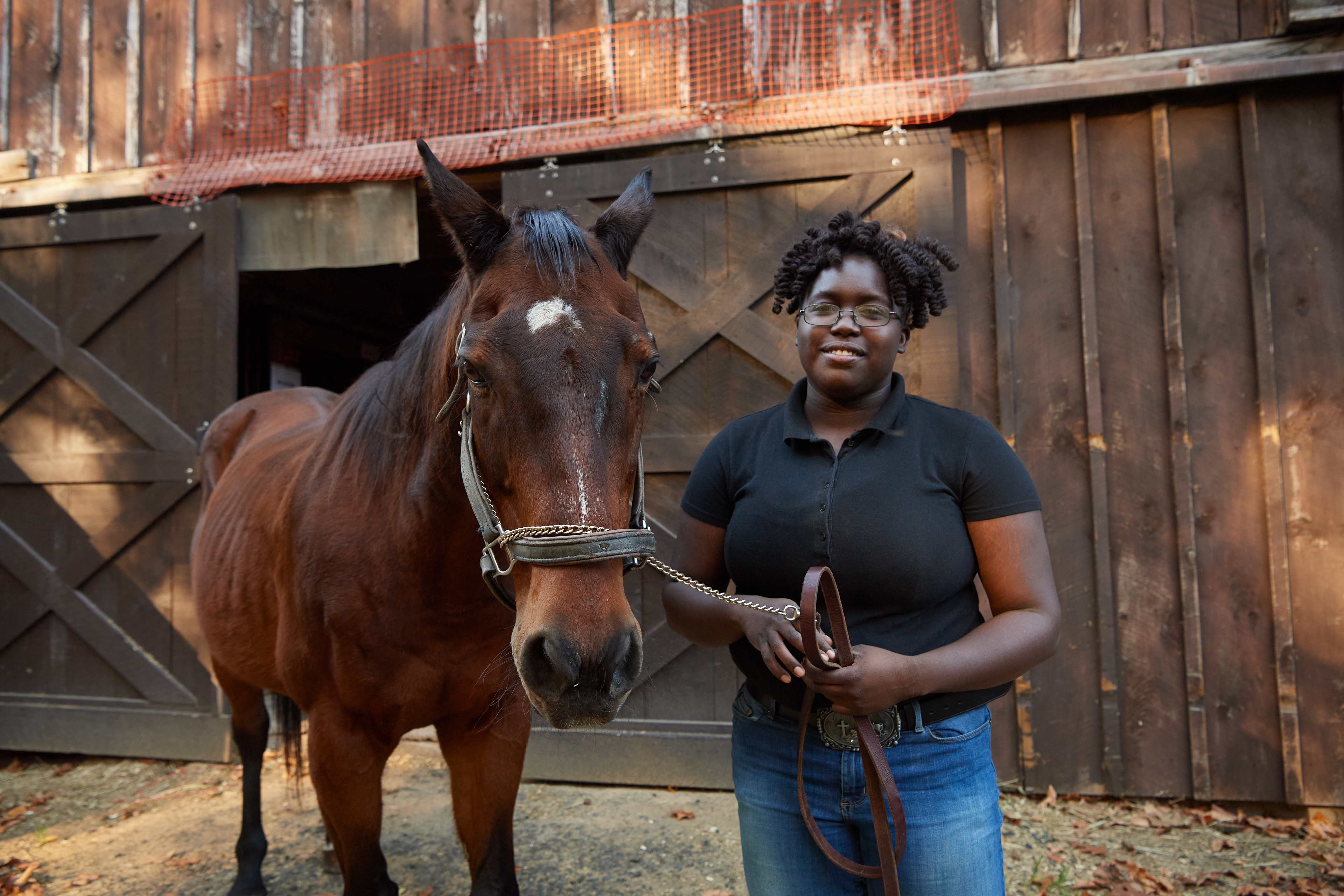 Phillips and Handsome at the Ebony Horsewomen barn in Hartford.

The second oldest of nine children whose mother was battling mental health issues, Phillips says the pressures of school and family life were taking a toll on her. “I was shy and nervous, I didn’t like to share my struggles at home and my background, so I would just keep it to myself,” she recalls.

Those horses across the street turned out to be her saving grace. They belonged to Ebony Horsewomen, an urban riding center offering equine-assisted psychotherapy programs to the youth of Hartford. Since 1984, the programs have helped young people develop confidence and learn to express their emotions.

Phillips first began volunteering at the center to complete her high school’s community service requirement. Patricia Kelly, founder of Ebony Horsewomen, suggested Phillips begin riding as a regular participant. “She knew my situation at home wasn’t great — Mom was struggling, I was struggling, and she decided, ‘We are going to take you into our arms,’” Phillips says.

Then, an anonymous donor stepped forward to fund her riding through high school.

Phillips began to break out of her shell and excel in the Leadership Academy & Riding Team. At Kelly’s suggestion, she soon became a team captain. “Miss Kelly saw more in me than I saw in myself,” she says. 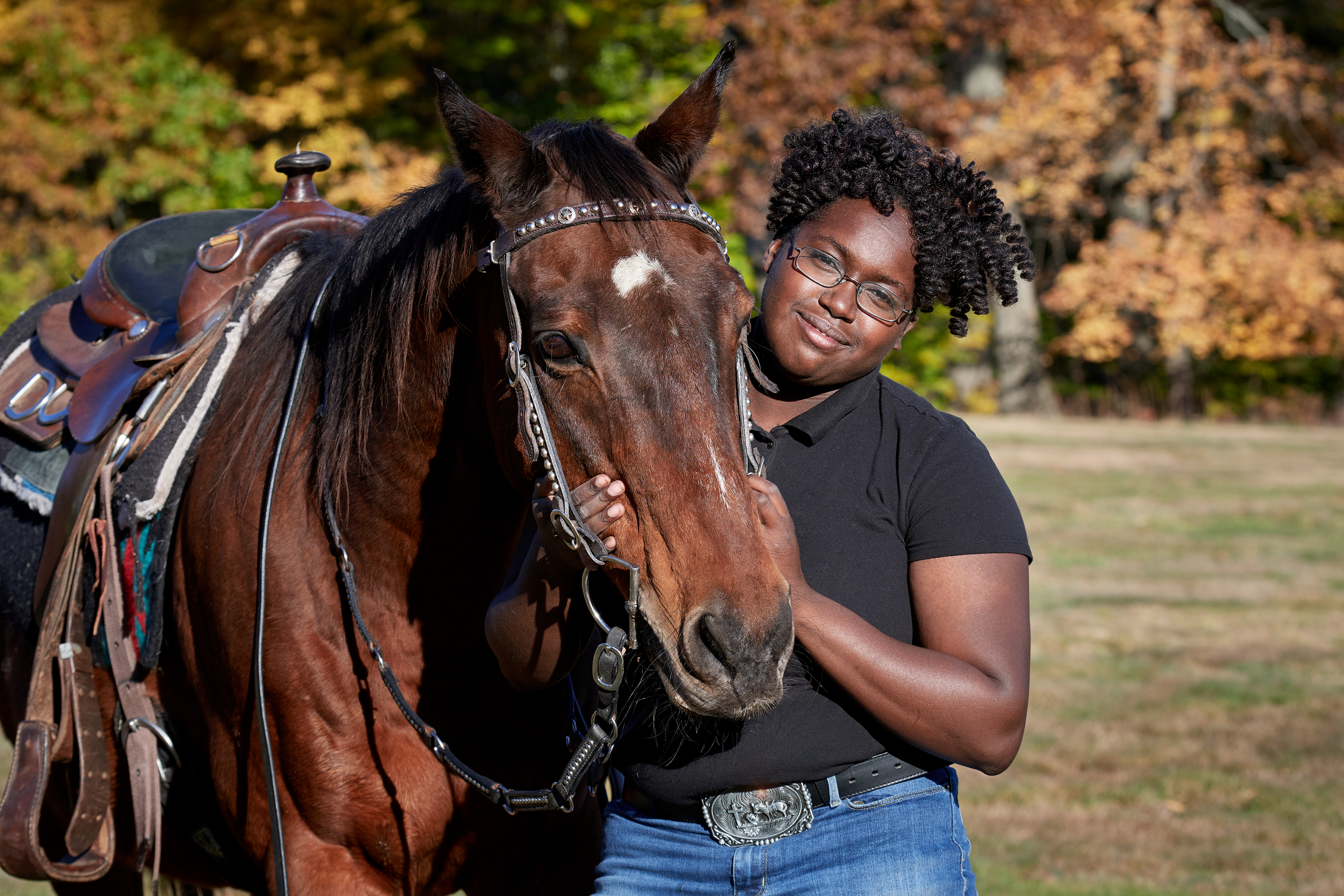 Phillips and the now 33-year-old Handsome had an almost immediate connection.

Kelly’s impact went beyond just knowledge of horses and riding. For Phillips, learning more about the history of Black equestrians gave her a sense of empowerment. “I knew there was some history of African Americans that were cowboys,” she recalls, “but I didn’t know much about it.” Phillips’ curiosity was especially piqued in her junior year of high school when her aunt found an old family photo of her maternal grandmother riding a horse. “I didn’t know that,” she admits, “and I realized that legacy of hers sort of disappeared.”

Despite the racial microaggressions that Phillips reports are common in equestrian sports, Ebony Horsewomen assured her that she, too, was fit to be a cowgirl: “They were the ones who told me, ‘Don’t be surprised that people of your color ride.’”

Today, Phillips relays the same message to future generations of equestrians. When she’s not at UConn working toward her bachelor’s degree in animal science, riding on the Western Team, or caring for the horses in the University’s stables, she leads the Leadership Academy & Riding Team and Weekend Academy at Ebony Horsewomen, therapeutic riding courses for older and younger students respectively.

“There’s a lot of chores that we have to do at the barn, of course,” she says of a typical day on the job. “We have to care for the animals, make sure the facility is clean.” But they also need to find fun activities for students when all the horses are busy in therapy sessions.

"He was considered an aggressive horse, but maybe that was the reason that we connected, because I was a little aggressive at home and I didn’t like that. And I guess he knew."

On some days, these activities can be as simple as a good-old snowball fight and making “snow-horses” in front of the barn — whatever it takes to keep the kids engaged. For Phillips, “trying to keep their spirits up is the number one thing.” Like her, many of the program participants attend Ebony Horsewomen as a way to cope with stressful home life. For them, the barn can be a safe-haven, and a place to freely express themselves.

“I love to see kids improve, even though they’re going through things that are tough,” Phillips says. “They’re workers, these kids are spot-on.”

And Phillips knows just how beneficial working with the horses can be for these students. She credits much of her own success to her 33-year-old horse, Handsome, though she admits it wasn’t love at first sight. “I was terrified, very terrified,” she remembers. “He was considered an aggressive horse, but maybe that was the reason that we connected, because I was a little aggressive at home and I didn’t like that. And I guess he knew.” 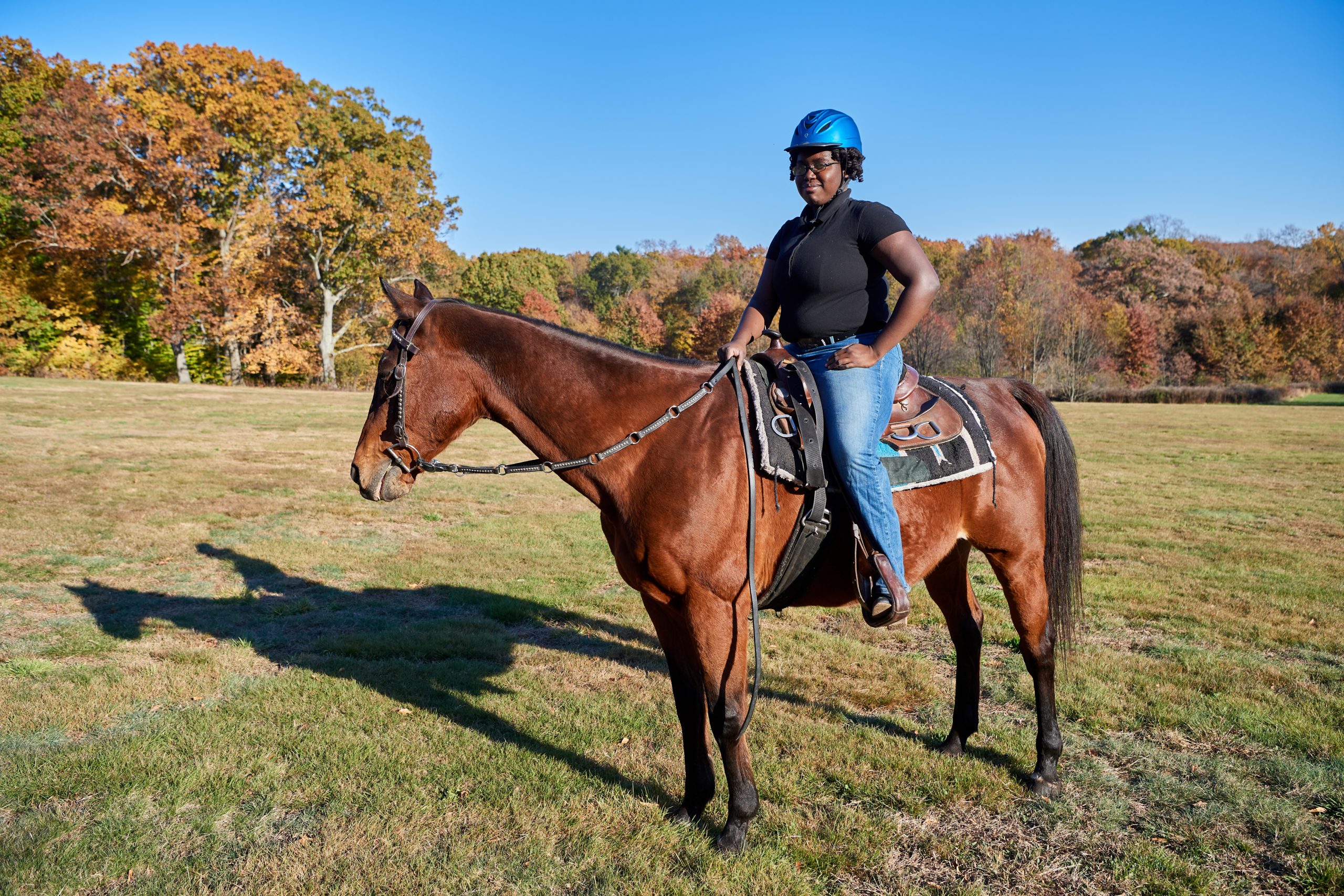 Phillips and Handsome at Keney Park in Hartford, home to the Ebony Horsewomen program.

The two ended up being a perfect match — behind Handsome’s harsh exterior hid an encouraging, empathetic personality. “He’s the one, every time I’m down, he pinpoints it right away,” notes Phillips. “He was the one that taught me how to be okay.”

Somehow, Handsome always knew how to pull Phillips out of a rough patch. “I know horses can’t talk, but they show a different way of talking,” she says. “If I was depressed I would hide in his stall away from everybody and here he is pushing me like, ‘Hey, we’re not allowed to get in that phase.’”

Having the continued ability to ride with Handsome is just one reason Phillips plans to keep working at Ebony Horsewomen while she pursues her bachelor’s. The program, she says, was a significant part of why she was able to apply to UConn and receive her associate’s degree. “I don’t think I would’ve made it to college if I didn’t get involved,” she says.

Phillips recycles all the support she received as a participant back into the program as an instructor. “Whatever knowledge I take from UConn, I send it back to the kids of Hartford,” she says. And with her own journey as an example, she always encourages her students to follow their dreams. She offers the same sage advice to all: “If you financially can’t do it, pray and there’s a way. You never know who’s there to help. Just look forward and keep going. Don’t let anything stop you.”