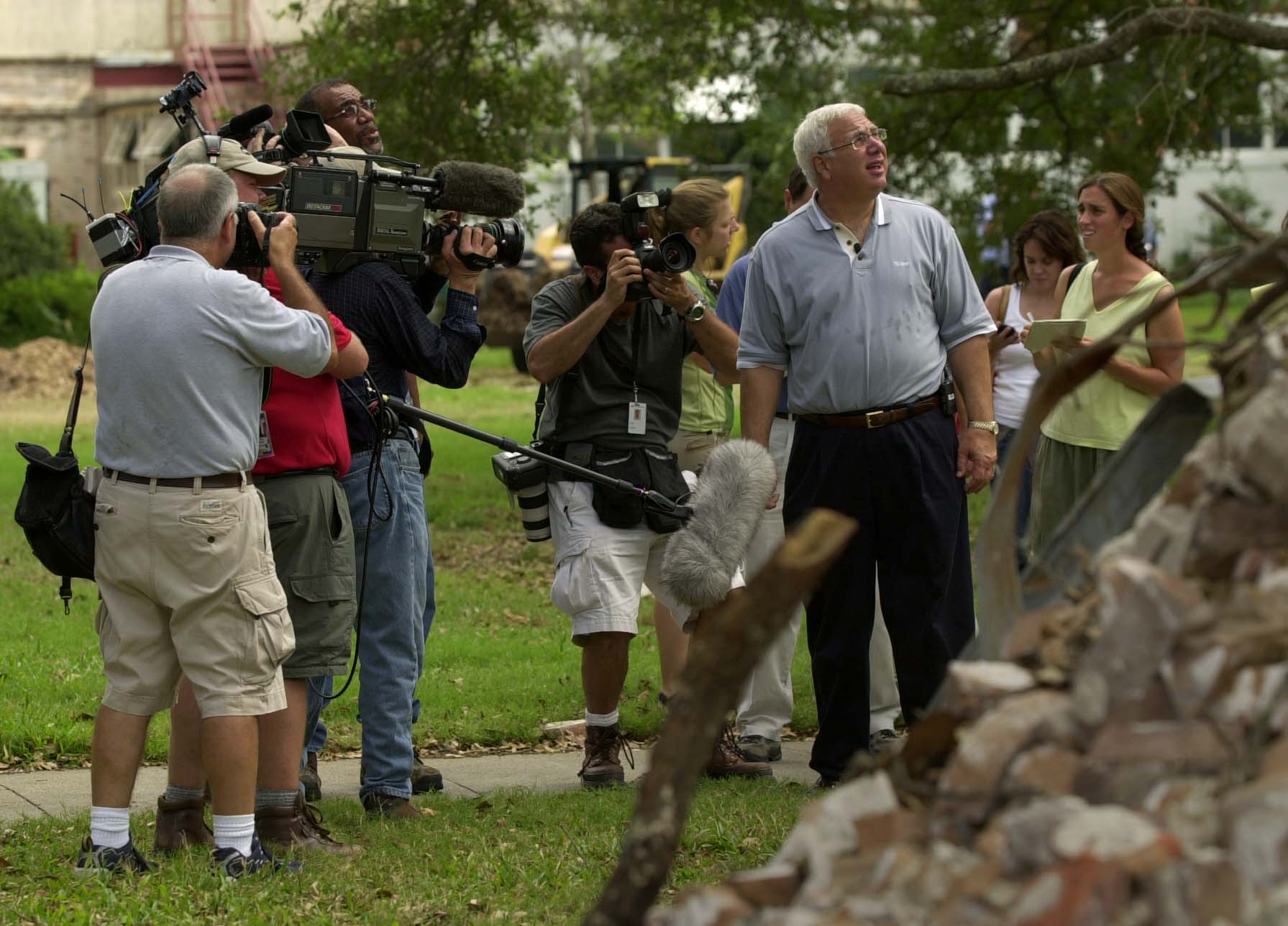 The more extraordinary the challenge, the more likely UConn Distinguished Alumnus Scott Cowen will be asked to help. Cowen moved Tulane University past Hurricane Katrina and was tempted out of retirement recently to guide Case Western Reserve University through the worldwide pandemic.

cott Cowen ’68 (BUS) knows what it means to lead during a major crisis. His savvy and sensitive style as the Tulane University president who helped the city of New Orleans recover after the devastation of Hurricane Katrina spurred folks at Case Western Reserve University in Cleveland to lure him out of retirement to see them through the beginning of the Covid pandemic.

It begins, he says, with lists.

Scott Cowen ’68 (BUS) knows what it means to lead during a major crisis. His savvy and sensitive style as the Tulane University president who helped the city of New Orleans recover after the devastation of Hurricane Katrina spurred folks at Case Western Reserve University in Cleveland to lure him out of retirement to see them through the beginning of the Covid pandemic.

It begins, he says, with lists.

In the earliest days after Hurricane Katrina, when he and his team were evacuated to Houston, Cowen remembers not being able to sleep and calling his wife, who was in New York. “I told her I had no idea what to do. I’d never encountered anything like this,” he recalls. “I didn’t even know if the university was going to survive. I remember her saying to me very, very calmly, ‘What have you always done when you feel overwhelmed?’ I said, ‘I usually make a list and I prioritize things.’ So she said to me very calmly, ‘You better start making a list.’”

From that first list, he and his team devised a plan that would help Tulane return after having 70% of its main campus flooded and all of its health science campus underwater, a plan that would send students, faculty, and staff to universities around the country and find 87% of the students returning when the Tulane campus opened months later. It was a plan that meant making hard choices and reimagining the university through big ideas like a public service graduation requirement that meant all Tulane students would be involved in the rebuilding and strengthening of New Orleans. The university fundraising campaign he led that year surpassed its $700 million goal.

Leading through a crisis, says Cowen, means continually communicating with and listening closely to every stakeholder. That is exactly what he did in the days and months after Katrina, says Dr. Karen DeSalvo, who was then on Tulane’s medical school faculty and is now chief health officer at Google Health. “When the streets were still flooded and the city was under martial law, he came to where we, the team of Tulane medical residents and faculty members, were delivering care. He spent hours with us visiting each site and taking the time to listen to the people he met, so that he could understand the impact of Katrina on their lives and families and understand how Tulane could be there to help. He stood by our side, stood up for us,” she said in a tribute to Cowen on the occasion of his transition from Tulane president to professor. He saw to it, she said, that hundreds of thousands of people received care who “otherwise would have gone without.”

Cowen’s work on behalf of the university and the city of New Orleans and its public schools brought him countless accolades and awards. Time magazine named him one of the country’s 10 Best College Presidents, and he received the 2009 Carnegie Corporation Academic Leadership Award. In 2010, Cowen was elected to the American Academy of Arts and Sciences, and in 2013 he was named a UConn Distinguished Alumnus.

The year 2020 found Cowen leading another university through an unprecedented crisis. He was still teaching at Tulane when he was asked to step in as interim president of Case Western Reserve after Barbara R. Snyder left to become president of the Association of American Universities. “It helped that I knew Case Western and I knew Cleveland well,” says Cowen, who had worked at Case Western for 23 years — as a professor and as dean of the Weatherhead School of Management. “Snyder had a great team in place, and they had created 24 subcommittees to deal with the pandemic,” he says. 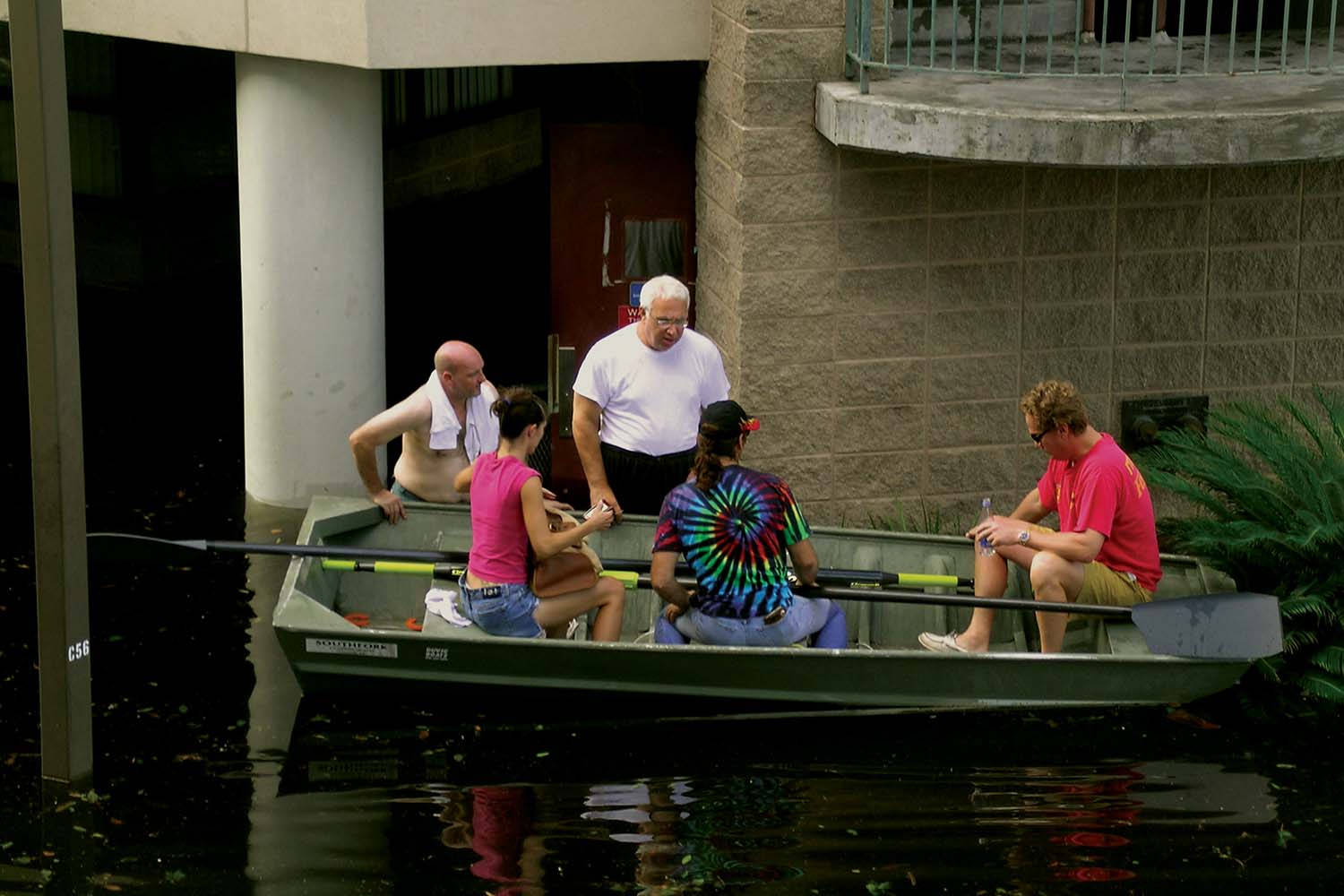 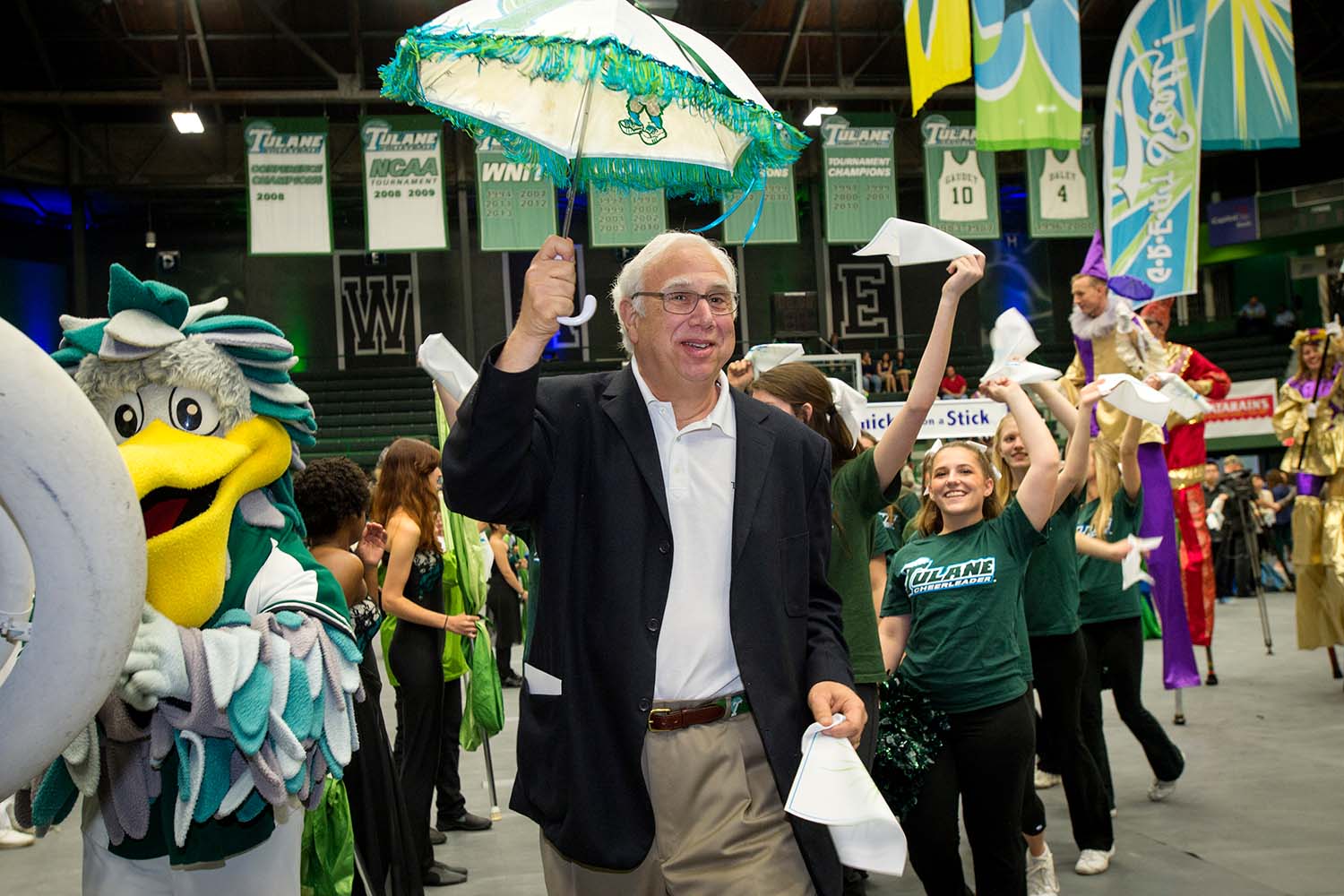 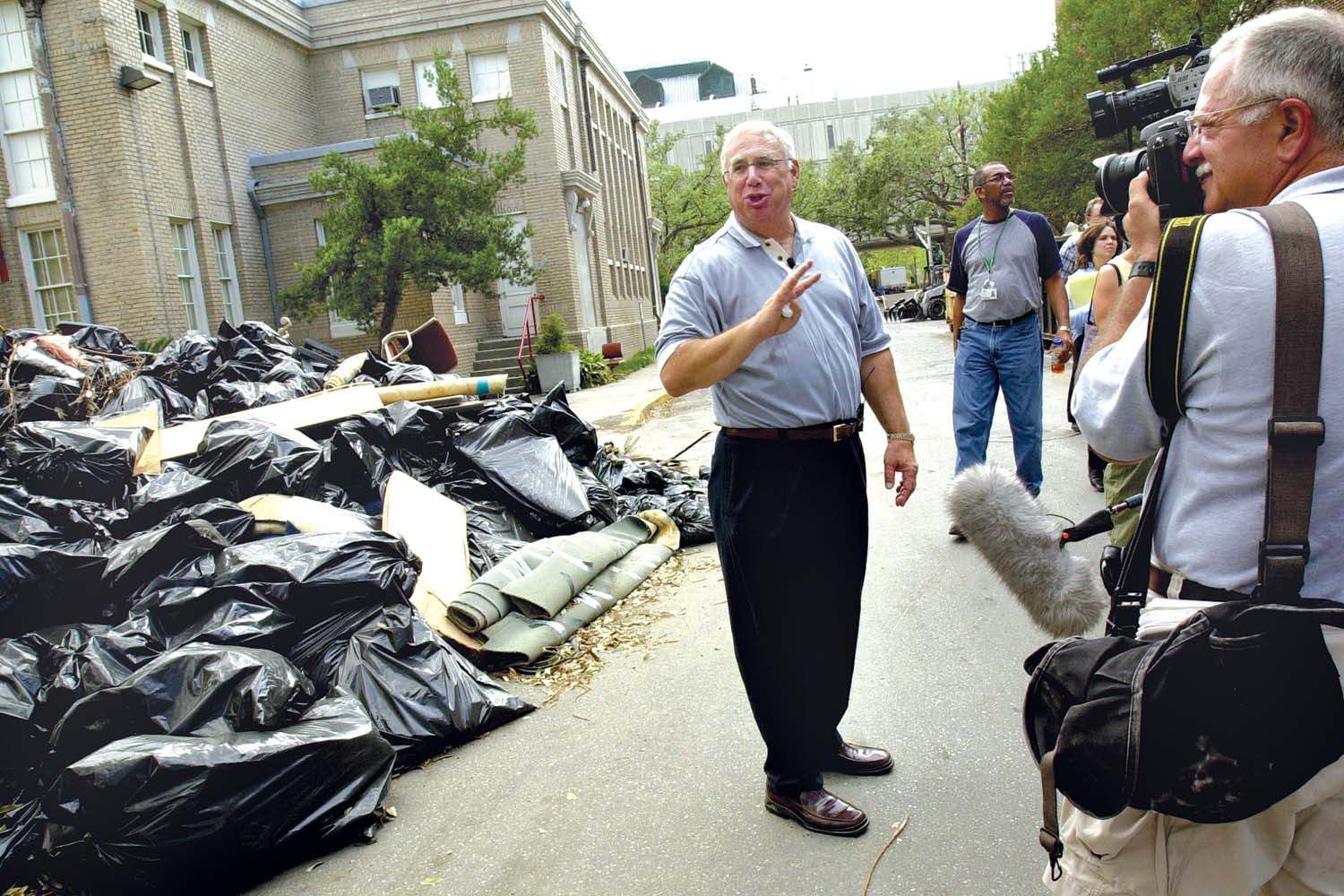 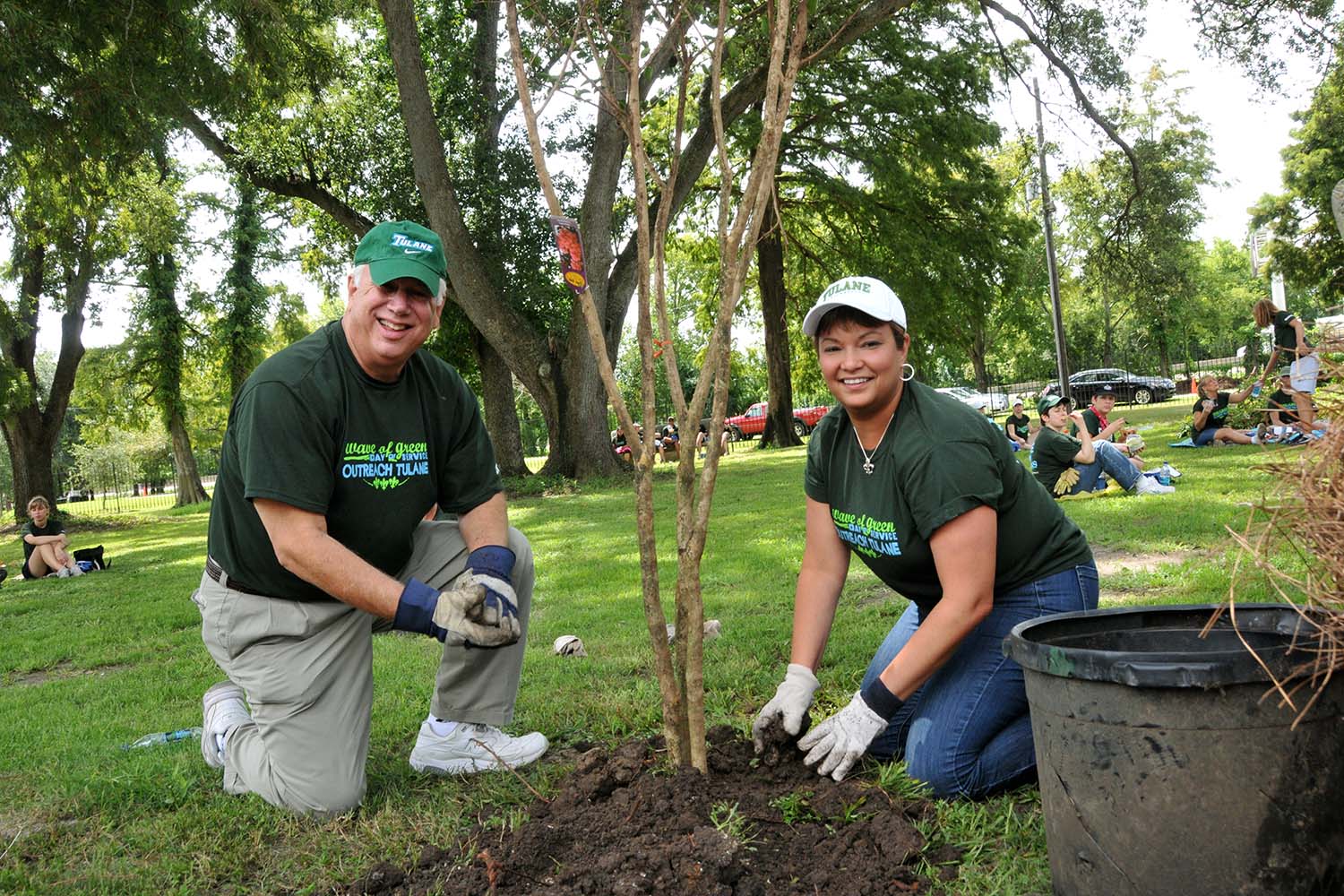 Cowen’s hands-on, student-centric leadership style saw Tulane through the atermath of Hurricane Katrina, and won him a bevy of national awards and accolades.

Still, “For the first month or so as I was shadowing Barbara, I really wondered if I could grasp the complexity of what was going on and be able to lead the team forward,” he says. “Interestingly enough my old instincts of being a University president for many years and being in a crisis situation suddenly came back — how to process and think about these things.”

His number one goal was to ensure the safety, well being, and health of the faculty, staff, and students, he says, adding that communication and transparency would be key. Information on Covid-19 testing, the number of students in isolation and quarantine, and other key metrics were posted each week on the university’s dashboard.

Listening really mattered. “I met by Zoom with every single student group, with all faculty of every school, and the staff as well,” he says.

From the moment he arrived on campus, even before becoming interim president, Cowen was listening — to faculty, to students, to staff. Joachim Voss, the Independence Foundation Professor of Nursing Education at the Frances Payne Bolton School of Nursing and chair of the Faculty Senate, says student leaders continually sent out surveys to take the pulse of the student body to make certain that the administration, faculty members, student support services, and staff knew how students were doing “emotionally, psychologically, what they needed in terms of technology, in terms of access. We wanted to know the students, to help them, to make things better for them.”

That tone was set, from the start, by Cowen, Voss says. Cowen kept seeking out creative ways to maintain a college feel when the pandemic conspired against it. He brought in ice cream trucks and sent care packages to students who had been displaced to reduce housing density.

“How are you doing is the question he asks every time he meets with a student group.”

When students from China were stranded because restrictions wouldn’t allow them to return to campus, Cowen quickly found a sister University in Sian, China, where 240 students could study remotely and live. “He’s very student-centric and will make things happen quickly,” Voss says. “He sees an opportunity — he jumps on it.”

Hunter Stecko, an electrical and computer engineering major who was president of the undergraduate student government, remembers the first meeting he had with Cowen and the student general assembly. Cowen gave opening remarks, introduced himself, and then “flipped the script. He said to the 50 representatives, ‘You’ll have plenty of time to ask me questions, but how are you doing?’”

A nursing student spoke about how stressed she was trying to learn during a pandemic and how she needed more support and even more stringent safety protocols. “That seemed like it really struck him, and I can say that things improved dramatically right after,” Stecko says. “How are you doing is the question he asks every time he meets with a student group — and I’ve been to multiple Zoom meetings with him. Just by observing him it seems like he would be more than pleased if the entire meeting was that kind of discussion.”

That concern reassured the campus community as it faced something so unnerving, Voss says. Right before Thanksgiving, after the University had made it through the semester and students were heading home, Cowen sent out a personal email to the campus. Voss said many students told him how touched they were by it.

“He wrote about what he was thankful for, and the students felt he cared about them,” Voss says. “The message was written so that everybody felt personally seen, heard, respected. He acknowledged what a challenging time this was and how thankful he was to everybody, especially students, for really distancing and mask wearing. We have a community pledge the students, faculty, and staff developed together and he was very proud of the pledge — that we kept our community, the campus, the staff, students, and faculty healthy by promoting the rules on campus.”

Cowen says the Case Western students have been remarkably resilient. He tells them the lessons they’re learning and skills they are using in this uncertain time will serve them well throughout their lives.

He’s found that to be true again and again in his own life. “I have dyslexia and it wasn’t diagnosed until I was 22, so I had a really hard time growing up,” he says. “I didn’t do well in school, people interpreting that you’re not a smart guy, that you’re lazy. In high school I began to come into my own and over time more and more so, but just overcoming the fact that I had a disability helped develop a sense of resilience.”

That was further strengthened when he was at UConn playing football for his position coach Lou Holtz. “I learned about discipline and toughness from him,” he says. His time serving in the U.S. Army in the Middle East in the 1960s and those early days after Hurricane Katrina reminded him that no matter what challenge life puts in front of you, “You have to find ways to move forward.”

Cowen, who is now back to teaching at Tulane, says his biweekly messages to the Case Western community focused on that. “Each one talks about my own experiences and why, during a time like this, we always have to have a sense of hope mixed with reality. What’s the hope part? How can we work toward it? We have an obligation — those of us who have been through a crisis — to make something good come of it.”