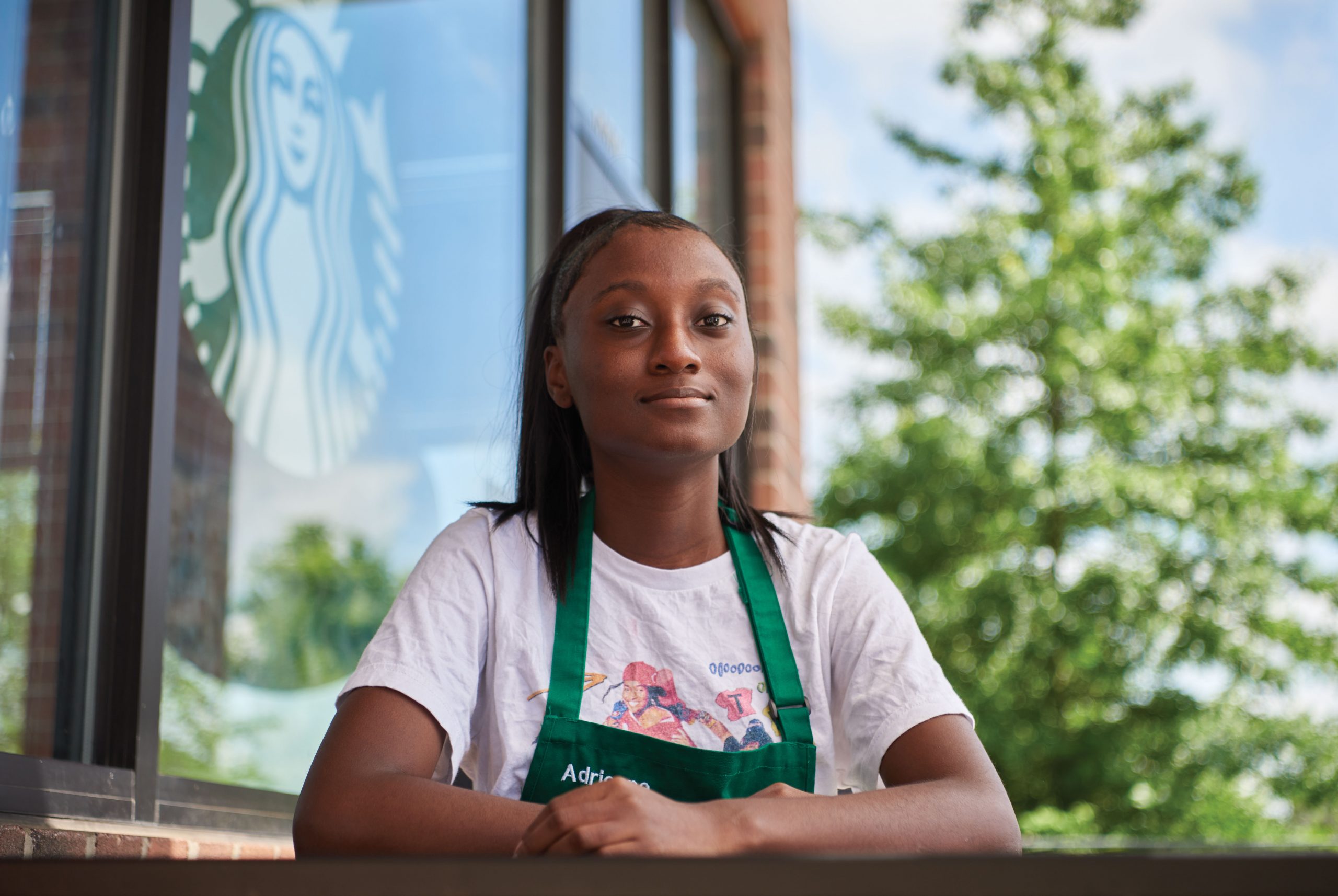 Bruce at her Starbucks job in Wethersfield, Connecticut, in June.

Trapped at home during quarantine in the spring of 2020, Adrienne Bruce ’22 (CLAS) decided the time was ripe to pick up another language. As soon as her remote classes ended, the linguistics and philosophy major turned to online Korean lessons. “It was something fun to do while I adjusted to quarantine,” she says.

Bruce is putting her pastime to the test this semester at Sogang University in Seoul, South Korea, on a Gilman Scholarship for undergraduate studies abroad from the U.S. State Department. She spoke with us in July.

Are you at all nervous about going to South Korea? Yes, because studying abroad is something I’ve wanted to do for a long time. Winning the scholarship makes me feel me more nervous because that requires I do a project during the semester. I am thinking about finding other Black people who live in South Korea and interviewing them about their experiences there as a way to help encourage Black students to study there. I know some Black people who are scared to go to South Korea.

Why do you think that is? I think Black students might be reluctant because it may be their first time in an ethnically homogeneous country. I, among other Black people, may be afraid to feel isolated and not find others (in this situation, Black students) that have gone through the same situation of studying abroad.

When did you get interested in foreign languages? It started as a kid. I’m from East Hartford and in sixth grade I went to a school that focused on music and languages. Each semester we studied a different language. We had Spanish and Mandarin in sixth grade. In middle school, I spoke French for two years, and in high school I studied Mandarin again and did Japanese on my own. Then at UConn I studied Mandarin and Japanese.

How did you pick UConn? I went to the Fall Preview on a cloudy day with a forecast for rain, but everyone on the tour had a good time despite the weather. After that I really wanted to attend UConn to experience such a big campus with so many majors and clubs.

Why did you choose linguistics and philosophy as your major? I wanted to learn about more languages, instead of focusing on only one. I wanted to learn about the core languages and how those expand into other languages. I have an interest in sociolinguistics, which is how language and society are connected. Why do people from different regions speak the way they do, and how does the way people speak affect socioeconomic class? I also have a minor in literary translation. I have fun translating because it’s like peering into the mind of the author.

How have you balanced your schoolwork with your jobs in the undergraduate admissions office and at Starbucks? In the admissions office, I got to package up acceptance letters, which gave me insight into how many talented students apply. I worked six to eight hours and did that from home. I worked 15 to 20 hours at Starbucks. My manager was understanding. She wanted me to put my schoolwork first, but there were times it was a little stressful.

What’s your favorite drink? I don’t like coffee. My go-to is iced matcha latte with caramel and vanilla. I use one less scoop of matcha so it’s milky.

What extracurricular activities have you had time for? I go to language club meetings. I’ve met a lot of my friends that way. I’m most active in the Korean Student Association. I also volunteered as a Husky Ambassador and let students interested in attending UConn shadow me.

What’s left on your to-do list to get ready for South Korea? I’m waiting to hear about my visa and I’m packing. South Korea has a similar climate to Connecticut so I’m trying to pack as if I’m going to UConn for the semester — but with more because I’ll be in a different country as opposed to being 30 minutes from home. My brother won’t be able to drop off anything for me.