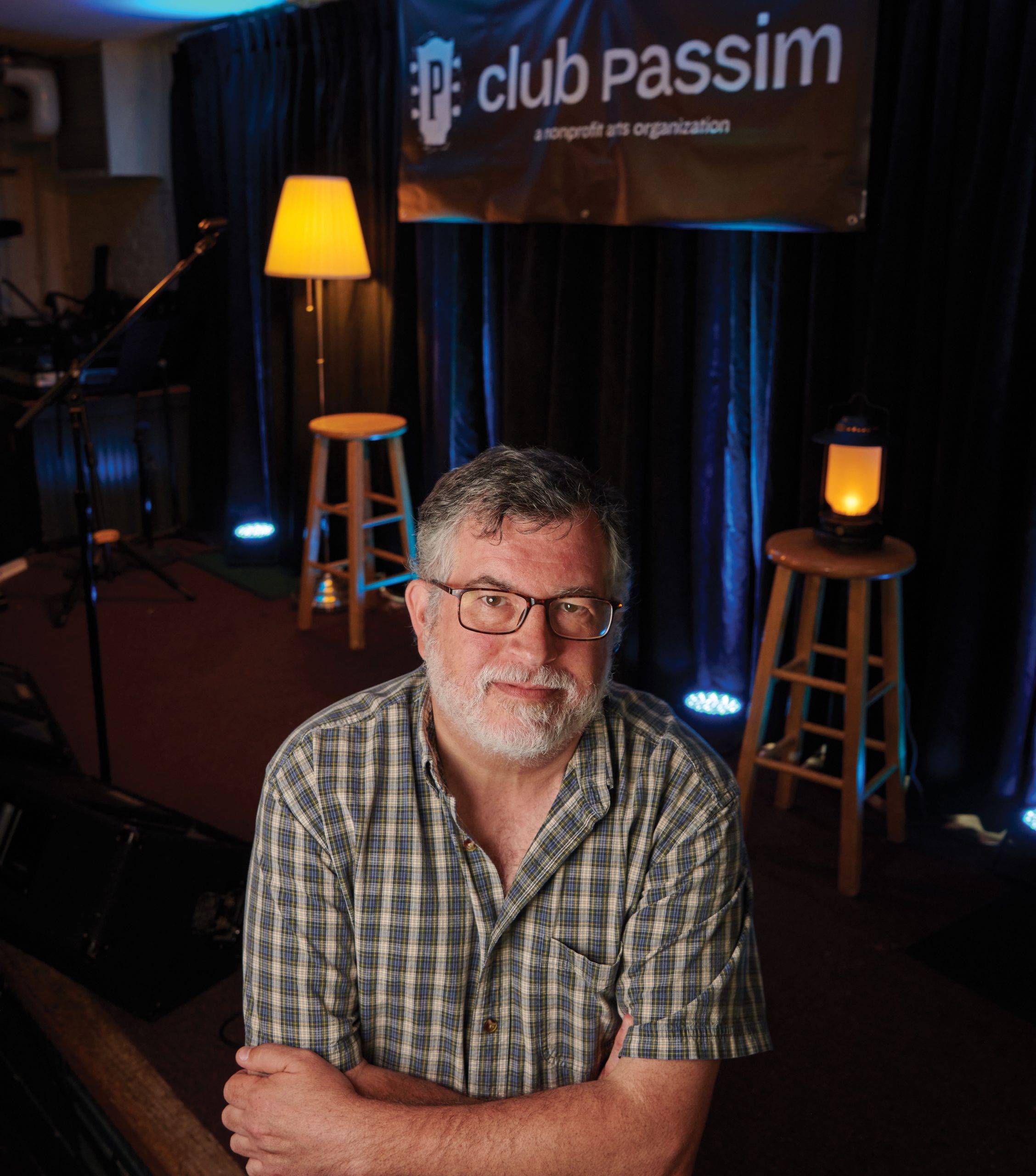 Matt Smith ’92 (CLAS) was in trouble. He had a full house, it was approaching 9 p.m., and he still hadn’t heard from his headliner.
“This was before everyone had cell phones,” recalls Smith, “and it was a Friday night, so I couldn’t reach the guy’s manager.”

Smith told the opening act, a local guitar slinger named Mark Erelli, to stretch for as long as he could. But after an hour, Smith finally had to tell the packed room the feature performer was a no-show, and anybody who wanted would get a full refund. Only three did. The rest stayed for Erelli’s improvised second set, bought out all the merchandise he had (“He had to run to his car for more,” Smith says), and gave the lesser-known singer-songwriter a standing ovation and three encores — the last one performed unamplified, standing on a chair by the kitchen. Erelli has sold out shows at Cambridge’s Club Passim ever since.

“To me, the most exciting thing about the job is finding really good stuff and grabbing people by the arm and saying, ‘Listen to this — this is amazing.’ It’s not just a financially driven decision. It’s part of our mission to find and develop new talent.”

Contemporary folk music is foreground music. It is literate, rewards close attention, tells stories that make you laugh or cry — sometimes in the same song — and Smith says he was hooked on it when he was first heard it in the late ’80s at UConn.

“A friend of mine in the dorm made me a mix tape of some of the top people on the scene, Bill Morrissey and John Gorka and Cliff Eberhardt and Patty Larkin,” says Smith. “I started driving all over New England to see several shows a week. A lot of them were right here at Passim.”

The club in Harvard Square began in 1958, at a different location, as Club 47, moving to a basement room on Palmer Street in the ’60s run by the legendary Bob Donlin, who booked such acts as Bob Dylan, Joan Baez, Joni Mitchell, Tom Rush, and Muddy Waters. After Donlin died, the club reorganized in 1994 as a nonprofit and solicited volunteers. Matt Smith volunteered; now he’s been running it longer than Donlin did, with no plans to go anywhere else.

The Dreaded Pivot
Not surprisingly, Smith’s most recent challenge has been adjusting to the pandemic, when all the clubs suddenly shut down and the musicians he depends on lost their livelihoods. With the ability to livestream on Facebook, StreamYard, and other platforms, Club Passim quickly adapted and turned itself into a kind of miniature television studio.

“We’ve been able to keep some of the programs we started when we became a nonprofit going by streaming. Our music school, with classes and workshops, has actually expanded because of online programming. In June of 2020, we started doing a virtual open mic, essentially a Zoom meeting where musicians join and take turns playing songs. We’ve had people from as far away as Australia perform at it. We’ve done livestreams from here, with a few masked socially distanced staff members for a live audience. We also give grants to artists, so during the pandemic, we started something called the Passim Emergency Artist Relief Fund, as a way to get money into the hands of musicians who were out of work. In a year’s time, we raised and distributed over $160,000.”

His open, generous approach explains why, in an industry where club owners are frequently vilified for taking advantage of musicians in a variety of ways, Smith is universally respected, even beloved.

“I’ve never understood the idea of venues and artists being on opposing sides,” Smith says. “We’re both trying to make money on the same thing. We’re supposed to work together, because the full house is everyone’s goal. The good show is everyone’s goal. It’s my job to create the best environment where that can happen.”

When it all comes together, in a small intimate room, where the audience is sitting right on top of the performers, witnessing something remarkable, there’s nothing like it. People familiar with the phenomenal musical “Hadestown,” which won eight Tony awards in 2019 before Covid shut Broadway down, might not know it was the work of a folksinger, Anaïs Mitchell.

Mitchell got her start at Club Passim and, in fact, gave the show, which was originally a kind of concept album, one of its earliest staged readings there.

“I’ve known Anaïs since she was 18. She grew up in Vermont, but then moved down here for a little bit. She took songwriting classes here and came to play the open mic. She was telling me about the record, so we were thinking how cool it would be to do a local version. We mapped out all these performers. She had the full band with her, and we pushed the risers together in front of the stage to form a thrust, so the band was up on stage, and the five singers were around a table on the risers, with a condenser mic in the middle, and Anaïs on guitar, but the others were just singing. And we ended up selling out three nights with it. It was fantastic. I remember Anaïs was worried, asking, ‘What am I going to do if they want an encore? I don’t have anything else.’

“I said, ‘You bow. That’s what people do in theater. They bow their heads, and that’s it. You’ve done the show.’”