A Picture is Worth a Thousand Lectures

The man behind those gorgeous campus photos on Instagram is a longtime UConn professor and wildlife biologist.

ilton Levin ’04 Ph.D says he’s often surprised at how Husky Nation responds to the photos he takes. A recent drone shot of Mirror Lake garnered more than 8,000 likes within hours of being shared on Instagram and became one of UConn’s top posts of the year. “I wish I knew the magic formula so I could be more selective, but I just try to take unique shots,” he says. Levin walks his photogenic chocolate lab, Acadia, around campus at different times of day and snaps photos when the circumstances seem right. “I always have a camera with me. I’m always thinking about how to document what I see.”

Milton Levin ’04 Ph.D says he’s often surprised at how Husky Nation responds to the photos he takes. A recent drone shot of Mirror Lake garnered more than 8,000 likes within hours of being shared on Instagram and became one of UConn’s top posts of the year. “I wish I knew the magic formula so I could be more selective, but I just try to take unique shots,” he says. Levin walks his photogenic chocolate lab, Acadia, around campus at different times of day and snaps photos when the circumstances seem right. “I always have a camera with me. I’m always thinking about how to document what I see.” 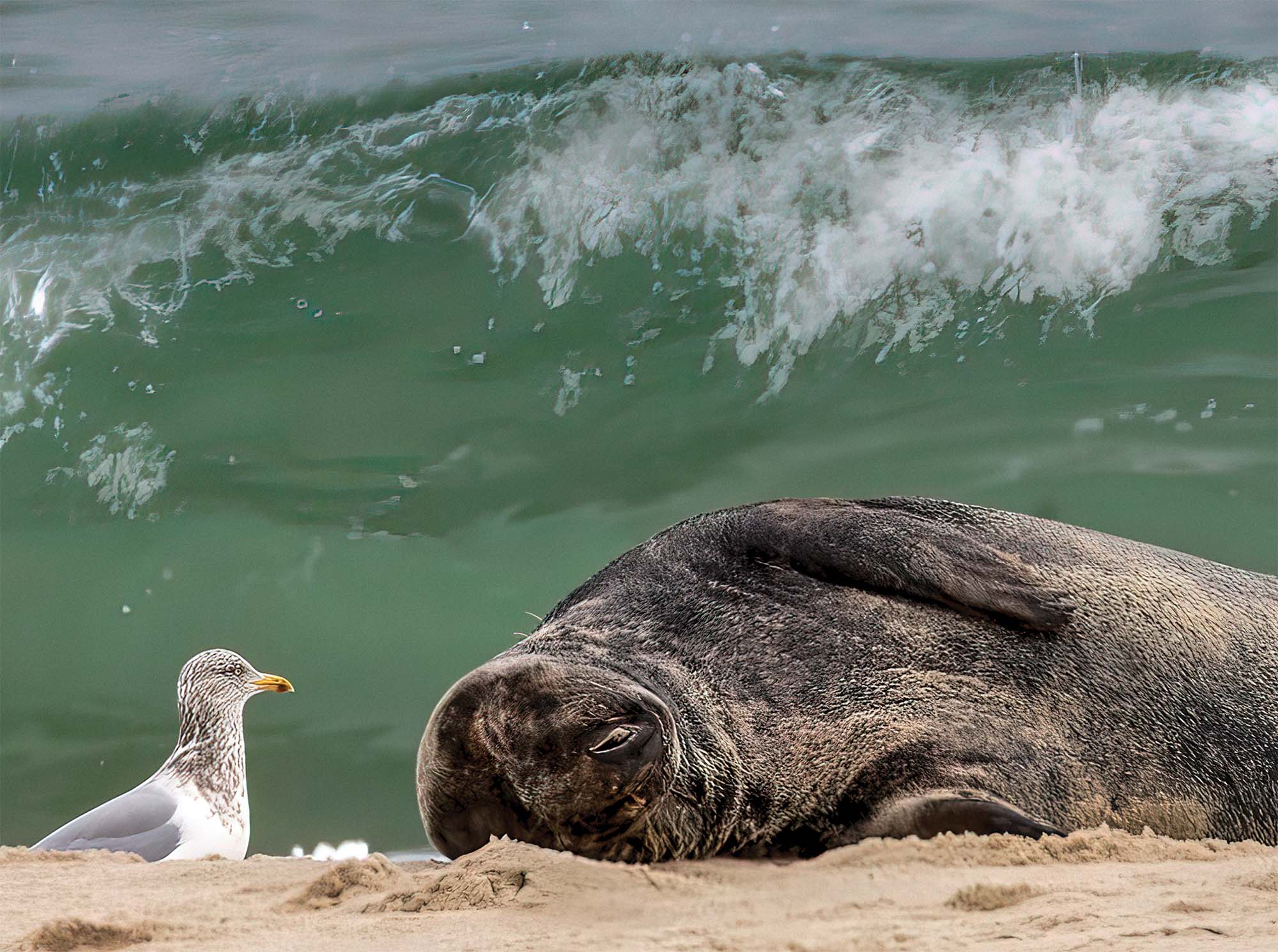 Levin’s research on marine species has taken him to the remotest spots on the planet, but also to places like Monomoy National Wildlife Refuge on Cape Cod, where this grey seal was having a siesta.

Levin first came to Storrs in 1999 as a graduate student. Working as a necropsy technician and making bagels at his twin brother’s shop in Virginia are just two of the detours his academic career took before he realized that research was his passion. That brought him to UConn to work with Sylvain De Guise, professor of pathobiology and veterinary sciences and director of Connecticut Sea Grant, studying the impact of environmental contaminants, particularly polychlorinated biphenyls (PCBs), on the immune systems of marine species, such as seals, dolphins, and polar bears. The research took him far off the beaten path, to places few humans get to see. 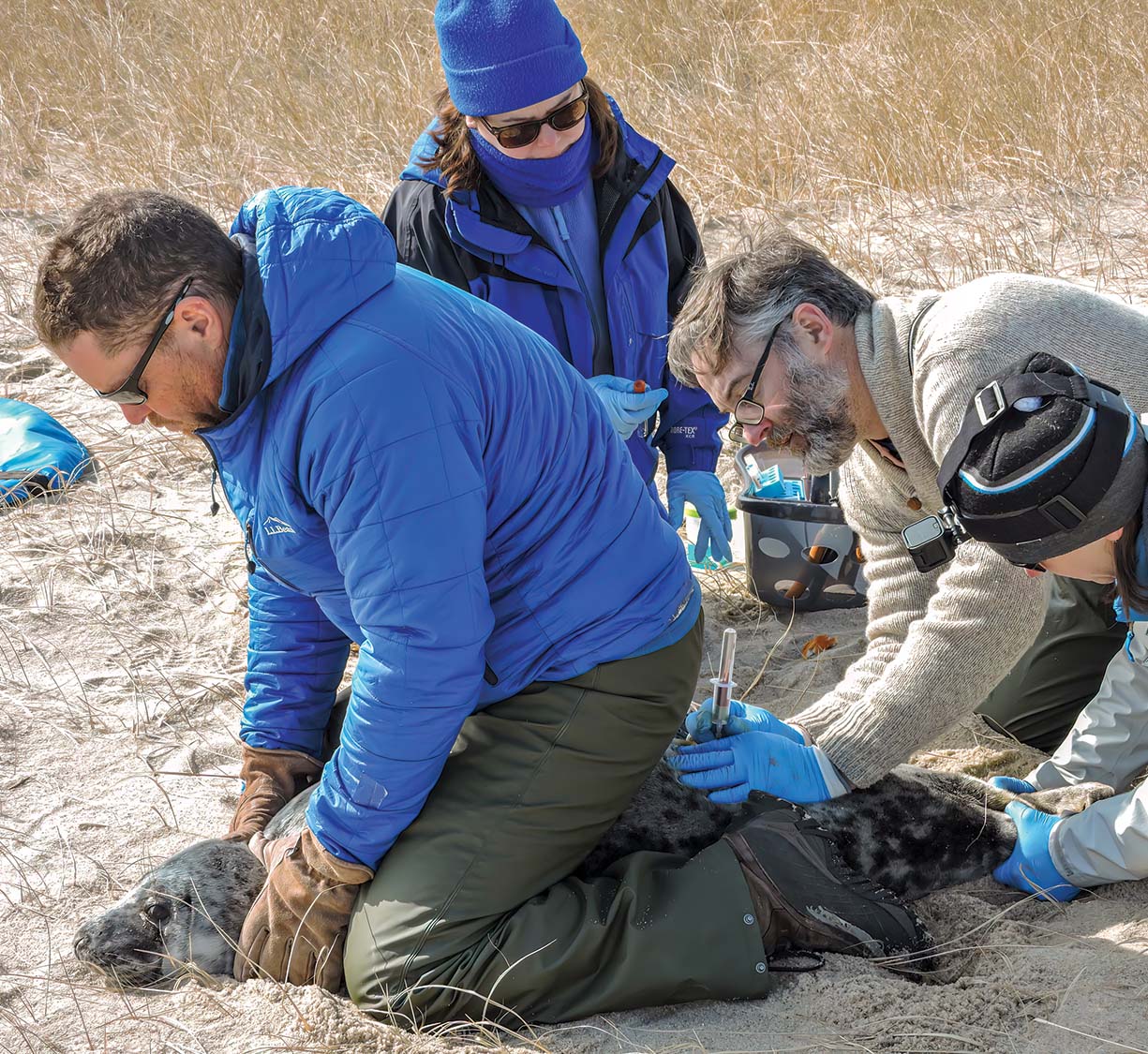 Levin carefully restrains a grey seal pup during blood collection as part of a health assessment study at Great Point on Nantucket, Massachusetts.

In Vancouver, British Columbia, Canada, Levin studied the association between the presence of the PCBs and the immune response of harbor seal pups. He and De Guise were part of a research team that showed the long-lasting environmental impacts of the 2010 Deepwater Horizon catastrophe, considered to be the largest marine oil spill in history, on Barataria Bay dolphins. And the two traveled to Arviat, Canada, a remote Inuit area, to study PCBs in beluga whales.

“My interest in photography started because I got to go to these amazing places,” says Levin.
Initially, he just wanted to capture these memories for personal reasons. But he soon discovered his pictures could be more than fodder for a personal photo album. Lectures or invited talks featuring videos of the charismatic megafauna from his field research trips stir something that data and graphs never will, he explains. “I always have at least one student come up to talk or email me about opportunities to work in the lab, especially undergrads. That makes your day. You’ve at least reached one person. Once I started seeing that reaction, I knew I needed to start documenting a lot more.” 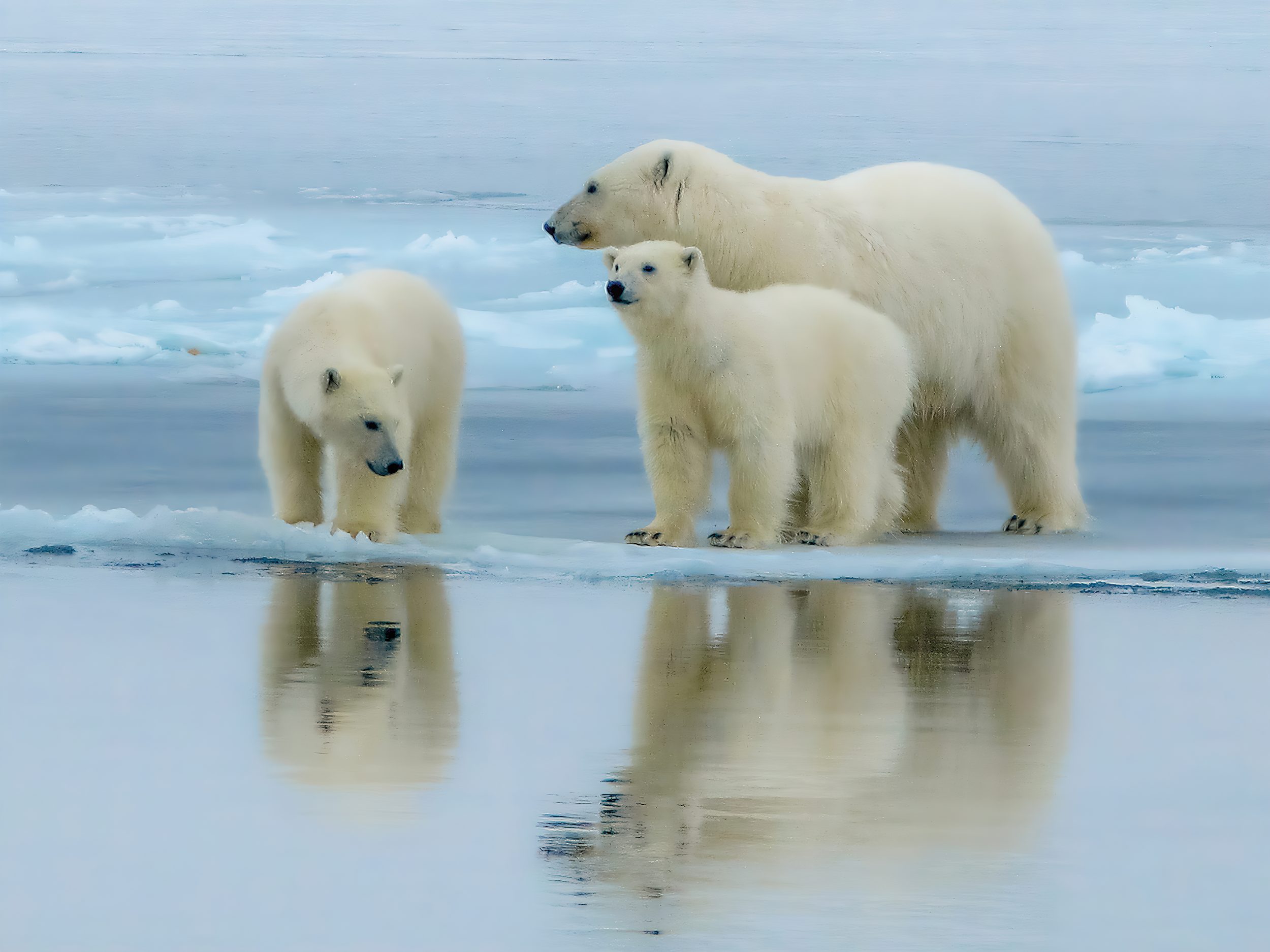 A polar bear and her two cubs walking along a partially frozen fjord in Scoresby Sund, East Greenland.

Preparing for his voyages started to include packing different cameras and lenses, and setting aside time for photography. He even began mulling over photo plans in the same way he mentally maps out his experiments and sample collection, before falling asleep. But, he insists, “The science always comes first; I won’t sacrifice anything there. If it’s my job to hold a net one day, I’ll hold the net and put my camera down. Or maybe I’ll strap on a GoPro so I can do both.” 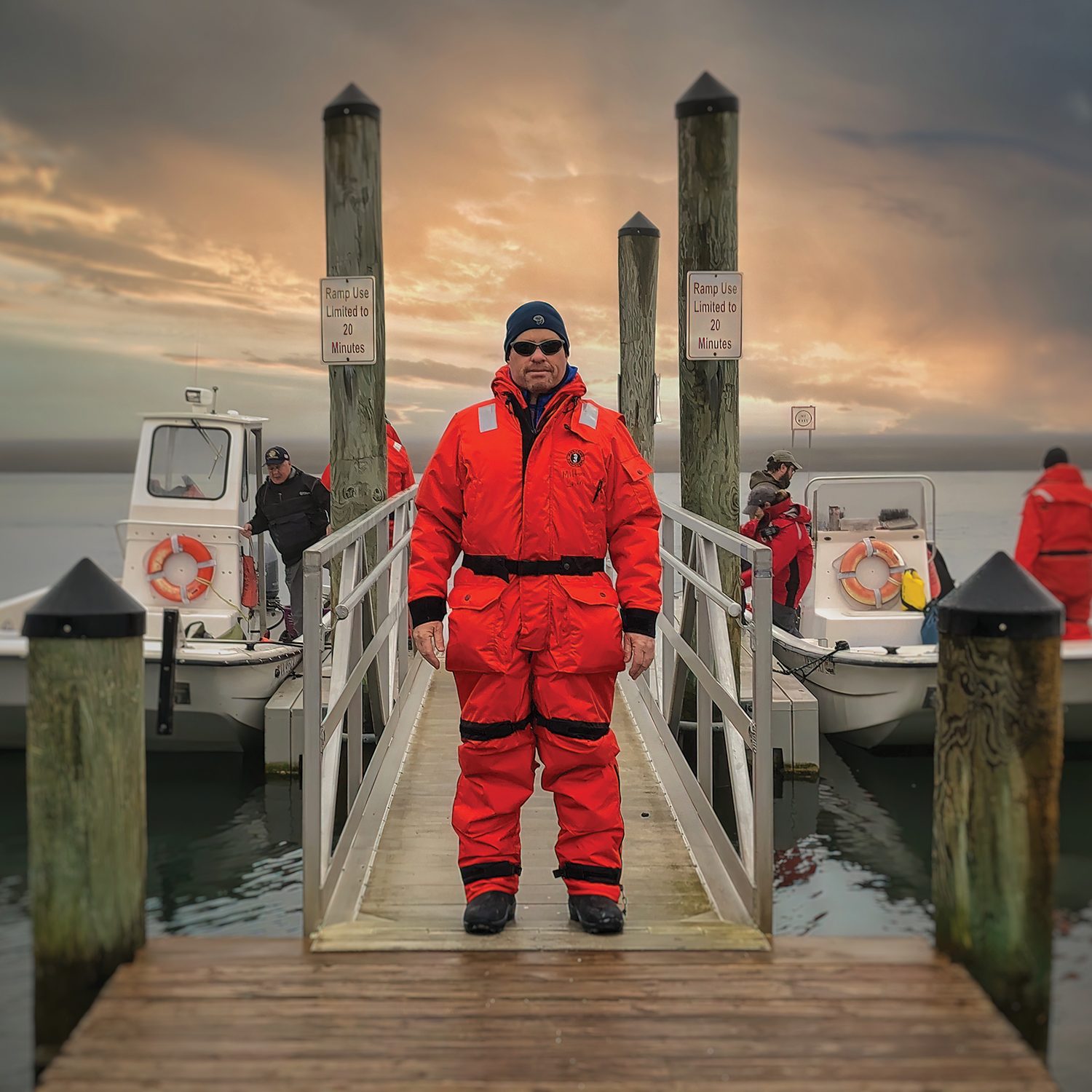 Levin in his Mustang Survival suit, before heading out on Chesapeake Bay in Virginia to collect samples from harbor seals.

On a trip to Scoresby Sund, East Greenland, in 2012, Levin was working with Danish colleagues from the Greenland Institute of Natural Resources. The team trekked with their “mini labs” on their backs to a remote research site, where they worked with indigenous subsistence hunters to collect samples from polar bears. Levin was standing near the water’s edge when a colleague tapped him on the shoulder. He turned around to see three polar bears — a mother and her two cubs — approaching. Levin quickly got his camera out to capture their image. It’s one of his most treasured photos.

“When I see [the photo], it still has an impact on me. I can still smell it and hear the dogs barking in the background as these bears came closer. It may not be the best photo I’ve ever taken, but it reminds me of one of my best days as a wildlife biologist.”

Photos like this one are captivating, yes, but they also bring the effects of climate change and species decline into focus. Although parts of the world like Scoresby Sund remain largely untouched by humans, they aren’t safe from the effects of human activities — quite the opposite, says Levin, citing a recent study he worked on. “People think these are pristine environments, but the science shows that polar bears and killer whales have some of the highest levels of wildlife contamination. Even though PCBs haven’t been produced in 40 years, they find their way into the ecosystem and affect the immune systems of Arctic animals.” 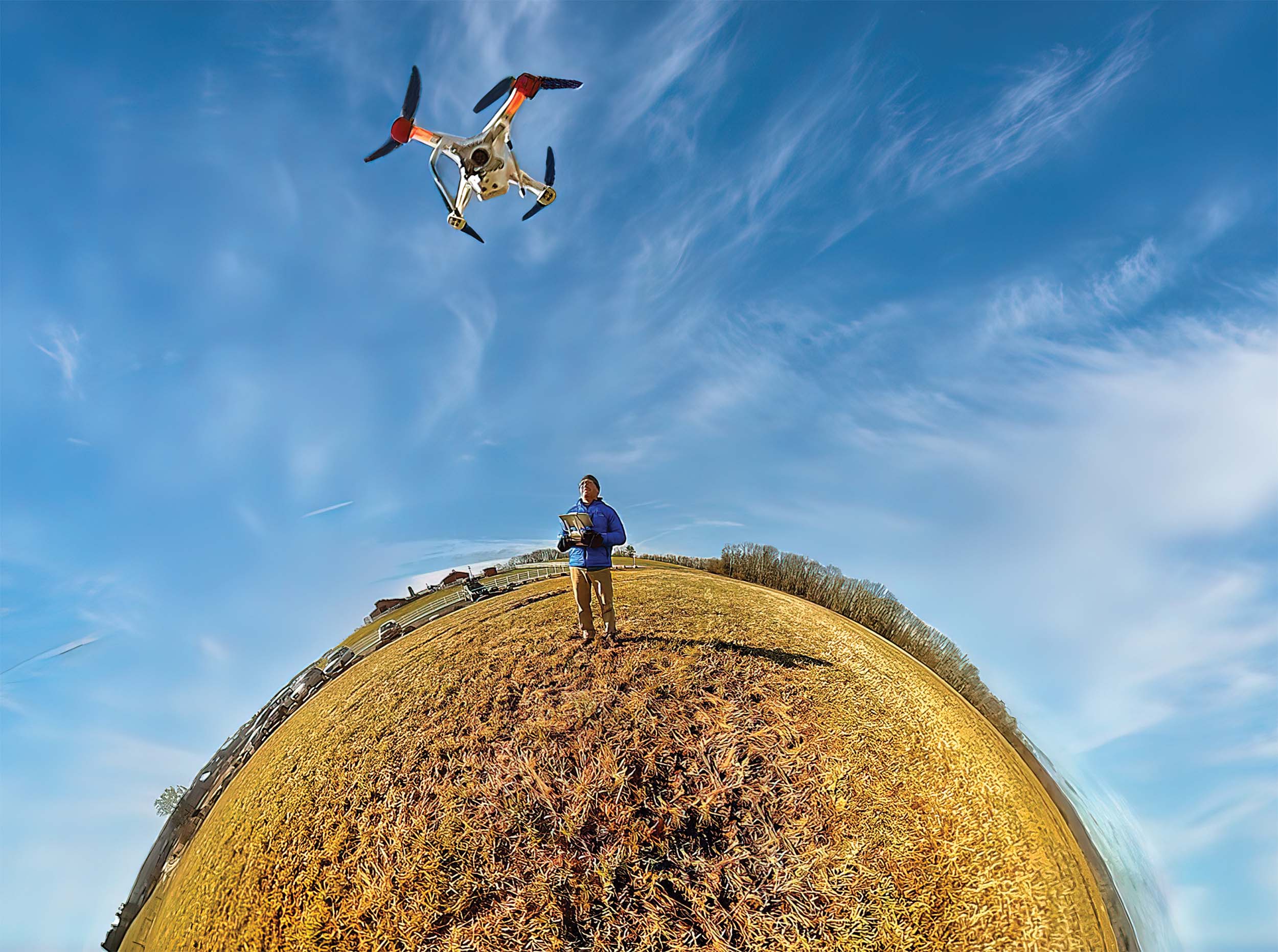 Long-term, sublethal effects. That’s how Levin describes the toll that pollutants take on the majestic and endangered species he studies. There’s no immediate die off, and the problem seems so distant — both geographically and for the species’ survival. But a recent study warned that the current concentrations of PCBs can lead to the disappearance of half of the world’s populations of killer whales from the most heavily contaminated areas within a period of just 30 to 50 years. Levin hopes that coupling his research and his photography will better communicate the urgency of the situation. 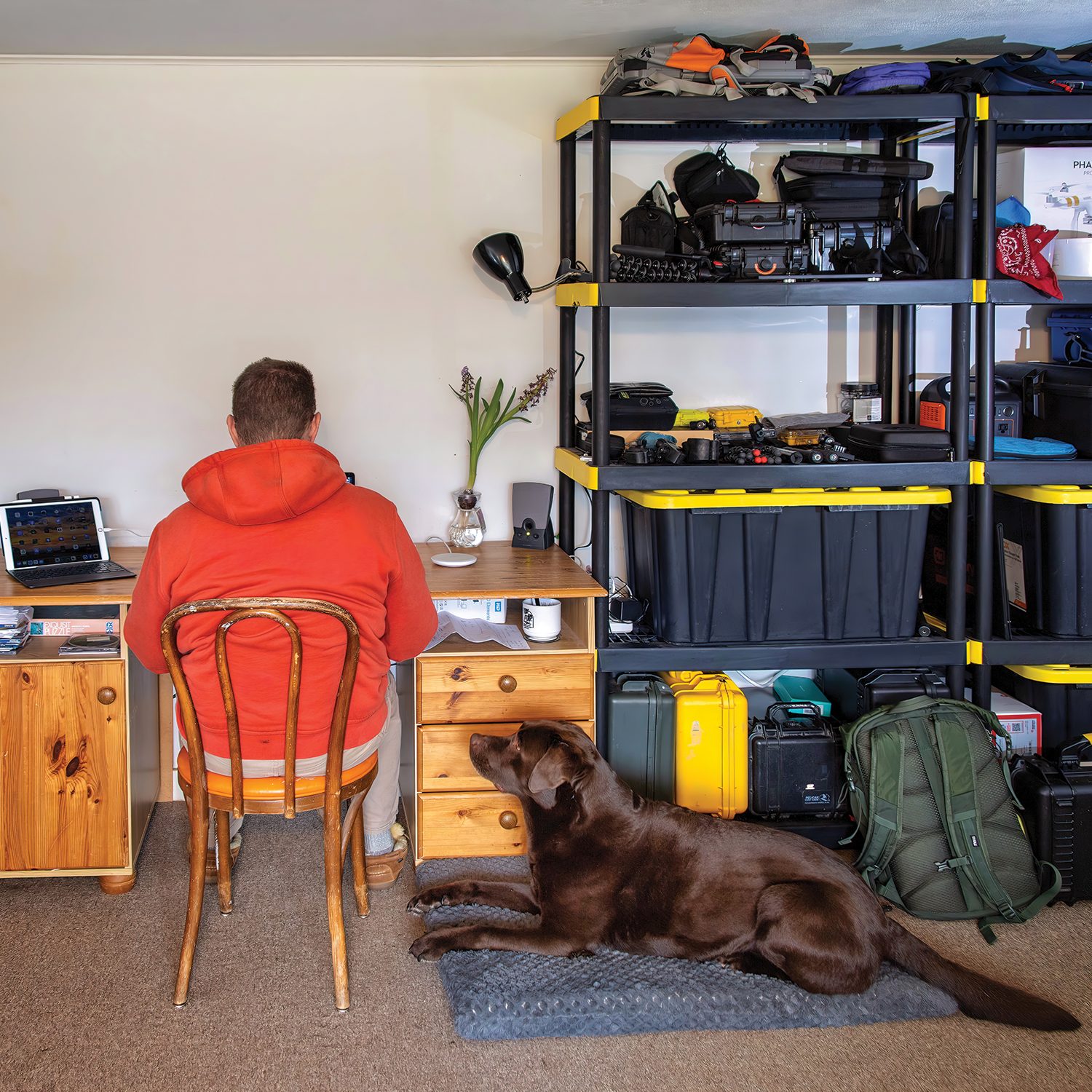 Levin in his makeshift home office with his chocolate Lab, Acadia, a frequent companion on campus photo missions.

Unlike his scientific endeavors, photography allows him to freely incorporate variability and subjectivity. “When you’re in the lab, you have to be very objective. You have to do an experiment the exact same way every time,” he says. Looking through the lens it’s all about new perspectives, even on old things.

“When I walk around campus, I always see things in a new way, because the light is different or it’s a different season. Sometimes it’s worth taking a picture.”