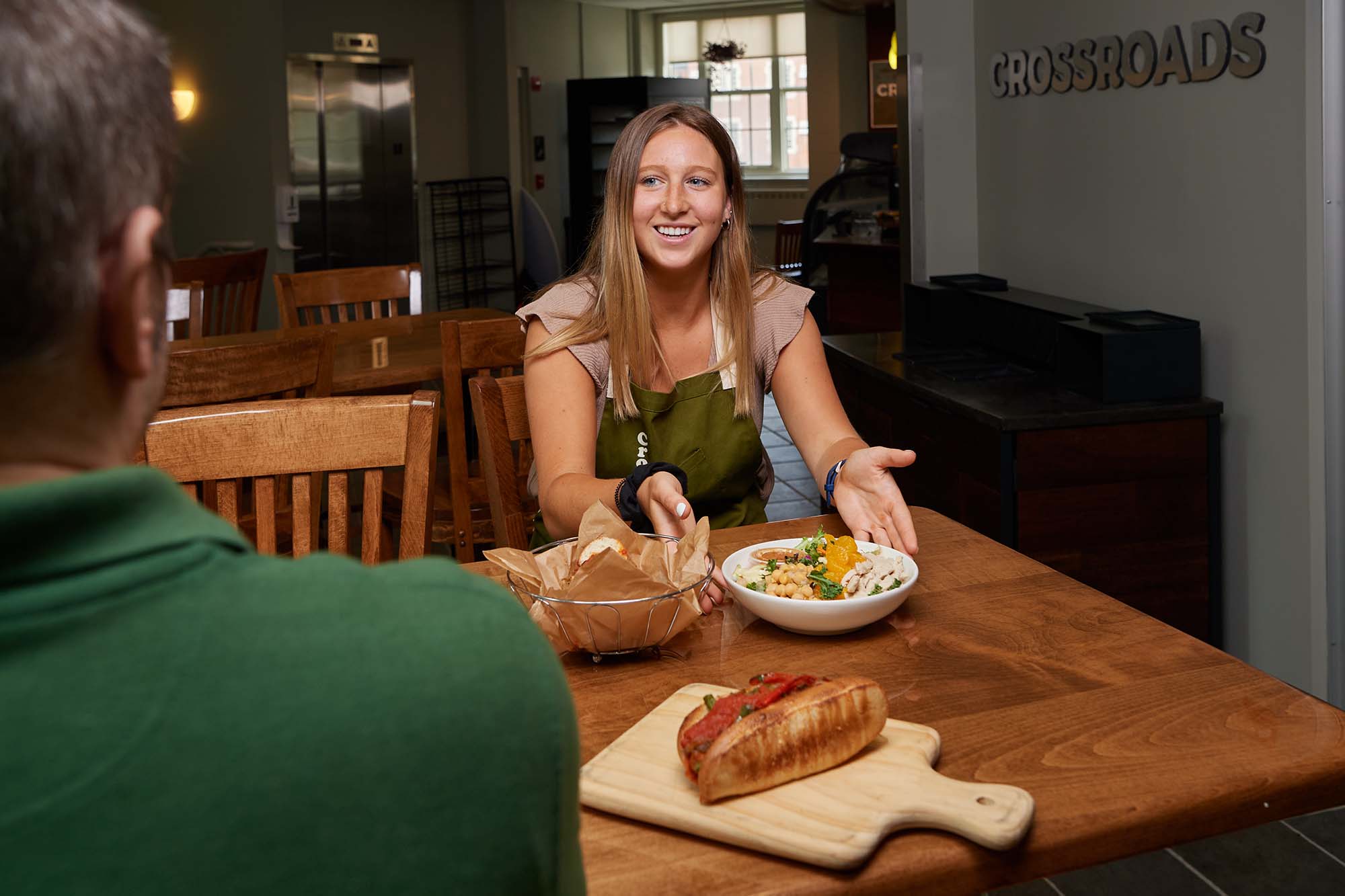 You don’t have to be a full-on vegan or vegetarian to enjoy the newest Storrs campus eatery, CrossRoads Café.

“The name is a play on words, because it’s located in the Wilbur Cross Building,” explains Maddie Pickett ’23 (ENG), who coined the name.

“But hopefully it’s also crossroads between people with all types of diets, because everyone should be willing to try at least cutting back on meat, even if you don’t give it up completely.”

What item on the menu would most tempt the vast majority of students who do eat meat? Assistant director of culinary development Robert Landolphi answers with the cilantro, rice, and bean burrito, which features cilantro lime dressing, black beans, guacamole, vegan cheese, and salsa verde. “Everyone just raved about that one during taste testing,” he says.

Focus groups tested each item on the menu to ensure it would appeal to even the most carnivorous of Husky linebackers. “We left the focus groups so full,” says Pickett with a laugh. 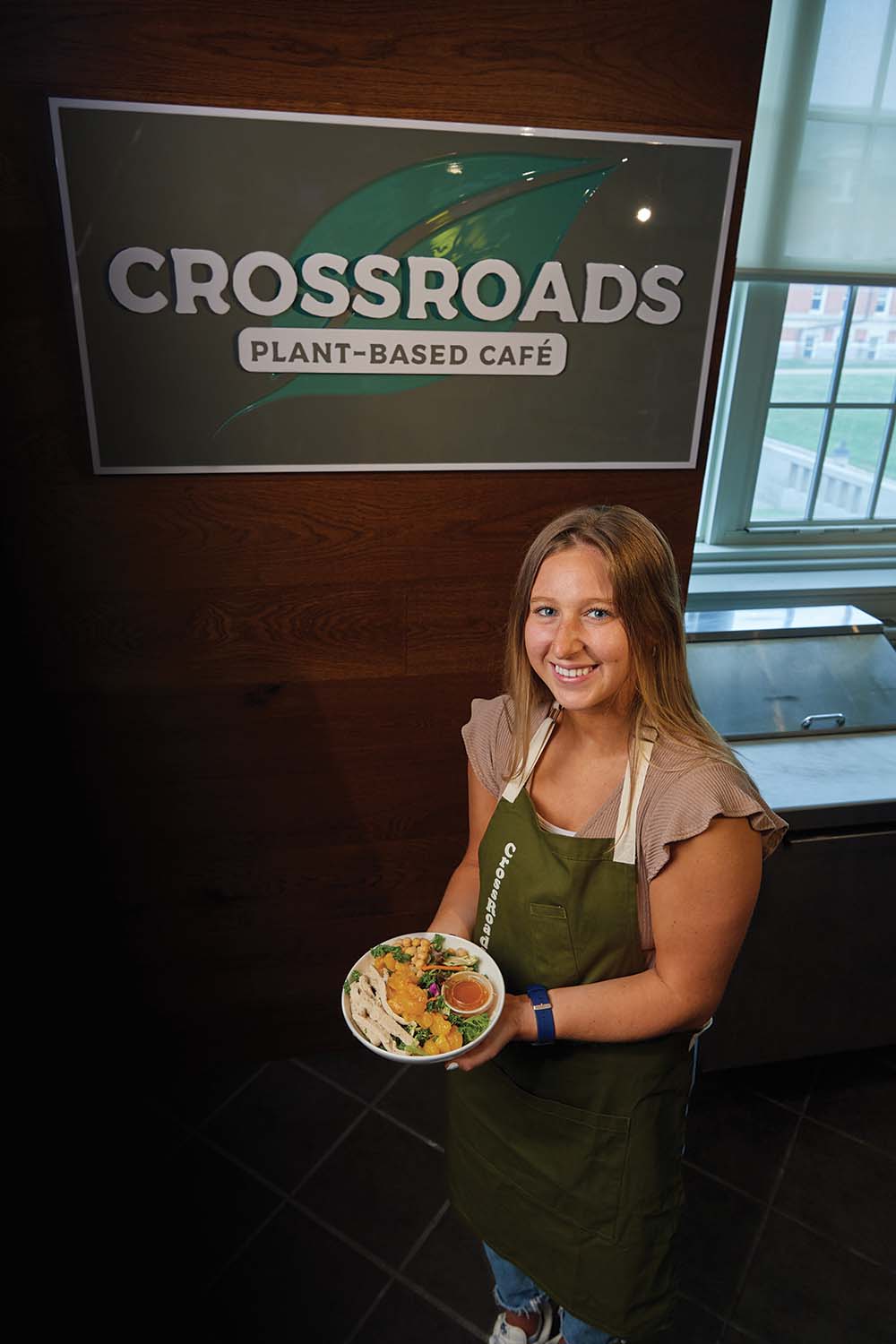 Pickett pitched UConn Dining Services on a plant-based café last October, and Dennis Pierce, who served as director of Dining Services until his retirement this spring, was intrigued. Students could get vegan or vegetarian food options at any dining hall or café on campus, but there was no venue dedicated to plant-based eating.

So Dining Services sent students a survey in January to gauge potential interest. The survey revealed that about 1.5 percent of students on campus are vegan, and 4 to 5 percent are vegetarians, which lines up with overall U.S. percentages according to Gallup surveys. Responses to the café idea, even from the vast majority of meat eaters on campus, proved positive enough that the idea was greenlit.

There were challenges to overcome. “We have all these purchasing restrictions that make things difficult,” acknowledges Ethan Haggerty ’04 (CLAS), an area manager for UConn Dining Services. “Kombucha was not easy to source, for example.”

Much of the food comes from UConn’s Spring Valley Farm, a year-round project started in 2010 that is run by about a dozen students living several miles off campus. They routinely grow about 11,000 pounds of organic vegetables each year, so were happy to have a new primary outlet for their produce.

So what’s on the menu? There’s a spinach, apple, and tangy cheese wrap called Wilbur’s Crossup. A vegan sausage, pepper, and onion grinder called the Chaugie (recipe below) is an homage to the now-shuttered student union restaurant called Chuck & Augie’s, which had a burger called the Chaugie. Haggerty says he wanted to name the eggplant with pesto and broccoli rabe sandwich “the broccoli Rob Landolphi” after his boss, but realized too few would get the joke.

Taking over the space of the former Wilbur’s Café, CrossRoads was renovated with bright paint, wood paneling, and new signs, including one advertising the mission: healthy, wholesome cuisine that nourishes the body, feeds the soul, and helps the planet.

Student employees were hired with a focus on their ability to answer customers’ questions and perhaps bring them into a more plant-based lifestyle for personal health and more macro ecological and environmental reasons. For example, the entire process of creating a single meat burger requires about 660 gallons of water; a mushroom burger requires a fraction of that.

Pickett drew her inspiration for the pitch from a vegetarian restaurant she found at UMass Amherst, which turned out to be a student co-op not run by its dining services. UConn decided to go all in with CrossRoads Café, and Pickett is grateful for the opportunity to spread the message more broadly and create some converts.

“In our society, meat is the center of the dish. Everything else is a side,” she says. CrossRoads is one step to change that narrative. Not just through words, but through action. “I don’t have many friends who are vegetarian or vegan, but everyone who’s heard about the café has expressed interest in trying it right away.” 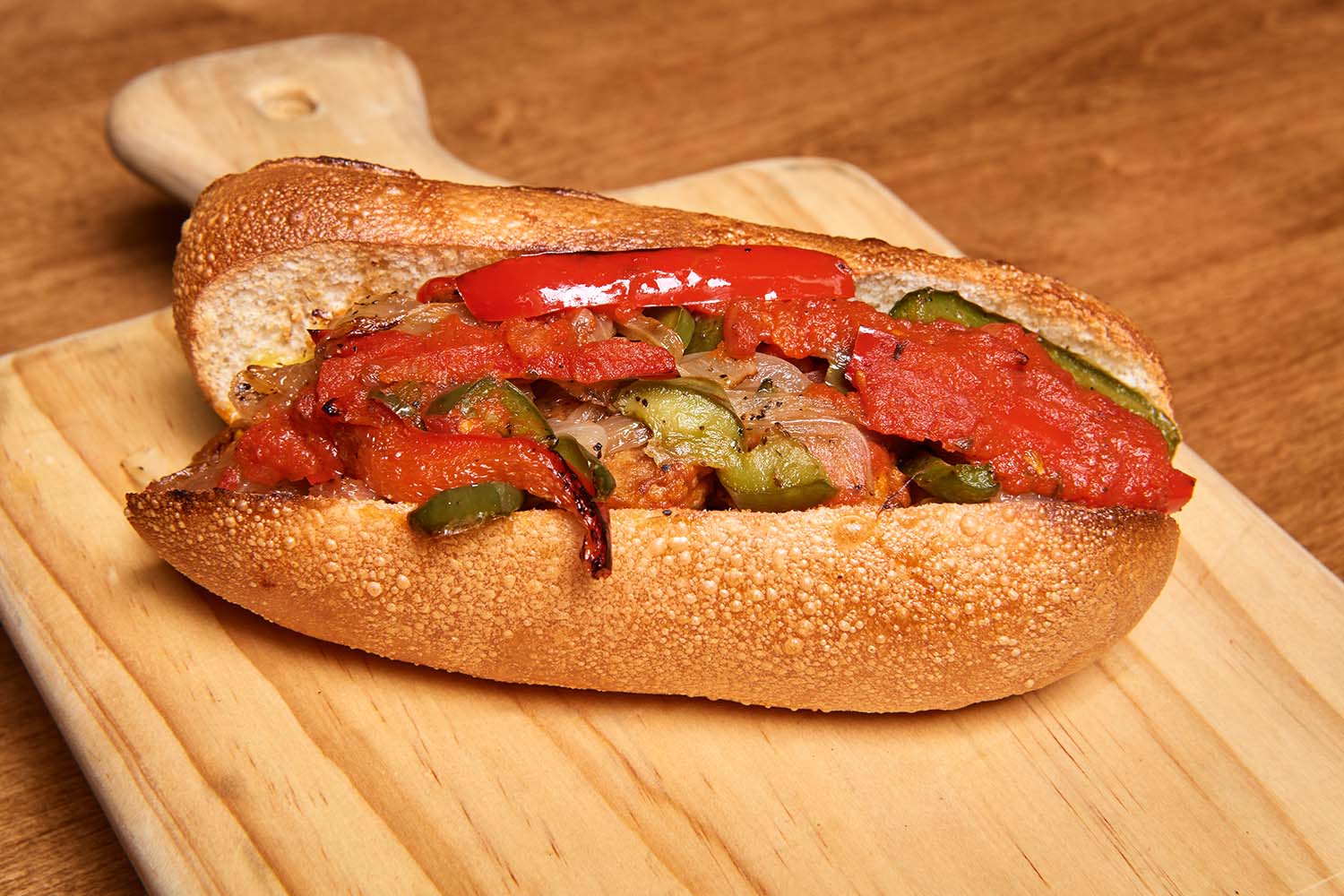 Heat the oven to 350 degrees. Toss together the onions and red and green peppers with the olive oil, salt, and pepper. Place them on half a sheet pan and place the plant-based sausage on the other half. Cook until the veggies and the edges of the sausage are caramelized, about 20–25 minutes.

Place the grinder rolls on a flat surface. Tuck a half slice of vegan cheese into each roll. Divide plant-based sausage evenly among rolls, followed by the peppers and onions.

Top each grinder with 2 tablespoons of marinara and a sprinkle of nutritional yeast. 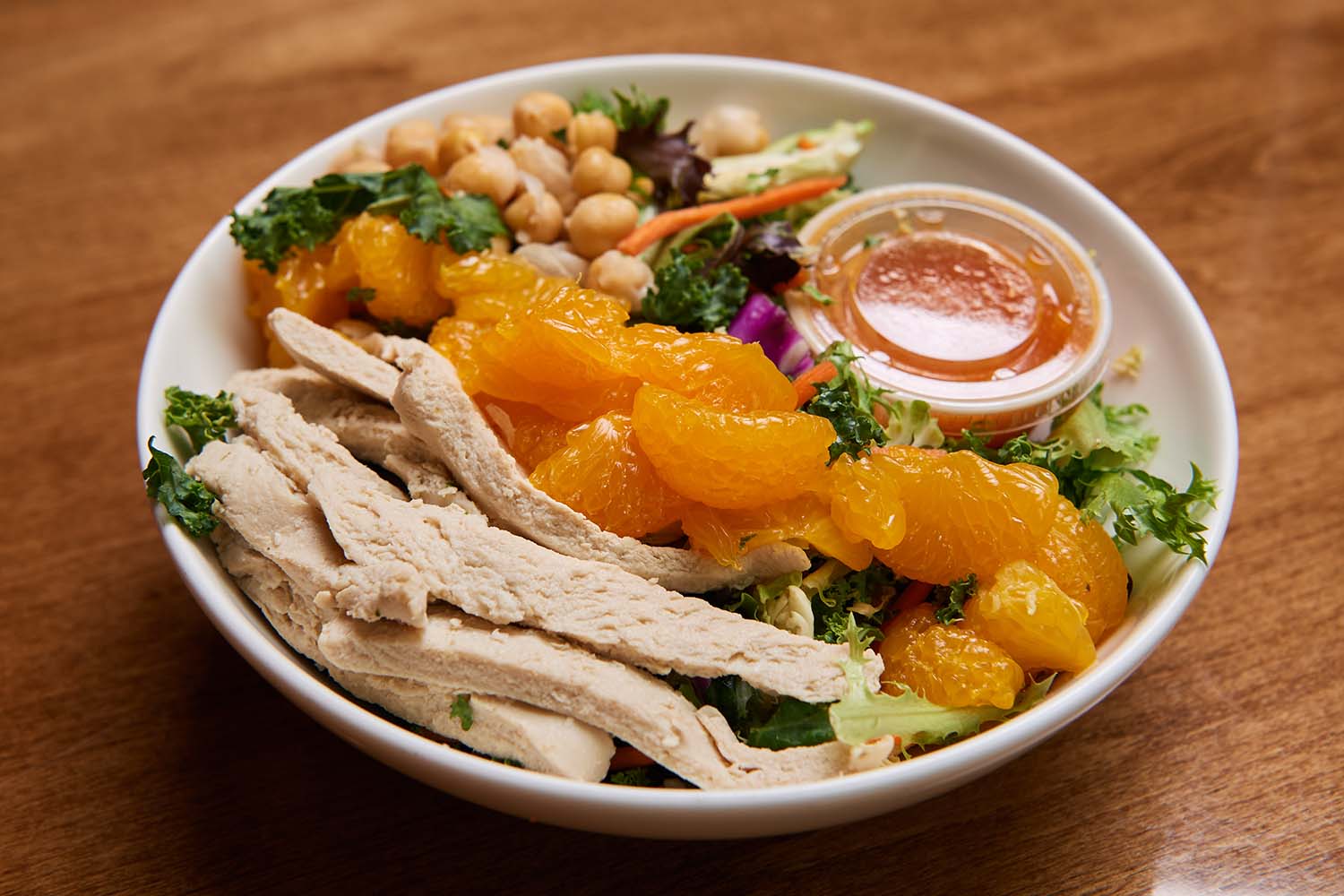 In a small bowl, whisk together all ingredients except for the oil. Slowly whisk in the oil until emulsified.

For the Orange Chopped Salad with Vegan Chicken, serves 1

Mix the spring lettuce mix and baby kale together with the chicken strips. Add ¼ cup of the blood orange dressing and toss until coated. Top with the orange sections and chickpeas.