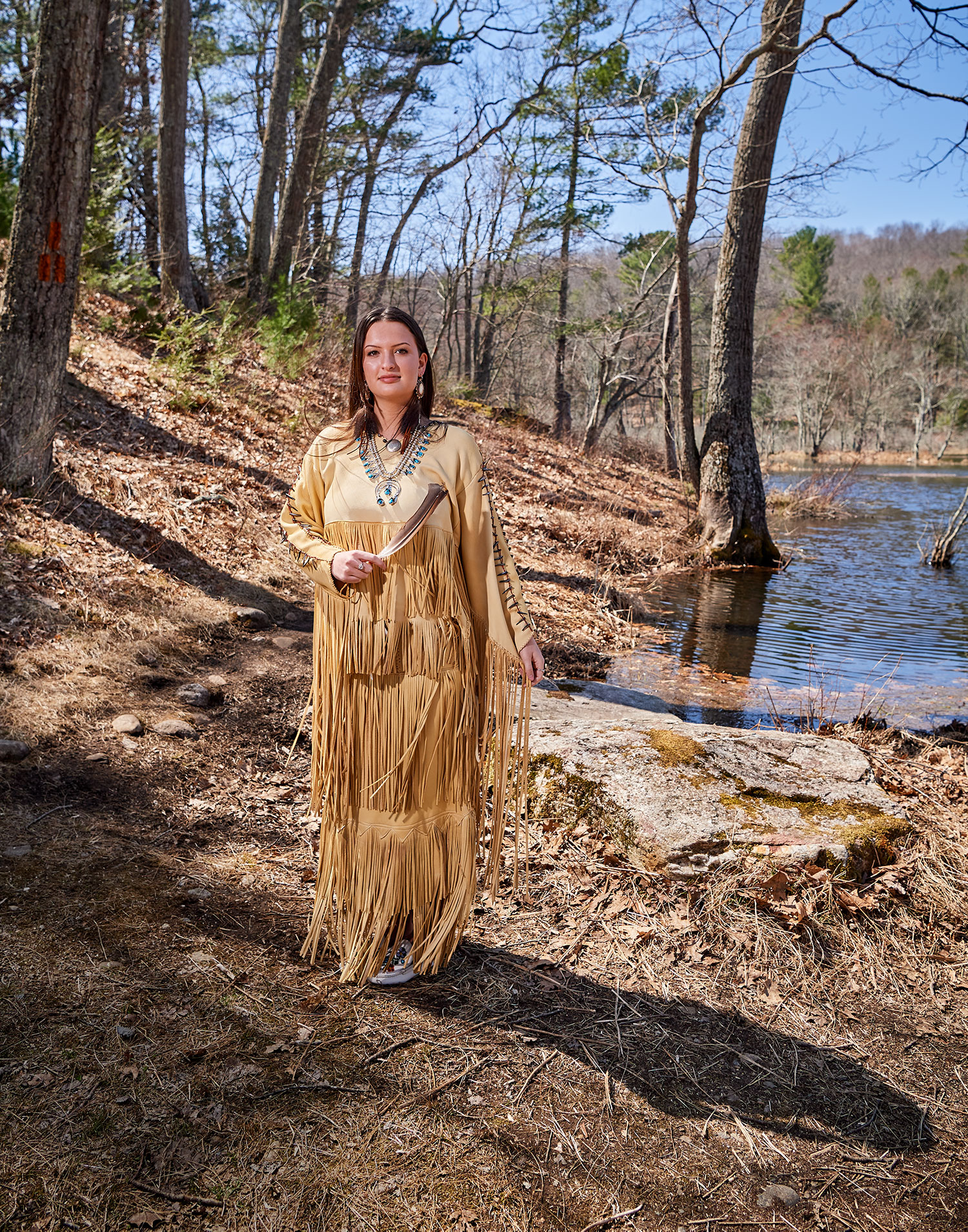 Phillips in her regalia in the UConn Forest.

A “sage” is a mature person who is wise through reflection and experience. It also happens to be the name of the founding president of NAISA, the Native American and Indigenous Students Association, and newly named Truman Scholar and Udall Scholar —Sage Phillips.

Rising senior Phillips hails from Old Town, Maine, and is a member of the Penobscot Nation. She almost didn’t come to UConn. The political science and human rights major wanted to immerse herself in a robust Native American college community. Unsure if UConn’s offerings would be enough for her, she told her parents she wanted to go elsewhere. “Why don’t you take this as an opportunity to build a program?” her father suggested.

“It’s not going to be easy,” Phillips recalls thinking. “But if I can find a few other people, I think we can build something pretty special.” That is what she did. Her freshman year she joined UConn’s Native American Cultural Programs (NACP) and got a job in the Office for Diversity, Equity, and Inclusion, where she helped plan Indigenous Peoples Week and Native American Month.

That wasn’t enough. “We were struggling with student involvement. I thought there must be more Indigenous-identifying students, so I created NAISA,” she says. A place where members can reclaim their cultural identities, NAISA also aims to educate the broader UConn community on native history, cultural diversity, and current events. “It’s going to show prospective students that when they get here, there’ll be a place they can call home. This is the community I so desperately sought to welcome me,” says Phillips, who also mentors local Native youth, represents the NACP on the President’s Council on Race and Diversity, sits on Student Affairs’ Student Leadership Council, and has an ex officio seat in the USG Senate.

Hear Phillips talk about the fight against Native mascots and for tuition reimbursement for Native American students on our Brave Space podcast series at UConn Today.

She stood out from her peers the moment she stepped on campus, according to David T. Ouimette, the executive director of First Year Programs. Every term he leads a class highlighted by a 48-hour marathon “hackathon” in which students seek innovative solutions to challenges. “Most new students get intimidated, but not Sage. She didn’t worry about other people judging her. The strength that she has, the fortitude,” says Ouimette, who hired her to be his teaching assistant for that class the next semester.

A current priority for Phillips, thanks to a grant she secured with the help of Kiara Ruesta of the Office of Diversity, Equity, and Inclusion and human rights and education professor Glenn Mitoma, is gathering data about how UConn obtained its land from seven local tribes. “The goal is to get UConn talking about this expropriation and to seek free tuition for Native students,” she says. “I’m really interested in looking at how we can provide reparations for those whose lands UConn occupies.”

Phillips has also joined a coalition seeking a state ban on American Indian sports mascots. “I’ve lived the negative repercussions that racist mascot imagery can have on Native youth,” she says. Because mascots have dark skin and hair, according to her “the dominant society” uses them against Native Americans who have lighter skin, saying in effect, “You don’t look like an Indian. So you’re not one, and we won’t allow you to be one.”

“That’s why Native youth lose confidence. At your core you know who you are — you know you are Penobscot — but when people constantly look at you on a surface level, it builds up over time and has such a negative effect,” says Phillips, who plans to attend law school and work on a joint degree in American Indian studies.

She says she learned her leadership skills from her father and grandfather. Both men helped lead a decade-long effort by the Penobscot River Restoration Trust that removed two dams and bypassed a third to open nearly 1,000 miles of river and streams to salmon for the first time in nearly 200 years. Their effort involved the state of Maine, the federal government, power companies, conservation groups, and the Penobscot Nation.

“The river was the Penobscot’s highway,” says Phillips. To commemorate its reopening she and her father took part in a 15.5-mile race in a 12-person war canoe. Her grandfather gave her a medicine pouch so she could bring her ancestors down the river with her, and during the ceremony he led before the event, an eagle soared overhead. “It was such a powerful moment,” she says.

She credits both men for raising her to cherish her heritage. “You are here because of your ancestors. It’s your duty to use the opportunities they gave you and take them to their fullest extent,” says Phillips. “That’s what my grandfather taught me time and time again, and that’s what I center my work on. My ancestors did it for me, and I have to do the same for future generations.”