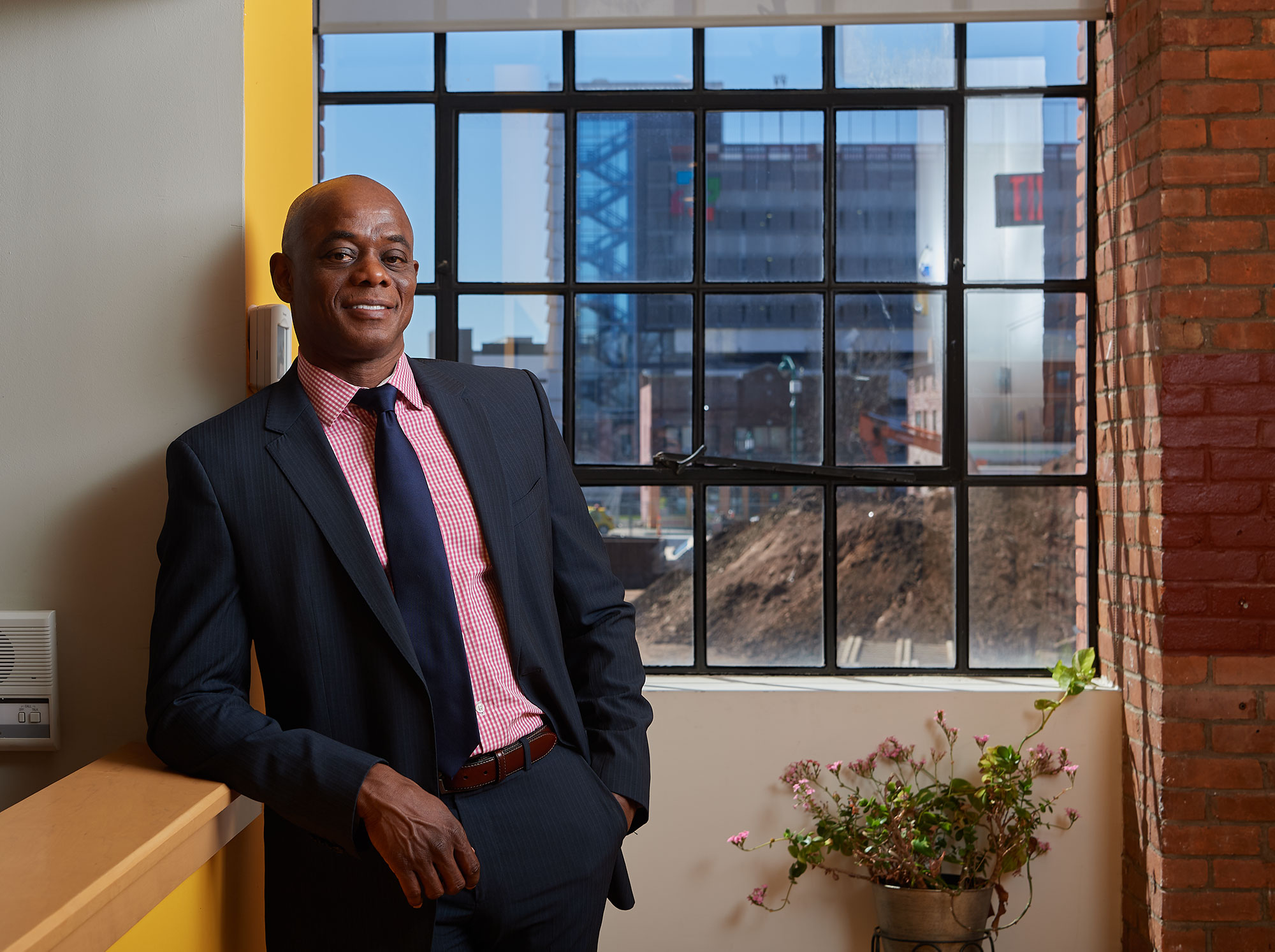 Freeman in his Hartford office with the Park and Main development under construction behind him.

Growing up in Jamaica, Rohan Freeman could not have envisioned himself as an engineer, re-creating the Hartford landscape. And he certainly could not have seen himself as the first Black American to climb the Seven Summits.

ohan Freeman doesn’t use the word trailblazer to define himself, though the paths he’s blazed have been quite extraordinary.

Growing up poor in Jamaica, there were times, he says, when he couldn’t see what life might hold for him.

In high school, he moved with his mother to the North End of Hartford and found himself having to navigate a very different world. But the people in that community made him feel like part of the place. “Coming from Jamaica and not knowing anything about this country, this was my door to having the opportunities that I have now,” says Freeman ’95 (ENG). “I wanted to have a good education, and doing my research, UConn was at the top of my list because of its engineering program.”

Rohan Freeman doesn’t use the word trailblazer to define himself, though the paths he’s blazed have been quite extraordinary.

Growing up poor in Jamaica, there were times, he says, when he couldn’t see what life might hold for him.

In high school, he moved with his mother to the North End of Hartford and found himself having to navigate a very different world. But the people in that community made him feel like part of the place. “Coming from Jamaica and not knowing anything about this country, this was my door to having the opportunities that I have now,” says Freeman ’95 (ENG). “I wanted to have a good education, and doing my research, UConn was at the top of my list because of its engineering program.”

From the start he liked how welcoming the School of Engineering was and how rigorous. “I made lifelong friends at UConn, and they still say they could find me in one of three places: in class, at the field house after class training for track [he ran the 400 meters and for some time held UConn’s indoor record in that event], and in the library — Three South — same table, same chair every day, studying. Whoever wanted to find me could go there.”

Though he was majoring in mechanical engineering, Freeman couldn’t quite envision his future until after freshman year when he got a summer internship with Oswald Blint, Hartford’s city surveyor. “The first time he sent me out to work on a survey site, I knew I’d been doing the wrong thing all along,” Freeman says. Everything about civil engineering fit. “I understand it intuitively,” he explains. “This is what I was born for.” His first day back to campus that fall he changed his major to civil engineering, and in his first class he met professor Roger Ferguson who, like Blint, became a mentor.

“I hope I can influence kids who were in my position ... let them see what’s possible.”

Both imbued in Freeman a sense of land first, encouraging him to look closely at and listen to the land. To this day, his approach centers on “working with the land instead of forcing the land to be something it’s not meant to be, working to maximize the use and get the most return, but preserving the integrity of the land.”

He also knew, as the only Black student in his civil engineering classes, that one day when he had the chance to find ways to help make the field more representative, he would.

Today, he is president of Freeman Companies LLC, an award-winning, multidisciplinary site development, engineering design, and construction services enterprise, one of the few minority-owned engineering firms in the region. Based in Hartford, Freeman Companies provided building and construction survey and layout services to Dimeo Construction Company for the $120 million Edward P. Evans Hall at Yale University and redesigned Weaver High School in Hartford. It also is working with the Metropolitan District Commission, handling the geotechnical engineering and land surveying for a major component of the $280 million South Hartford Conveyance and Storage Tunnel, a four-mile-long tunnel that will protect Connecticut waterways during major storms.

His firm has worked on large-scale, transformative public projects across the state and is part of a development team with Spinnaker Real Estate Partners LLC in Norwalk, creating a mixed-use project at the corner of Park and Main Streets in Hartford. It’s also at work on a $21 million development project featuring apartments and retail space on Albany Avenue and Woodland Street in Hartford, an area where Freeman says there hasn’t been significant development with private funds in more than 50 years.

“I always have an eye for how I can help the city move forward,” he says. “That’s the reason I put my business here in Hartford. I feel like I’m part of the fabric of the city and want to be part of the solution to turning Hartford around. Though I lived in the North End for a short time, Hartford was very influential in shaping my life. I want to contribute to community development, to create jobs, housing, and opportunities for residents there.” 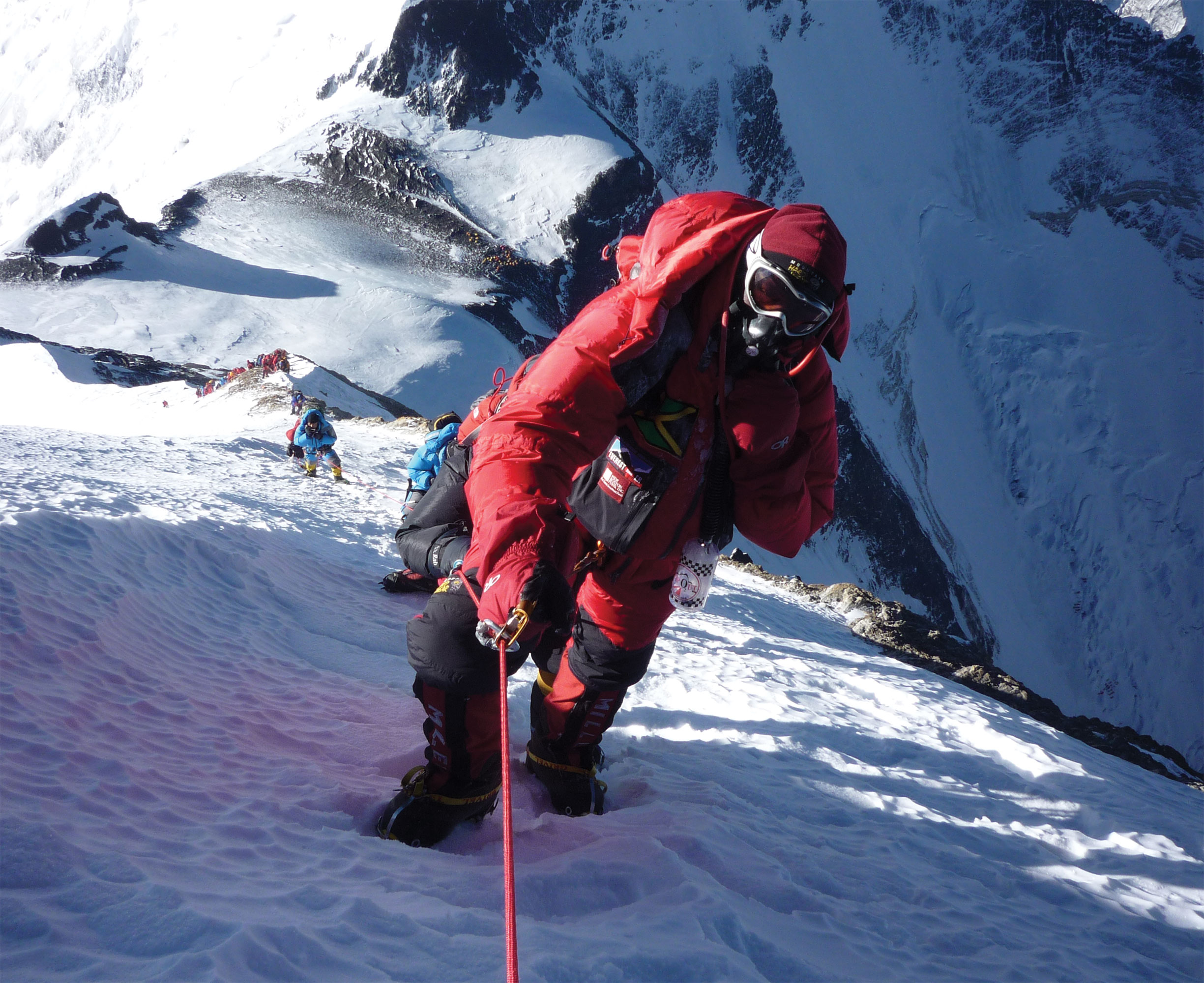 On the way to the summit of Mount Everest at 28,500 feet. Photo courtesy of Rohan Freeman

Growing up in Jamaica, Freeman loved to run, and he played cricket and soccer with his friends. They often talked about Mt. Kilimanjaro but not about climbing it. “I grew up hearing about Kilimanjaro, and my friends and I joked that we’d banish people we didn’t like to Kilimanjaro, this mythical, fictional place,” he says.

Just a couple of decades later, that mythical place would become very real to him. Though he’d “never heard of mountaineering as a kid,” Freeman met a group of friends after college who, like him, loved being active and being outside. They decided they would try to climb the highest point in Africa, — Kilimanjaro in Tanzania. When he reached the summit, Freeman says he was absolutely hooked on climbing. 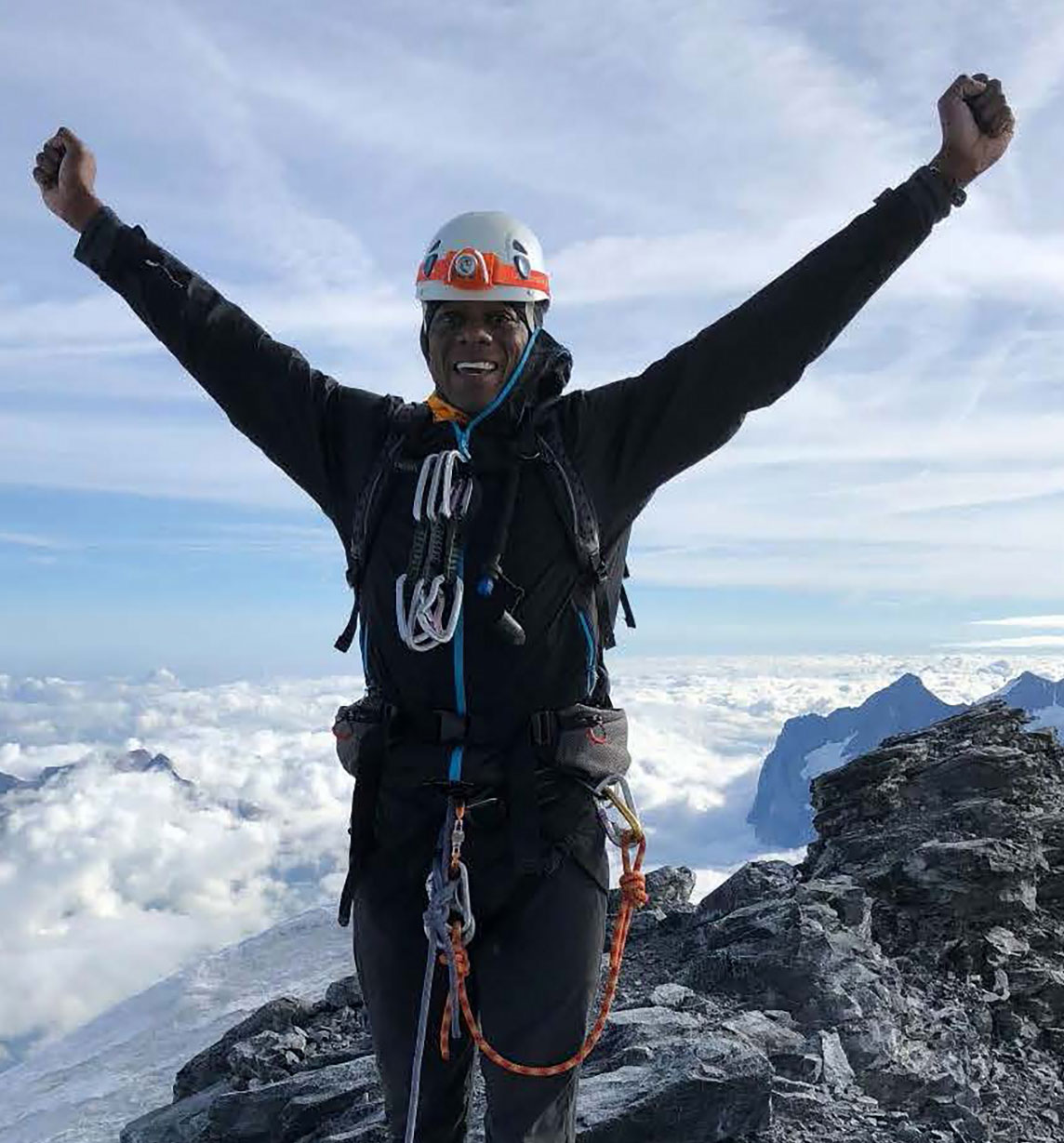 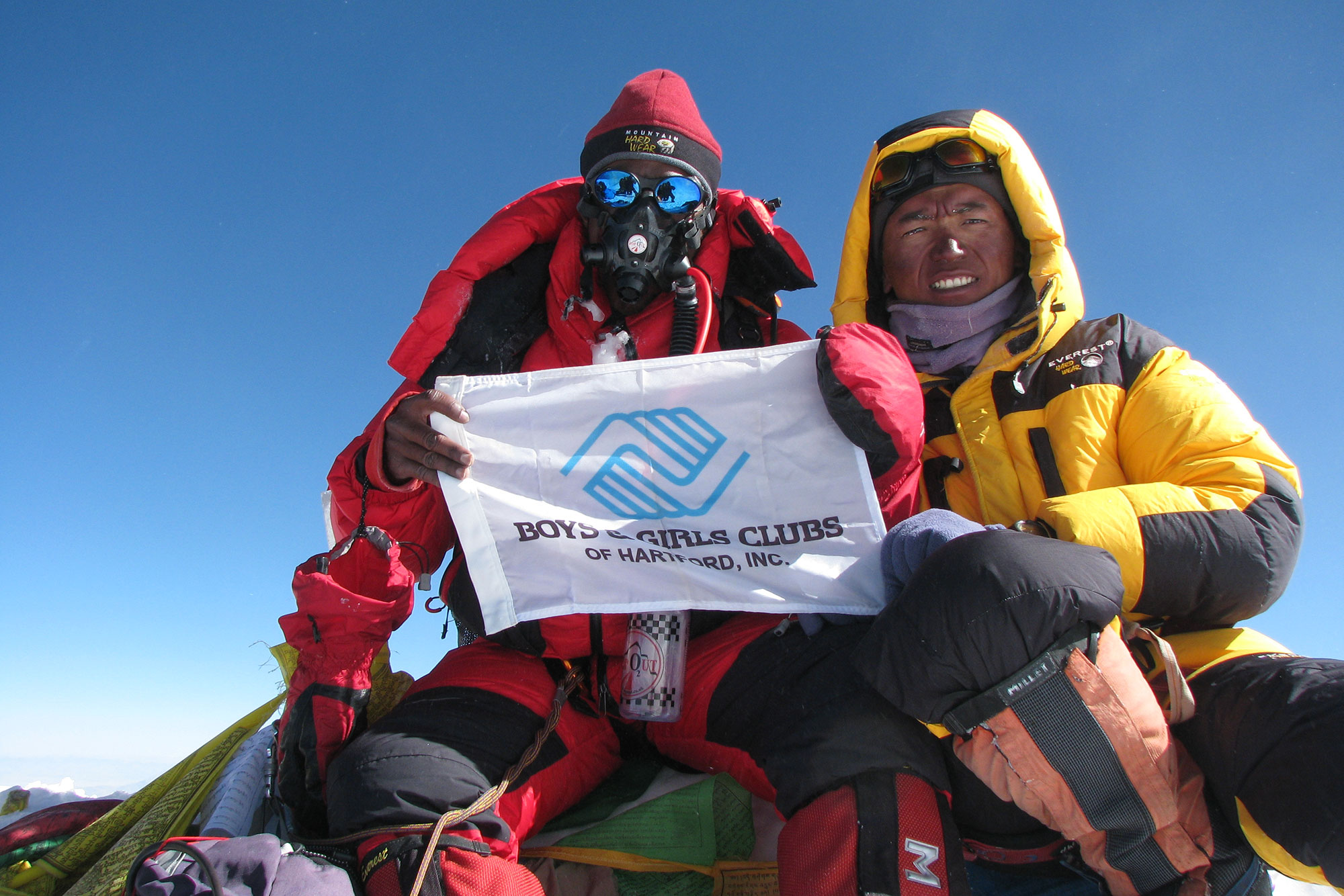 On the summit of the famed Eiger in Switzerland (top) and Mount Everest — on that climb Freeman raised funds for the Boys & Girls Club of Hartford. Photos courtesy of Rohan Freeman

He set his sights next on Denali in Alaska, climbing North America’s tallest peak. He then climbed Mt. Elbrus in Russia, the tallest peak in Europe, and Cerro Aconcagua in Argentina, the highest summit in South America. He started to wonder if he could reach the top of Mt. Everest and if he could eventually become one of the few people to reach the Seven Summits, the tallest peak on each continent.

He took mountaineering courses, honed his skills, and spent nearly every winter weekend training in the White Mountains. He had tried Everest once before and didn’t reach the top. By then, Freeman was a principal at an engineering firm, and when he asked for time off to tackle Everest again, he was told no. He decided two things right then — he’d start his own engineering firm and he’d make that climb.
On May 19, 2009, Freeman became the first Black American and first Jamaican-born person to reach Everest’s summit. “Two things are indelibly imprinted on my brain that I’ll never, never forget,” he says. “I was climbing up to the summit before 4 a.m., and I looked to my right and was looking down at this teeny tiny light way in the distance. I was so distracted by it, the light; I was taking one foot forward, then I’d look at the light. I realized it was the sun coming up over the horizon except it was below me. It was the most spectacular light show I’d ever seen.”

The second moment happened when he reached Everest’s summit and saw the curvature of the Earth. “I was blown away when I looked out and I could actually see it with my own eyes,” he says. “It was amazing.”

After climbing Vinson Massif in Antarctica in 2011 and Oceania’s Carstenz Pyramid in Indonesia in 2012, he became the first Black American to reach each of the Seven Summits. 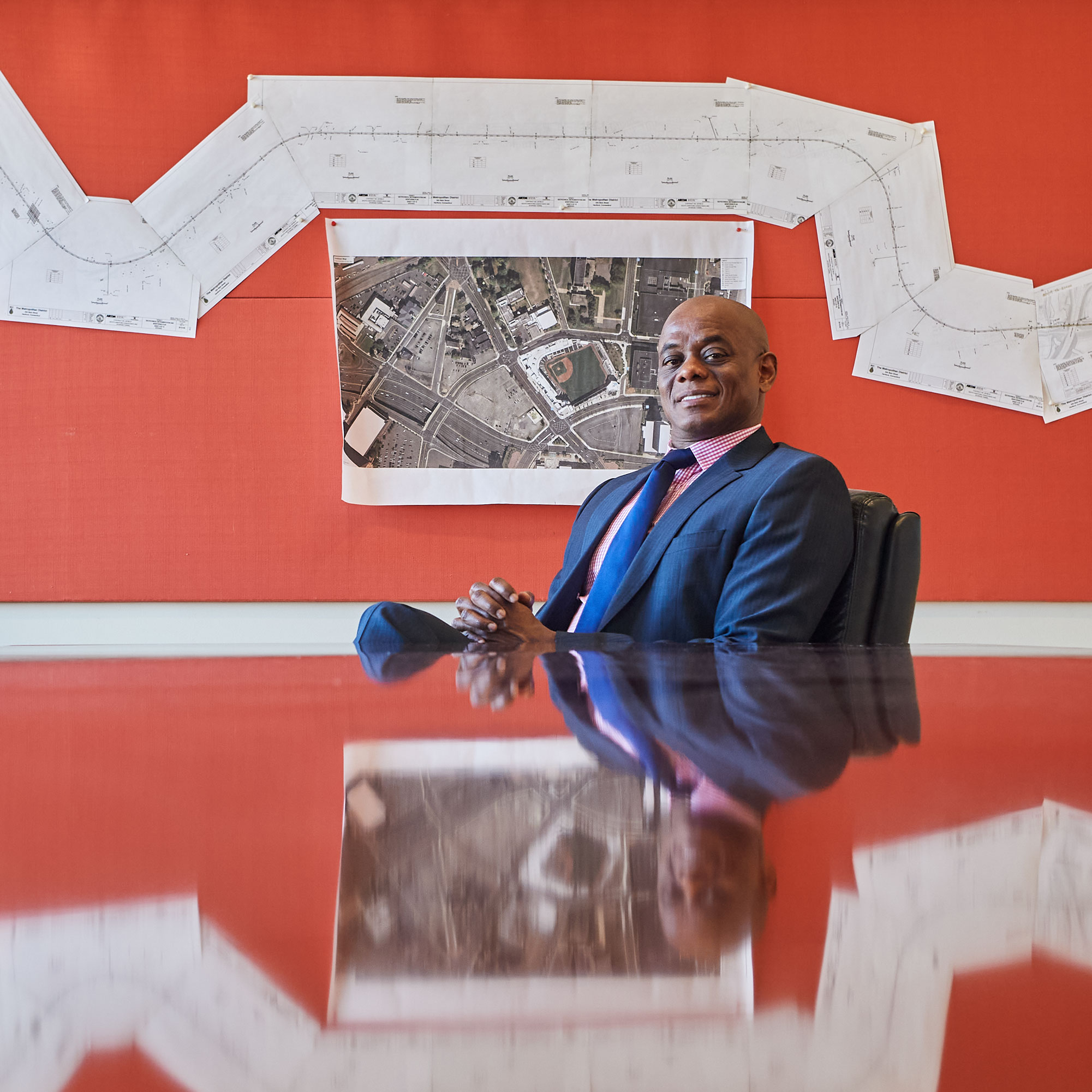 In the board room with representations of Dunkin’ Donuts Park and South Hartford Conveyance Tunnel.

Beyond the achievement itself, Freeman says, the climbs enabled him to see so much of the world, its cities, and many obscure, beautiful, tucked away places. “A lot of these places are surrounded by World Heritage sites, which you’d never see unless you are doing these really remote trips,” he says.

Another benefit has been raising money during each climb for causes he cares deeply about, including the Boys and Girls Club of Hartford and the BRIDGE Endowed Engineering Scholarship, which he established through the UConn Foundation to support students with an interest in civil engineering, especially those who have overcome socioeconomic or educational disadvantages.

“That’s very important to me,” he says. “I hope I can influence kids who were in my position, who are kind of feeling hopeless, not seeing a path forward. I want to inspire them and let them see what’s possible.”

He speaks often to school groups and serves on many boards, including those for Connecticut Business & Industry Association and Outward Bound. In 2015, he was inducted into the UConn School of Engineering’s Academy of Distinguished Engineers and Hall of Fame. “It meant the world to me,” Freeman says. “I have my medallion and my program booklet to show my daughter as something for her to aspire to.”

His climbs behind him, Freeman plans to run a marathon on each of the seven continents and the North and South Poles — once the pandemic has ended and people are traveling again. And he’ll continue to seek out projects in the profession he says has given him so much. “I do think I have a lot more to accomplish, a much longer way to walk.”