They had waited long enough. UConn’s classes of 2020 and 2021 gathered in person at The Rent for five days in May to celebrate endings and beginnings — together.

By Lisa Stiepock
Photos by Peter Morenus and Sean Flynn

t was coming home,” U.S. Secretary of Education Miguel Cardona ’01 MA, ’04 6th Year, ’11 Ed.D., ’12 ELP said of heading to Pratt & Whitney Stadium at Rentschler Field to give this year’s commencement address. Students could not have agreed more. At a string of outdoor ceremonies May 8–12, students and families gathered together for the first time in many long pandemic months.

“It was coming home,” U.S. Secretary of Education Miguel Cardona ’01 MA, ’04 6th Year, ’11 Ed.D., ’12 ELP said of heading to Pratt & Whitney Stadium at Rentschler Field to give this year’s commencement address. Students could not have agreed more. At a string of outdoor ceremonies May 8–12, students and families gathered together for the first time in many long pandemic months.

Saturday’s celebration brought 2020 grads, whose ceremony last year was entirely virtual, home to UConn from across the country. “We have seen over this past year that love knows no distance. Whether six feet apart, or a Zoom call away, we Huskies are always there for each other: today, tomorrow, and every day after that,” said Tanya Miller ’20 (CLAS).

The mood at The Rent every one of those days was often euphoric, the tableau rife with fist pumps, hugs, and kisses. But there was a palpable sense of shared purpose, too — to remember this time, who we lost, and what we lost — and to carry it all forward.

Tanya Miller '20 gives the student remarks during the Class of 2020 Commencement ceremony at Pratt & Whitney Stadium at Rentschler Field in East Hartford on May 8, 2021.

Cardona, who gave the commencement address for the class of 2021, and whose godson, Hector Cardona III, graduated in the Neag School of Education, said he could feel that heightened sense of commitment in the graduates. 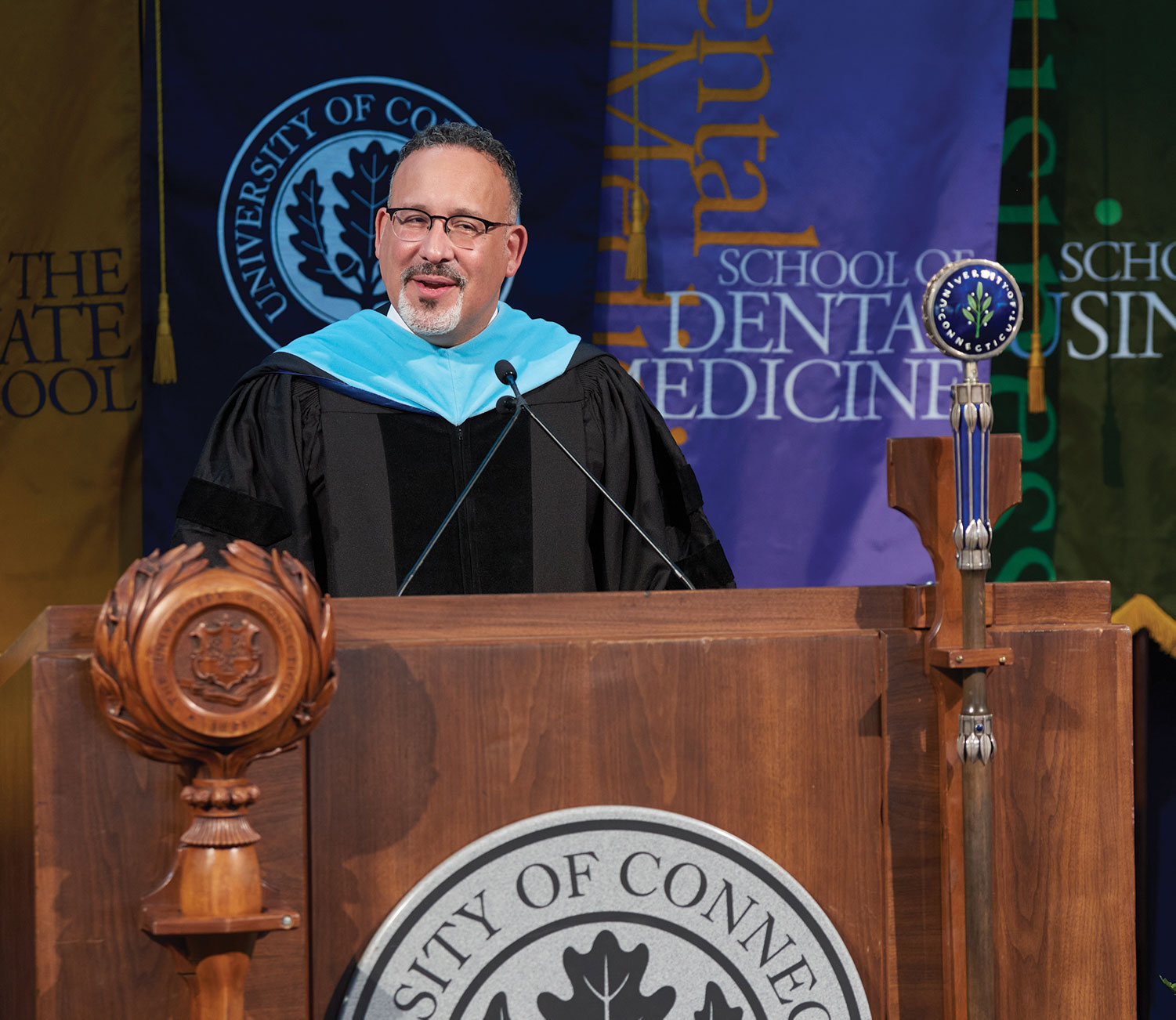 “I know they’re graduating with a passion to serve that’s been strengthened by the challenging year we’ve had,” he said later that week. “It’s powerful. It’s like we’ve all suffered together and now, how privileged are we that we get to be in a position of service when our country needs us most?” 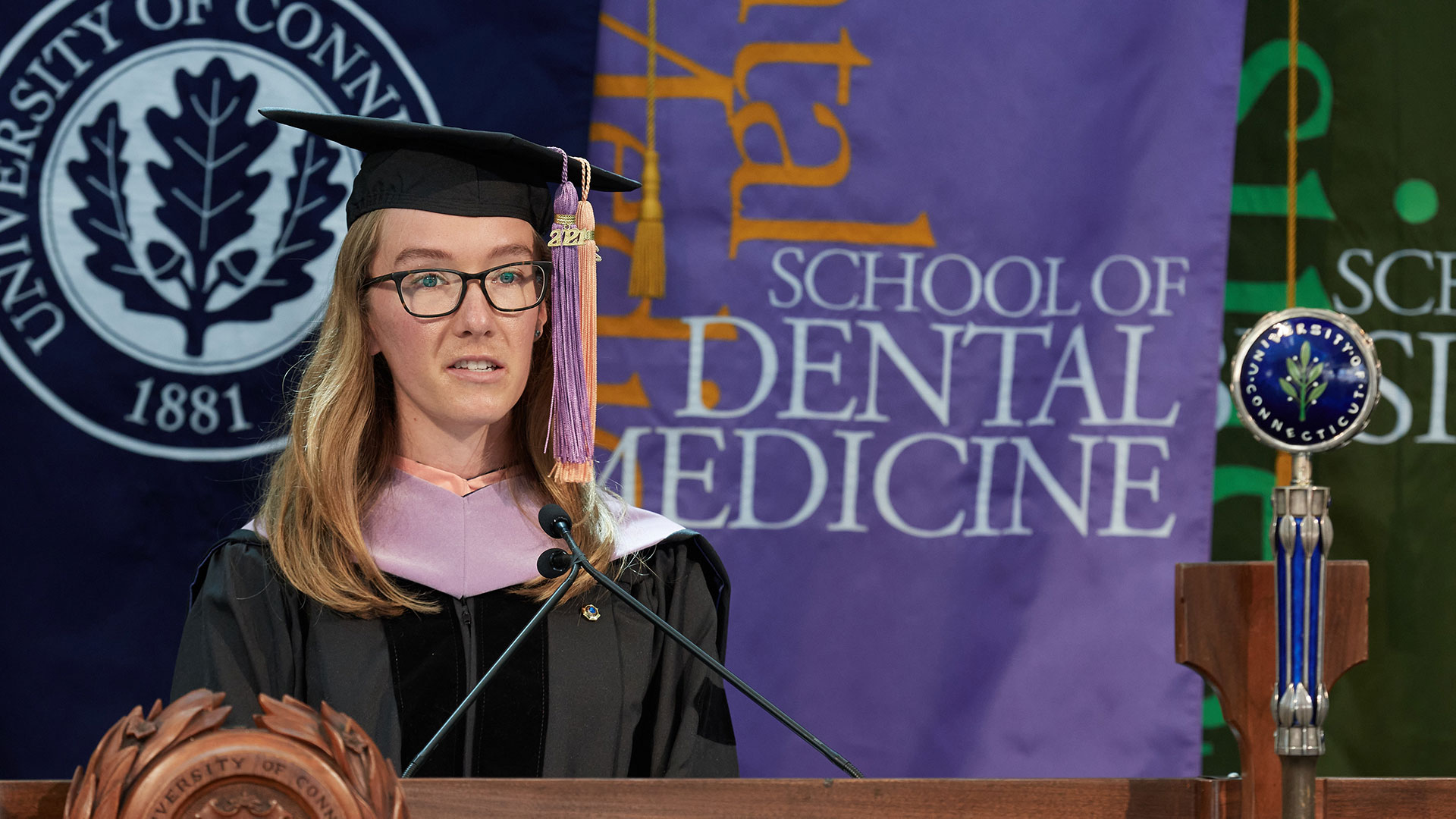 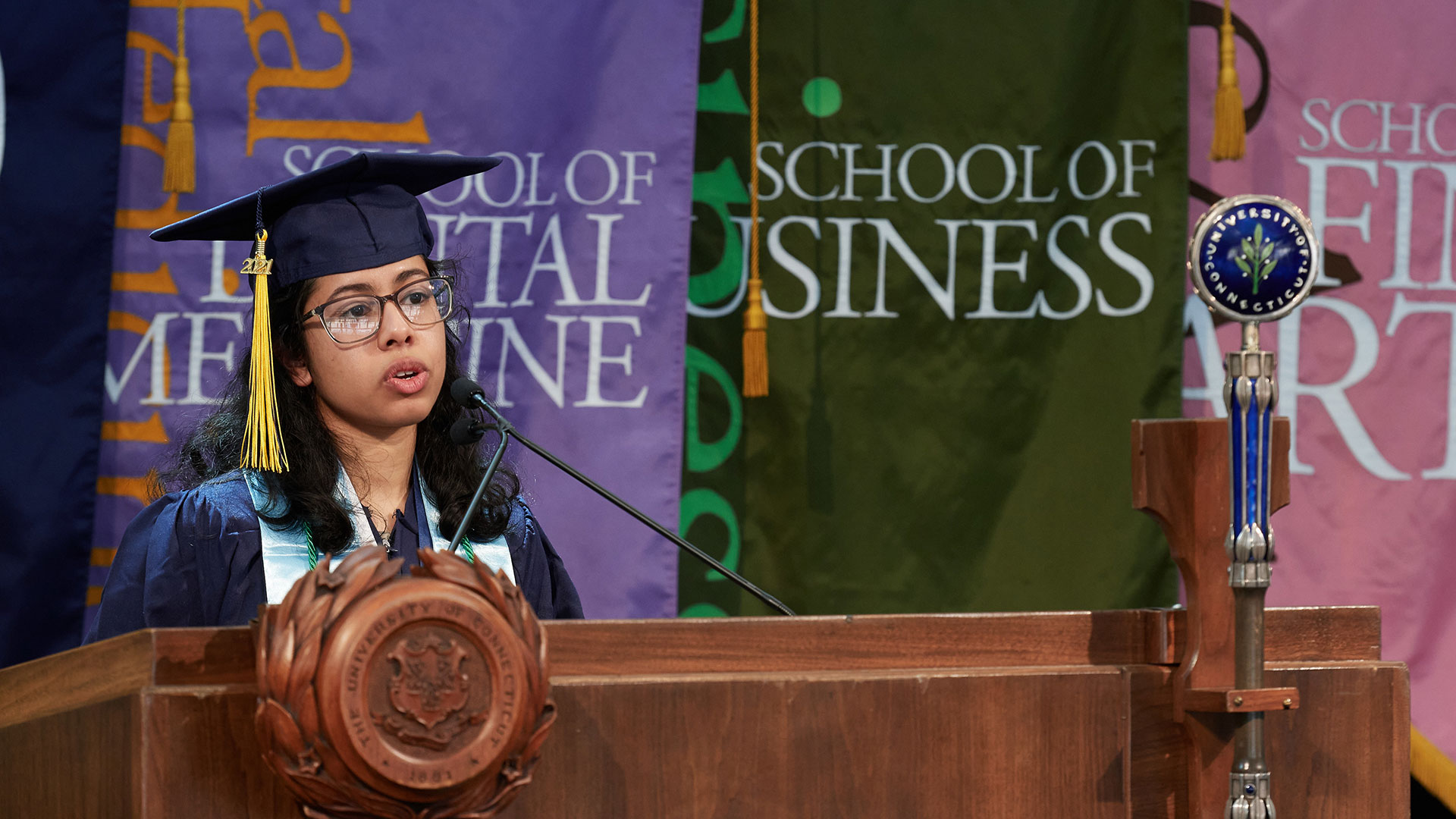 Said Katherine Merrick ’20 MD, “Most of us graduating today are millennials — a generation searching for drive, passion, and meaning in our professional lives . . . Our class has intimate knowledge of the interrelated mental health, substance use, suicide, and gun violence crises in our country. For us, these areas will never be purely academic.”

When all was said and done, though, as Shaharia Ferdus ’21 (CAHNR, CLAS) put it, “No matter how they play out, every single one of our stories will have one thing in common: that we all made it thanks to UConn. Long after the credits have rolled and the pages have turned on our UConn story, we remain Huskies, and we’ll stay Huskies forever!” 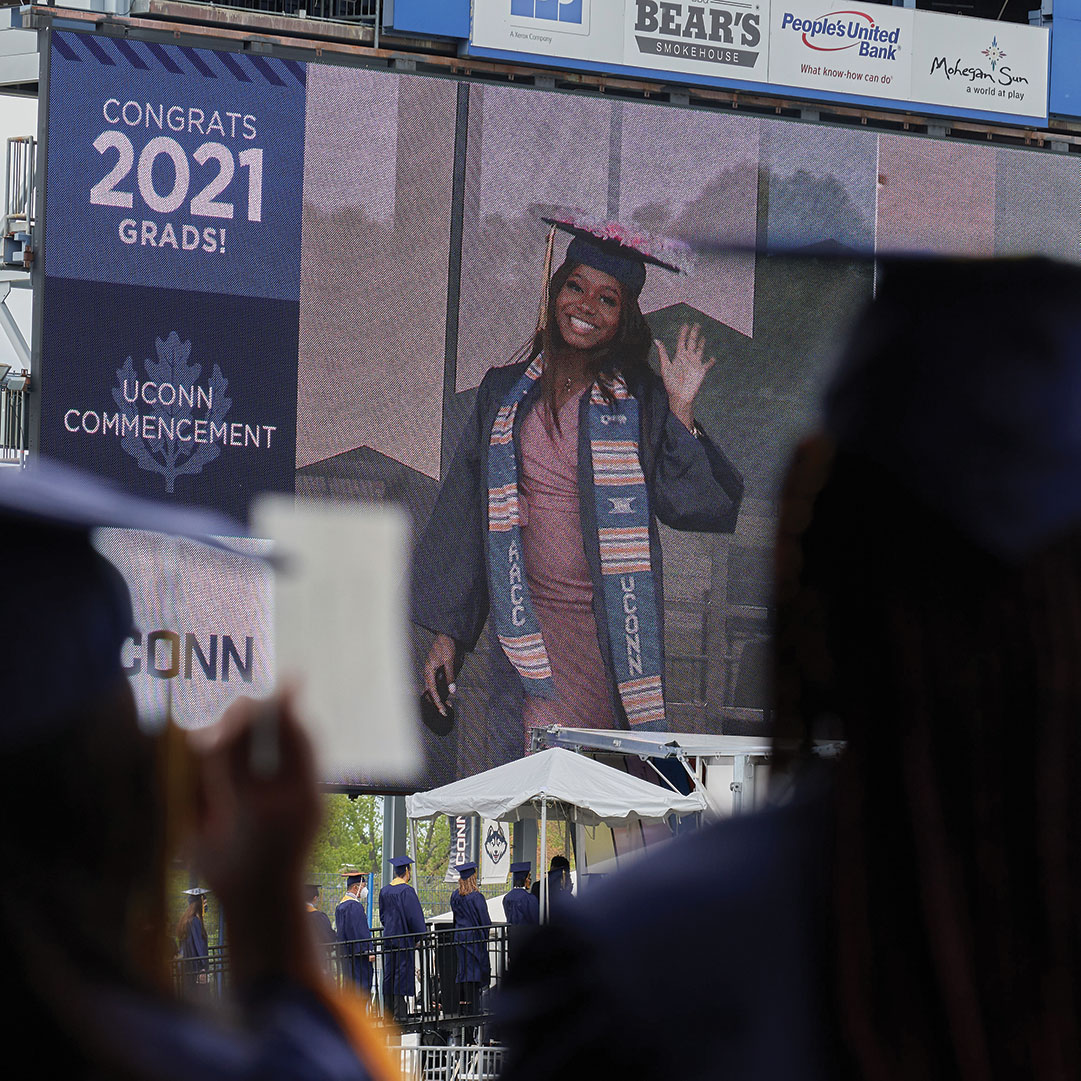 CLAS on the jumbotron 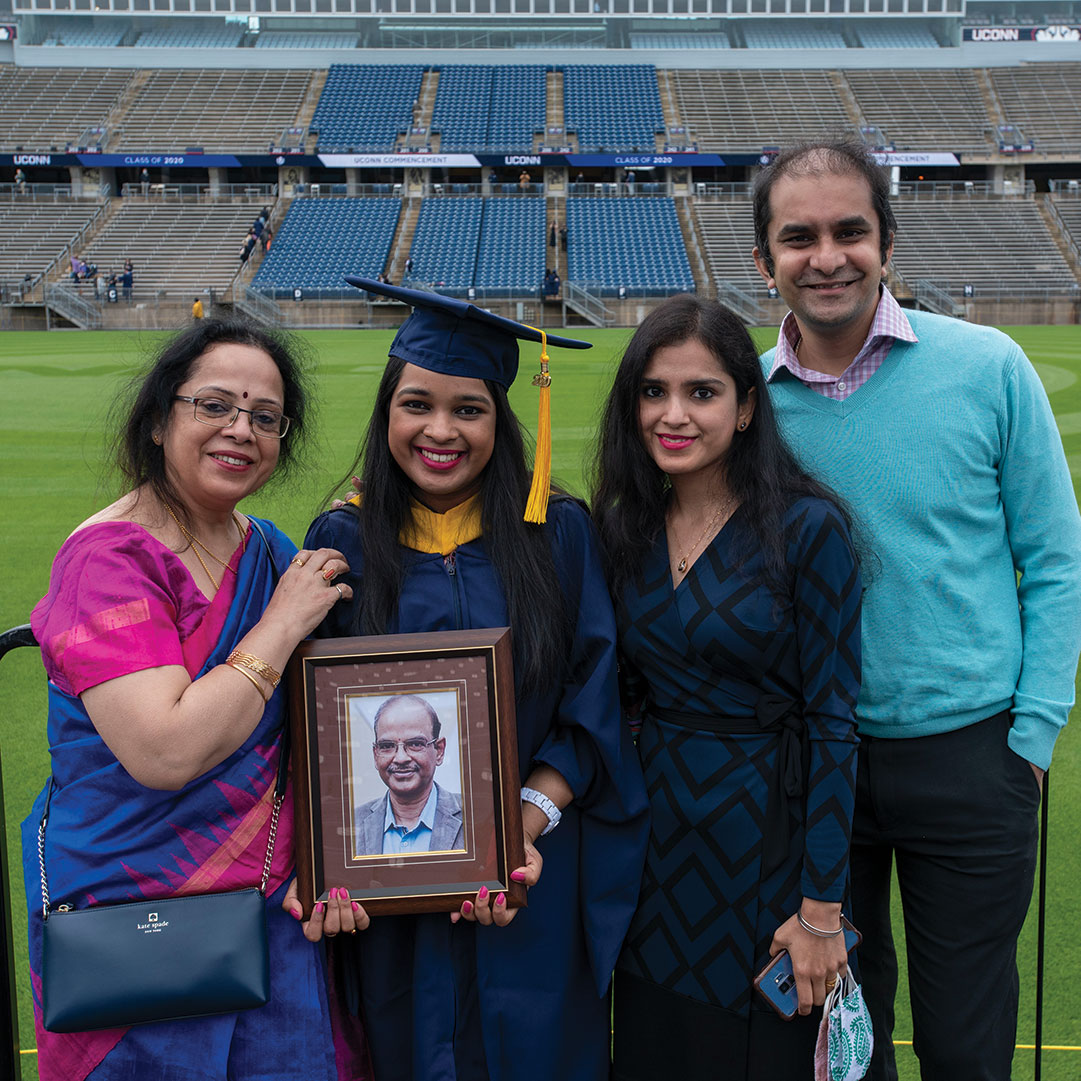 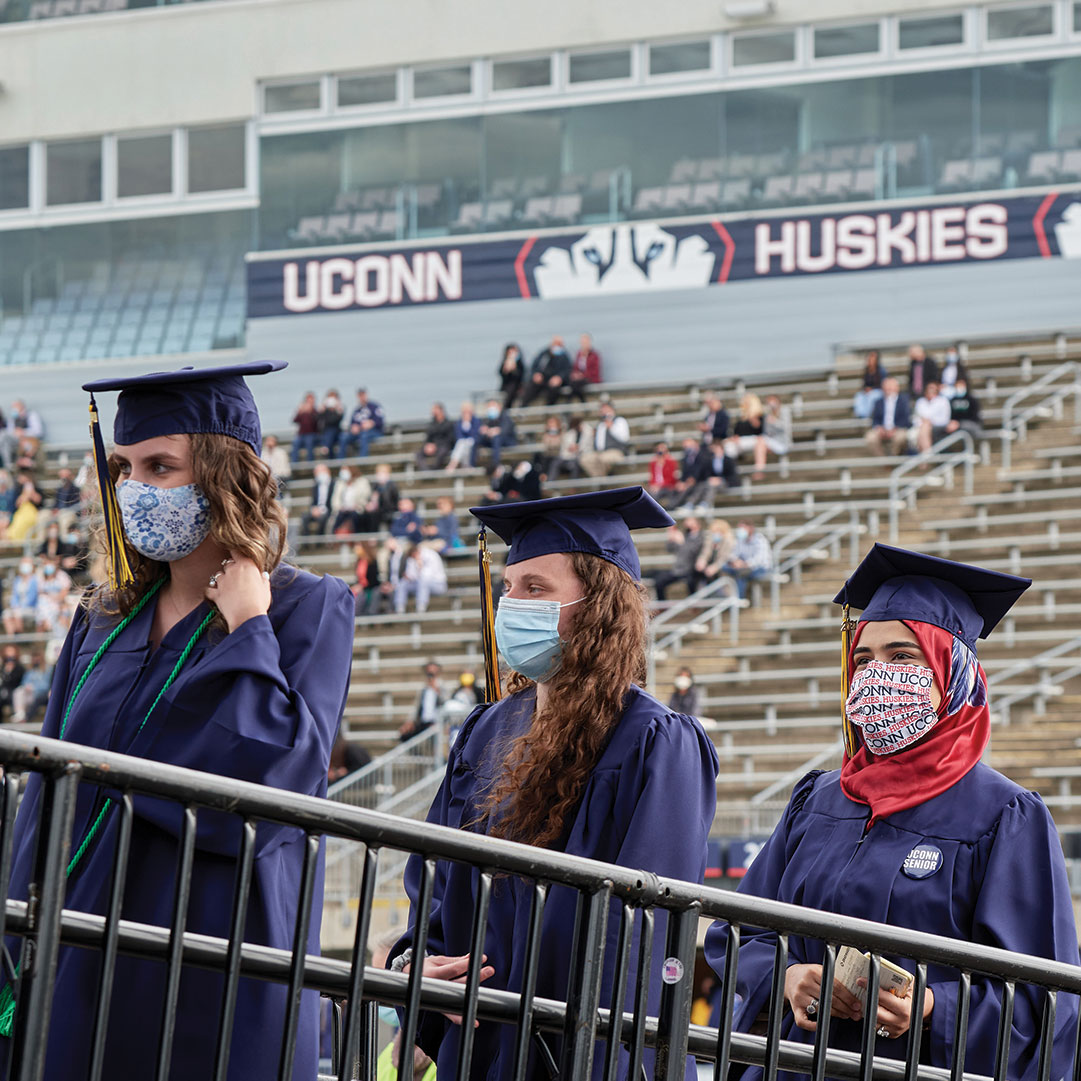 CLAS grads get ready to take the stage 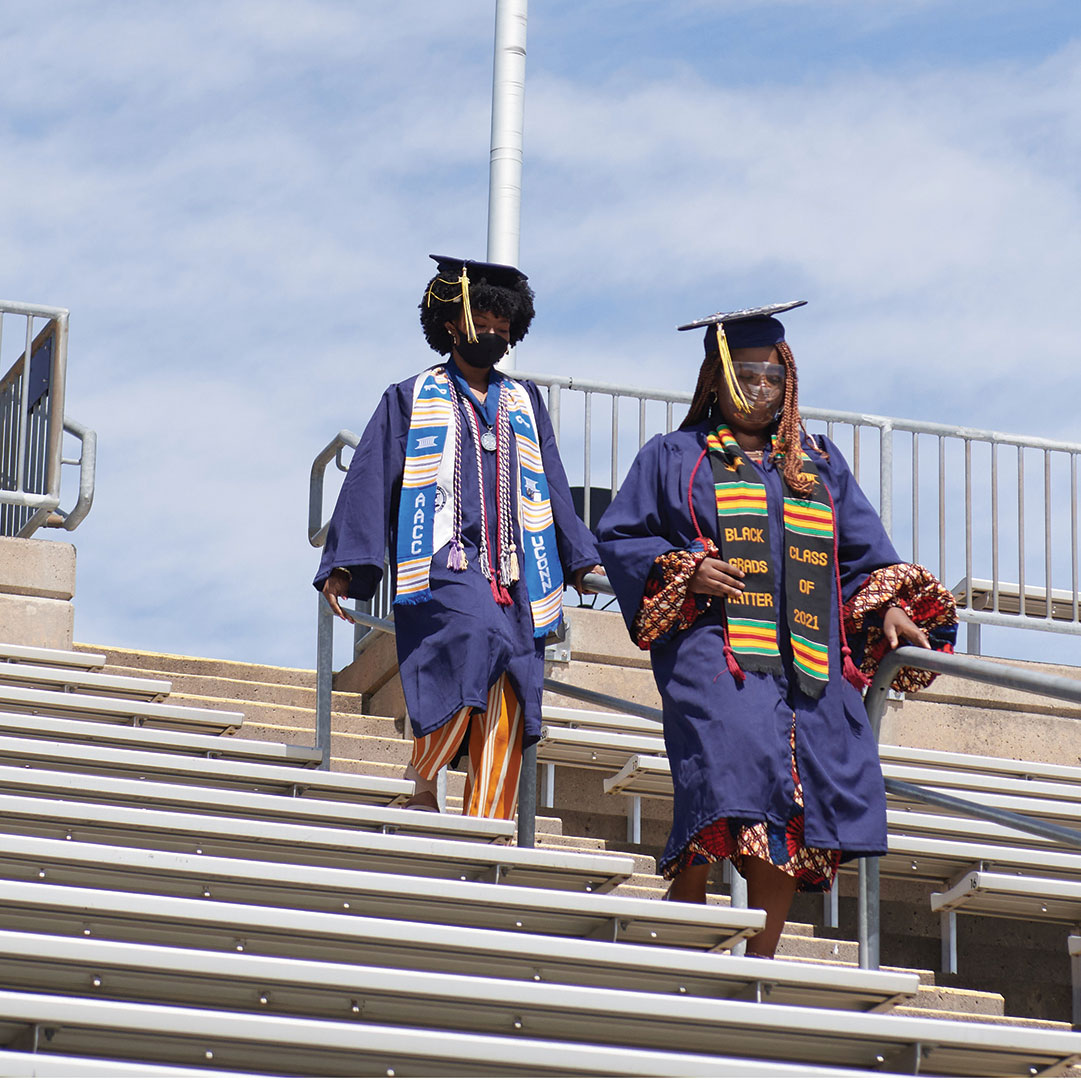 CLAS grads head down the bleachers 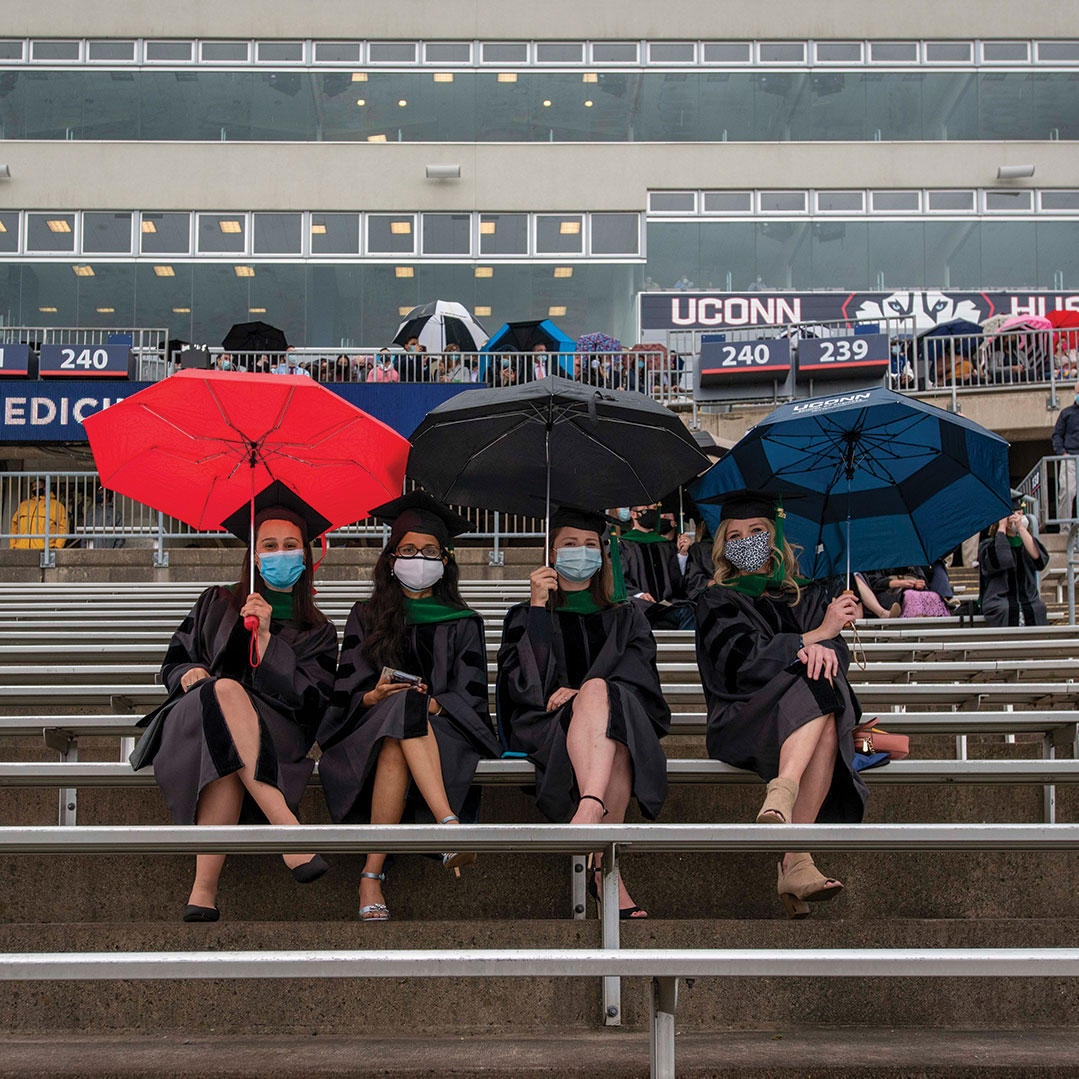 School of Medicine students had a rainy day 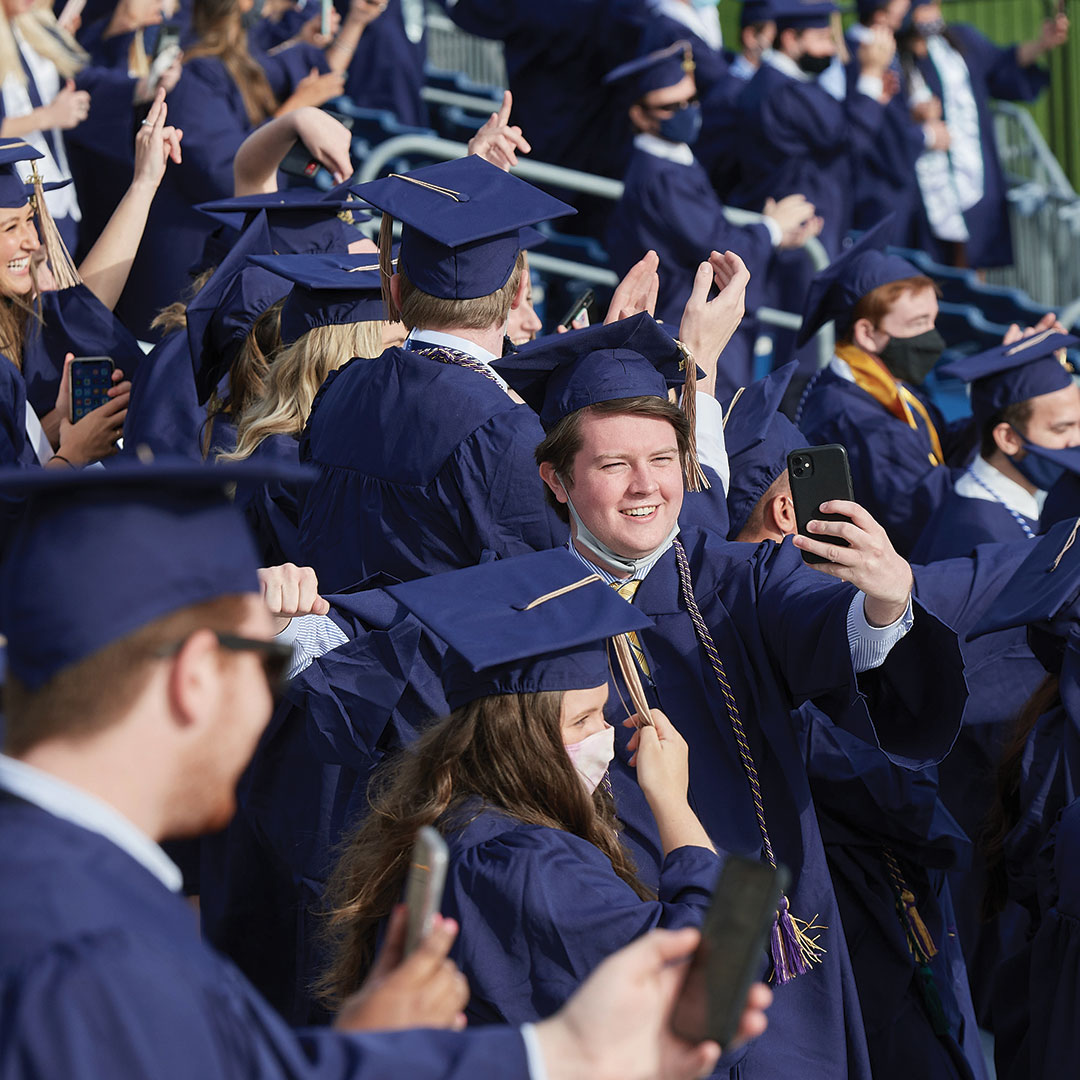 The Schools of Business, Education, and Social Work gathered Tuesday 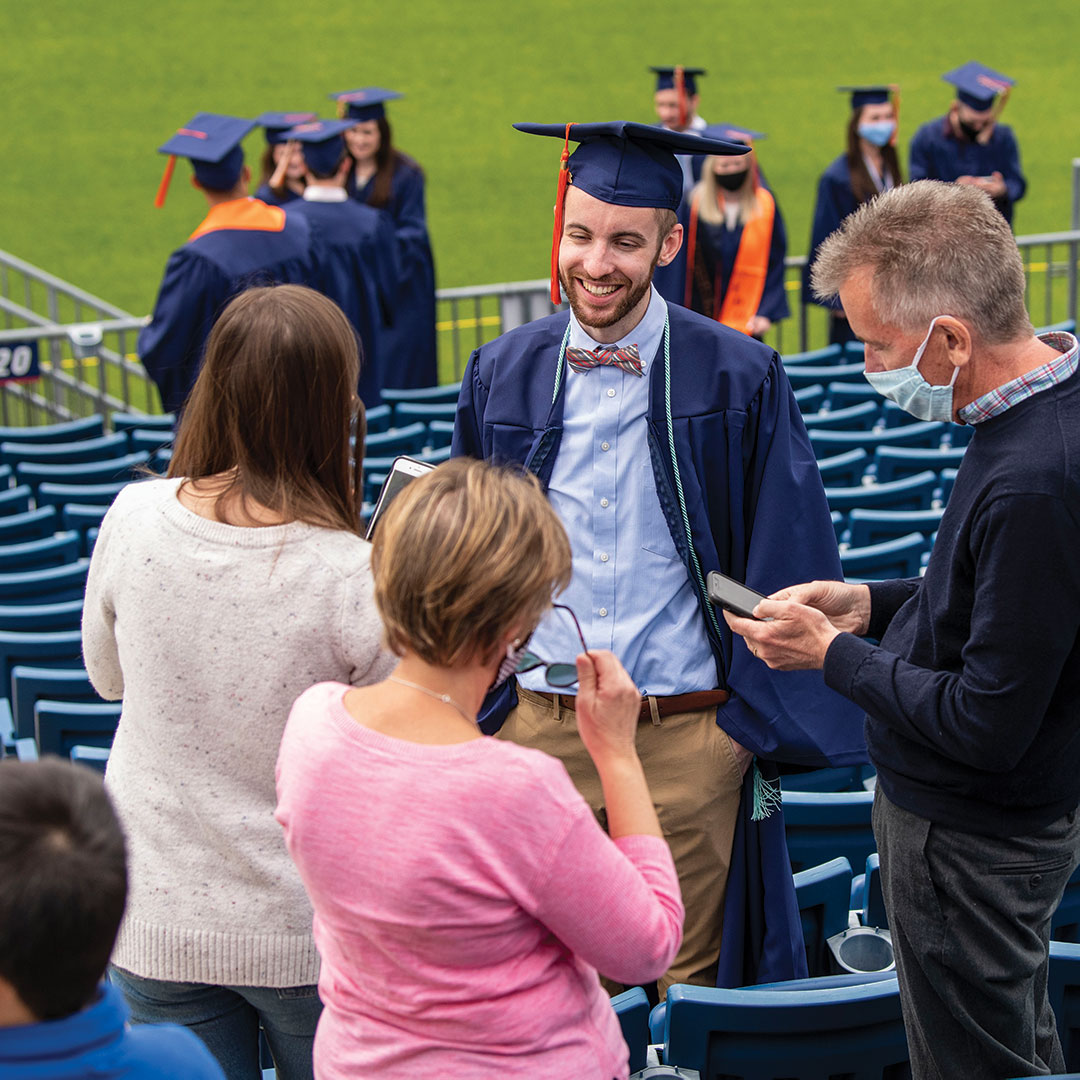 An engineering grad at Saturday’s 2020 ceremony 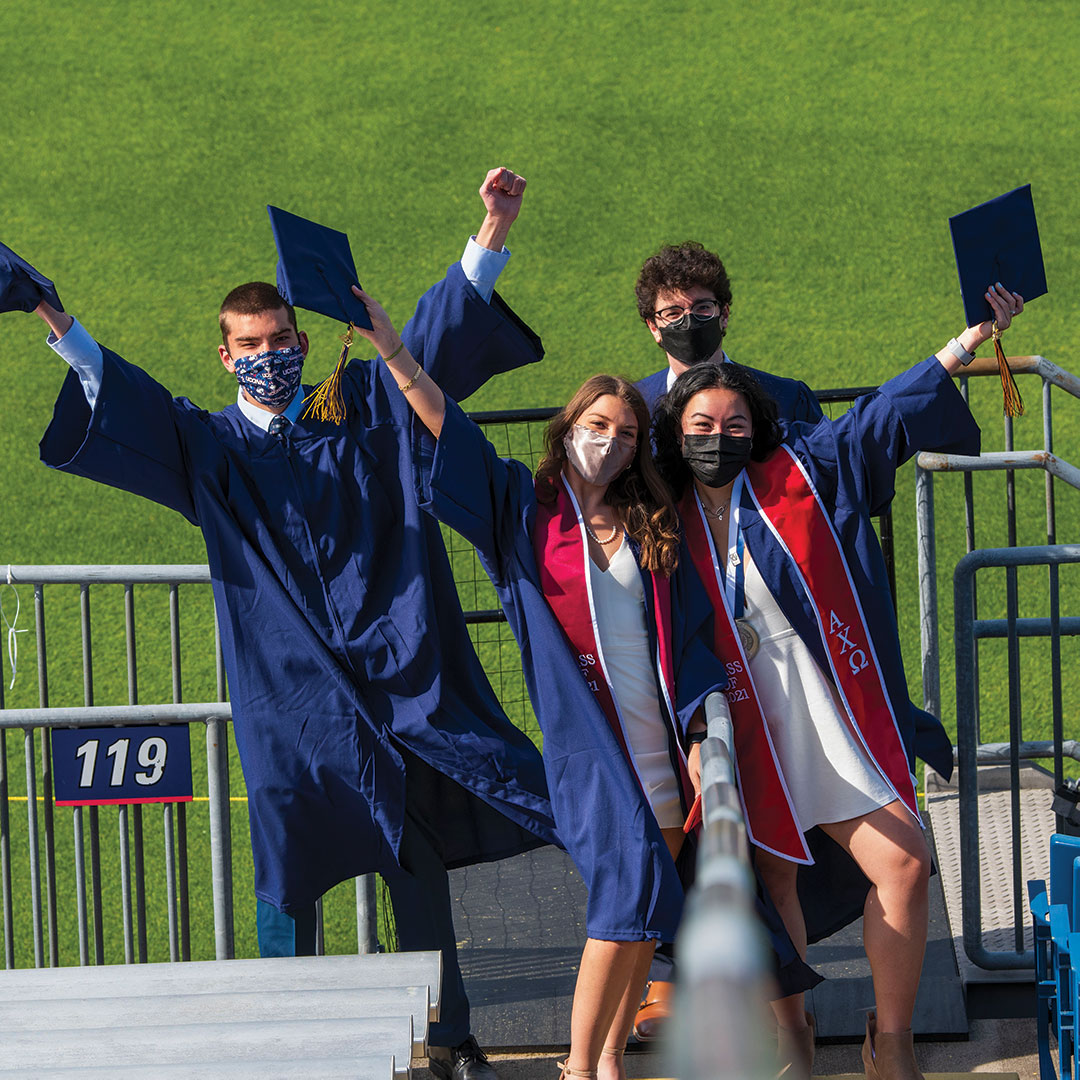 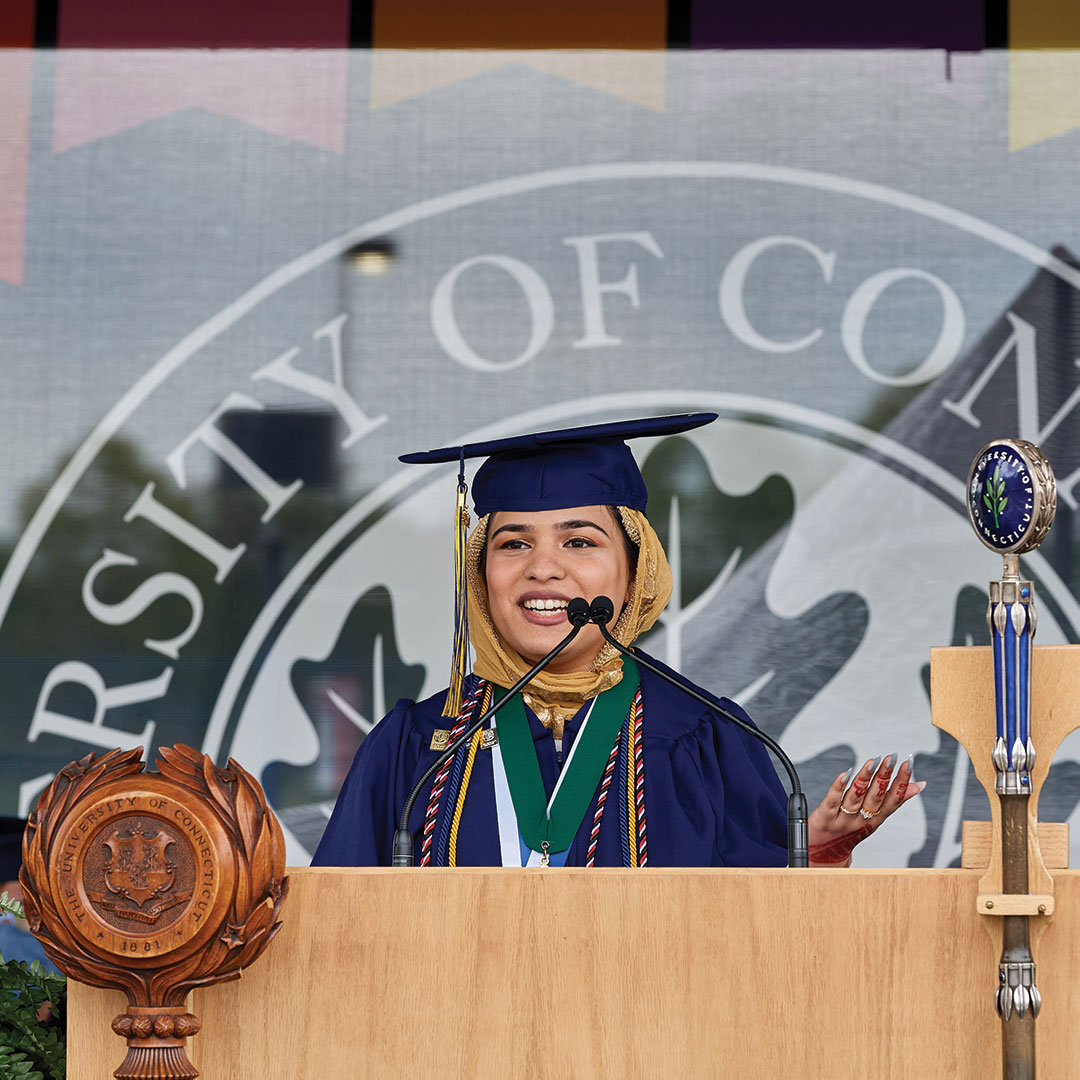 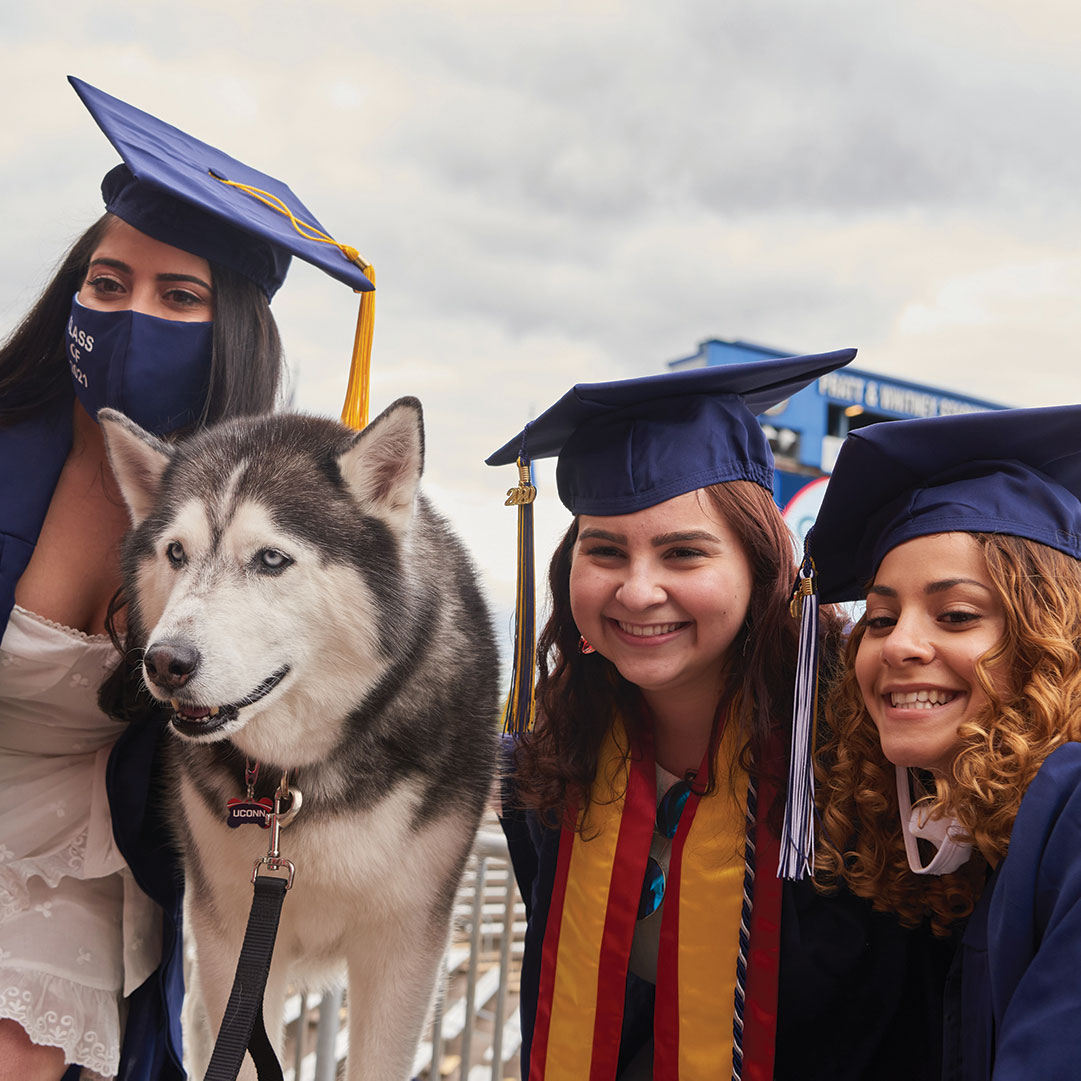 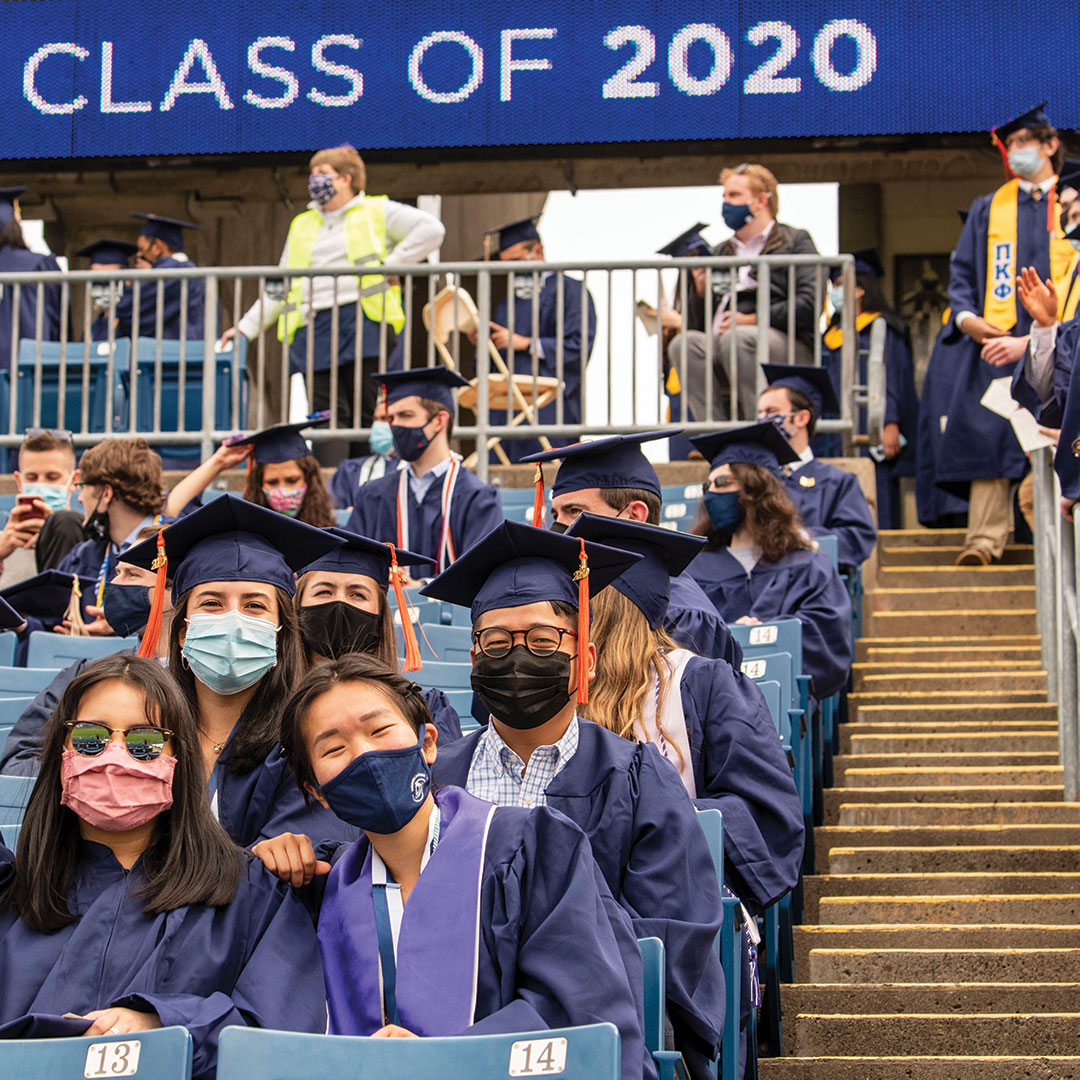 During his commencement address, four-degree alum Cardona shared with students one of his own favorite UConn graduation memories, about getting the doctorate that was such a huge milestone for him and his family:

“Picture this — in 2012 my uncle drove school buses. So I gathered about 20-30 family members, and I was driven to my doctoral graduation in a yellow school bus full of Puerto Ricans celebrating and singing. We had a loud speaker in it and it became a party bus. Instead of the Partridge Family playing folk music, it was the Cardona Family playing salsa. But I wouldn’t have had it any other way, and I couldn’t be more proud. My family means everything to me.”

As Cardona gave the 2021 UConn commencement address, his own son, a rising senior in high school, stood nearby. “That was really special to have my son there,” says Cardona. “UConn has done as much for my children as it has for me.” 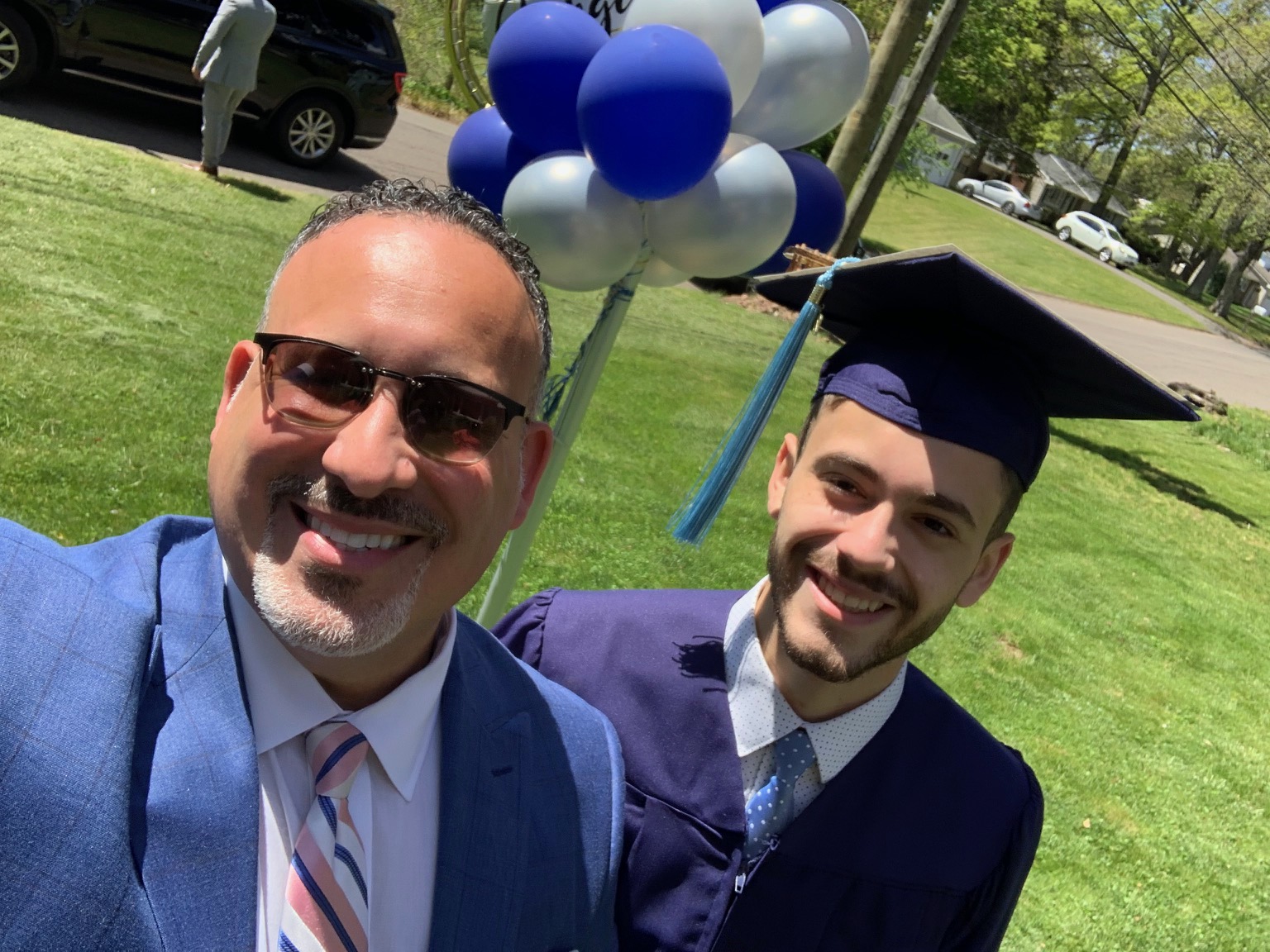 Secretary Cardona with his son, Miguel Jr. (bottom), and with his godson, Hector Cardona III (top). 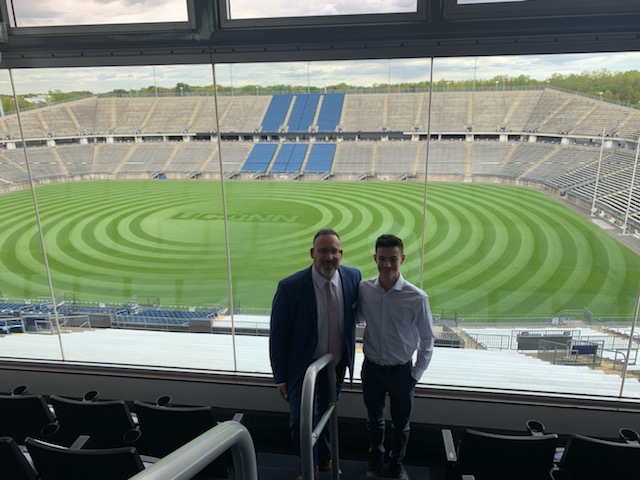 A couple days later Cardona stole some time to snap a photo with his godson, Hector Cardona III, who was about to receive a bachelor’s degree during the Neag School of Education ceremony. “Being commencement speaker knowing that my godson is in the audience is a blessing,” said Cardona.

The morning of Hector Cardona’s ceremony brought another blessing, as the U.S. Department of Education announced 36 billion in funding for higher education as part of the American Rescue Plan. “Half of that needs to go to student assistance,” Cardona told UConn Magazine that day. “That’s a direct impact on students’ ability to be successful. So students who might have been impacted significantly by the pandemic don’t need to drop out. They can get the financial assistance to pay for books, to pay for college expenses, to get extra tutoring. 50% of those funds are intended for them, particularly for those students that suffered the most during the pandemic, maybe suffered the loss of family members, loss of jobs, or just the academic disruptions. The funds are there now for them to get additional support at UConn and other universities, to get them back on track so they can finish their degrees.

“I’m speaking on campus one day and then a couple days later these funds are released. Knowing that students like the students I spoke to that day are going to benefit from some of those policies, from those resources. That’s really humbling and inspiring that I have the opportunity to be in that position.”

Capping off commencement — some of our favorite bedazzlings 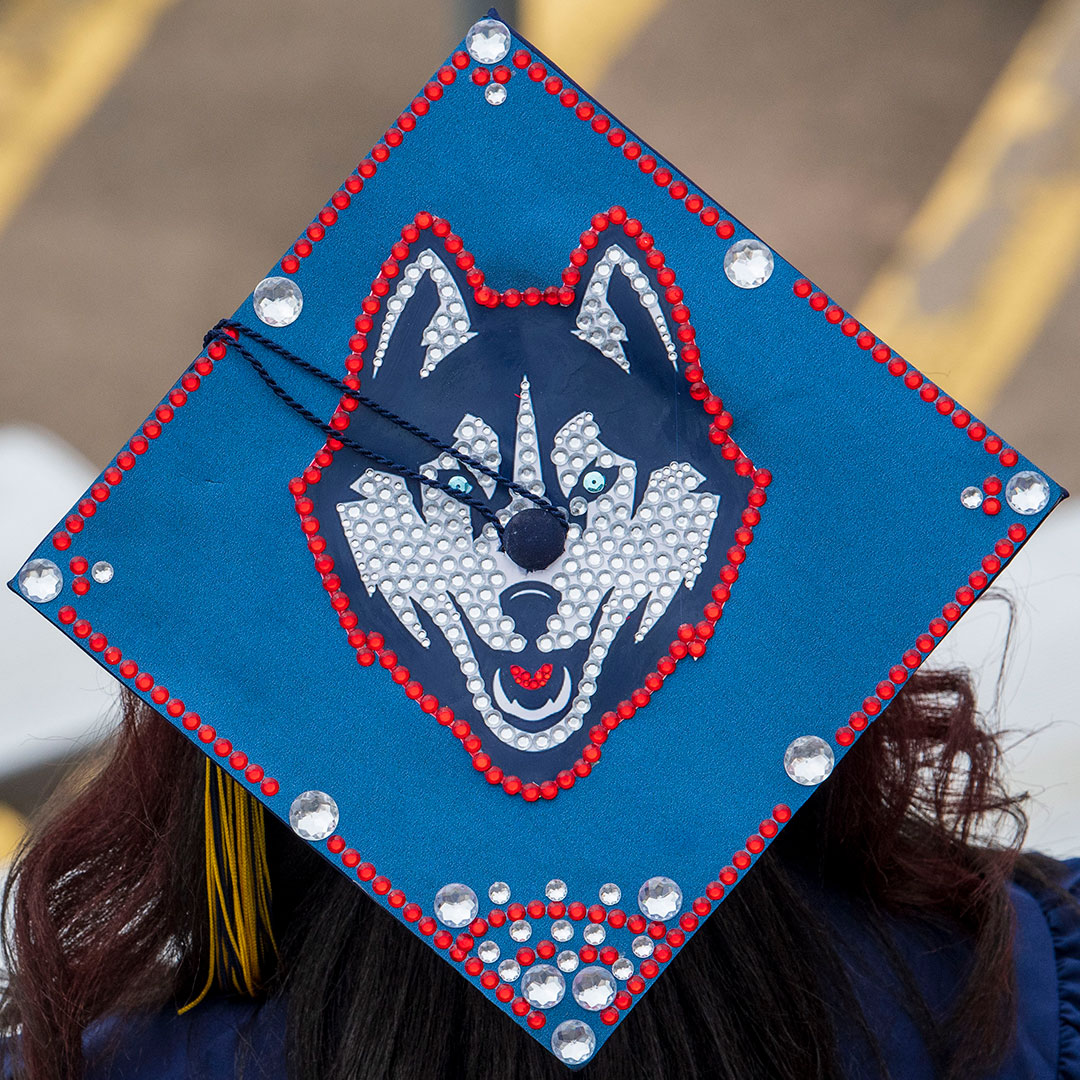 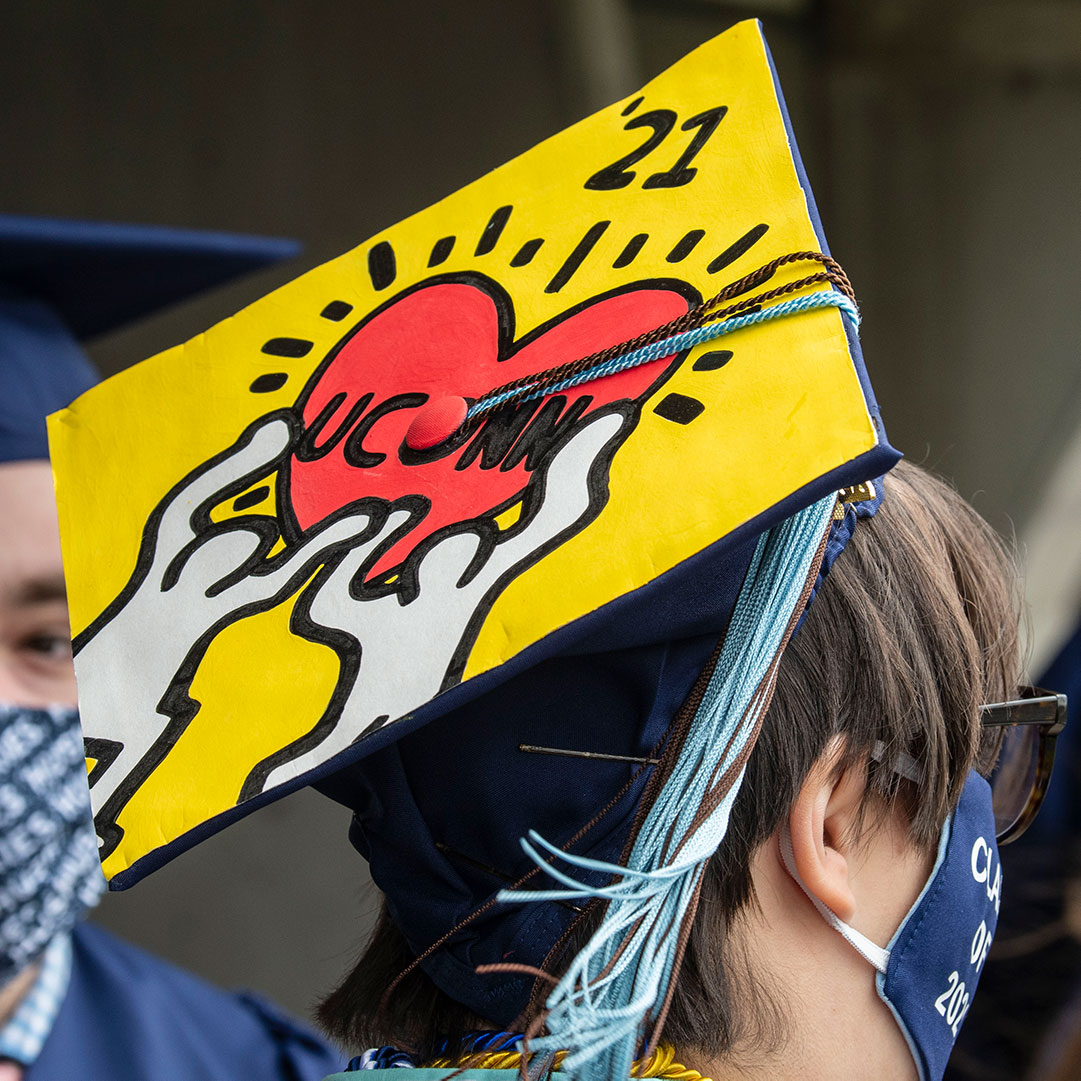 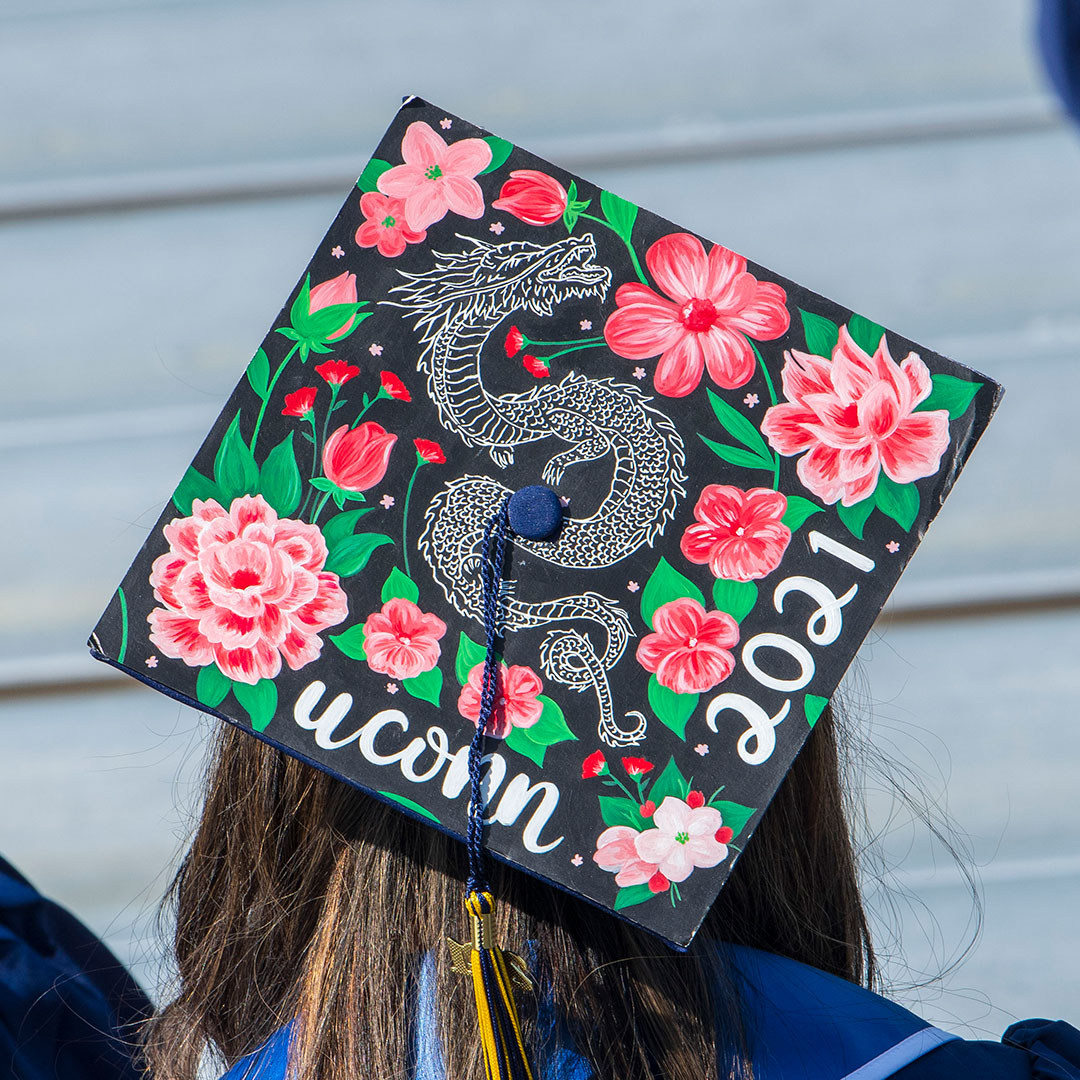 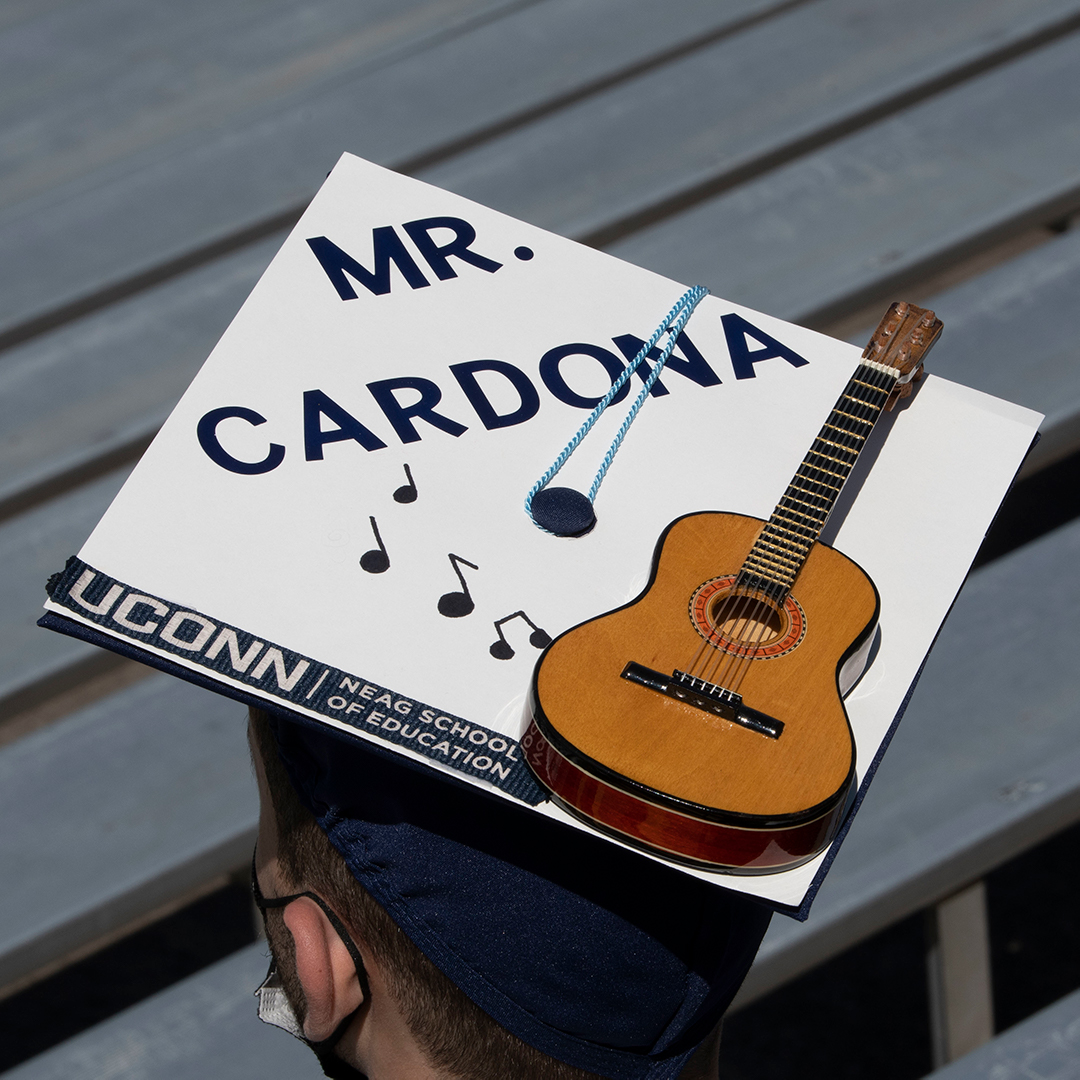 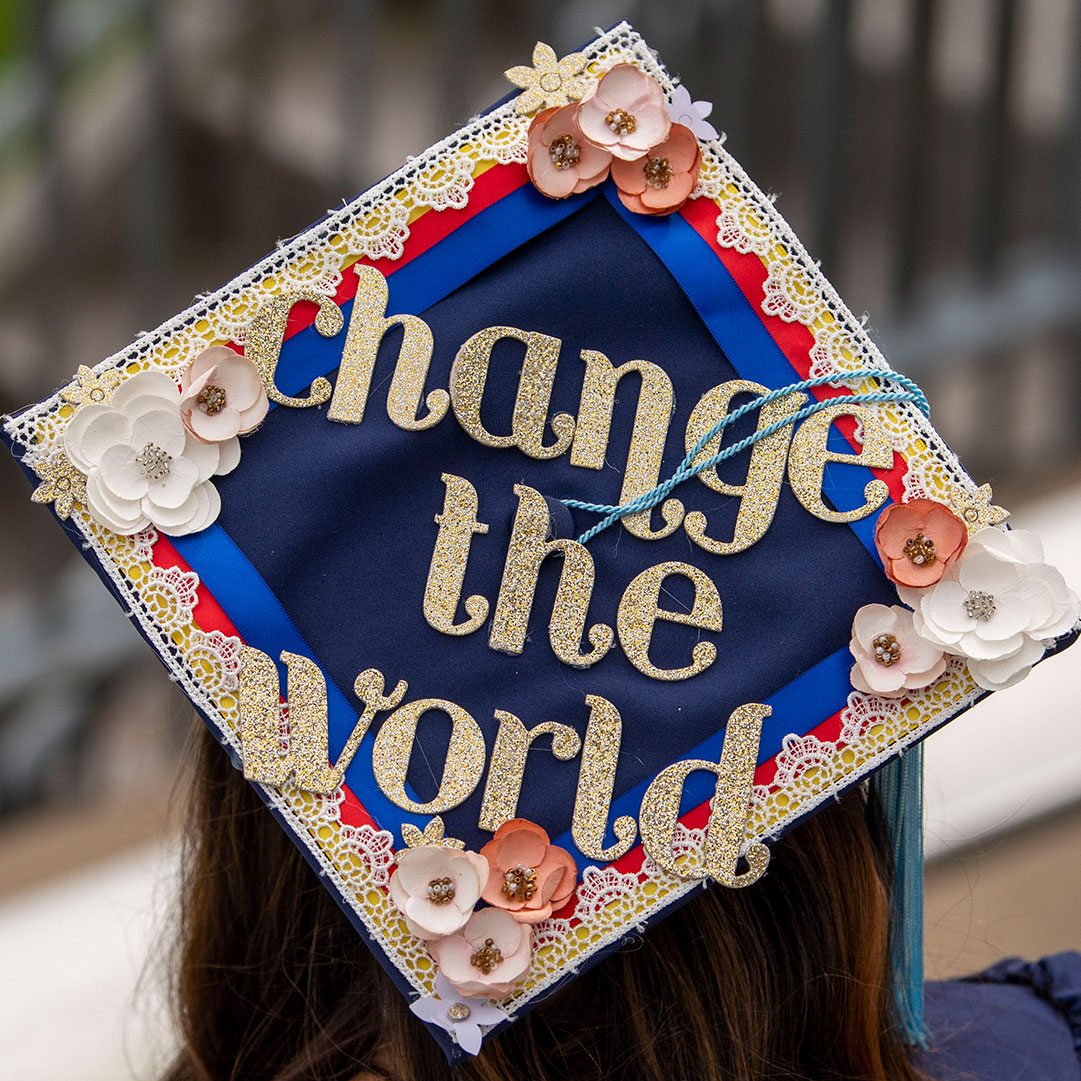 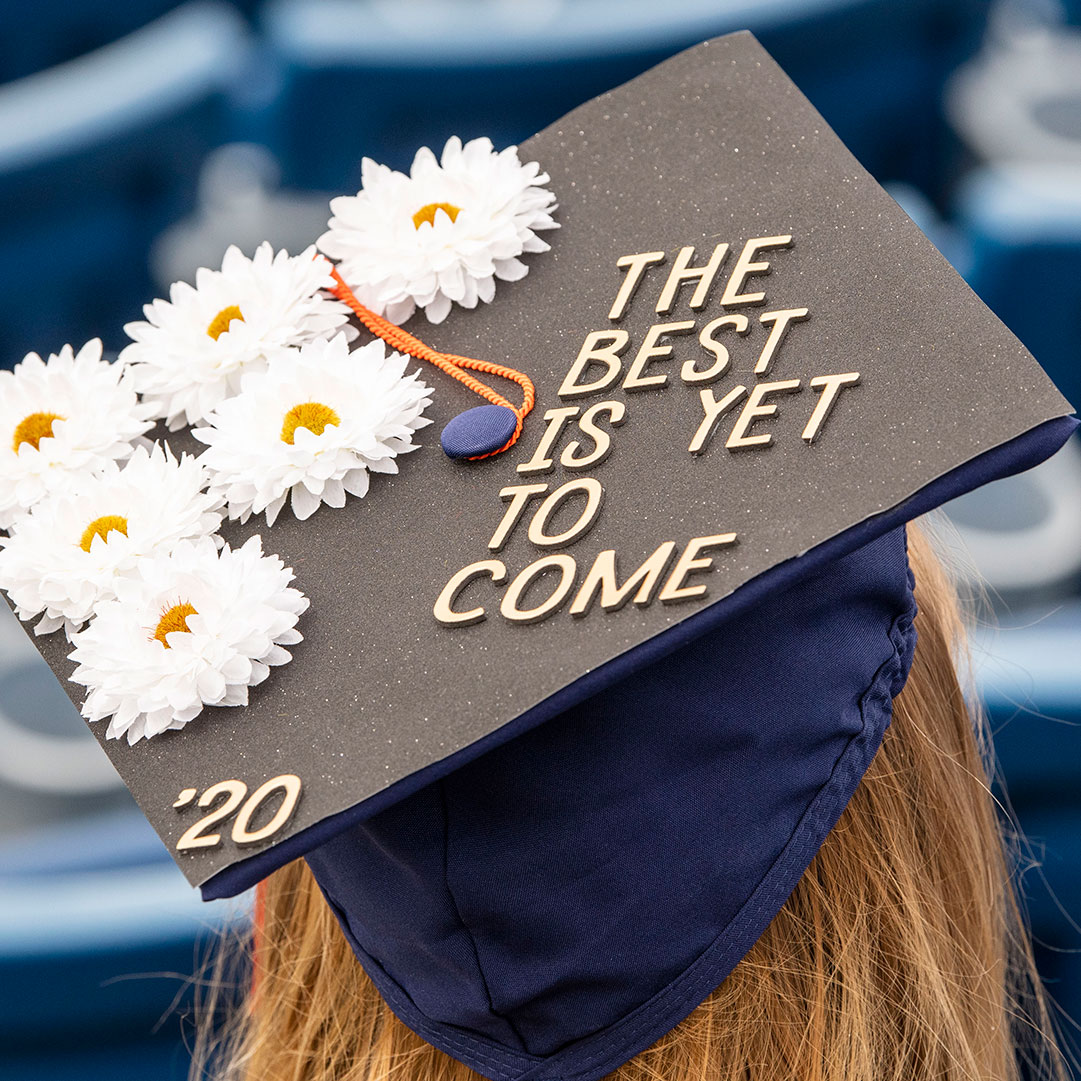 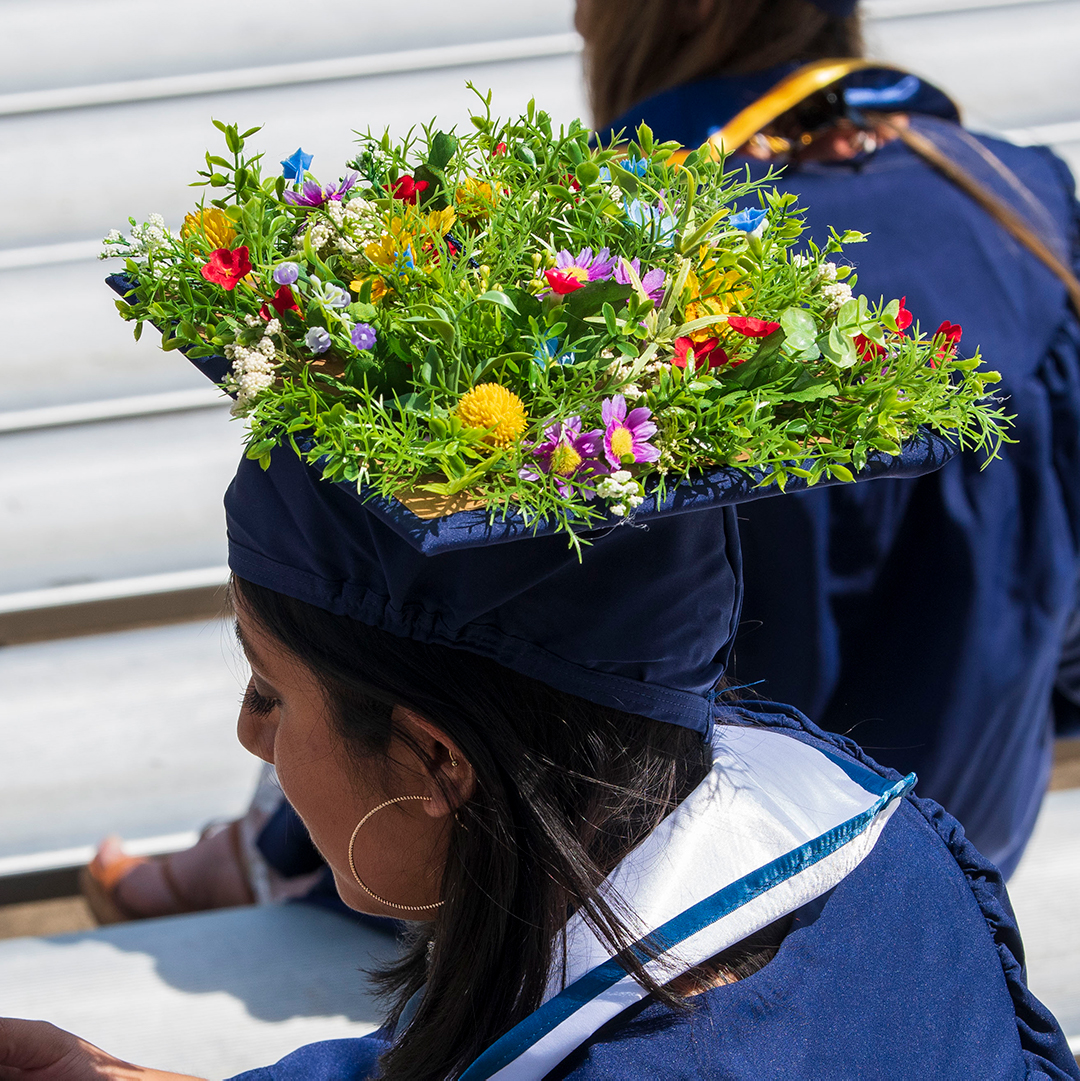 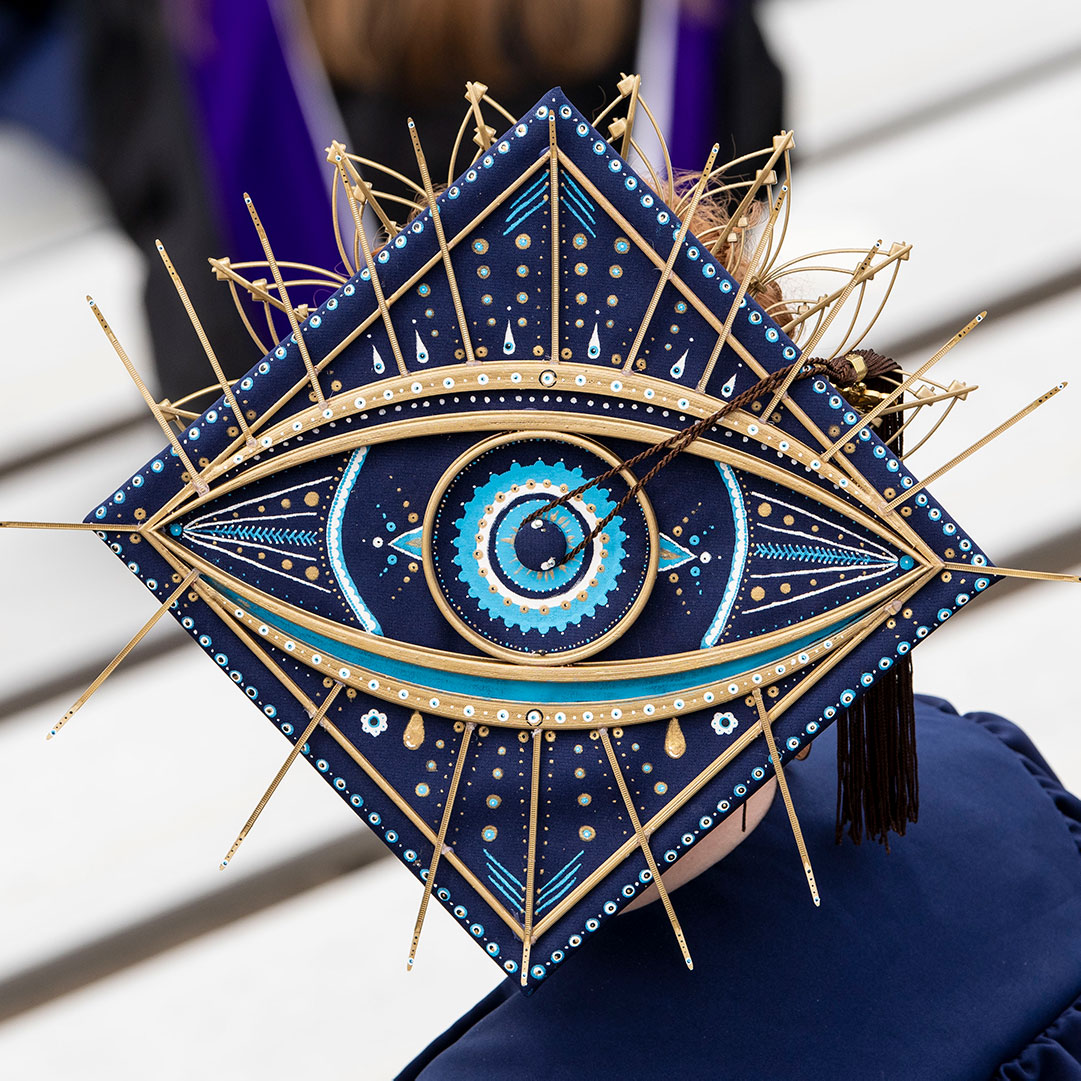 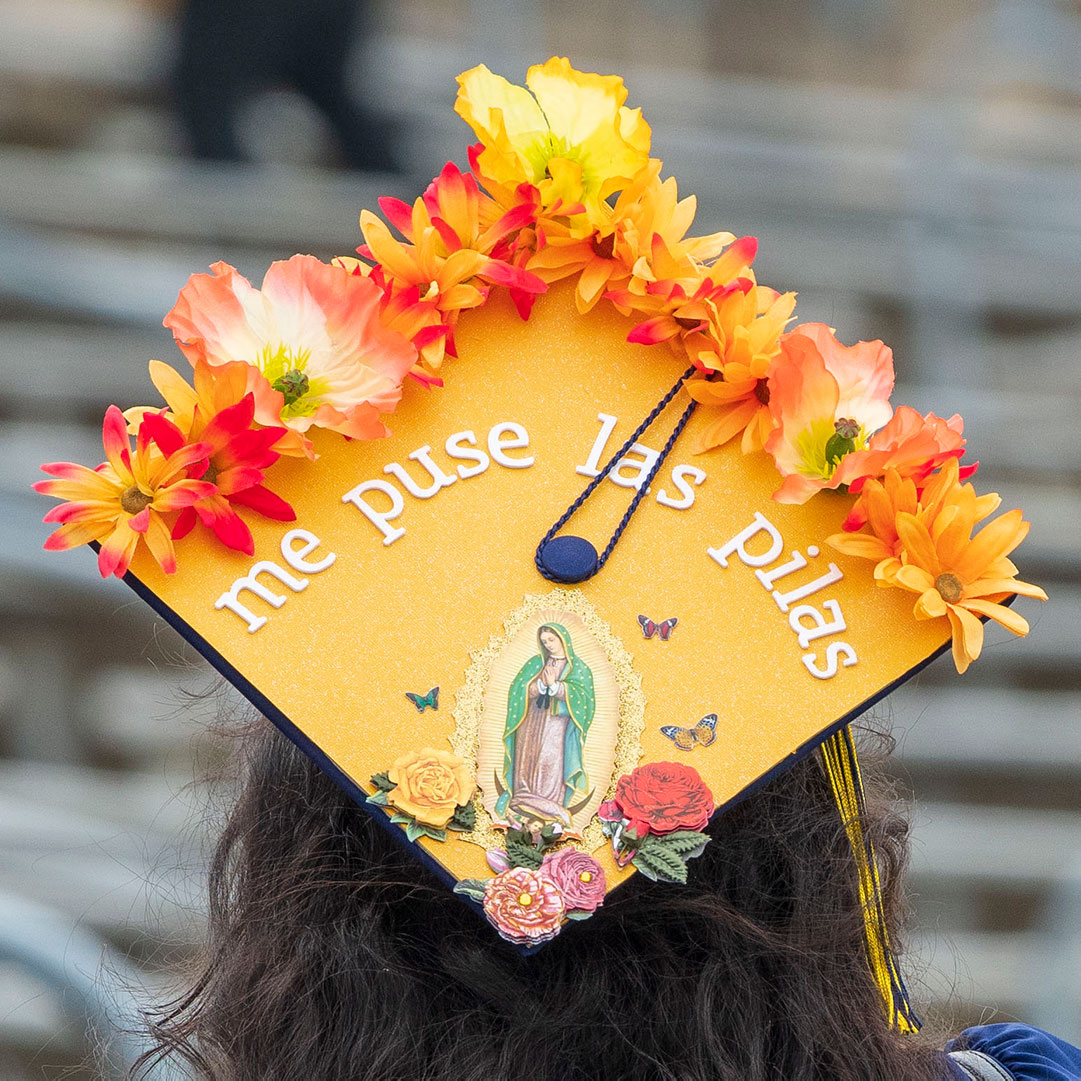