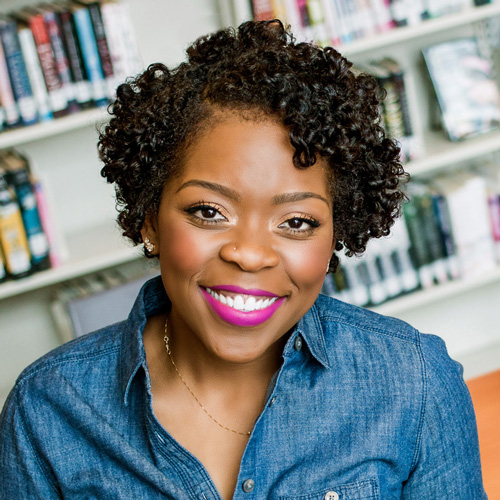 How communications professor Shardé Davis’ tweets turned into a movement for Black people in academia.

Imagine sitting on your couch on a Saturday night, watching the country react to another murder of an unarmed Black man. Your body is tense, your throat is dry as your eyes well up with tears and you begin to feel that familiar anger, sadness, helplessness. You turn to Twitter to share your feelings, bookending your tweets with a hashtag you create, and head to bed. When you wake up, you’ve gone viral.

“I was certainly outraged by the strangulation of George Floyd, but I was also outraged by the murders of our Black trans brothers and sisters and Black women like Breonna Taylor, who were also slain by law enforcement,” says assistant professor of communications Shardé Davis recalling that night. “I was reeling and thinking, what can I do?”

Davis knew whatever she did needed to have impact and be personal to show that racism is an ever-present reality for Black people in America. So she wrote about experiences she’d had with racism while in graduate school using #BlackintheIvory, a play on words that encapsulates her race, her research, and her position in predominately white academia. She texted her friend and fellow Blackademic Joy Melody Woods for guidance. Woods liked the hashtag so much, she tweeted it immediately. Davis did the same. Within 24 hours, #BlackintheIvory was trending nationwide on Twitter.

“What an emotional yet powerful day,” tweeted Davis that Sunday. “I think I’ve read every single tweet. Thanks to everyone for sharing what it’s like to be #BlackintheIvory. We’ve opened the floodgates, so more may cont. to pour out as the days pass. Pls know that we will continue to hold space for you.”

One week later, a New York Times article said, “Sensing a rare, and perhaps fleeting, opportunity to be heard, many Black Americans are sharing painful stories on social media about racism and mistreatment in the workplace, accounts that some said they were too scared to disclose before. They are using hashtags like BlackInTheIvory or WeSeeYouWAT, referring to bias in academia and ‘White American Theater.’”

Although creating a viral hashtag has landed her a lot of media attention and opened the door for conversations about racism at institutions across the country, Davis has always been involved in equity, inclusion, and connecting work. In UConn’s College of Liberal Arts and Sciences, Davis’ research centers around Black women and how they communicate and connect with one another. She worked with former faculty Daisy Reyes and current faculty David Embrick and Milagros Castillo-Montoya to create town halls for faculty and staff of color.

Those spaces serve as opportunities for communities of color working at UConn to connect, relate, and support one another. The night she decided to share her experience as a Black woman in academia, she was hoping to foster a similar community, but virtually, during a time when many aren’t experiencing in-person connections due to the global pandemic.

“As Blackademics, we’ve been, in some senses, bullied by the institution. Many of us have to place a muzzle over our mouths, put our heads down, and work tirelessly if we want to get tenure or enter the ranks of upper administration. For the most part, reaching those milestones requires that we ‘go along to get along,’” she explains. “We’ve never had a space or opportunity to be seen or heard, especially on such a large, national platform.”

On Twitter, the hashtag is filled with stories of professors being mistaken for students and examples of white peers not believing stories of racism Black professionals experience on campus. “[The hashtag] has created a space for many white folks to say to themselves ‘Oh, that’s not a just UConn-specific issue’ or ‘Oh, that’s not a Shardé-related problem,’” she says. “They are reading, quite literally, the exact same stories by Blackademics from different age groups, institutions, regions, fields, and even career points. It’s not a coincidence that these issues are happening over and over again across the United States. Because that’s how systemic racism works. It eats its way through social institutions and rears its ugly head in similar ways. It’s a creature of habit. There is no way to turn a blind eye to it.”

Davis plans to keep the conversation going in a few ways. She and her colleagues at UConn are continuing conversations that began in town halls and talking with leadership about how the institution can be more inclusive. The Black Graduate Support Project is reopening; it lists names and payment info for Black graduate students in need of financial support, and anyone can identify a person and send them money directly. Davis also plans to relaunch the website to highlight various resources that will equip Blackademics to get more institutional resources at their respective universities. Lastly, keep an eye out for #BlackintheIvory, the book.

Find out about UConn's U.S. Anti-Black Racism course at https://today.uconn.edu/2020/09/new-course-introduces-students-us-anti-black-racism/