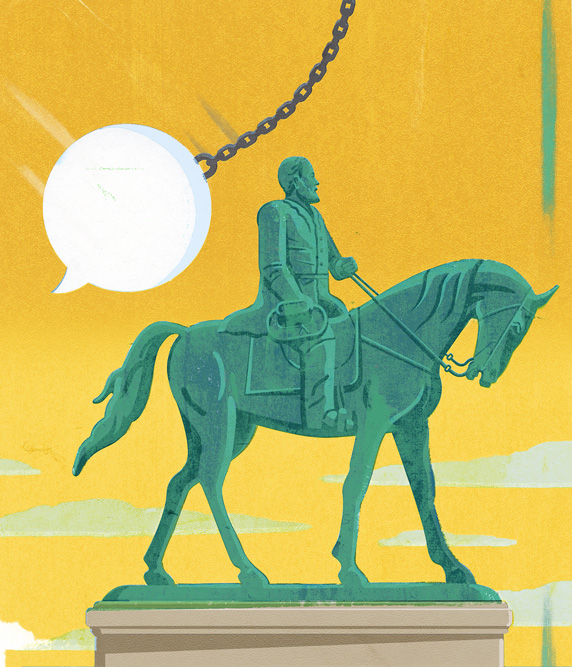 An Indian American who is one of the world’s leading experts on the Civil War and slavery in the U.S., history professor Manisha Sinha has been one of the most sought after voices in the recurring and recent debate over removing Confederate statues. She told us why she believes we should take them down.

As a Civil War historian, it seems that I have been fighting against the myth of the Lost Cause throughout my career. The notion that the Confederates fought for states’ rights and honor rather than for slavery and that the Confederacy lost the war merely because of the superior numbers of the Union is ubiquitous, especially in the South. Historians have long contested these entrenched falsehoods by pointing out that the southern states that seceded from the Union in 1860–61 mentioned the perpetuation of slavery specifically in their Ordinances of Secession. The Confederacy fought, as Union General Ulysses S. Grant put it, for one of the worst causes in human history. I am against the indiscriminate taking down of all statues, including those of slaveholding Founding Fathers. But Confederate statues deserve to be taken down.

In 1991, I spent a year in South Carolina researching my first book on the politics of slavery and secession in that state. It bothered me that the Confederate flag flew on state grounds in Columbia and I wrote a letter to the campus newspaper of the University of South Carolina criticizing that. I got a lot of blowback for that letter. In Charleston the statue of the proslavery theorist and Southern nationalist, John C. Calhoun, on an 80-foot pedestal, offended me too. I had read every word that Calhoun had written and knew that he was an unapologetic defender of slavery and white supremacy, even at the cost of wrecking the American republic. Thanks to the movement for Black lives this year, that monstrosity, which had been regularly defaced by the local black population, was finally removed.

Most Civil War historians used to take a catholic position on the removal of Confederate statues. They asked for contextualization or other statues erected with them. Not me. I always thought that Confederate statues were a travesty, erected as paeans to white supremacy after the fall of Reconstruction at the turn of the 19th century, well after the Civil War. They not only commemorated men who fought for slavery and committed treason against the United States, but they also marked the triumph of Jim Crow and a regime of racial terror in the postwar South. African Americans have protested the erection of these statues from the start.

The NAACP initiated a boycott of South Carolina for flying the Confederate battle flag. In 2015, it finally came down after the massacre at the Charleston AME church. A year later, at the very first Draper workshop series, which I began at UConn, I argued strongly for the taking down of all Confederate statues to the consternation of some of my colleagues. In 2017, the neo-Nazi march at Charlottesville that resulted in the murder of Heather Heyer brought the controversy over Confederate statues into the spotlight once again. And suddenly the tide turned, with Confederate statues being taken down in New Orleans and Baltimore, among other places.

But it has been only recently that protestors and city councils have started dismantling these monuments to hate all over the country, including Richmond’s Monument Avenue Confederate statues, after the murder of George Floyd. I would love to see the Confederate frieze that desecrated Stone Mountain in Georgia and serves as a gathering space for the Ku Klux Klan and white supremacists removed. In fact, this frieze was completed and many Confederate statues and flags were put up in the South as symbols of “massive resistance” to the civil rights movement in the 20th century.

As a historian, I have never thought that taking down statues is erasing history. Statues are not history; they are the crudest ways of doing public history. Our tax dollars maintain these statues, and we should certainly not honor men who committed treason in the name of human bondage or those who upheld white supremacy. Again, this does not mean we should remove all statues such as those of slaveholding Founding Fathers. These can be easily contextualized; we don’t need to whitewash their histories but present them in all their complexity. In fact, it has been opponents of taking down Confederate statues who have argued that this would lead us down a slippery slope where all statues would be taken down. It is important to differentiate between Confederate statues that have no redeeming qualities to them and others of flawed men who did.