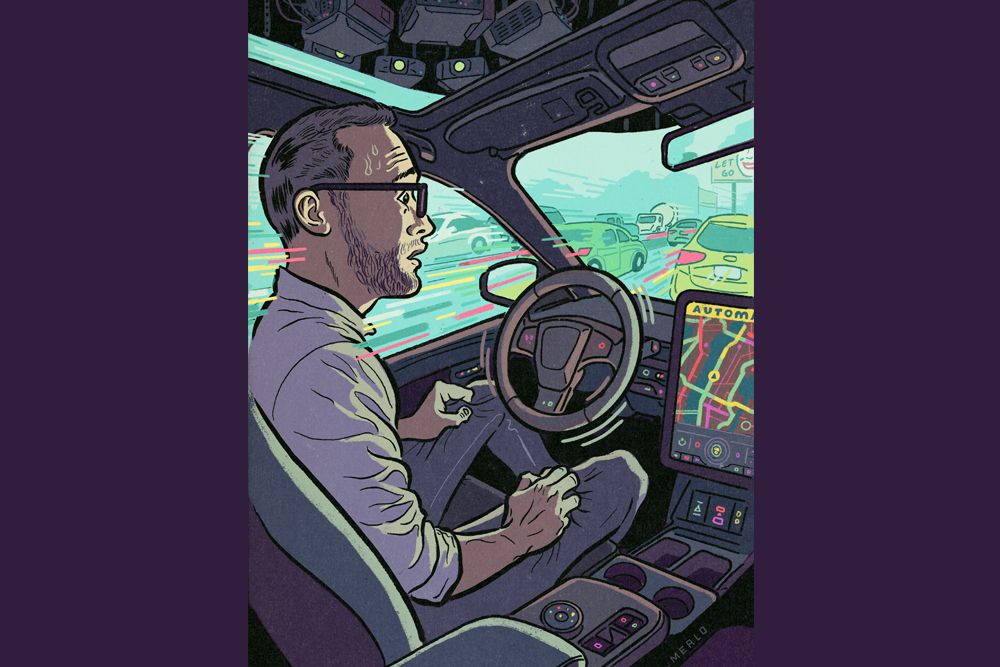 In the Driver's Seat

hecking my side and rearview mirrors, adjusting my seat belt, and
scanning the environment around me, I peer into the road, ready for
the drive ahead. Below me are the standard accelerator and brake pedals, and beside me is the shifter. Outside the car is darkness, with a wisp of chilliness in the air that causes my teeth to chatter.

Seated next to me in the passenger seat is Eric Jackson ’04 MA, ’08 Ph.D., tall and skinny and describing to me, in his calm, assured voice, the various parts and features of the car that are unfamiliar to me. When Jackson steps out of the car and I’m left alone, with other cars speeding by me and the city bustling around me, my nervousness heightens.

Seated next to me in the passenger seat is Eric Jackson ’04 MA, ’08 Ph.D., tall and skinny and describing to me, in his calm, assured voice, the various parts and features of the car that are unfamiliar to me. When Jackson steps out of the car and I’m left alone, with other cars speeding by me and the city bustling around me, my nervousness heightens.

Normally, I wouldn’t be so nervous driving in a new car, but there’s something different about this Ford Focus. For starters, it is inside a building — the cityscape I see is projected on a wall. And if I were to pop the hood there would be an empty space where the engine used to be.

As Jackson exits the car and starts to walk away, I ask him why we don’t have these cars on the road yet. He says that while the autonomous technology is pretty advanced, the unanswered societal questions surrounding the technology are causing a major roadblock.

“The legal system needs to change and adjust,” explains Jackson. “Will I need a driver’s license in the future? If the car is driving itself, can I drink and drive? If the technology malfunctions and kills someone, who’s liable or responsible? Do I even need insurance anymore?”

As those answers swirl around in my head, Jackson jumps into the back room, where a computer and a bank of screens are programmed to control the weather conditions projected on the screens in front of me and, importantly, to take over control of the acceleration, braking, and steering of the car.

As the car lurches forward without me touching anything, and the steering wheel starts to veer, I stare in awe as the cityscape starts to blur outside my windows.

“The car lurches forward without me touching anything, and the steering wheel starts to veer...”

The Long and Winding Road Ahead

Jackson projects a long timeline for adoption of the technology I’m testing. For most of us, he says, it may be something that the next generation gets to use and experience. “A lot of predictions we’re seeing are saying it will be 50 years before we have highly automated vehicles on the roadway.”

Jackson isn’t alone in that assessment. In a 2019 Slate magazine interview, Chris Urmson, CEO of self-driving start-up Aurora and former engineering manager for Google’s self-driving car program, predicted that people would start to see autonomous vehicles cruising down the road in five to 10 years, but widespread adoption would be “30 to 50 years” away.

Why so long? One of the reasons, says Jackson, is the public’s lack of trust in the technology. A 2018 Intel study found that only 21% of U.S. consumers would swap their current car for a self-driving vehicle, although a whopping 63% feel that the technology will be the “norm” in the next 50 years.

Jackson cites frequent AAA surveys on trust in autonomous vehicles. “What you’ll see is that on one survey, 78% will say they do not trust a vehicle, and then it’ll start to go down. Then a crash will happen, and everything gets set back significantly.”

Indeed, in a March 2020 AAA poll 88% of drivers said they would not feel comfortable in a fully autonomous car, and 72% said they would feel safer only if they could take over the wheel if something went wrong.

Personally, I can’t blame them.

As I travel down the simulated road in the engineless Focus, I feel a ping of anxiety and dread. The car pulls up to a red light and my foot instinctively moves toward the brake pedal. When the light turns green, and the car turns right onto a new road, my hands tremble as I force them to stay in my lap.

“In the end, it all comes down to consumer tastes and demand. You can’t sell something that people just don’t want yet.”
—Eric Jackson, Connecticut Transportation Institute

I imagine what it would be like on a real road, with a real car, with real humans driving around me or crossing the street in front of me. What if the technology fails? Jackson acknowledges that pedestrian and passenger safety are one of the other bigger hurdles for lawmakers and insurance companies.

“States are largely left on their own to develop language in legislation, and we still, as a society, don’t know how far we need to go to keep people safe,” he says. “On the federal level, we have the National Highway Traffic Safety Administration, but it’s their job to police and monitor; they don’t have the authority to enact legislation.”

At that, Jackson turns off the autonomous driving mode and I bring the simulator to a full stop, ending my foray into the virtual driving experiment. 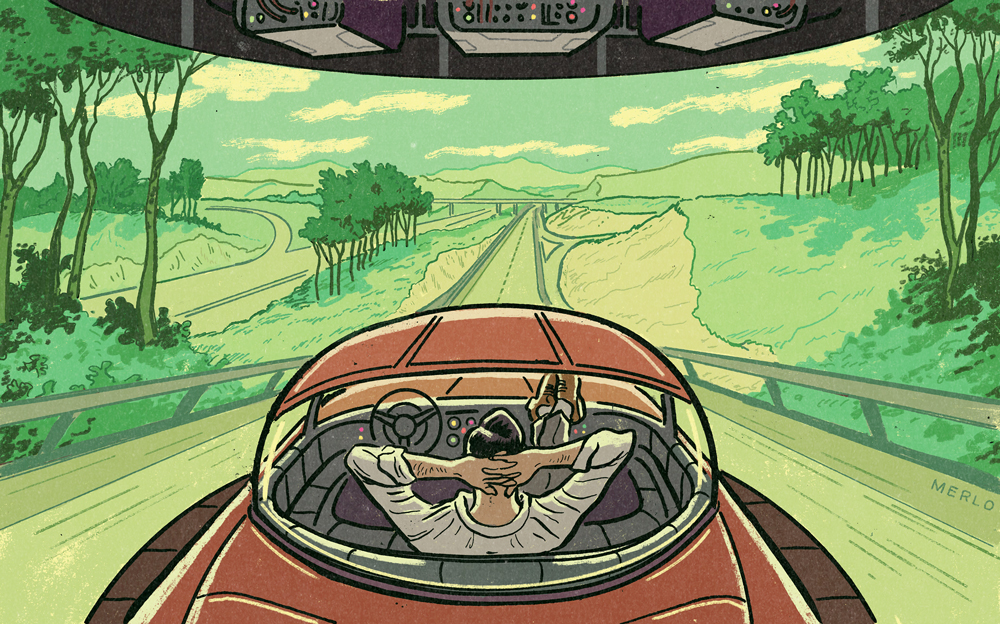 Waiting to Level Up

In parting words Jackson throws out a glimmer of hope, clarifying just how far along the automated technology is.

When researchers speak about autonomy and cars, there are six levels of increasing complexity. According to the NHTSA, they are defined as zero, with nothing computerized (think of a classic or vintage car), to five, which is all computer, with no driver intervention.

Current technology, says Jackson, is somewhere in the middle of that scale. “What consumers actually have in production cars is automation level two, where you see lane assist, autonomous parallel parking, and a lot of the features we’re seeing in Tesla. The testing being done by Google and Uber on test tracks or certain roads is between a three and a four, because it always needs driver intervention in case there’s a glitch.”

Jackson says he is hopeful about the future, even if public perception and legislation aren’t quite there.

“You look at every generation, and they consume and adopt technology different. My parents just got rid of their flip phones and switched to smartphones, but my generation was on smartphones almost instantly,” says Jackson. “In the end, it all comes down to consumer tastes and demand. You can’t sell something that people just don’t want yet.”

Walking toward the parking lot and my own car, I reflect on Jackson’s hope for the future, and the thoughts bring me right back to that pseudo driver’s seat and my heart starts racing again.

Maybe 50 years is the perfect amount of time to get this right.