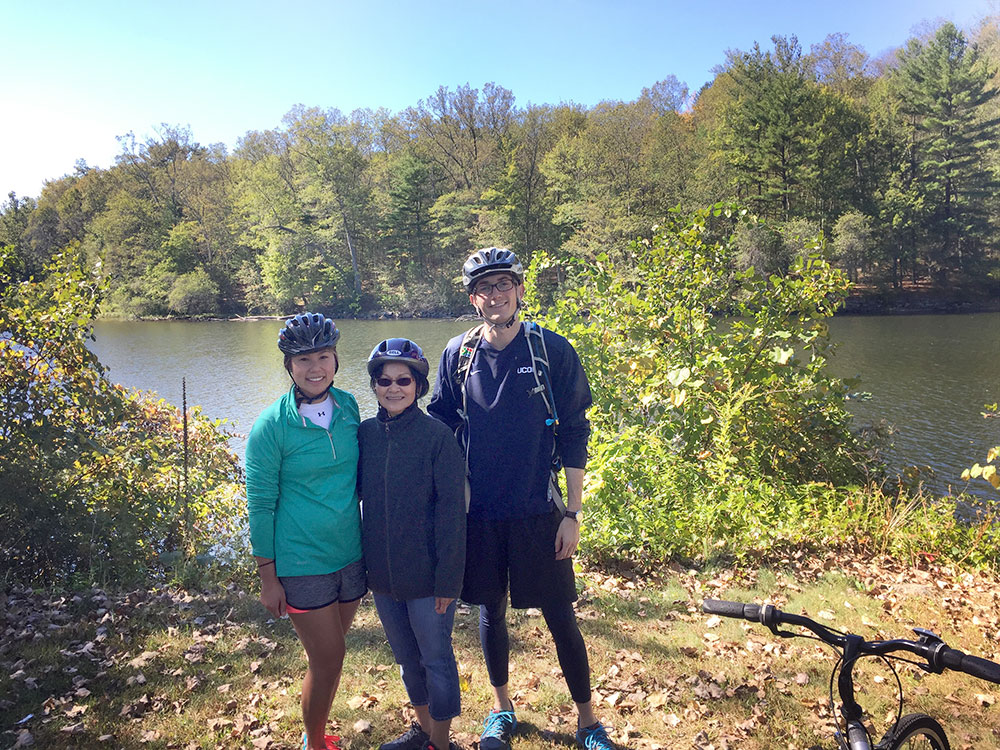 While talking with the writer of “By a Thread,” which begins on page 18, I had so many moments of amazement and horror as she relayed the story of Cambodian refugee Lila Plawecki. But it was something uplifting I found myself thinking about afterward — Plawecki’s relationship with two UConn pharmacy graduate students. They had become so close, the writer said, that the students had invited Plawecki to their May graduation.

Connor Walker ’18 Pharm.D. and Celeste Cheung ’18 Pharm.D. each worked with Plawecki during separate one-month clinic rotations at Khmer Health Advocates (KHA), which is devoted to the health care of Cambodian refugees in Connecticut and Massachusetts. In that short time they formed what all three say is a lasting bond.

A couple days after graduation Cheung shared photos, like the one above, of the three on a 20-mile bike ride they took last year. When I asked what prompted the adventure, Walker said simply, “We’re friends!” Cheung said, “We knew it would make her happy.” They had hardly set out to ride that many miles, says Walker, “but Lila kept asking if we could keep going.” And “she kept telling us to go faster,” adds Cheung. When they got home they did the math and were surprised to see it added up to 20 miles.

Just two years ago, such a thing would have been unthinkable for Plawecki. She was deeply depressed and credits all the people at KHA, especially Cheung and Walker, for helping her to completely turn that around.

“But it’s a two-way street,” says Walker. “Lila helps us just as much as we help her. She’s an incredibly wise woman who has taught us a great deal about life and I consider myself very lucky to have met her.” He and Cheung both say their “Cambodian mom” has had a real impact on their thinking as the new grads consider what they’d like to do with the rest of their lives.

For starters, Cheung has a general residency at Waterbury Hospital, but says she wants to continue working with refugee populations in the future. Walker is joining the Peace Corps in Southeast Asia and is hoping to make it to Cambodia to see Plawecki when she is there visiting her son.