One of the payoffs of the partnership that UConn Avery Point has with Mystic Aquarium and its Sea Research Foundation is courses that give students an opportunity to learn firsthand about potential jobs in the marine sciences and to conduct research at the famous aquarium. MARN 3014 is one of those classes.

Rising seniors Lissa Giacalone and Vanessa Thornberg recording beluga vocalizations at Mystic Aquarium. They hypothesize that the belugas vocalize more before feeding sessions than immediately after.

One of the payoffs of the partnership that UConn Avery Point has with Mystic Aquarium and its Sea Research Foundation is courses that give students an opportunity to learn firsthand about potential jobs in the marine sciences and to conduct research at the famous aquarium. MARN 3014 is one of those classes.

Rising seniors Lissa Giacalone and Vanessa Thornberg recording beluga vocalizations at Mystic Aquarium. They hypothesize that the belugas vocalize more before feeding sessions than immediately after. 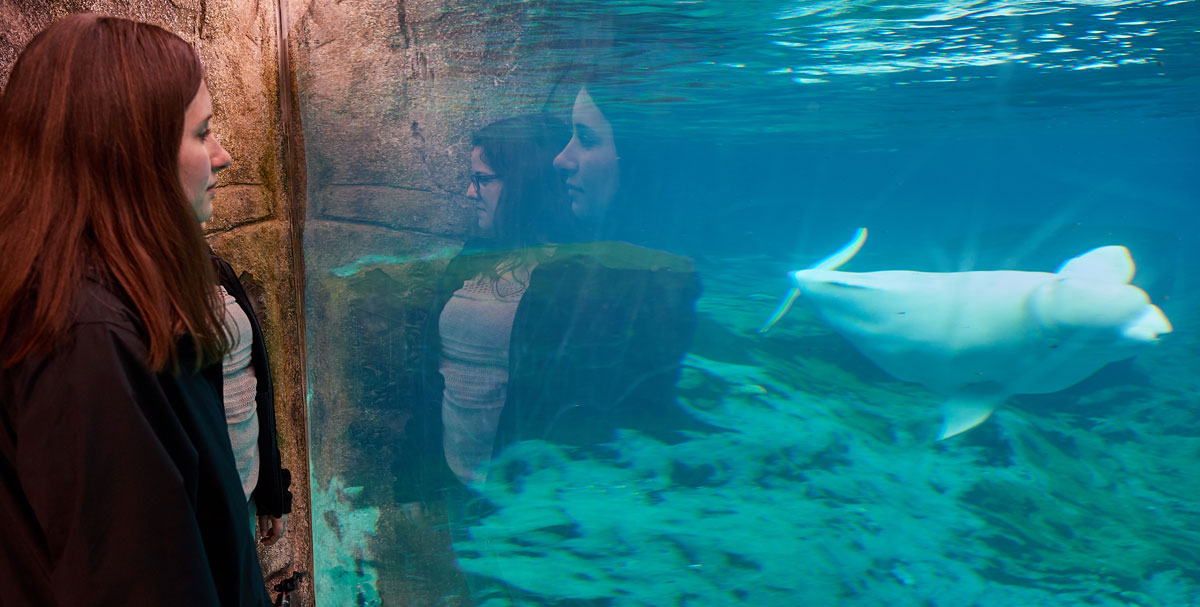 “Tracy is a role model,” says marine sciences professor and Fulbright fellow Ann Bucklin of her co-teacher Tracy Romano, who is not only a marine sciences professor in residence at UConn Avery Point, but also is the vice president of research at Mystic Aquarium. “I can’t imagine a better partner. We come to each other’s classes when we’re in town.”

That last is a big caveat. On the spring day UConn Magazine caught up with the two of them, Bucklin had returned from Finland the night before and Romano was leaving for Alaska in a couple days. Both are active researchers and actively recruit students to help with that research. And, like that classic example of the shark and the remora, the partnership between the two is a symbiotic one.

Romano conducts her research — on the health and immune systems of endangered species — at UConn Avery Point, having moved the aquarium’s labs to that campus.

“I now have this beautiful lab space which we didn’t have at the aquarium,” says Romano. “And I have access to students, faculty, and a library. All of this enables us to raise the level of our research.”

“The ability to go to Mystic Aquarium and see the animals firsthand, to have access to the collection, to get behind the scenes to see what the public doesn’t get to see, and to be able to listen to the staff talk about what it’s really like to work at aquariums ­— for a student, that’s magical,” says Bucklin.

The two teachers say they get to know each student personally and work “aggressively” to match them with meaningful practical research experiences. That could mean at-sea fieldwork, internships, or teaching assistantships.

Romano recalls taking a Native American student with her to Alaska to collect samples from wild belugas. “Being exposed to that culture and seeing what belugas mean to them, it was really powerful for her.”

Bucklin says she asked to teach this class because it is the one that inspired her to become a marine biologist. She remembers being captivated by the “strange and lovely — and mostly tiny and long dead — marine animals” she studied in that class, which were brought to life by the dynamic professor.

“Watching what my professor did inspired me,” she says. “And I’ve always wanted to be that professor — the one the students watch and say, ‘okay I want to do that.’”

This course is a mix of lectures and labs, and in both cases a primary goal is to stimulate critical thinking.

“Conservation biology is a field that has no easy answers,” says Bucklin. “You may be trying to save animals, but what about other interests, such as oil drilling, commercial shipping, or commercial fishing?” In the name of finding the most creative, efficient solutions, says Bucklin, “It’s important to help students learn to see all sides of a problem, to be devil’s advocates.”

Another mission is to help students to envision all the things they can do with a marine sciences degree. Romano is the perfect partner for that endeavor, says Bucklin. “The aquarium is such a wonderful outlet for so many kids to see what they can do.”

Having Mystic for show and tell helps illuminate lecture material, too. “I gave this lecture on dolphins and whales, went into the various toothed whales and then talked about the adaptations of belugas,” says Romano. “And then we went out to the aquarium’s beluga habitat and had the beluga lay out so the students could see these characteristics. We had the whale vocalize and showed students its unique feeding behaviors. Seeing it firsthand is an amazing learning experience.”

Students also observed firsthand how seals and sea lions differ. After learning about it in the classroom, they watched the Mystic denizens strut their stuff.

Labtime for the second half of the semester is for individual or group projects that the students design. Many use the aquarium, where they are free to study, but not make contact with, the animals. 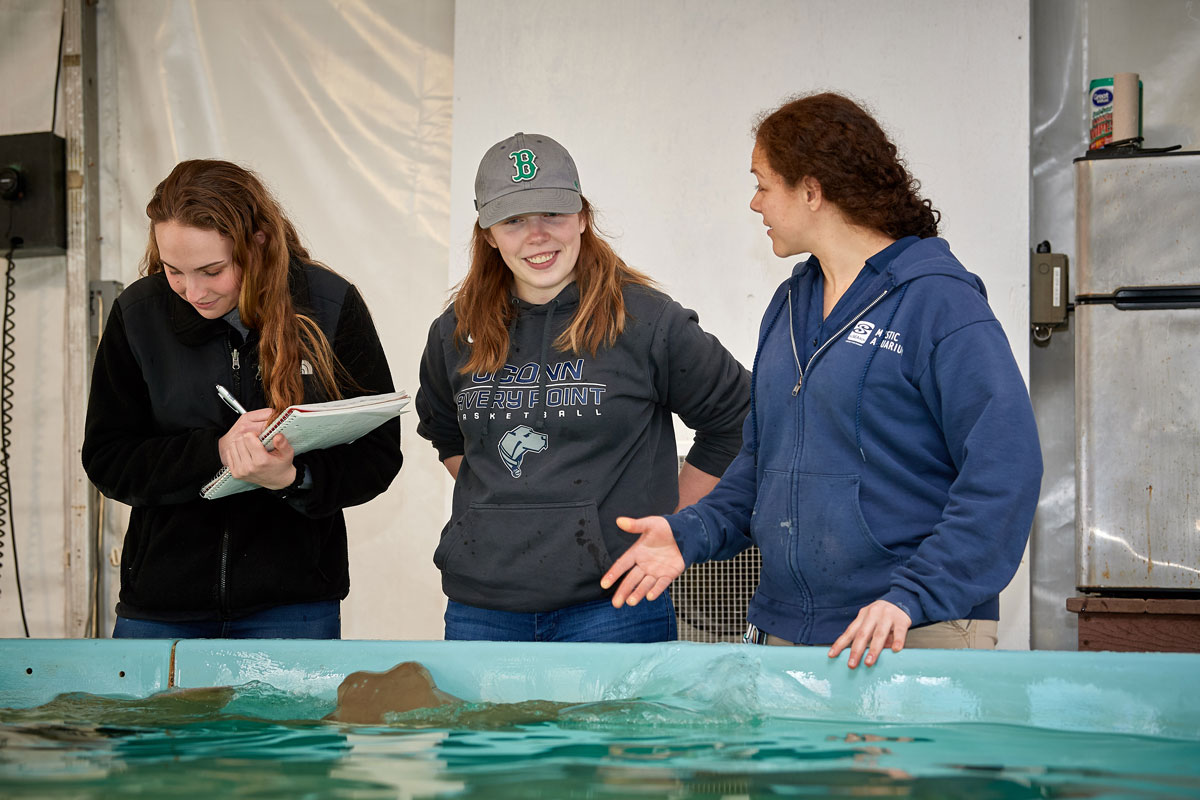 Rising seniors Jessica Hinckley and Mia Dupuis at Mystic Aquarium’s ray touch pool, tracking how ray movement differs when guests are not in the exhibit. 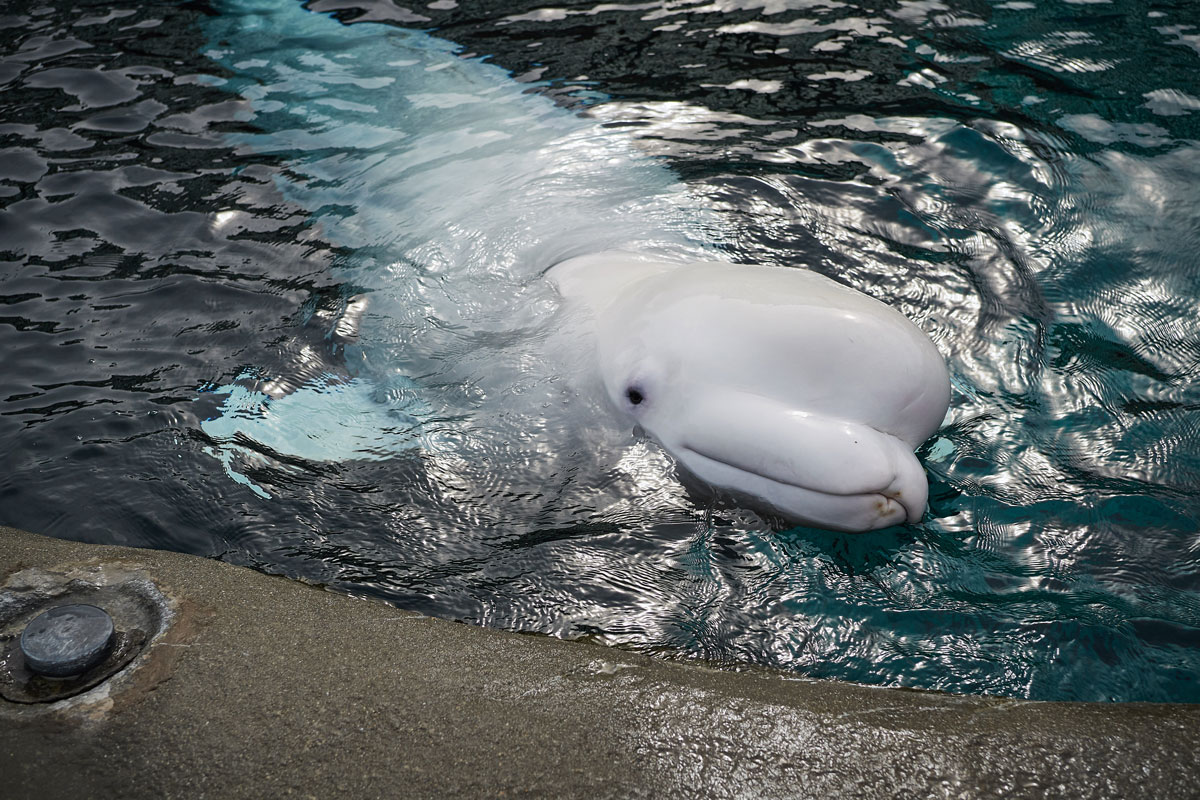 Beluga whale the at Mystic Aquarium.

Why We Want to Take this Class Ourselves

The fieldwork is the big draw, of course — not just at Mystic, but also collecting data from a boat on Long Island Sound, and in visits to estuaries and tidal zones.

The intimacy of the class is compelling, too. During a lecture on estuaries, every student contributed and each was called on by their first name. We had a chance to ask them what their favorite things about this class had been so far. Here are some of their answers:

“Going behind the scenes at the aquarium. We got a real taste of what it’s like to do those jobs.”

“It was really cool to be so close to the animals. The beluga whale came right up to us.”

“Tracy gave a marine mammals lecture and then we got to do a demonstration and give Juno the male beluga a hand sign so he would open and close his jaw. It’s one of those behaviors they learn that helps keep the animals healthy.”

“Seeing how significant a role the aquarium plays in research conservation; realizing that without the ability to study these animals in the aquarium, we’d understand so much less about wild populations.”

“I liked the dogfish dissection.”

“ Everything here is more hands-on. Monday we were at the coast looking at organisms and sea worms and we were able to bring some back to the lab; to look at a polychaete [a marine worm also known as a bristle worm] under the microscopes.”

“There are so many examples of what we can actually do career-wise.”

“Having guests like Dr. Romano come in and seeing what she does.”

“The interaction with the animals is something, getting to see the way they actually work in the real environments is especially helpful if you want to go into marine mammal conservation like I do.”