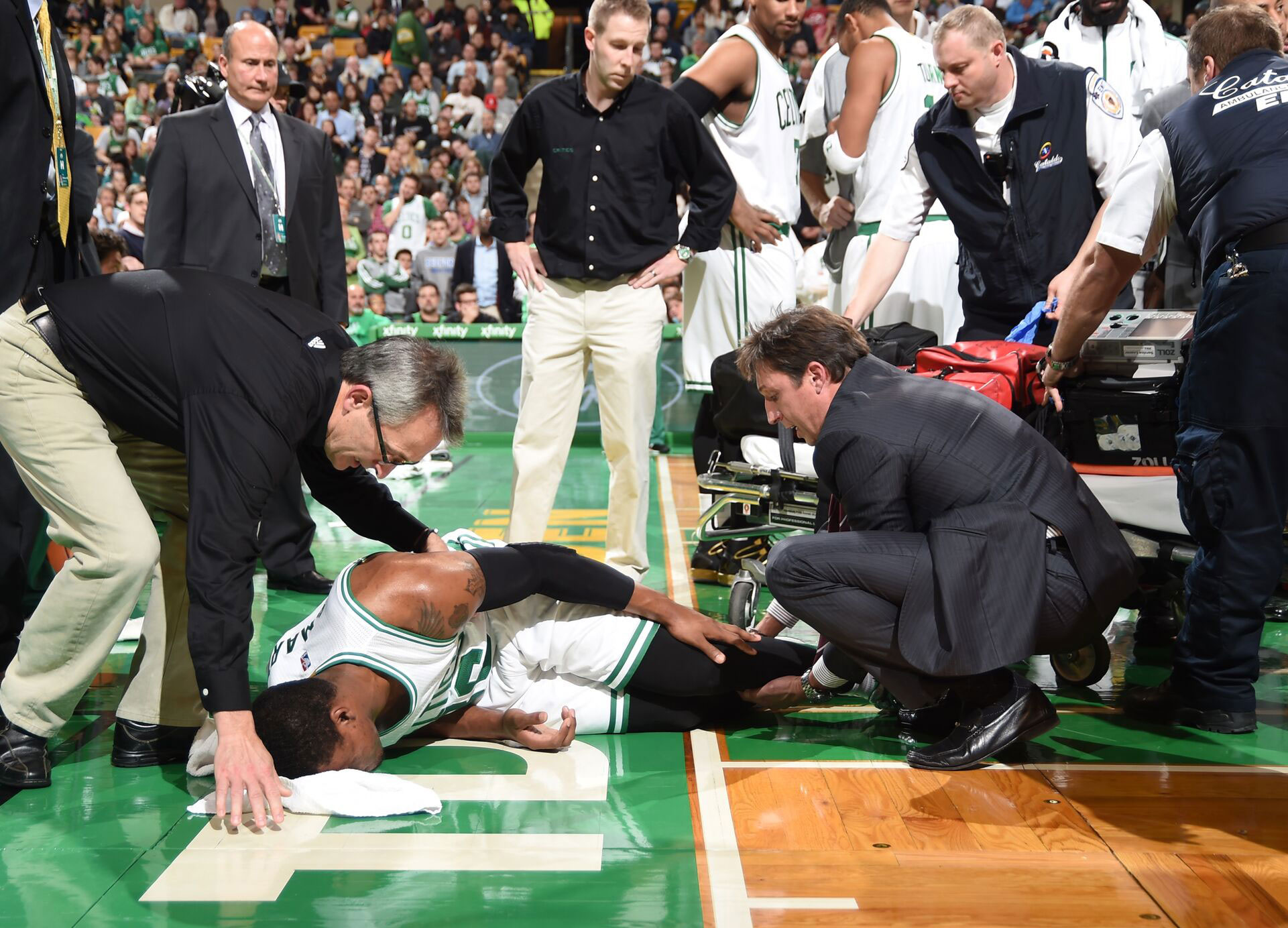 Next time you're watching a Boston Celtics home game at TD Garden, look toward their bench.

When a Boston player makes a clutch play and everyone on the team jumps to exchange high-fives, notice the comfortably-dressed fellow towards the end, sitting calmly, and taking it all in stride.

In addition to this highly-visible position he's held since 2005, McKeon is an assistant professor of orthopaedic surgery at the Tufts University School of Medicine, and works at the New England Baptist Hospital, and the Boston Sports and Shoulder Center - his private practice. He also holds patents for surgical appliances, a shirt that helps posture, and a golf training aid.

"The irony is I'm not a sports fan," McKeon says with a smile. "I never watched sports when I was at UConn. I didn't go to one football or basketball game.

During Boston Celtics home games at the Garden, sitting on the bench with the players and coaches, McKeon is ready to run onto the court in case a player from either side goes down, as with Marcus Smart's infamous ankle injury during a 2014 game against the Pacers (above). "People ask me, when I'm in those huddles, 'What're you asking the guy?' Basically, I'm going through my ABCs, asking basic questions like 'What hurts?' and then coming up with a quick plan to get the athlete off the court," says McKeon.

"In terms of injuries, I think I've seen them all," McKeon says. "One of the scariest ones was in 2011 when Marquis Daniels was lying temporarily paralyzed on the floor after a collision. The arena was full and I had to stabilize his spine before he was carried out on a stretcher. But I was prepared - that's why you have to know your athletes - and I knew he had a congenital neck problem."

That same year, a collision with Cleveland Cavaliers superstar LeBron James gave Celtic Rajon Rondo a dislocated elbow. "I put the elbow back on national TV. When you injure a joint, if you don't set it quickly, the muscles go into spasms and everything starts locking down. He returned to play in the game - I don't know how he did it, he must've been working on pure adrenalin."

Another type of injury McKeon treats are those caused by constant stress on the athlete's aging body. Basketball players endure constant wear-and-tear over the course of their careers. Their feet pound the floor as they run, bang, leap and slam game after game.

"An athlete can keep himself in excellent shape, but the aging body may still experience degenerative injuries," McKeon says. "So I try to do interventions by examining athletes, determining which anatomy type they are, and then advising them about which type of injuries they're most at risk of and, hopefully, save that guy's career."

Caring for a professional basketball team is a yearlong job.

After the season, McKeon performs comprehensive medical examinations on free-agent players the team is considering signing - testing everything from cardiac health to musculoskeletal strength

He plans exercise programs in September to help current Celtics prepare for training camp, where he again examines the players and works with the coaching staff to get everyone ready for another season, which starts in October.

Once the season is underway, he meets with the team's athletic trainers on game days to discuss any concerns, then visits the locker room to check-in with team members and see if anyone wants to talk with him. Just before tipoff, he heads to the bench for the game. Afterwards, if need be, he'll make another round in the locker room.

Having a visible presence in the locker room is important, McKeon says. In fact, it's one of his favorite parts of the job.

"Taking care of an athlete is not just tending to his knee or shoulder," he says. "It's critical for a doctor to understand the mental stress level these athletes undergo. Sometimes, just listening to a player is all you've got to do, and when they're healing, reassure them that they're going in the right direction. Taking EKGs and X-rays are fine, but laying hands on the patient is a lost art. Sometimes just touching patients leave them so satisfied. Because they're thinking, 'Know what? The doctor is listening to me. He knows I care.'"

McKeon's motto: Never give up.

"When I was young, I knew I wanted to be a doctor," he says. "I dreamed it, and it became my focus. I was a very compassionate kid. When I saw others fighting in the schoolyard, I got nauseous. Violence in movies made me uncomfortable. I loved people, and the thought of taking care of them.

"But, I was horrible at school. I scored 890 on my SATs and couldn't even get into UConn. I liked the school's strong pre-med program, but had to go to Northeastern for a year, and then transfer in. After I earned a 3.95 average in my first year of college, my father called the registrar because he didn't believe it."

After graduating, he earned a medical degree from Georgetown in 1993 and then served in the UConn Integrated Residency Program. A fellowship at New England Baptist Hospital, the Celtics' team hospital, helped lead to his current position.

McKeon has also invented several surgical and sports-related devices, including a knee apparatus for golfers that helps stabilize the lower body during a swing, and a shirt that vibrates when the wearer slouches to remind the person to sit up straight.

"Bad posture is pandemic," he says. "It's like a silent disease."

McKeon formed the company Perseus Athletics to sell his medical inventions - a disposable knee holder and a disposable shoulder holder used during surgery - but he admits he's a better doctor than a businessman.

"My basement looks like the sports section of Target," he says with a laugh. "I've got shelves of this stuff. I never really learned how to sell it. I have sold some stuff, but doctors aren't necessarily business people."

In addition, McKeon is involved in research on articular cartilage and joint inflammation, related to performing minimally invasive surgery on shoulders, knees, elbows, and ankles.

Currently, he is the principal investigator of the FDA-regulated VENUS clinical trial, which is being conducted at 23 sites in America and Europe. The study centers on implanting a medical-grade plastic that will replace a meniscus that has been removed via arthroscopic surgery.

The meniscus cartilage acts as a shock absorber, and patients that have had surgery due to a torn meniscus often experience pain and functional limitations after the operation. When approved by the FDA, the meniscus implant, known as "Nu-surface" will terminate the lingering pain and soreness associated with meniscus surgery.

"I'm an anatomist deep down," he says. "I love the human body. I may not be a sports fan, but athletes fascinate me."