The Art of Muckraking

The Art of Muckraking 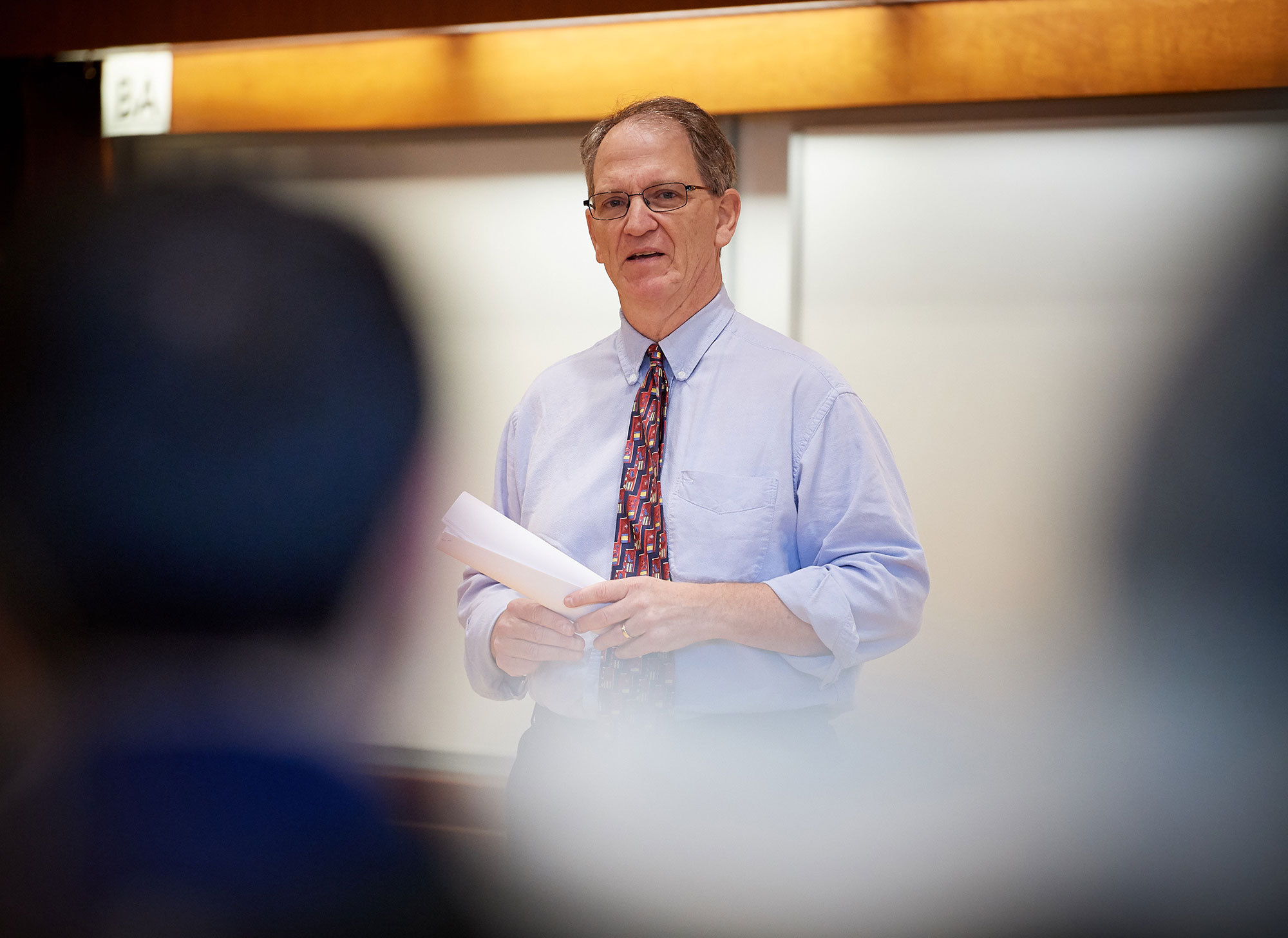 Listening to Mike Stanton talk about his lifelong career in journalism is a lot like reading one of his stories. He speaks in simple sentences, rich with details and colorful observations that draw you in. Storytelling seems second nature to the Pulitzer Prize winner and associate professor of journalism.

That was not always the case. Growing up in Windsor Locks, Connecticut, Stanton was a shy kid. His vivid imagination and love of reading are what led him to start writing, he says. Telling stories and a career in journalism naturally followed. During his nearly 30 years at the Providence Journal, he worked on one blockbuster story after another, either on his own or as part of a team.

At 59, his quiet demeanor belies a reputation for hard-nosed investigative reporting that has toppled corrupt politicians, crooked judges, and bigtime Mafia wise guys. Stanton has a steely resolve when it comes to digging up facts and exposing wrongdoing.

A series of stories about rampant corruption in the state court system earned Stanton and four fellow Journal reporters the 1994 Pulitzer Prize for investigative reporting. The series brought down a corrupt state chief justice and top court administrator and was as rich with anecdotes, plot twists, and flashy characters as any novel. Other standouts include a 1991 probe into the collapse of a private fund that insured 45 banks and credit unions in Rhode Island, and “The Prince of Providence,” Stanton’s best-selling book about the rise and fall of former Providence Mayor Vincent “Buddy” Cianci. 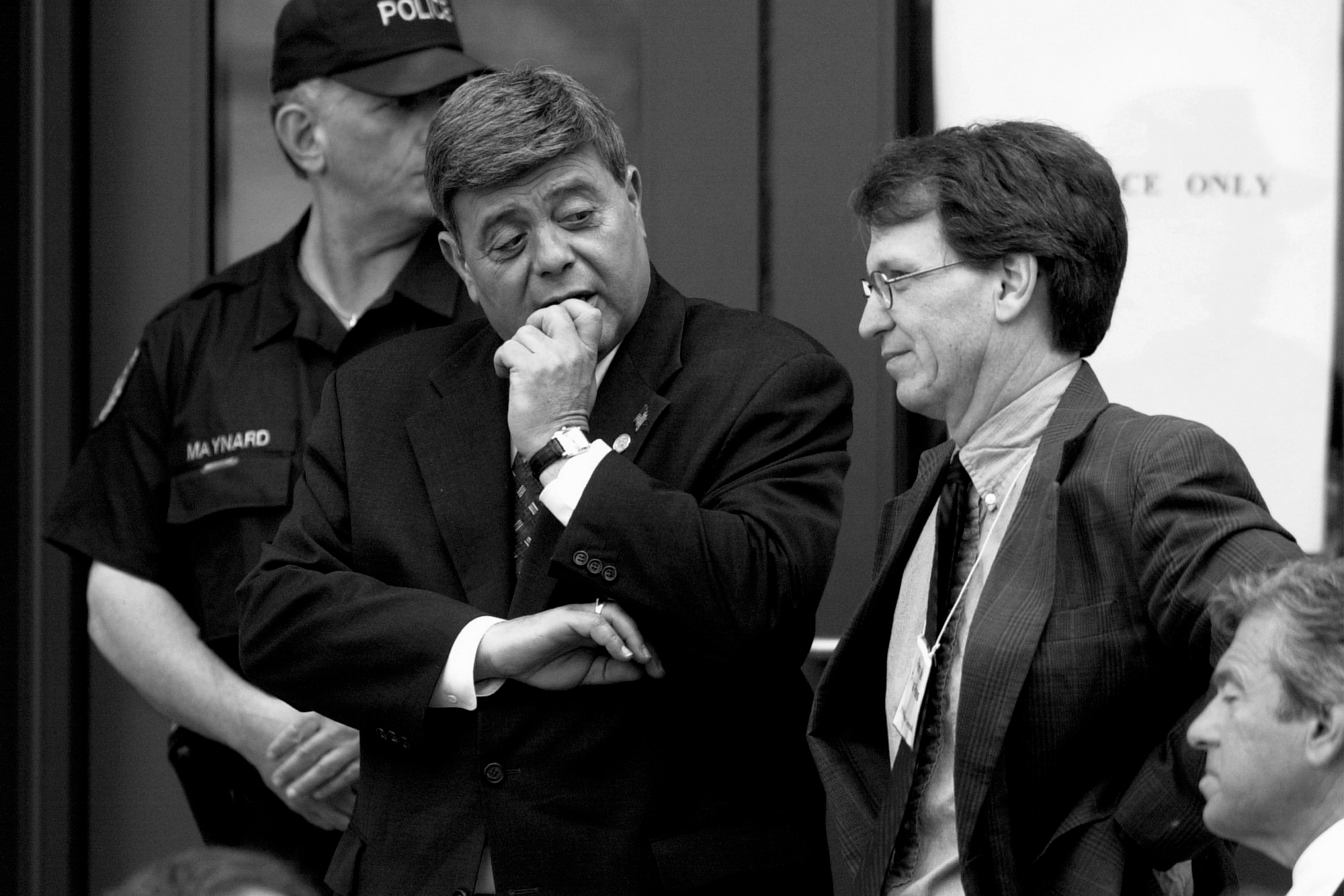 Stanton talks with former Providence, Rhode Island, mayor Vincent “Buddy” Cianci, whom he covered for years as a Providence Journal reporter. Stanton turned his investigative reporting on Cianci for the Journal into a New York Times best-selling book, “The Prince of Providence,” which recently spawned the hit podcast “Crimetown.”

Since joining the journalism faculty in 2013, Stanton has been imparting the wisdom and insights he gleaned from three decades of covering a beat, first in sports and later as leader of the newspaper’s investigative team. Stanton admits he was at first hesitant about leaving daily journalism for academia, but four years into the job he has embraced the role.

His teaching style matches his low-key demeanor, but he keeps classes lively with engaging activities and colorful speakers — not only the old- and new-media professionals he knows but also the characters who have been sources for him and his Journal colleagues.

Notable appearances have included Washington Post political reporter Tom Hamburger; the co-creators of the hit podcast “Crimetown,” Marc Smerling and Zac Stuart-Pontier; and Charles “The Ghost” Kennedy, a convicted drug dealer who went on to become a source for Stanton and the late Bill Malinowski, his friend and fellow investigative reporter at the Journal.

Stanton recalls the day Malinowski and Kennedy came to visit his newswriting class and blew students away. “Here’s this mob guy talking about having parties with cocaine and strippers, about bringing in camperloads of drugs from California. He’s talking about stealing duffle bags with $1 million from a drug dealer’s car in Queens, and he’s got his stripper girlfriend as a lookout.”

These are the types of scenes that animate “Crimetown,” which borrows heavily from “The Prince of Providence.” Stanton is intrigued by the possibilities podcasting represents for him and his students. He and Malinowski worked closely with Smerling and Stuart-Pontier to develop the serialized podcast, an artful melding of journalistic storytelling and old-time radio.

This is a great time to be teaching journalism, as far as Stanton is concerned. Despite the challenges buffeting the newspaper industry and the attacks on reporters and their First Amendment rights, the polarized, chaotic postelection political environment has produced a buzz about the profession and a flood of investigative stories not seen since the Watergate era, he says.

Stanton regularly leverages those headlines into lessons. When news of the sexual harassment suits against Fox News commentator Bill O’Reilly broke, Stanton used it as a springboard to discuss libel, asking his students, “How do you handle a story like that, and what can you say? How do you deal with that and get it in the paper and not get sued?”

For a course on the history of the press, he taps into the musical “Hamilton.” “When you talk about Colonial America — essentially dead white guys — a lot of eyes start to glaze over,” he says. “But when you show a clip from a hit Broadway show and it’s central to the core debate, or you can talk about how the stuff going on in current politics ties back to those days, it makes students wake up a bit and get more interested and engaged.”

When it comes to skill building, Stanton believes students learn best by doing. He invited University deputy spokesperson Tom Breen to visit his newswriting class and told students to treat it like a press conference. As they peppered Breen with questions, Stanton jumped in periodically with pointers: “This would be a good time to ask follow-up questions,” after a question about state budget cuts, and “One of the things Tom could offer you is how to navigate the bureaucracy of the University.”

In the weeks leading up to the 2016 election, Stanton had students stage a mock presidential debate with some students acting as the candidates and others as reporters covering the event.

Journalism may be evolving, says Stanton, but the basics still apply. Solid reporting and strong writing are essential regardless of the technology used to deliver the news. Students would be hard-pressed to find a better model of what strong reporting and writing look like.

During a break from writing the final chapter of a book on boxing champ Rocky Marciano, Stanton reflected on his long career, what has and hasn’t changed about the profession, and the opportunity his students have to invent journalism’s future.

“For a course on the history of the press, he taps into the musical ‘Hamilton.’ ‘When you talk about Colonial America — essentially dead white guys — a lot of eyes glaze over. But when you show a clip from a hit Broadway show and it’s central to the core debate . . . it makes students wake up . . . ’”

Q. Journalism has changed a lot since you got into the profession. What are the most significant changes, in your view? Collapse

A. The biggest change in journalism is the internet. It has changed how people consume news, shortened attention spans, and dramatically accelerated the immediacy of news. We now live in a veritable river of information, and the only way to stay afloat is to rely on the fundamentals of journalism. This means trust. The reader needs trusted sources of information that are fair and objective. The journalist needs to focus on the basics of gathering information dispassionately, diligently, and thoroughly. It is more challenging in a hyperpartisan, 24/7 news cycle with people living in their own bubbles and screaming “Fake news!” at anything that doesn’t fit their worldview. By the same token, this has created a need among consumers for reliable news and for journalists to deliver it. Those platforms are evolving, but the basics are the same. I tell my students that they live in an exciting time because they will help create the future of journalism, just as journalists in past generations have always adjusted to changing technology.

Q. What investigative techniques do you advise your students to use? Expand

A. There’s no magic bullet when it comes to ferreting out information. The biggest advice I give is to use shoe leather. Too many journalists today are content to sit in front of their screens and think that all the information they need is at their fingertips. Get out of your office, out of your comfort zone, and go to the front lines of whatever issue you’re writing about, whether it’s the State House, City Hall, neighborhoods, schools, or something else.

Q. Where do you tell students to look for stories? Expand

A. Stories are all around us. We just have to use our imagination, judgement, and creativity to find them. Pull yourself away from your digital screen. Open your eyes. Be observant. Listen. Get out of your shell. A good journalist is ever-curious and constantly learning.

Q. How have you uncovered some of the big stories you’ve worked on? Expand

A. There’s a saying in investigative reporting: Follow the money. We just kind of followed the corruption. It was everywhere and Rhode Island is such a small, incestuous state that everything was intertwined. You’d investigate corruption at the State House. Then state politicians would appoint themselves to judgeships and court jobs, and you’d start to see patronage in the courts, so you’d start investigating corruption there. Then you’d see the corrupt politicians and the Mafia infiltrating government and the police, so you’d start writing about that. Obviously City Hall was a whole other patronage factory and a place run by the remnants of the old-fashioned immigrant political machine, which the Mafia was infiltrating for jobs and so on.

Q. Tell us more about why you’re so excited about podcasts and “Crimetown,” the hit podcast built around your best-selling book “The Prince of Providence.” Expand

A. I’m always interested in storytelling and new forms of it and how journalism is evolving. Because I teach journalism, I’m more attuned to it. It’s just interesting to look at it through the lens of my students and their future and even how I might evolve. “Crimetown” kind of melds the new and the old, which gets students more engaged too. They are digital natives, which is why the reaction to “Crimetown” is interesting.

I went down to Brooklyn to see the really hip studio where the podcast is made, Gimlet Media, a real trailblazer in podcasting. You see all these young people who know how to edit and cut sound, yet they are fascinated by old-school reporting. I went over to meet Marc and Zac [Smerling and Stuart-Pontier, co-creators of “Crimetown”] at a house they were renting in Providence before we drove over to UConn for them to speak to my class. There were like three other guys in the house. I thought they were just sharing a house with these guys, but they said, “Oh no, they’re our researchers.” They were going to courthouses, through records, state archives. They went through all the credit union stuff. Just old-fashioned reporting.

Q. What is the overarching message about journalism you strive to convey to your students? Expand

A. I tell them that it’s as relevant, or more relevant, than ever. It’s always been under assault. It’s always been affected by technology, whether it’s the printing press, the telegraph, television, or now, the internet. It’s always going to be there. There is always a hunger for it. I don’t see young people today as not consuming news. They are just not consuming old-fashioned newspapers. I tell them it’s an exciting time because they are building the future and we don’t know exactly how that’s going to shake out, but that they can help shape it. Hopefully they can take the skills that we’ve helped them learn and combine them with their own youth, entrepreneurial creativity, and digital nativism to help create something, just like people in college created Facebook. They can invent the future. It is not all hopeless.

Q. Where were you when you learned that you and your colleagues had won the Pulitzer Prize? Expand

A. I was in the newsroom. We’d heard ahead of time that we were a finalist, but in those days the Pulitzer committee still sent out telegrams to the winners a few hours ahead of the public announcement. When we didn’t receive a telegram by noon that day, we were pretty dejected. Then, when the announcement came out around 3 p.m., a photo editor in the newsroom saw our name come over the wire and shouted. We were stunned. Someone quickly produced champagne.