Jim LaFlamme just made a multimillion-dollar bequest to the UConn School of Pharmacy, a gift that anyone who knew him back in the ’70s would never have predicted.

This is, after all, the same Jim LaFlamme ’79 (PHAR) who had a reputation as a bit of a troublemaker with little regard for classroom learning back then. “I mean, I took full advantage of the 18-year-old drinking age when I was at UConn,” LaFlamme says. “I didn’t take anything seriously because I had a photographic memory. For the first two years, I didn’t go to class at all. I took the tests, and that was it.”

LaFlamme readily admits that without the counsel of the dean at the time, Karl Nieforth, he wouldn’t have graduated.“He told me, ‘You may not see it yourself, but you’re destined for something great. You don’t have confidence in yourself, but I have confidence in you.’ I said to myself, ‘Shoot, now I owe this guy something, and I can’t let him down.’”

The dean was right. LaFlamme earned a master’s degree in management from Indiana Wesleyan University and went on to a distinguished and diverse health care career. He served as executive vice president with Coté Orphan, responsible for all global operations within both the regulatory affairs and business development divisions and was a director with Pricewaterhouse Coopers, advising healthcare clients in both the public and commercial sectors. Early in his career, LaFlamme held director of pharmacy, administrative, and executive positions with medical centers in Maine, Indiana, Connecticut, and Colorado.

Four years ago, he started his own company, BioPharma Global in Vienna, Virginia, which shepherds pharmaceuticals used to treat rare “orphan diseases” through the FDA’s regulatory process. An orphan disease affects fewer than 200,000 people. LaFlamme was inspired in part because he hopes to find a treatment for his own inflammatory condition, which has yet to be named. 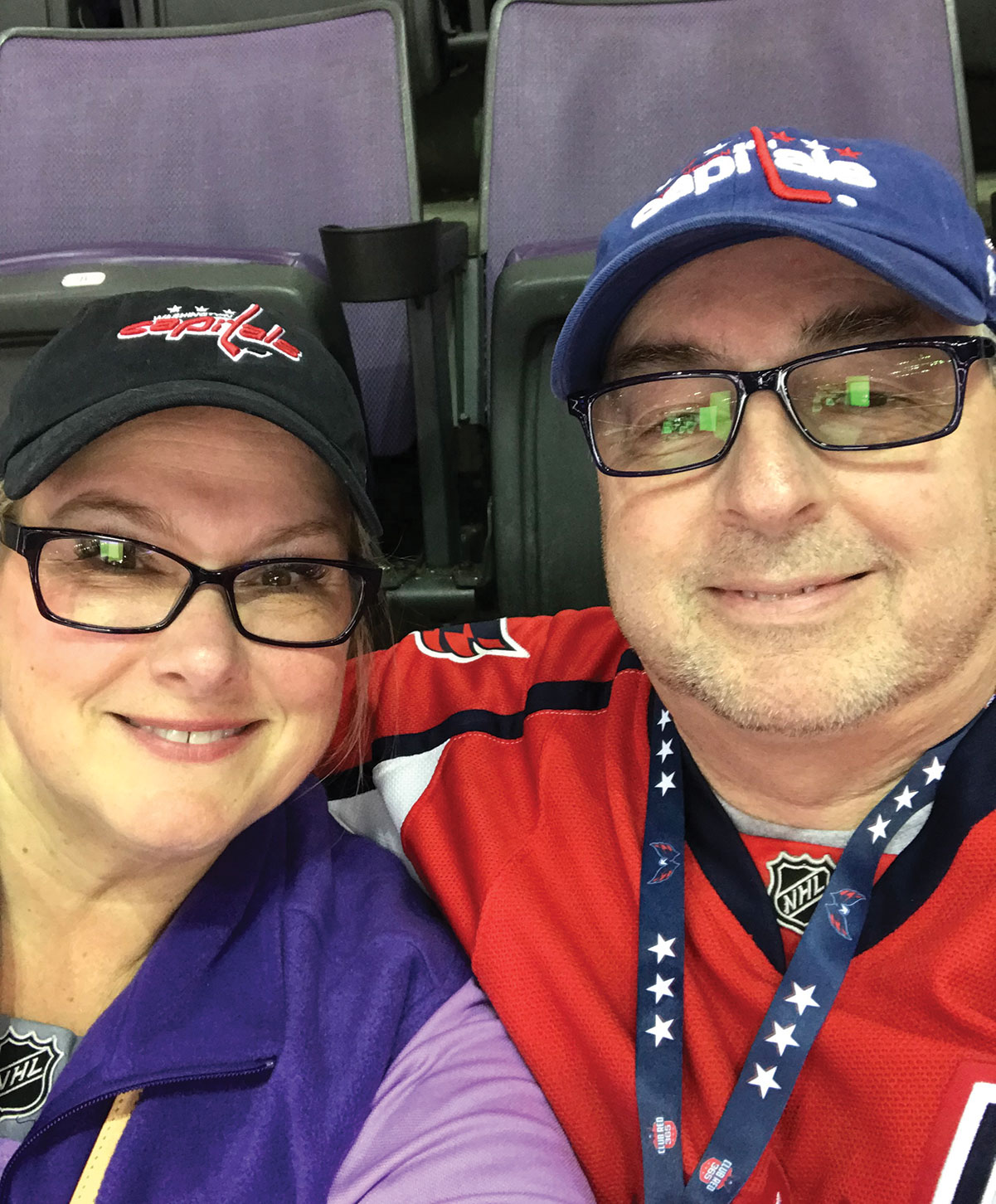 LaFlamme with his wife, entrepreneur Carolyn Thompson, at a Stanley Cup playoff game — the two are longtime Washington Capitals fans. 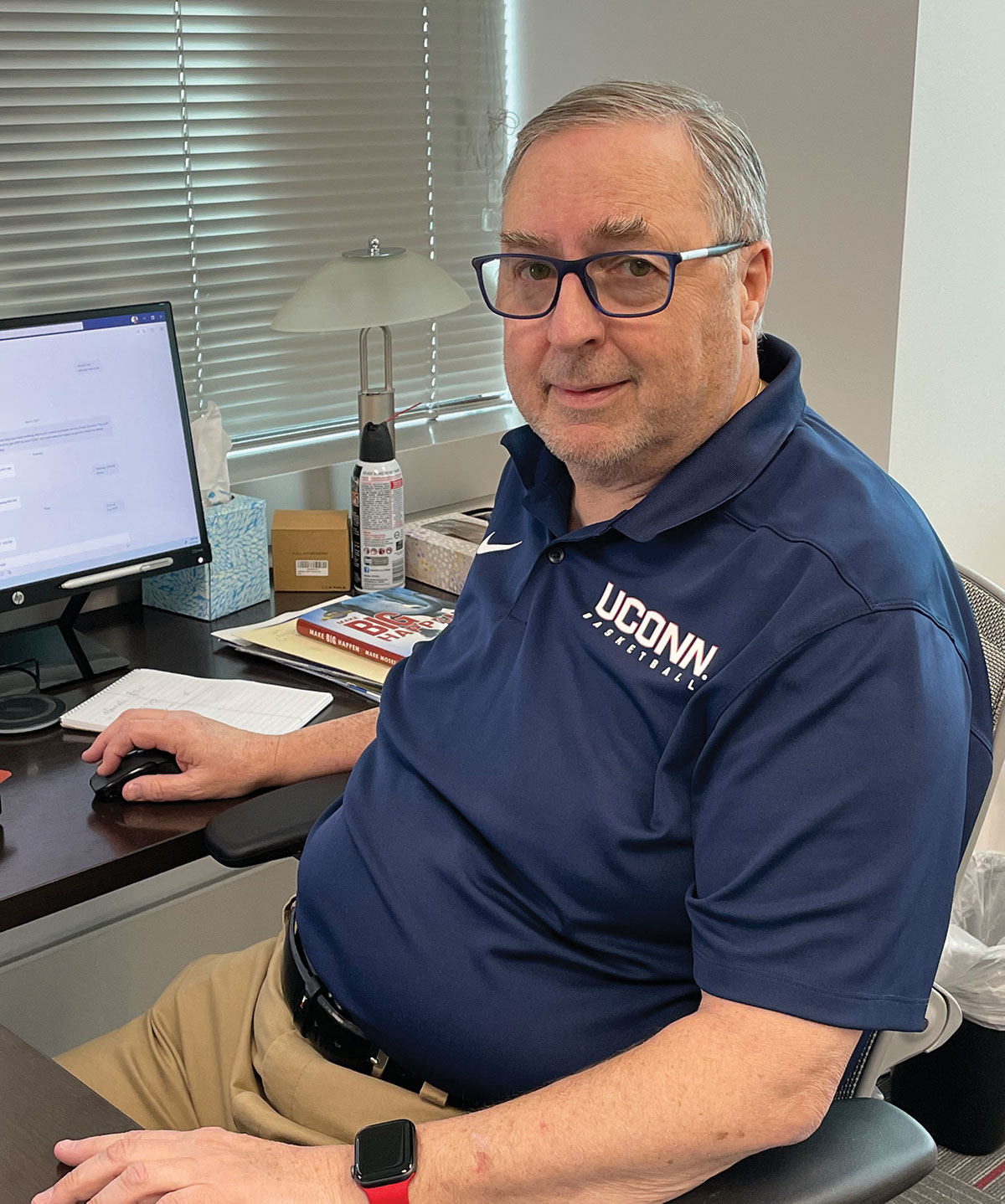 LaFlamme at his BioPharma Global office.

LaFlamme’s multimillion dollar bequest is the largest gift in the history of the School of Pharmacy.

“I realized there was an opportunity here for me to do something really special, really spectacular, and help the School move forward,” he says.

The funds will endow a deanship, enabling the School to conduct more research, purchase lab and clean-room technology, recruit a more diverse faculty, and send a more diverse student body into pharmacy practice — a priority of LaFlamme’s.

LaFlamme, who lives in Fairfax Station, Virginia, with his wife, Carolyn Thompson, an entrepreneur, grew up in South Windham, Connecticut, the oldest of six children. His mother was a nurse and his father held down three jobs to make ends meet. As a kid, he would help his father at the concession stand for UConn football and basketball games. He attributes his dynamic career success to the dean and others at UConn who encouraged him.

“I took full advantage of the education they gave me,” he says. “When I finally graduated, I felt like if I wasn’t successful, I would be letting down a lot of people. So, every time a door opened where I could move up, I took advantage of it. I had to be successful.”

This is not LaFlamme’s first gift. The longtime donor has mentored many pharmacy students. Last fall, he pledged $25,000 to fund programming for the School’s diversity committee, composed of students, faculty, and staff, and challenged pharmacy alumni to match his commitment. The fund pays for activities that foster and enhance diversity, equity, and inclusion for pharmacy students.

He also serves on the School of Pharmacy’s advisory board and provides internships for students at his company, even going so far as working with his wife to review their résumés and run the students through practice interviews before they leave.
“I was not focused when I was in school, so my goal is to help give them a little dose of reality. So there is a little tough love involved, but there’s also the soft side of things,” he says.