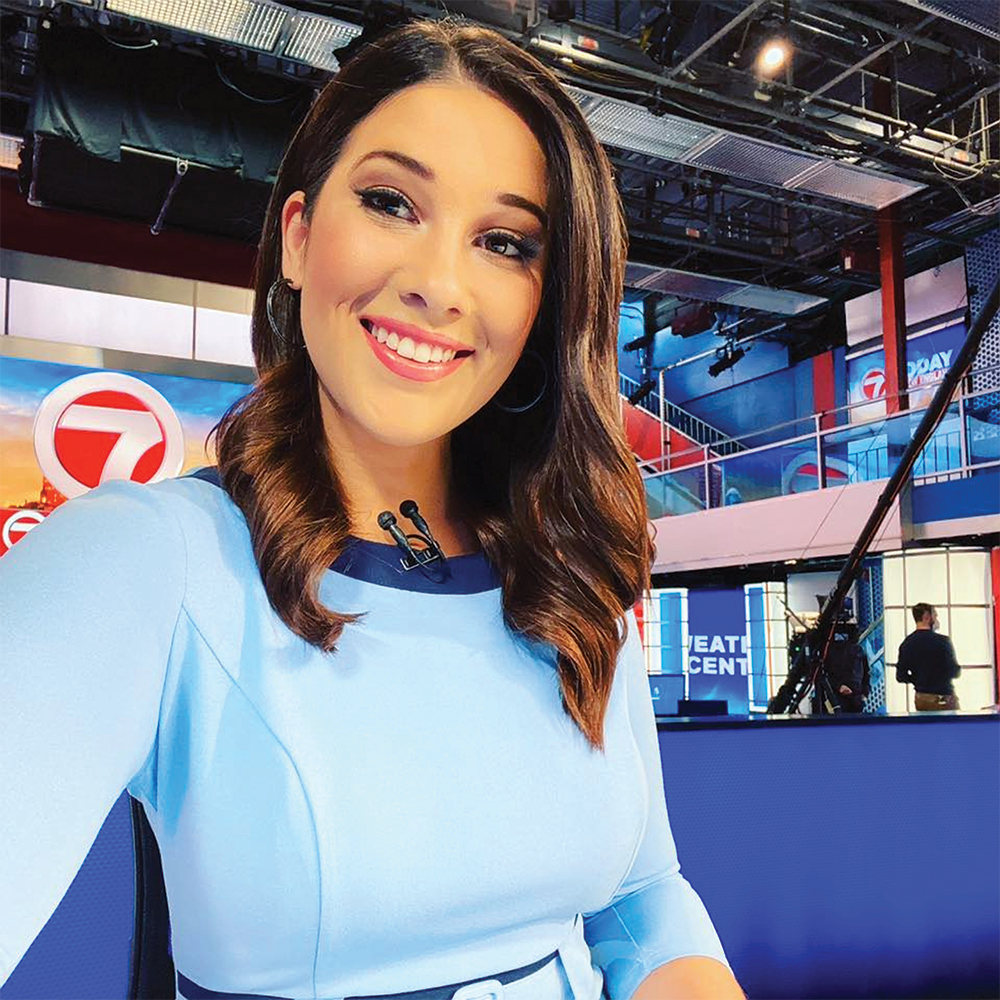 Juliana Mazza reporting the morning news at WHDH 7 in Boston.

Being a TV news reporter is hard. It’s not just the insane hours, rising at 2 a.m. to work the morning shift, or missing important weddings and birthdays, or never having the same days off as your partner, or being told by hurtful trolls on social media that you need to lose weight or change your hairstyle — right after you just got back from covering a blizzard where you were pelted in the face by snowflakes the size of chicken pot pies. But the most difficult part, says Juliana Mazza ’13 (CLAS), reporter and morning anchor at WHDH 7 in Boston, is being human.

“It’s really hard, meeting people at the lowest moment in their life, where they’re facing unspeakable tragedy, somebody who is on their knees in tears, and it’s your job to talk to them.”

“I did a story on Christmas Day,” says Mazza. “I was working in New Orleans, and I got sent to cover an awful car crash.” The sole survivor was the father. He lost his two-year-old, his fiancée, and their unborn child.

“I called him in the hospital, and he wanted to talk about how incredible his fiancée was, how beautiful their child was. I think he found it helpful, being able to make sure that people knew she was perfect. I don’t know if I’ve ever cried so much — that was the hardest day I’ve ever had. My boss called me and asked me if I was okay, because in my live shot from the crash, I looked devastated. Because I was. A big part of being on TV is being genuine. I’m an emotional person. I’m not gonna try to come out and be crazy tough. It took me a while to realize that it’s okay for me to be who I am, and it’s okay for people to see that.”

Growing up in Milford, Connecticut, Mazza idolized a local anchor named Sonia Baghdady. So she wrote for the school paper and did morning P.A. announcements. At UConn, she credits journalism professor Steven Kalb, whose guidance, she says, arrived “without sugar-coating.” She interned at News 12 in Norwalk, Connecticut, where she took every shift they offered her, driving 90 minutes from Storrs, working eight hours writing and editing scripts for other people to read, then driving 90 minutes back for classes. She worked Christmas break, summers, and weekends.

“I worked my butt off because it meant that they knew that I was serious,” she says.

In 2012, she was hired at WWLP 22 in Springfield, Massachusetts, where, after three months, a departure left an opening at the anchor desk.

“I came in at 3:30 in the afternoon for the nightside shift, and my boss said, ‘You want to anchor? Why don’t you take a stab at it?’ Ninety minutes later, I was sitting at the desk.”

She stayed there. She was 22 years old and “greener than green,” the youngest anchor in the station’s history. She was mentored by veteran anchor Barry Krieger, whom she describes as a “giant bucket of knowledge.” She went from Springfield to a job in New Orleans for two years, and from there to Boston, a top-10 market, and closer to home. At 29, her star continues to ascend, and while she is happy where she is, both anchoring and reporting outside the studio, no one would be surprised to see her rise to the national level. It’s still her humanity that makes her stand out.

In New Orleans she reported on 17-year-old Sam Butler, who was shot in the head during Mardi Gras. She checked in on him over the years and did updates. “The New Orleans Saints saw my story and learned Sam played football,” she says. “I connected with Demario Davis, a linebacker for the Saints, who went to visit Sam in the hospital. The team ended up getting him a handicapped-accessible van as a Christmas surprise.” Mazza stayed on the story and covered Sam’s first steps post-accident — collecting his high school diploma.

“It’s my job, as an individual and as a journalist, to find stories that matter,” she says. “If I find a story and I feel like there’s something I can do, on a human level, to try and help, then I will.”