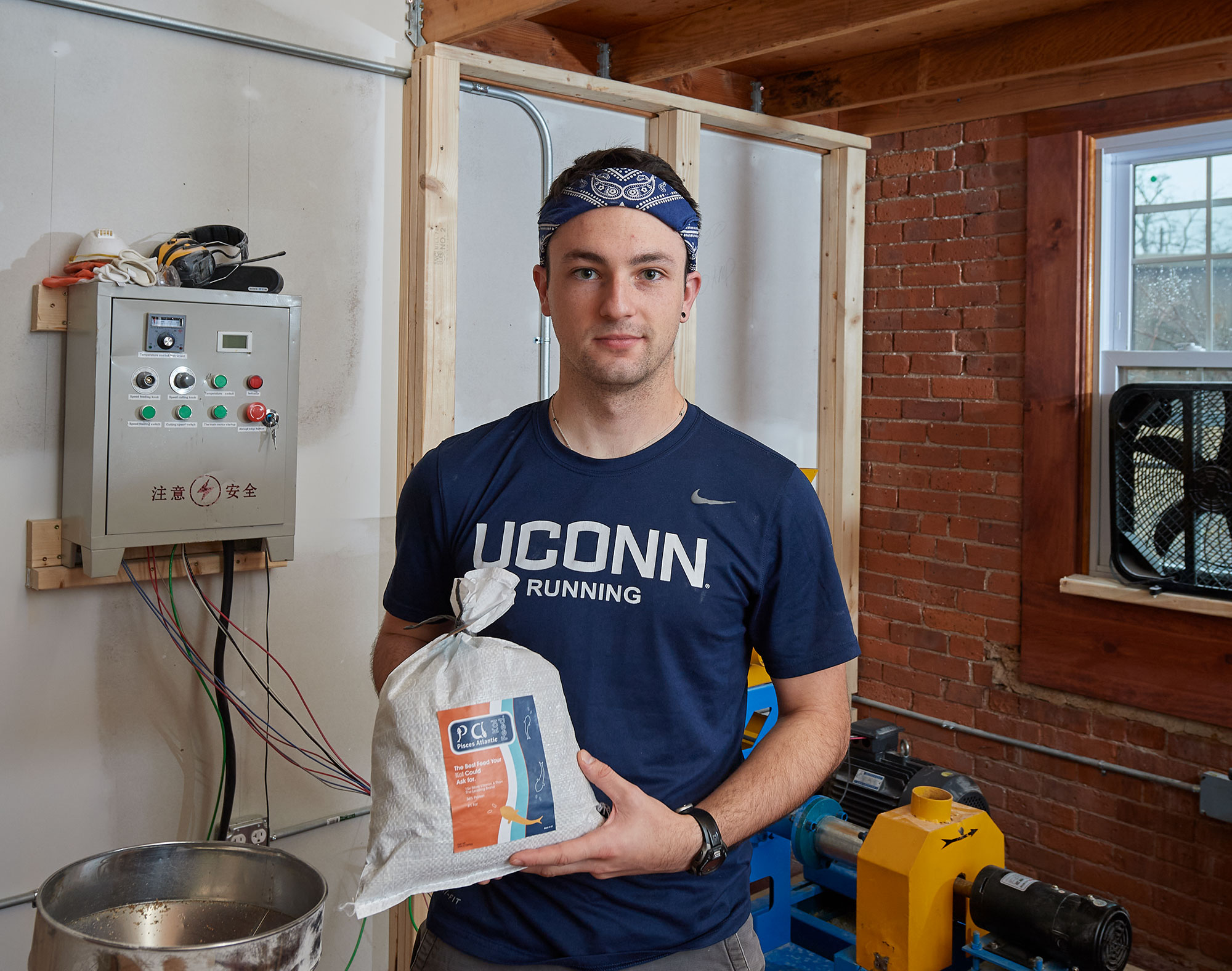 Feeding the Fish that Feed Us

As a kid Peter Goggins ’21 (CAHNR) spent lazy summer days trawling a dragnet along the shore in Clinton, Connecticut, scooping up minnows and sea robins. As he got older, he bought a dinghy and a fishing pole and caught flounder and bluefish. These days his passion has turned to the fish in aquafarms.

It’s not the first capital infusion Goggins has received here. He transferred to UConn as a sophomore after friends told him about the entrepreneurial opportunities here and he proceeded to win awards in UConn’s iQ, Get Seeded, and Accelerate competitions. He also received a CCEI (Connecticut Center for Entrepreneurship and Innovation) summer fellowship.

“I’m not a business major, and I learned so much about business, patents, and financials through the iQ program and others,’’ he says. “I also made great contacts who gave me advice, all kinds of advice.’’

Goggins is focused on nourishing the fish that people eat. The typical American consumes about 16 pounds of fish each year, according to the National Marine Fisheries Service. About half of that seafood is farmed, and that percentage is growing.

Some commercial feeds include feathers, bone meal, and chicken excrement, he says. They can also contain “junk fish” like anchovies, which are high in mercury, and plastic bits culled from the ocean. In addition to his concerns about nutrition, Goggins says he is dismayed by the environmental damage done by conventional fish-food companies as they trawl the ocean for ingredients.

With a school of goldfish and an aquarium purchased at Petco, he started experimenting with fish-food formulae.

The initial results were disappointing, and there were some “burials at sea.’’ But he fine-tuned his fish food, made from a combination of vegetable and insect protein, and tried his Pisces Atlantic compound on a tank of catfish.

“I fed some high-grade commercial feed, and some my own food, and 80 days later, there was no difference in their size,’’ he says. “I realized my food was just as good as the high-end product. That was my big moment!’’

Another big moment came mid-2020 when Goggins moved Pisces Atlantic to a facility in East Hartford from his parents’ home in Middletown, where it has been taking over.

“I have boxes piled in the garage that are taller than me and 50-pound bags of ingredients that I’m milling to flour,’’ he says. “It’s not just the garage. It’s in the basement, the shed, and my bedroom too.”

The new space (pictured above) has allowed him to clean out his parents’ garage (he’s still working on the other rooms) and made production 45 times more efficient.