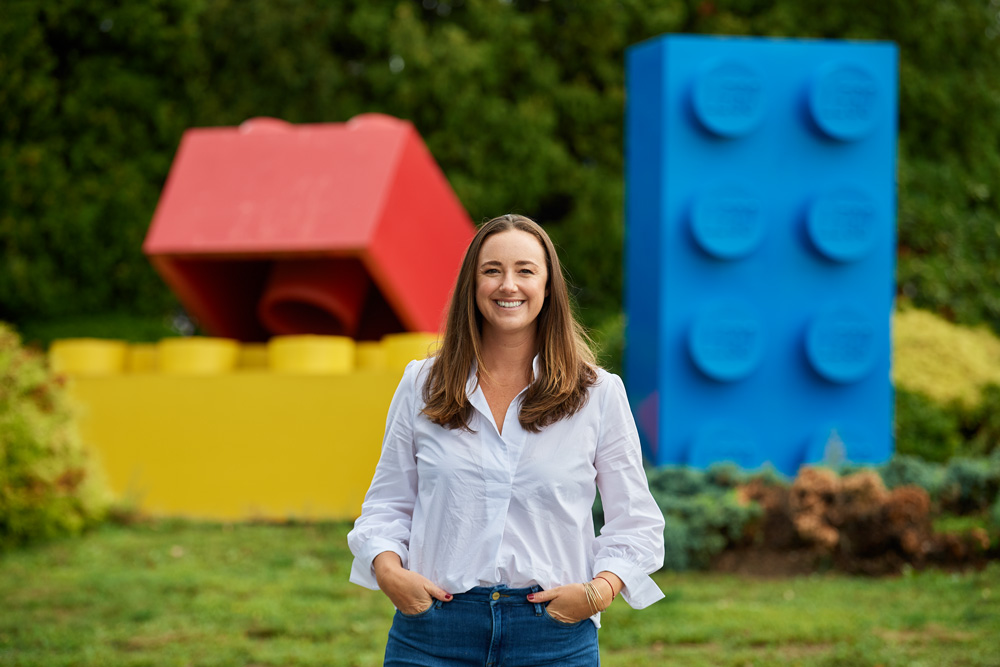 Among the many ways that parents are finding to entertain and educate their children at home during this strange time is one that’s been around for almost 100 years, what those who work at Lego simply call “the brick.”

“You can’t plan for years like 2020,” says Meghan Hall ’08 (CLAS), the Lego Group’s senior director of digital marketing in the Americas, “but adults and kids, during the pandemic, are all rediscovering Lego building as a relaxing, fun family play experience.” Parents also are looking for activities for their kids that encourage independent play and that aren’t digital, says Hall, considering all the distance learning kids are doing on screens. “Lego provides a solution to both of those needs,” she says.

Hall has no problem selling the Lego experience, pandemic or no. “It really does feel like the easiest job in the world,” she says.

New hires at Lego get a crash course in the company’s creative play mission of “build, unbuild, rebuild” through a series of play exercises, one of which is called “six bricks,” says Hall. “The number of combinations you can make with six simple bricks is something in the millions. We do that exercise to understand the vast potential that Lego provides kids in terms of creativity.”

Hall’s path to brickwork began in UConn’s School of Business, where she was a marketing major before she switched to the College of Liberal Arts and Sciences to study advertising and public relations. She found work at an ad agency after graduation and, wanting to try her hand at fashion, ended up gaining social media experience at a remarkably good time.

“I moved to New York City to work for a digital agency, leading their fashion practice. We worked with some really exciting brands like Banana Republic and did the launch of Target in Canada, which was a wild ride.”

She moved in-house then to lead the social media campaign for Vineyard Vines, which remarkably managed to convince men it was fashionable to wear lime green pants with pink whales on them.

“I think, when I joined, we had about 30,000 Instagram followers. When I left, we were closing in on a million. In three years we went from 13 retail stores to opening the 75th the week that I left — that was our store in Grand Central Station.”

Why did she leave? Since high school, she had set her sights on two brands she wanted to work on: Target and Vineyard Vines — check and check. She started to consider what should be next. “I thought I would really love to take a job for a purpose-driven brand with a global footprint, and I would love for that job to be with Lego. And I learned, by chance, that they were hiring for a director of content marketing, someone focused on digital content.”

It was perfect timing because her husband, Chris Hall ’08 (CLAS), had just gotten a job as a high school counselor in Simsbury, Connecticut, and the Lego office is in Enfield, Connecticut. “So all the stars kind of perfectly aligned to bring us back,” she says.

One of Hall’s first challenges was addressing the digital competition. “You want to meet kids where they like to play,” she says. They launched Super Mario and Minecraft sets. “You can actually build Minecraft designs out of Lego bricks. I think there will always be a physical aspect to play,” she says. “Something you touch and feel. The pride of creation comes through a physical connection.” Lego is now the biggest brand on YouTube, says Hall.

Hall’s team also promotes a website that allows kids to share photos of their creations online with each other. “We have an app called Lego Life,” she says, “that is like a kids-only social network, where 100% of the content is moderated by humans.”

The Lego Group overtook Mattel in 2017 to become the largest toy manufacturer in the world, and Meghan Hall was part of the team that got it there.

“I think it’s pretty remarkable,” she says, “that we’re the largest toy company, because we are also the only company that makes a single product.  The others have full portfolios. We make a single system for play — with infinite possibilities.”