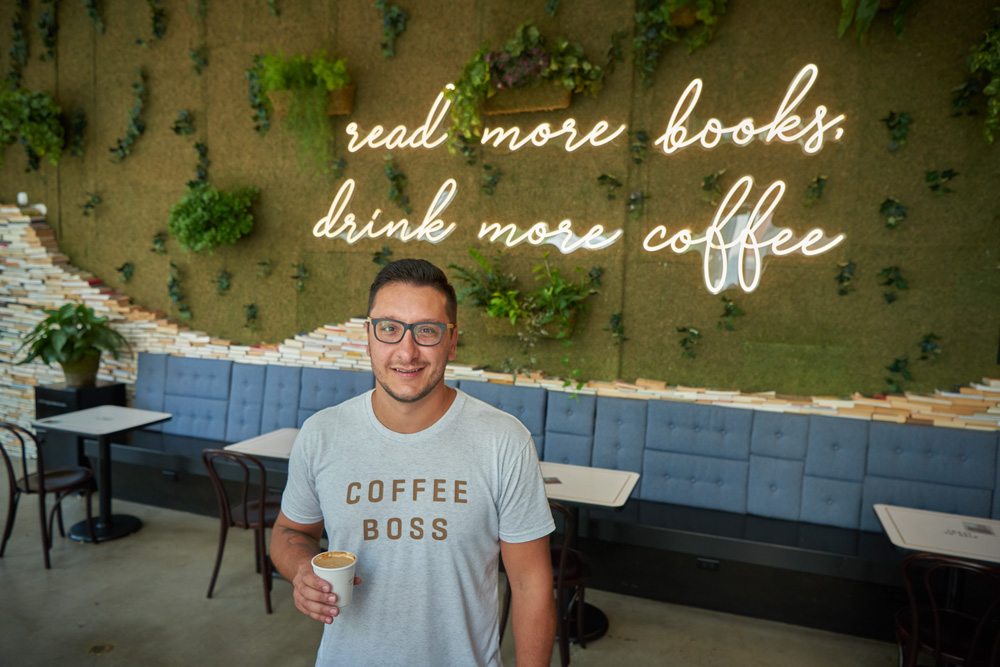 Donatti at Winfield Street Coffee next to Ferguson Library, just down the street from UConn Stamford.

Breno Donatti ’14 (BGS) met his wife, Jeanette, 11 years ago in a UConn-style meet-cute — they were both grabbing coffee in the Starbucks in Ferguson Library. Lucky thing, too, because back then Donatti barely had time to look up from his books; he was carrying a full load of courses at UConn Stamford while also running a farm-to-table restaurant. “I felt a bit like Superman,” he says.

Donatti’s love for the restaurant industry — everything from fine dining to beach shacks — is part of the reason he ended up at UConn. “When I moved to the U.S. from Brazil at age 18, I began working in a pizza place in Greenwich, and I loved the pace. It’s never stopping.” But it turned out Donatti was not actually Superman, and full-time school mixed with full-time work proved just a little too much. “It was the first time I had to withdraw from a course in my life,” Donatti says, “and also my first realization that I can’t do everything.” Lesson learned: Sometimes you have to sharpen your focus on the things that matter. That day in the library, Donatti focused on Jeannette.

And okay, he also focused on coffee. What, was he going to leave the entire restaurant business behind because of one little dropped class? Donatti figured he just needed to find the right niche. “Coffee felt natural, like I could dive right into it,” he says. “I pulled my savings to buy a little rundown, in-the-middle-of-nowhere deli.” That was the Winfield Deli, which had been around for 90 years. Breno and Jeanette renamed it Winfield Street Coffee.

They saved more than the name. While renovating, they came across decades-old sandwich recipes — Cubanos, chicken cutlets, bagels and lox. “I framed them and included many of them on the menu,” Donatti says. The combination of old and new was a winner. Patrons loved it, so much so that locations began springing up across southeastern Connecticut including, in 2019, one in Stamford in the very spot where Breno and Jeanette had first bumped into each other. “We’re right downtown, and the library is a big community hub,” Donatti points out. “One of the goals was to make it a space where people would want to be. It felt like the dream of my life was fulfilled.” 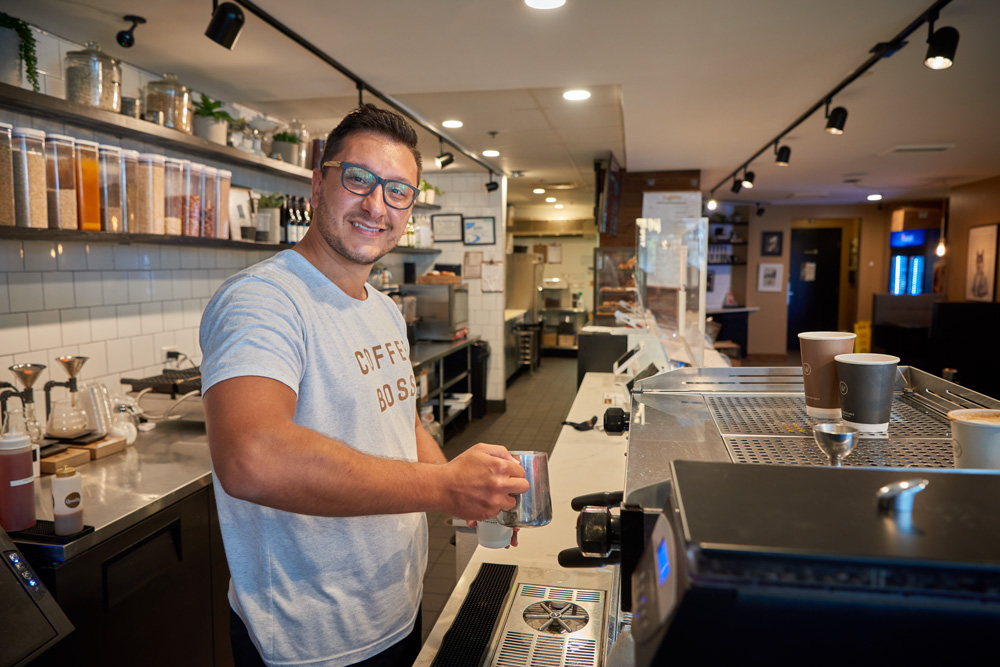 And then, just two and a half months later, the whole game changed. Coffee shops, libraries, entire college campuses shut down. The quick pace that Donatti loved about the restaurant business slowed to a crawl, and in the eerie quiet, he had a bad feeling about what was coming. “From the beginning, I thought this was more than a health pandemic. When this is all said and done, we’ll have tens of millions of people unemployed, and people will need basic things — like food.” With that realization, Donatti saw a way forward that would not only keep Winfield Street Coffee in business but also keep the community fed: a true win-win.

“We thought, ‘Hey, our average ticket is about 15 dollars,’” he says. The cost of one more additional meal — a sandwich and a cookie in a to-go container — was just under five bucks so, thought Donatti, “If we could encourage people to add a little — a cup of coffee or pastry — we’d promise to donate that money.” For every 20 dollars spent, Giving Back — the program Winfield Street Coffee created — donates a meal to one of four different shelters in Stamford whose needs have spiked during the pandemic. Donatti has also reached out to other local businesses to get them to do the same. Customers have responded so enthusiastically, says Donatti, that “some of them even volunteer to deliver the food package themselves.”

It’s caught on fast. In the first two months, Giving Back committed more than 2,000 meals — and, defying all expectations, Winfield Street Coffee’s sales have been on an upswing. “We’ve seen a 4 to 6% increase every week since May 15,” Donatti said in August. Still, while the bottom line certainly counts, it’s not the only consideration. “I want to make sure that we provide and fulfill a need in the community,” Donatti says. “We’re flexible. If things change again and our space is needed for testing sites or whatever, we just want to make sure we’re providing value to the community. Without providing value, there’s no reason to exist,” he says.

After all, if there’s one thing he’s learned in the past year, it’s to be ready for anything.