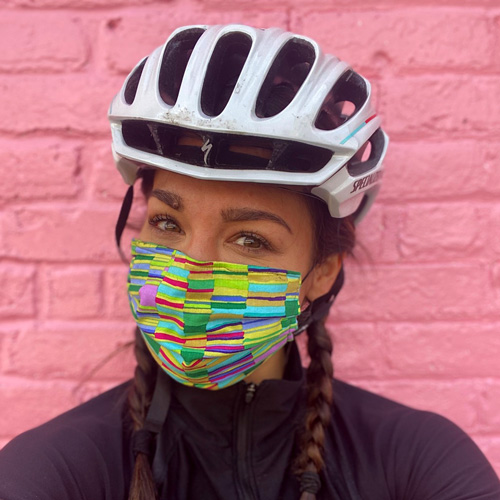 “Wellness” may be among the biggest buzzwords of the past decade (not to mention a $4.5 trillion industry), but it has taken on new meaning as people the world over try to balance widespread uncertainty and stress with a new, socially distanced way of life.

“I think of wellness as the activities and habits that we develop to not only keep us sane but promote overall well-being and satisfy that itch to be a better version of yourself,” says Emily Abbate ’10 (CLAS), a freelance journalist and podcaster who believes her “mission as a human is to empower other people to be their best selves and to move with some sort of intention.”

On her podcast, “Hurdle,” she’s asked more than 100 guests — from Olympic runner Desiree Linden and celebrity trainers Jillian Michaels and Gunnar Peterson to Headspace co-founder Andy Puddicombe and The Meatball Shop restaurateur Michael Chernow — about their #HurdleMoment, a turning point that allowed them to break free of struggle through some form of wellness. You better believe she has a story of her own — and it started at UConn.

Abbate recalls sitting at her desk in Hicks Hall, procrastinating on homework one spring day at the end of her freshman year in 2007, when a digital scale tucked under her bed since move-in caught her eye. She knew she’d gained weight but had no idea how much and was shocked when “204” populated the screen.

“I got off the scale and threw on some old sweatpants and a hoodie and sneakers and did something that at the time was totally not instinctive to me at all, which was run down three flights of stairs and out the door.”

Less than a minute into her run, she collapsed into the grass.

“I was just so exhausted and beside myself, tears streaming down my face,” says Abbate. “I just knew that I needed to make a change.”

Since then, Abbate has lost (and kept off) 70 pounds, fallen in love with running, and completed eight marathons (she had planned to run her ninth in London in April before it was postponed due to the pandemic).

Exercise became such a part of her identity that she leaned hard into the niche a few years after graduation, eventually landing Self magazine’s fitness editor position. When Self ceased print publication in early 2017, Abbate became a full-time freelancer, with health and fitness stories published everywhere from Runner’s World to GQ to The Wall Street Journal.

She not only talks the talk — “Hurdle” recently hit 1.3 million listens and was called “addictive” in The New York Times — she walks the walk, too. When she decided to specialize in fitness writing, Abbate earned certifications as a run coach and personal trainer so she could always stand by her advice.

Her top tip for those looking to start a wellness routine, especially those looking to work out at home during the pandemic is, to borrow a well-known fitness-world slogan: Just do it: “Try what sounds good, and don’t be afraid to change it up if you don’t like that meditation app or yoga class,” she says.

The abundance of digital fitness classes being offered on Instagram, Facebook, YouTube, and Zoom while businesses are shut down means there’s something for everyone, Abbate told listeners on a late-April mini-episode of “Hurdle,” and technology means you can still set a date to work out with friends or family for motivation.

And remember — the point isn’t to achieve fitness excellence.

“Little, small habits lead to major change,” says Abbate. “The most important thing is that you started and are dedicated to making it a habit. The best part about ‘Hurdle’ is this constant reinforcing notion that hard stuff happens to all of us, but we are all capable of handling it,” she says. “It doesn’t matter if you’re the CEO of a publishing house or a world-class athlete, at the end of the day we all face our fair share of adversity.”

Still apprehensive? Remember that Abbate’s fitness life began with a 1-minute run followed by a flop in the grass. And despite all the marathons she’s now run, she says, “that night in the grass was my biggest victory.”