Married to the Arts, Engineering — and Each Other 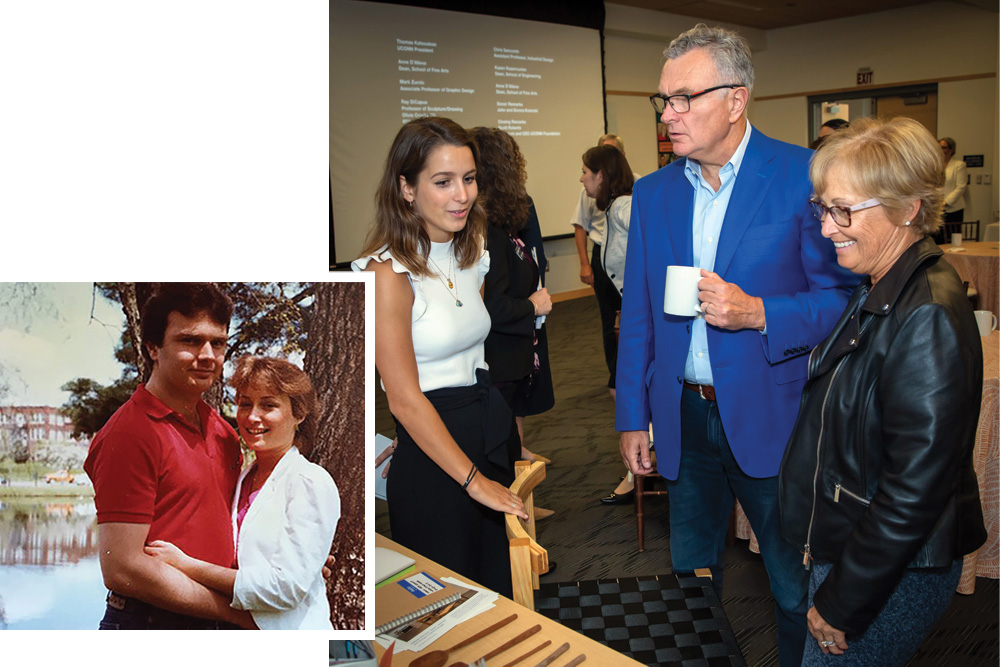 Donna (Samson) and John Krenicki, both ’84, met at UConn and have given back as board members and prolific donors. John received an honorary doctorate from UConn in 2007.

Long before a new institute at UConn bore their name, they were juniors living in McMahon Hall, attending a “bring a date” dinner together.

Donna Samson, a graphic design major from Vernon, Connecticut, and John Krenicki, who studied mechanical engineering and hailed from northern New Jersey, became a couple right away. They both graduated in 1984, married a year later, had three children, and set out on illustrious careers in industry, private equity, and the arts.

And they always knew they wanted to give back to the place where it all began. At UConn, they say, their horizons were broadened, their eyes opened to what else was out there. “We each grew up where we lived in the same house, went to the same school, had the same circle of friends,” says John Krenicki, who estimates that since he and his wife graduated college, their family has moved 15 times. “UConn gave us a willingness to move out, meet new people. It stretched our minds.”

Over the past three decades, the Krenickis have honored their alma mater by establishing endowed professorships in biomedical engineering, genomics and personalized medicine, digital media and design, and chemistry and with scholarships in the schools of Engineering and Fine Arts. When Anne D’Alleva, dean of the School of Fine Arts, and Kazem Kazerounian, dean of the School of Engineering, presented them with the idea for a collaborative institute, they jumped at the opportunity to fund an effort marrying their respective disciplines, giving $5 million to launch the Krenicki Arts and Engineering Institute.

The Institute answers student demand for courses like technical theater and industrial design that teach skills increasingly in demand across the employment spectrum. Starting this fall, fine arts and engineering students can pick up a minor in industrial design or theater/entertainment engineering. Plans for those joint majors are also in the works and expected to be offered beginning fall 2021, says Daniel Burkey, associate dean for undergraduate education and diversity in the School of Engineering, who co-directs the Institute with Alain Frogley, associate dean in the School of Fine Arts. The Institute will also be funding undergraduate scholarships and graduate assistantships, and the university has created two supportive faculty positions, one in each school, with the new hires in place by the fall.

The Institute is poised to become a national leader in STEAM programs. For example, it would be one of just a handful of universities offering theater/entertainment engineering degrees, alongside prestigious institutions like Carnegie Mellon University and Purdue University (where John Krenicki earned his master’s). Through the Institute, UConn theater professor Ed Weingart has led a consultative and collaborative project with Purdue faculty to establish entertainment engineering as a field nationally.

What happens when you bring artists and engineers together this way? Deans from both schools envision a space where different types of creativity can lead to imaginative solutions and radical breakthroughs. It will allow students to explore in new ways such fields as robotics, sound engineering, and digital media, and could lead to collaborations in areas such as virtual reality, therapeutic inventions that can read and respond to emotions, and the application of innovative aesthetics to product design.

The unofficial kickoff of the Institute’s activity was a February workshop and lecture by members of Rhode Island–based design studio Pneuhaus, hosted by the Art and Art History Department. At the start a bystander would be forgiven for their confusion as strips of colorful Mylar, rolls of packing tape, and the type of blower fans you might use to dry up a flooded basement were scattered about the main gallery area in the Fine Art Building.

After a primer on inflatable theory, 15 students from several departments in engineering and fine arts got to work, dividing into three teams that spent six hours strategizing, problem-solving, cutting, and taping, transforming the materials into a huge inflatable sphere.

“At first we were a bit skeptical that we could put together something worthy,” says Gordon Markman ’21, whose individualized bachelor of fine arts concentration in industrial design is pending approval (he’ll graduate before the official major is available). “We didn’t know what would happen until we inflated. There were a host of technical and logistical solutions we had to approach as a team, one being working inside the ball to connect the seams.”

When the time came to test their work, “we rigged our [rainbow] ‘Pride’ ball to the compressor and something truly magical happened — this multicolored 10-foot-tall sphere arose out of the floor. We were all blown away,” Markman says. He is, perhaps, the archetypal Krenicki Institute student.

Fascinated by technology and engineering since he was young — “I would take apart everything I owned” — Markman was thrilled to be accepted into engineering, but after a year felt the creative passion that had been inspiring his personal projects was missing. Discovering industrial design “awoke a huge passion” in Markman, and since he created his own major, “I’ve had the opportunity to work on some really fascinating projects that reside in the broad spectrum between art and engineering and which combine the two,” he says. Similarly, Pneuhaus not only creates inflatable art installations but also inflatable event spaces and even inflatable habitats for NASA, showcasing just a fraction of the diverse applications for this niche combination of studies. 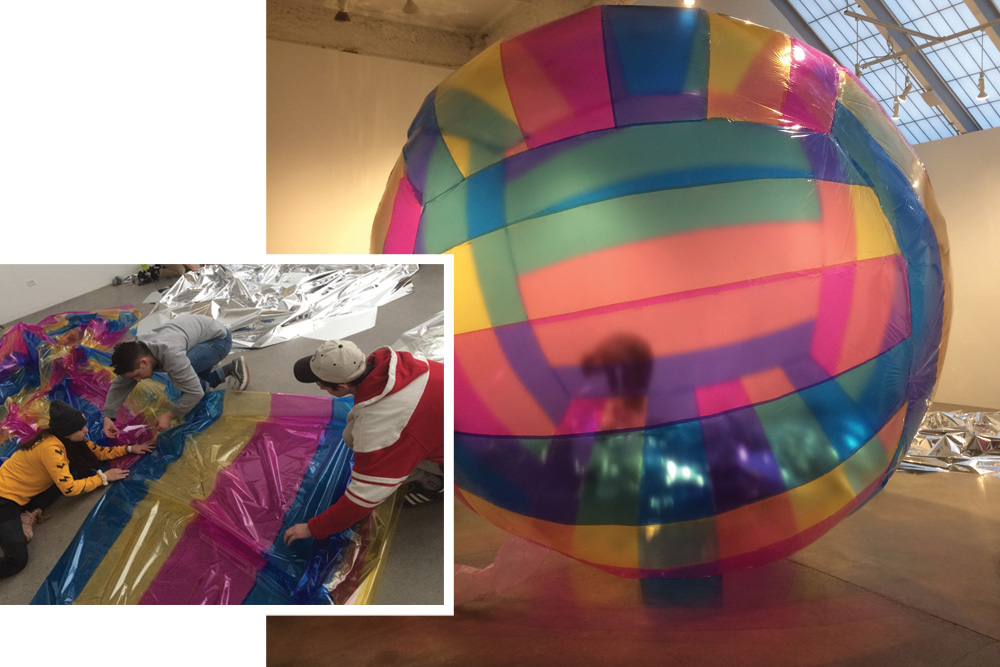 A team of fine arts and engineering students builds a Mylar sculpture at the first Krenicki Institute workshop.

The interactions observed during the workshop exemplified the broader lessons students will learn from the interdisciplinary collaborative, says Christopher Sancomb, the assistant professor who is shaping the newly established Industrial Design program. “One of the things that I really want to focus on is drawing together students from different disciplines so those dialogues can happen,” he says. “Students in other disciplines working together, discovering their overlap, discovering and appreciating each other’s areas of specialty so they can really learn to thrive in cross-disciplinary environments, because frankly that’s where we’re all working, regardless of field.”

Burkey believes the iterative process artists use will be valuable to students with engineering backgrounds. “A lot of engineering students are very high-achieving and very failure-averse,” he says. “Nobody likes to fail, but the thing the design process really insists upon is your first idea is rarely your best idea and rarely your last idea. The design folks really get, ‘Let’s be creative and think outside the box.’ Failure is part of that, and they understand that. Let’s iterate, come around to this idea a couple different times from a couple of different ways,” Burkey says. “I think that’s the biggest thing.”

That kind of eye-opening experience is what the Krenickis say they got from UConn and what they hope students get from their namesake program. Although they joke that they need to go through the program themselves to learn from each other’s differing backgrounds, it’s clear that they’ve been doing just that, balancing each other out with seemingly opposing perspectives, since they met in McMahon.

“I hope that the art majors succeed in their careers, that they have a career,” says Donna Krenicki, an artist and a member of the School of Fine Arts Advisory Board, before John interjects. “A financially rewarding career,” says John, a senior operating partner with the private equity investment firm Clayton, Dubilier & Rice, who previously spent 29 years at General Electric Co., where his executive positions included vice chairman and president and CEO of GE Energy.

“Well, emotionally and intellectually rewarding and also creatively rewarding,” Donna finishes. “I hope that they can find a place to put their talents and make some money off of that.”

John Krenicki sums it up: the world isn’t black and white; they hope students who go through the Institute programs learn to adapt, just like they have throughout their lives and careers, moving new places, trying new things. “For the art students, I hope that they have more exposure to the STEM field, because that’s where the world is heading. “And for the engineers, that they’re more well-rounded and more creative. You look at a company like Apple — it’s a design company, not purely tech and engineering, so you see the importance of having engineers who can see a bigger picture and are more interesting, more well-rounded people. That’s the vision.”