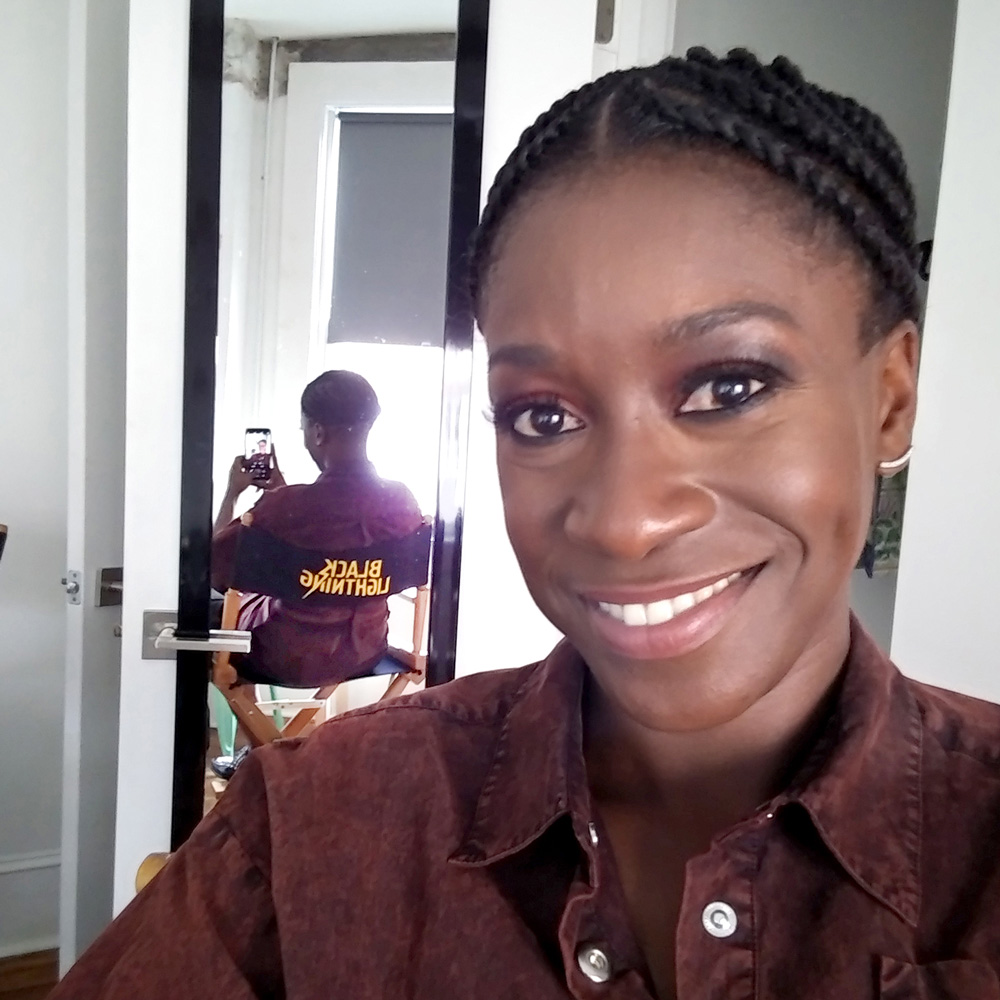 You might think moving from Los Angeles to Atlanta would be bad news for an aspiring actress. Adetinpo Thomas ’15 MA would tell you otherwise.

“The industry is really booming in Atlanta because studios get tax credits,” says Thomas. “A lot of the Marvel things are shot here. ‘Walking Dead’ is here. ‘Watchmen’ is here. The terrain is really interesting in Georgia. You have everything from mountains to rural communities to cities. Things are written and pitched and cast out in L.A., and then they come in and do local casting for day players here.”

Thomas auditioned multiple times to be a day player before booking a recurring role on the hit CW network show “Black Lightning,” which tells the story of the Pierces, a black family headed by high school principal Jefferson Pierce (Cress Williams). Some family members have superpowers. Thomas plays Jamillah Olsen, crusading reporter and love interest of Jefferson’s daughter Anissa (Nafessa Williams). Less is made of Anissa’s gender preference than of how, if you date a person with superpowers and say something that makes them angry, they might throw a bus at you.

“Representation matters,” Thomas says. “On ‘Black Lightning,’ you see this family that is fighting for justice together, in a way that is cathartic. Obviously, in this current climate, there are a lot of people in America who aren’t getting justice. Anissa is a black female superhero who’s a lesbian. In this show, people are just people, and making a character’s entire personality revolve around their sexuality is not something we do. We don’t do it to straight people, so why would we do it to people who identify on the LGBTQ spectrum? Anissa just so happens to date women, but that’s not the only thing that’s interesting about her. In a way, that representation is groundbreaking.”

The characters on “Black Lightning” draw strength not just from superpowers but from family. In a touching scene at the end of season two, Jefferson Pierce, who can shoot lightning bolts from his fingertips, breaks down and cries because he’s so happy to know his family is safe. Superheroes who cry are rare.

Thomas’s parents immigrated to Los Angeles from Nigeria and moved to Atlanta when Thomas was in high school. She credits her family with keeping her from that “struggling actor eating tuna out of a can” predicament. “If I said, ‘Hey Mom, can I have some dinner?’ she’s going to say, ‘Hey, you could move back.’

“Having my family supportive and on board with everything I’m doing has been huge. Acting can be so variable, and this is probably the first time in my life where I am a full-time actor, and that’s what it says on my taxes. That’s my source of income.”