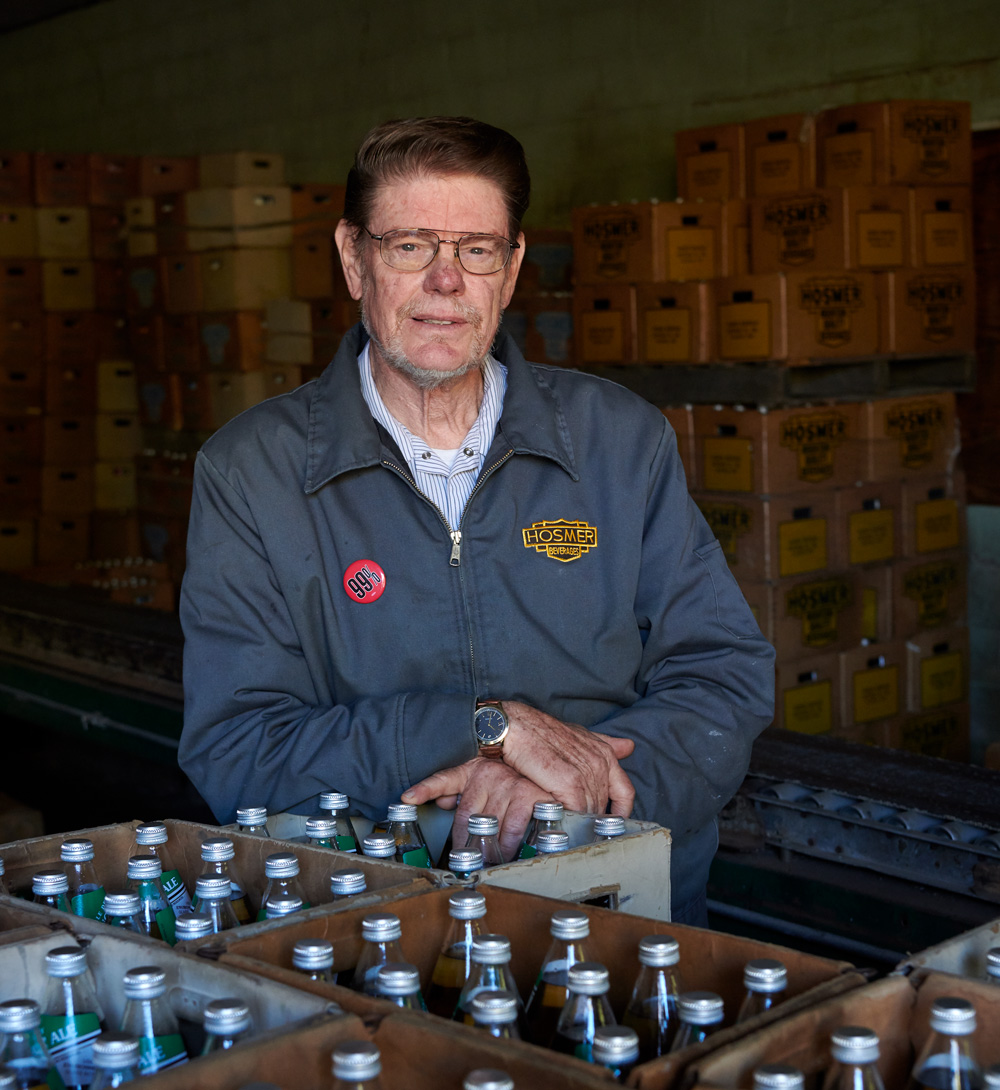 Potvin at Hosmer Mountain Soda’s Willimantic, Connecticut, bottling plant, where he was filling — and refilling — cases of his glass-bottled soda for local customers.

At a time when the average life span of an American S&P 500 company is 20 years, Bill Potvin ’69 (CAHNR), ’75 MS likes to remind people that his Hosmer Mountain Soda Company “launched in 1912, the same year as the Titanic ­— and one of us is still afloat.”

The gray and white storefront on Mountain Street in Willimantic hearkens back to the days when blocks of ice and glass bottles of milk and soda were delivered to a homeowner’s doorstep by horse-drawn wagons. Potvin and his co-owner brothers upgraded that means of delivery, but little else. 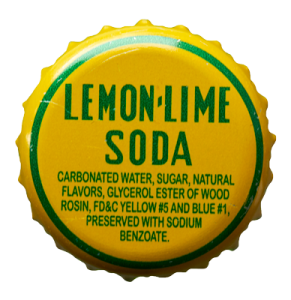 Potvin is tall and lean, with a close-cropped beard and a broad, friendly smile, happy to talk to customers. When a woman from a local theater company brings in three cases of empties to exchange for fresh sodas, the 73-year-old Potvin springs up to help her unload her minivan.

The bottle exchange system is part of Potvin’s old-fashioned anti-corporate way of doing business, along with his personal approach to customer service. Where the big soda companies offer a five-cent refund, Potvin offers fifteen cents, which is about what he would pay for a new bottle.

“We incentivize people to bring back their empties,” Potvin says. The current system makes no sense to him.

“You take a glass bottle, drink the soda in it, throw it in a bin, crush the glass down into little pieces, and then make those pieces back into a new glass bottle. That’s not really being green.”

Potvin’s father bought the business in 1958 and had a Great Depression–era mentality.

“My dad had a couple of white step vans, and they said on the side, ‘Delivered to Your Door for Less Than at a Store.’ People said, ‘Are you kidding me — you’re going to bring it to me and I’m going to save money instead of going to the market?’ But he could do it because he had his kids helping him. We were getting paid peanuts. And every time we talked about raising the price, my dad would say, ‘No, don’t raise the price — we’re going to go out of business.’ You can never quite shake that.” 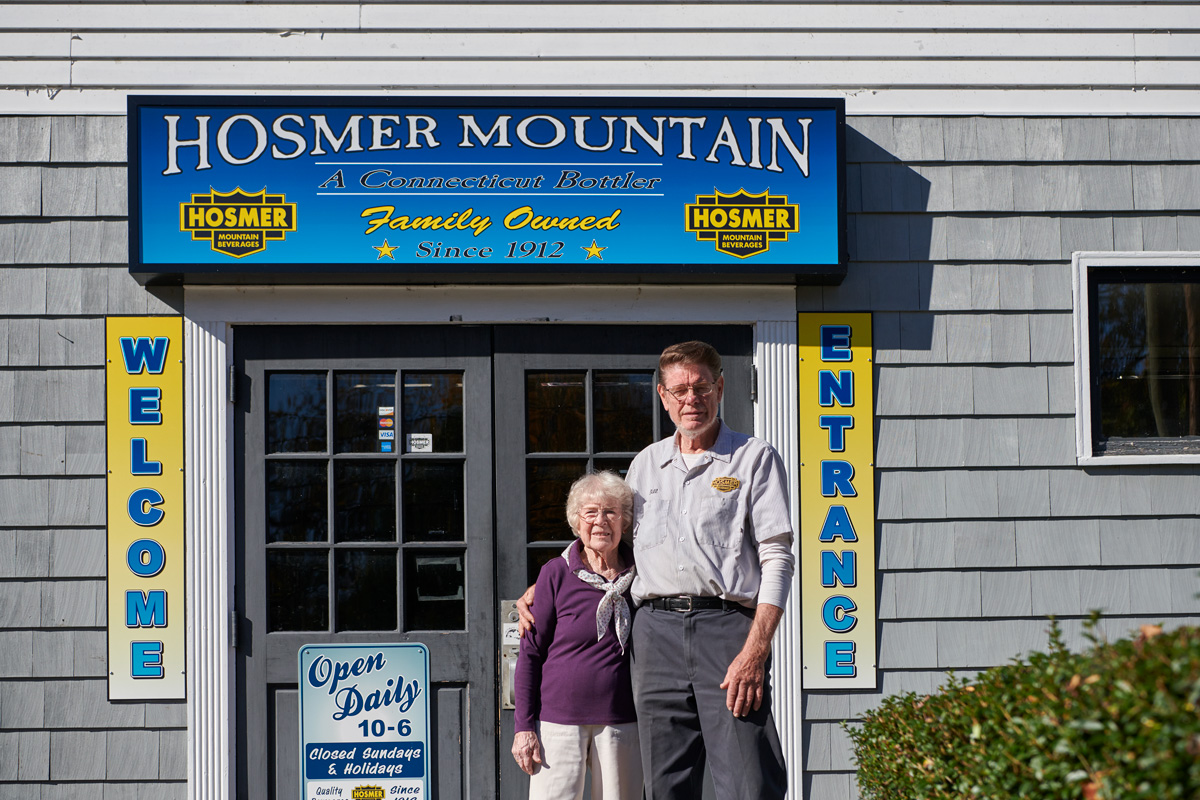 Bill Potvin '67 (CAHNR) with his mother at the Hosmer Mountain Bottling Company in retail store in Willimantic .

Potvin got his agronomy degree from UConn in 1969, served in Vietnam, and came home to get his masters on the G.I. Bill. As the company flavorist, he sometimes uses his chemistry skills to reverse-engineer other popular sodas, to improve the quality of the Hosmer product line, which he vowed would be second to none, or to invent new flavors, sometimes failing.

“We tried strawberry-rhubarb, but it was too tart. You also have to watch out for over-flavoring, because if the aftertaste is too strong, people find it annoying and won’t come back to it.”

One area in which Hosmer Mountain was ahead of the curve was their flagship antique flavors, including their best seller, root beer, as well as birch beer, sarsaparilla, and cream soda. Other soda companies might describe their hip new throwback products as “artisanal curated hand-crafted bespoke” sodas. All Hosmer had to do was not change anything. Potvin shows me the antique label on a bottle of root beer.

“That was probably a state-of-the-art design in 1916, when we first used it,” he says. They’ve tweaked it a little and added color, but it’s essentially the same design.

“The beverage industry is constantly changing. First, they thought everybody would switch to diet sodas, but that didn’t really happen. The original single serving of Coke was six-and-a-half ounces, which went to eight, then 10, then 12, and now it’s 20 ounces. At the same time, sales for Coke and Diet Coke are way down, so they’re buying into health drinks and vitamin waters and such. Hosmer has a really great pomegranate-flavored energy drink, but with less caffeine than drinks like Red Bull and Monster have. I’m not interested in hearing a Hosmer product put someone in the emergency room.” 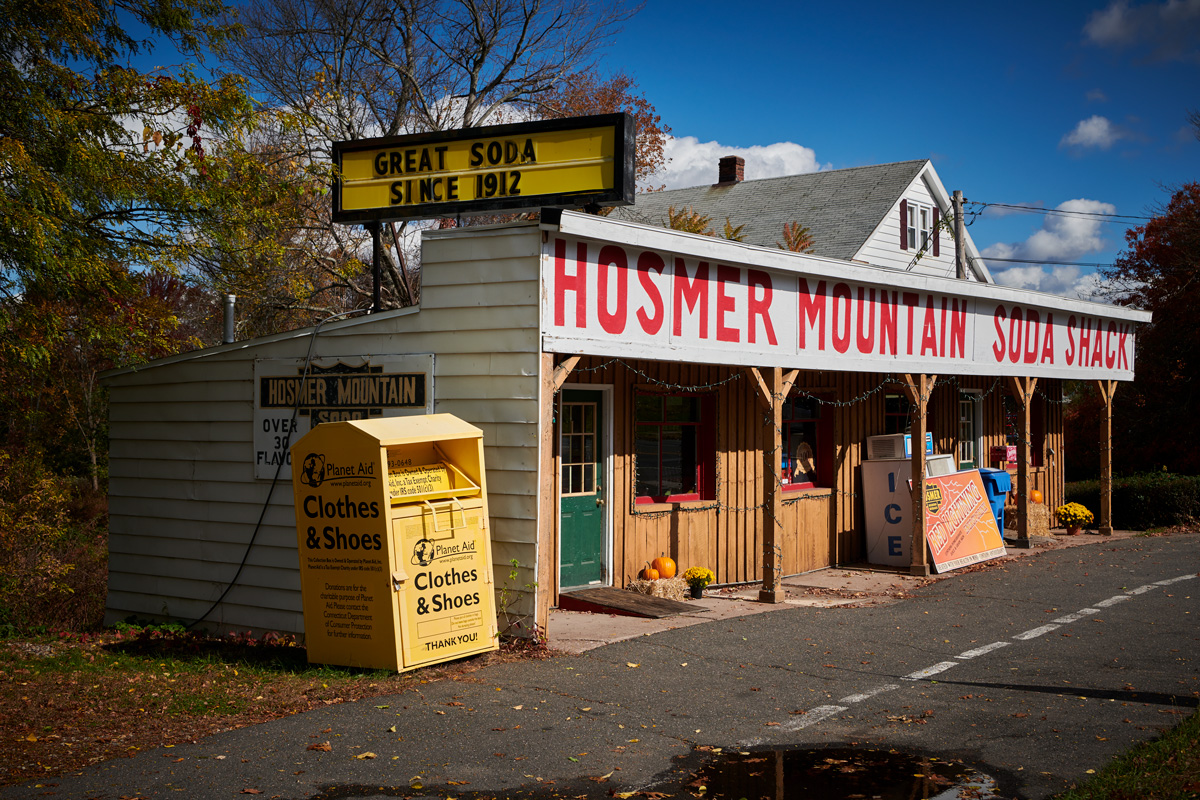 Hosmer could easily rest on its laurels. Its root beer won fourth place in a national root beer taste-off, ahead of 84 other brands, including best sellers like A&W or Barqs or Mug.

“The next thing is probably going to be CBD oil,” Potvin says. “We’re looking into that. We’re not totally sitting on our hands. But we’re also selling the company to a new owner, so we’ll see.”

Potvin hopes to have time in retirement to pursue his second greatest passion: social activism. He wants to spend more time working with a group called Veterans for Peace, demonstrating against America’s seemingly permanent state of war and for things like gun control and, in effect, a return to the country he believed in when he was delivering soda from his father’s step van, the country he fought for in Vietnam.

“My brother John worked right up to the day he died,” Potvin says, shaking his head. “While I’m still healthy, I want to be able to take some time.”