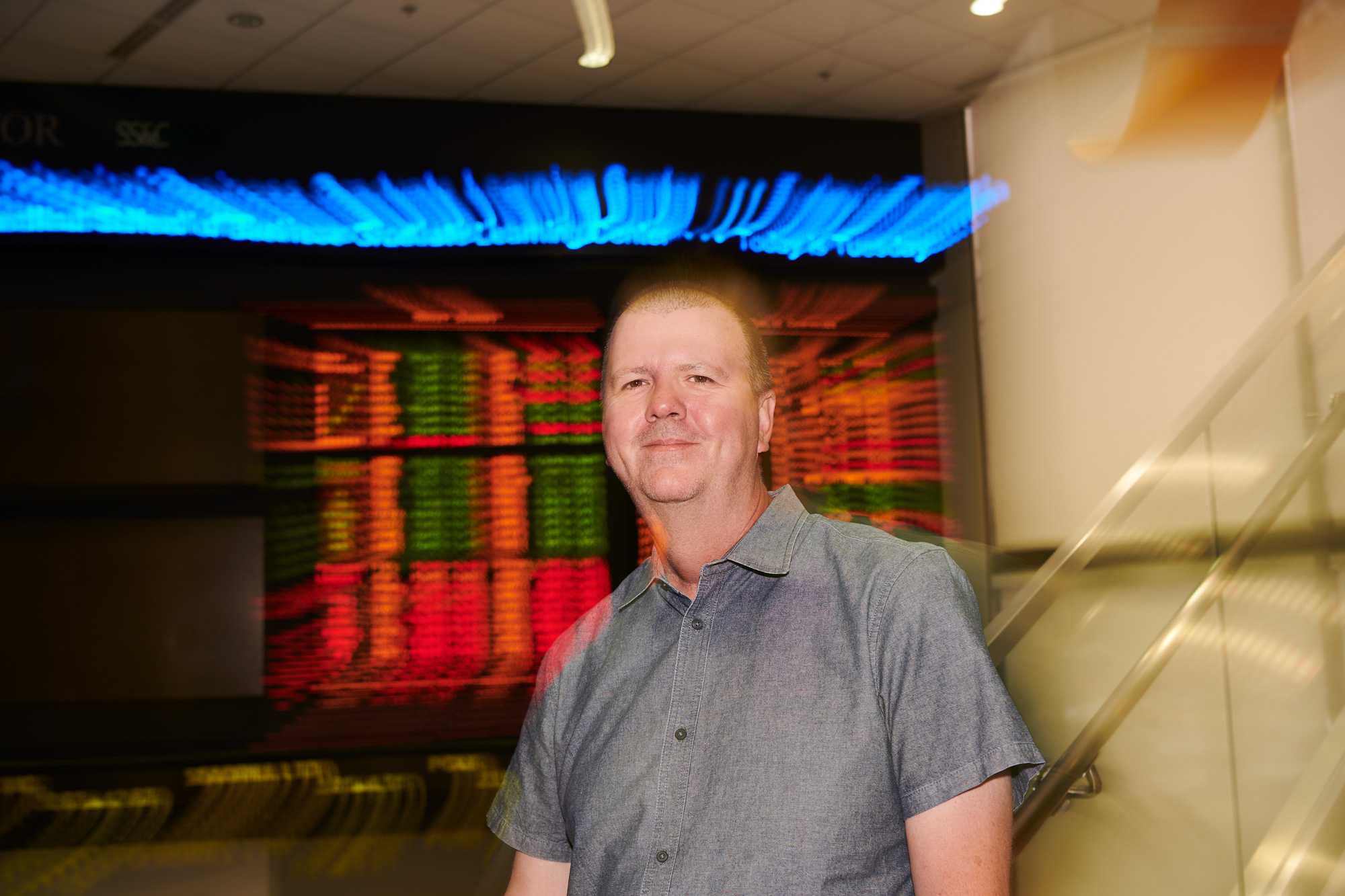 Gilson, at the Graduate Business Learning Center at UConn Hartford, favors newsletters and tickers over textbooks.

Associate professor-in-residence in finance, Paul Gilson grew up in the Thames River town of Gravesend, 20 miles east of London, and earned a degree in mathematics from Bristol University. His plan was always to go on to a Ph.D. “But first,” he says,
“I needed a job.” So he went to work in London for KPMG, the global accounting
giant. His first day at the office, stock markets around the world collapsed in the Black Monday crash of 1987, still the greatest one-day loss by percentage in Dow
history. During the long recovery that followed, KPMG was kept very busy, and Gilson gained extensive experience in mergers and acquisitions, a specialty of his department. “The late 1980s in London,” he says. “It was an exciting time.”

By 1990 he was ready for a change and transferred to KPMG’s Atlanta office for an 18-month assignment. Three years and many IPOs later, he decided to complete his own long-postponed doctorate — in finance instead of math. By then Gilson’s wife Lucy, now associate dean of UConn’s business school, was deep into graduate studies at Georgia Institute of Technology. Gilson looked at “all the fun she was having” and enrolled at Georgia Tech. For his dissertation, he applied game theory to the interactions between entrepreneurs and the venture capitalists who fund them.

“If I’m an investor in Apple, I’m one of millions,” he explains. “It’s very diffuse. But in a start-up business, the shareholder structure is lumpy. You’ve got a founder who has a different opinion than an investor. Coalitions become important. I use game theory to understand those relationships and convert lumpiness to relative strength.”

Gilson is the academic director of the undergraduate finance major and serves as the department’s honors advisor. Since 2016 he also has been a faculty mentor to the Student Managed Fund, the nearly $6 million investment portfolio directed by teams of undergraduate and graduate students. “The SMF,” he proudly notes, “usually outperforms the market.”

A popular undergraduate business school elective, FNCE 4306 examines the roles played by financial institutions in the global economy. In addition to traditional banks and insurance companies, the class looks at the shadow banking system of private capital, such as hedge funds and private equity. Students expand their knowledge of capital markets beyond the stock market, learn the role of money in the economy, and are introduced to new types of investments, such as credit derivatives. These ideas are seen in the context of finacial institutions, with a focus on risk measurement and management.

In group projects, students might act as bond traders who are specifically not investing for the long term, or they might put together portfolios of
cryptocurrencies and then use up-to-the-minute data to estimate how much risk the portfolio contains. “What is market risk?” Gilson asks. “Market risk is how much money you lose if tomorrow’s a bad day, and things go pear shaped. That’s market risk.”

“I don’t like textbooks,” he says. “I tend not to use them.” Instead, he pulls together readings from sources that students will actually use when they go to work — financial industry newsletters, Barron’s, Bloomberg. He also regularly surveys former students for feedback on what they do in their jobs. “I ask them, What skills are useful? What do they wish they had known? And I try to incorporate those insights into my classes. The material is always updating, because we are in a dynamic world.”

The real-world approach, he believes, resonates with the many students who take Financial Services right around the time they’re going into their job searches. “The skills they learn are applicable to many different institutions and jobs in the financial services industry.”

Another classroom winner: funny stories about money. “Students love those,” Gilson says. Like the time he tried to play defense against market turmoil by acquiring options on Intel, then losing track of the expiration date. He wound up with a big chunk of stock he never intended to buy and a nice letter from the SEC saying, “Don’t ever do that again.”

Why We Want to Take It Ourselves:

Home ownership, educational opportunity, and retirement are all affected by monetary policy enacted by the Federal Reserve through the banking system. Understanding how the system operates is as fundamental as knowing the ingredients in our groceries or heeding the warning labels on our medicines.

“What does it mean that right now the yield curve is low across its whole section and is fairly flat?” Gilson asks. “What is that saying about future interest rates? Is there a recession coming? Red lights are flashing. But there’s so much cash around. Fifteen trillion dollars in negative-interest-rate debt. We are in a mad world.”

One way to make some sense of it is to learn the numbers.