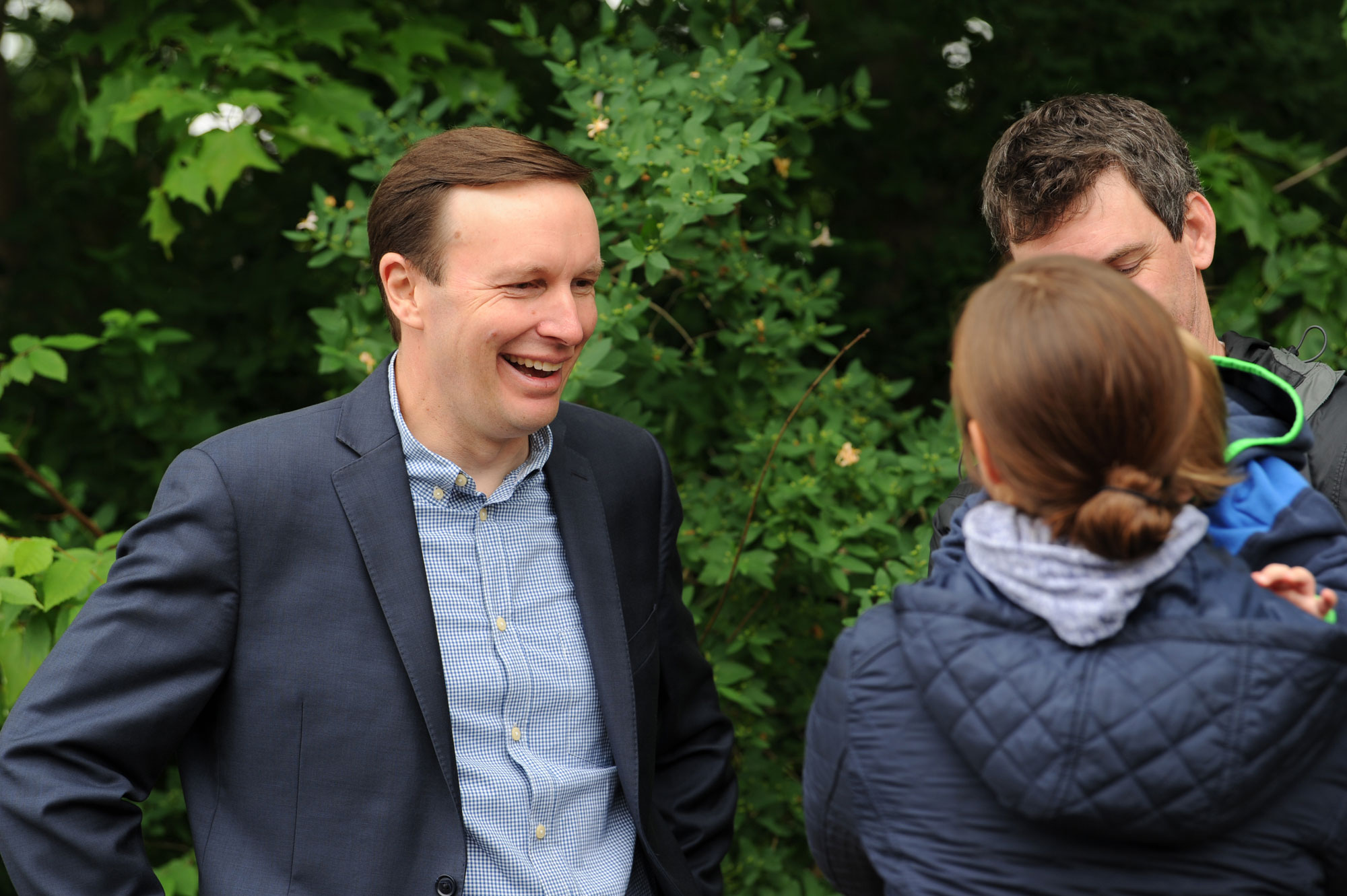 Murphy talks with constituents on the campaign trail.

Outside Senator Chris Murphy’s Washington, D.C. office the cherry blossoms are in full bloom. Inside, the halls are buzzing with colleagues and reporters waiting to speak to Murphy ’01 JD, who has just returned from a trip to Ireland “representing our interests in the Brexit debate, which includes protecting the Northern Ireland peace process.”

Elected to a second six-year term last November, Murphy also served six years in the House and eight in the Connecticut General Assembly. He’s known for dogged work on gun safety, income inequality, access to quality education and health care, and veterans’ rights. He’s also known for his annual summer strolls across the state, 100-plus miles of walking, talking, eating — and posting on Twitter. “It’s become Forrest Gumpish,” he says, “because you can find me if you follow social media, so people come and join. There are times when we literally have a roving town hall.”

Has social media changed the way you legislate?

Though I regularly engage on Twitter, I generally don’t love the fact that we’ve been forced to condense our thoughts and policy proposals into a handful of characters. People get to see the real me on Facebook and Twitter, but there are a lot of times when I start to write a tweet about a complicated topic and then erase it, knowing there’s no way I can do it justice on Twitter. Not everybody has that restraint, so I worry that much of our dialogue is becoming oversimplified.

You say you’ve gotten up every morning since the Sandy Hook massacre committed to working on gun safety. What does that look like?

I work internally as hard as I can, but really my focus is on building up the power of the anti–gun violence movement. I’ve become convinced that we’re probably going to need to win this issue by winning elections. 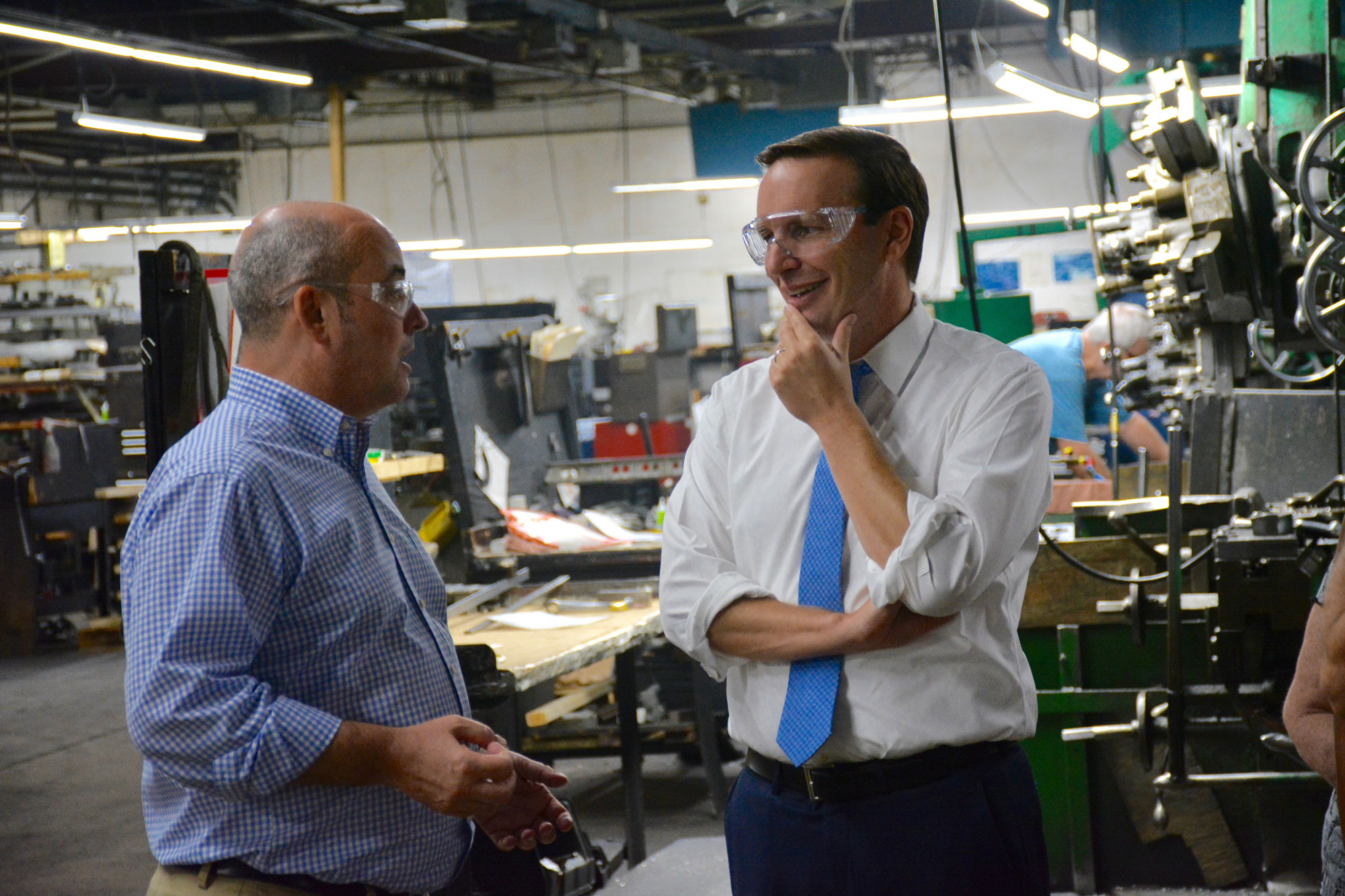 It takes a lot of patience?

Your work to stop gun violence in 2016 led to a 15-hour filibuster, one of the longest in the history of the Senate. What was more daunting about that — the mental or the physical challenge? [The longest was a 24-hour filibuster by Sen. Strom Thurmond who was trying to stop the Civil Rights Act of 1957.]

I think that what was most daunting was getting over the hump to convince myself to just do it. You know in the end the adrenaline was such a constant rush that there was no physical or mental barrier to finishing the 15 hours. I still had a ton of energy when I was done. But at the beginning I was halfway convinced that I would start the filibuster and nobody would care; that I’d be standing up there three hours into it and no one would be paying any attention and there would be no pressure to call a vote on some of the measures that I was talking about. I was really nervous that I was going to be a tree falling in the woods that no one would hear the sound of. But it became apparent a couple hours in that this was serious and this was catching fire and that I was going to have tons of support from other senators.

I stopped because they met our demands. We just wanted debate. Orlando had happened [the Pulse nightclub shooting that killed 50 and injured 53] and the Senate was not going to schedule debates on any anti-gun measures. We wanted to schedule debate and votes on two measures — the universal background checks bill and a closure of the terrorist watch loophole the fact that people on terrorist watch lists are not on the background check lists. At about midnight that evening they agreed to hold those votes and they did hold those votes. And it’s a long story but then after they failed, a group of Republicans and Democrats came together and forged a second compromise, which then came up for another vote and even that failed. But of course our filibuster inspired the House to go forward with a sit-in. So The filibuster ended up consuming Washington for two weeks on an issue that would have been swept under the carpet.

Alex Schachter, one of the students killed at Parkland last year would have been just starting his sophomore year at UConn this fall. Polls show that more than 95% of Americans support stronger gun control measures. What should those Americans be doing to move that stubborn needle?

Where do you see this issue in 10 years?

In ten years, we’ll have universal background checks, a ban on assault weapons and high capacity magazines, and a gun violence rate in this country that is trending significantly downward. I don’t know if that’s five years from now, but I think that’s ten years from now.
It’s a matter of when, not if, we pass these measures at this point.

Yes, and the nice thing is we did it by working with Republicans. We did it in a bipartisan way. 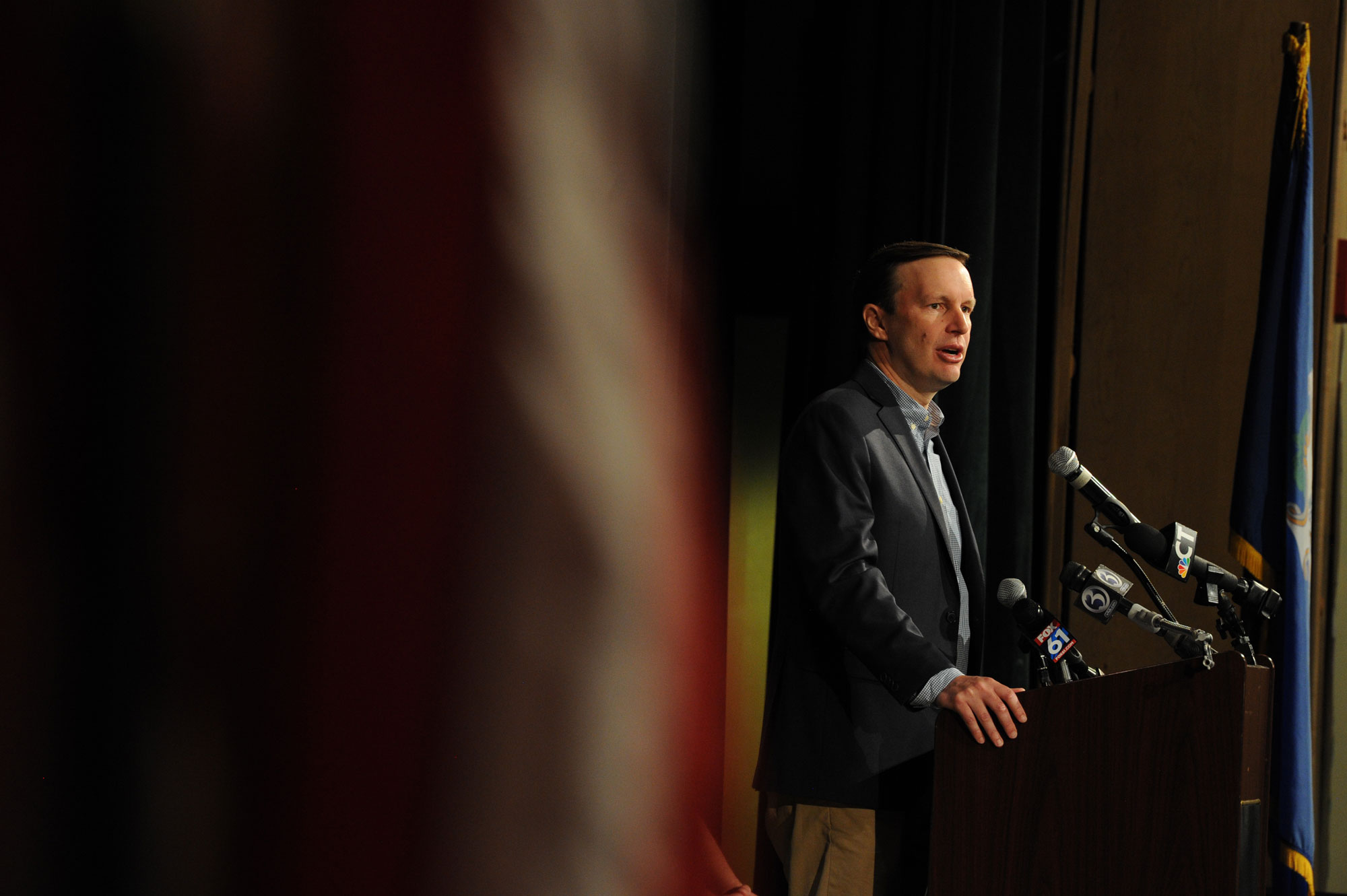 What has UConn Law meant to you and your career?

It was fascinating to go to law school while I was a state legislator. I got to experience law school while I was helping to make laws, so I had this wonderful combination of practical and academic experience. I did a clinic while I was there doing public interest law in cities around urban redevelopment so I got a window into how the law can help transform urban communities and I’ve continued that passion. I championed the north end of Hartford becoming a Promise Zone, which qualifies it for all sorts of increased federal grant money.

You and your wife met as UConn Law students. Is it a meet-cute story?

I don’t even know what that means! We met at a bar in Hartford watching UConn beat Duke for the 1999 national basketball championship. I was a freshman state legislator at the time, so she got a mutual friend to introduce us. She wanted to lobby me on legislation to get loan repayment for students who went to work for legal aid.

That counts as “meet cute.” Did you get it for her?

No, I don’t think it passed.

You both still have student loans. Do you think a decent education could cost less by the time your sons go to college in 7 or 8 years?

If college inflation continues on its current pace, the year that my oldest is a freshman is the year that my undergrad alma mater will hit $100,000 a year. I think the cost of college is an absolute crisis in this country, and my party is often too obsessed with student loans. We’ve got to have strategies to reduce, not just control, the cost of a college degree, or we will bankrupt families and give up our one advantage as an economy, which is the quality of our workforce. 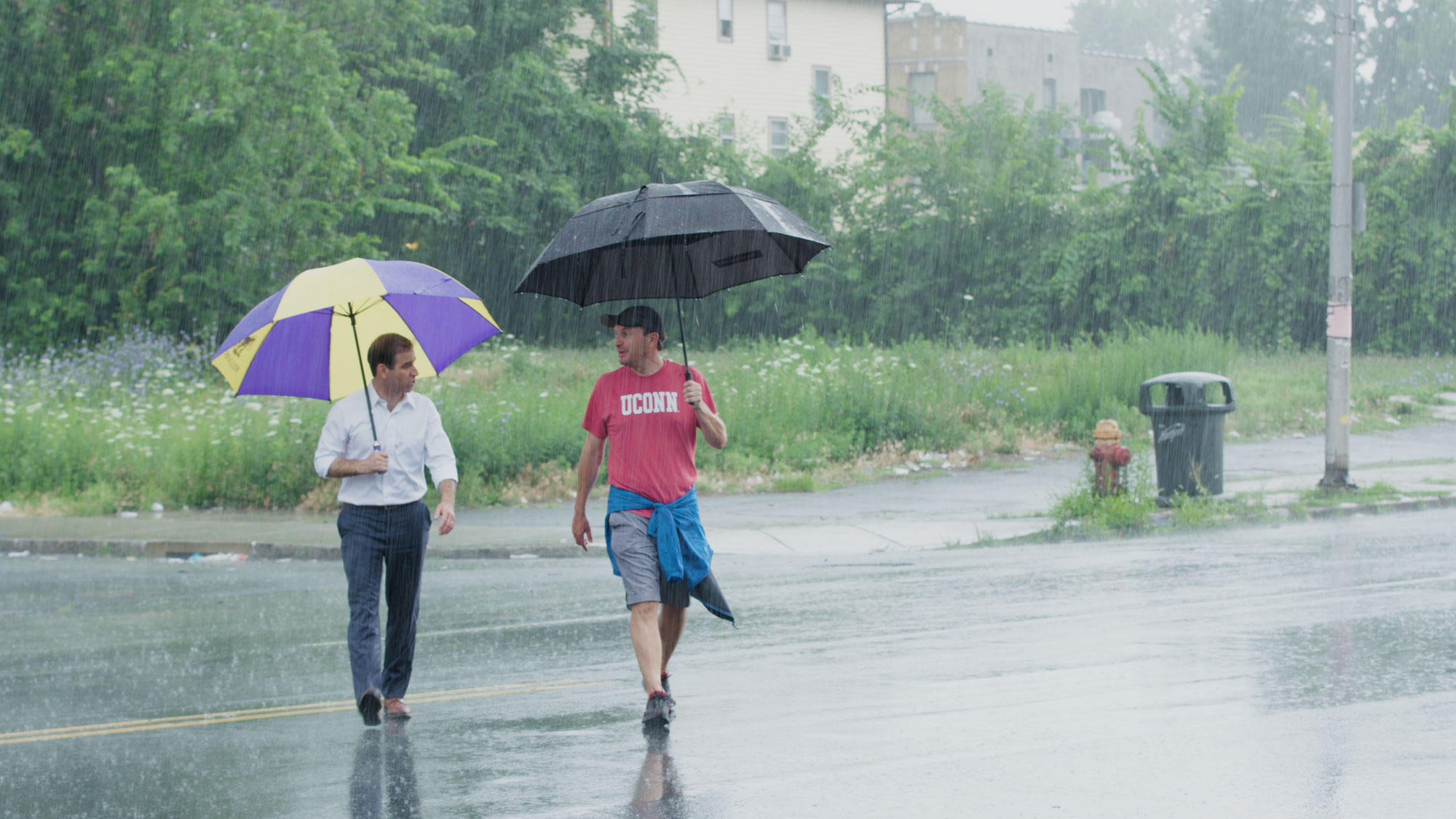 Murphy walks with Hartford Mayor Luke Bronin during his annual Walk Across Connecticut in 2018.

Did you really carry a briefcase, not a backpack, to Wethersfield High?

No! No, I didn’t. I admit it’s not hard to believe, but it was a joke that one of my high school friends played on me talking to a reporter after I first won my seat, and it’s now part of the bio. I mean, I was president of my class, vice president of the debate club, I was a pretty serious student. But I did not carry a briefcase.

When you look at the Betos and Kamalas, do you think that should be you too?

No. I think that there’s really important work to be done here in the Senate. I love this job and I love that we have great candidates running for president. If I thought that the only way I could make a difference was to run for president, I’d consider it. But that’s not the case.

Does anyone else in Congress do walks across their state like you do?

It’s not original. Lawton Childs did it when he was running for office in Florida. Sen. Bill Bradley did it — he would walk the beaches of New Jersey in the summer. So, I didn’t invent it, but I don’t know that there’s anyone else in Congress that does it with the seriousness that I do it.

When you’re feeling particularly frustrated or hitting legislative walls, what successes do you look to as a reminder of the difference you have made and are making?

Well you know I’ve been fortunate to have passed some pretty major legislation while I’ve been in public life. I was a state legislator when I wrote and passed Connecticut’s Stem Cell Investment Act and with that we are saving lives at UConn and Yale. Recently, in Congress I passed legislation that makes a whole new class of veterans with serious illness eligible for benefits. These are veterans with other than honorable discharges who previously were disqualified from mental health services. Now these veterans with PTSD can get those services. That’s undoubtedly saving lives. So, I’ve been fortunate enough to see how laws can change lives and save lives. The vast majority of legislation I undertake hits permanent brick walls. But when you’ve done this long enough to see the handful that actually become law, and you see the way that changes people’s lives, it keeps you coming back for more. 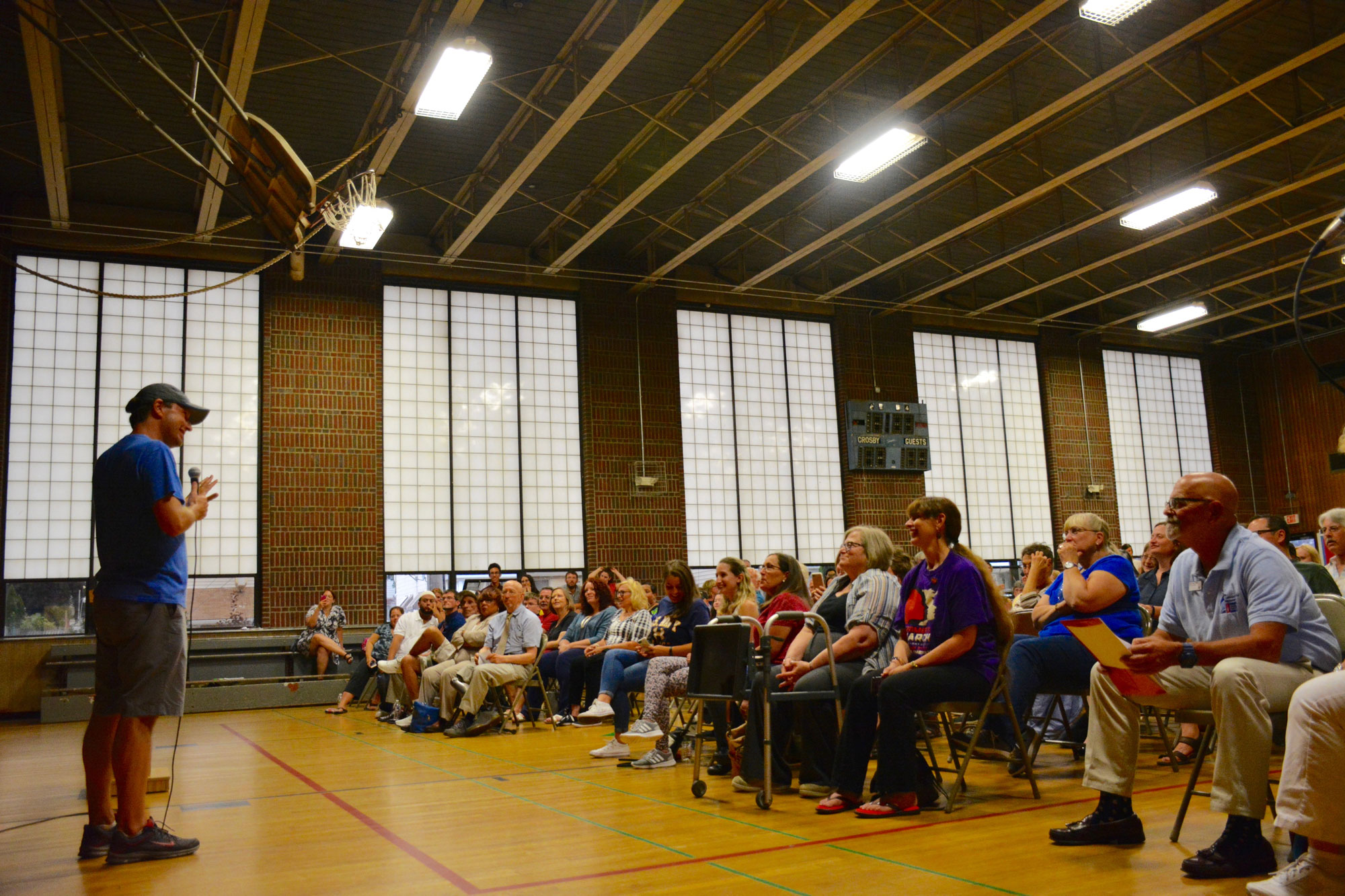 Murphy holds a town hall meeting in Waterbury during his annual Walk Across Connecticut in 2017.

A couple fun ones before we let you go. What’s your favorite game to play with your sons?

My sons have wild imaginations. We play all sorts of make believe games together when I come home from work — all sorts of complicated role playing and make believe. I won’t go into any greater detail about that lest I embarrass myself. We’re not a big board game family, but we do play Monopoly. My sons love Monopoly; they’ll play for hours on end.

A movie worth watching more than once?

What are you reading right now?

“Say Nothing,” about Northern Ireland.