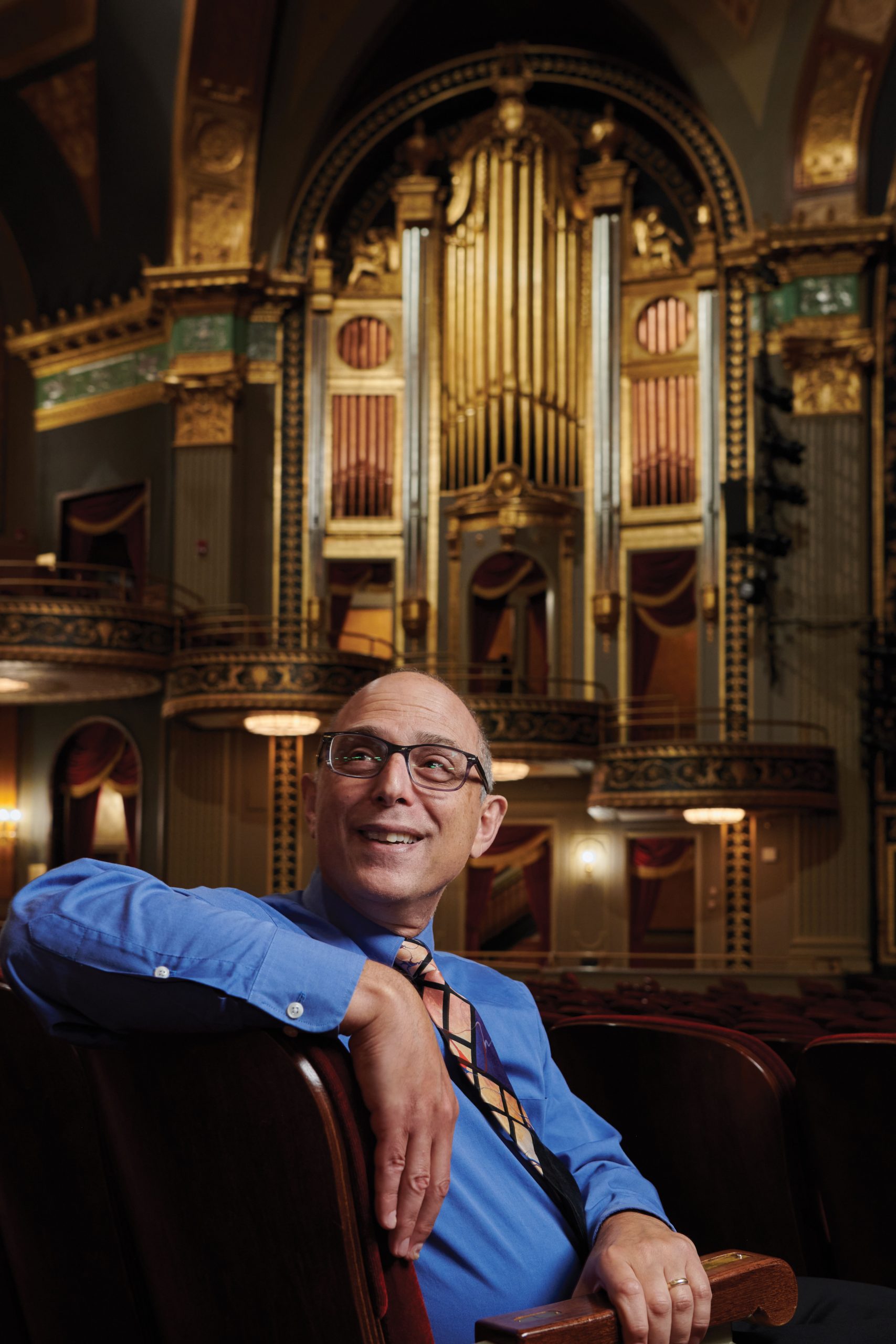 Stuart Brown at the Palace Theater across the street from the UConn Waterbury campus. The 1920s Renaissance Revival–style theater closed in 1984 and, after a stunning restoration, reopened in 2004. Brown has collaborated on many Palace programs.

Stuart Brown, the recently retired director of student services at UConn Waterbury, moonlights as a theater critic, podcaster, and creator/host of the online radio broadcast “Sounds of Broadway,” which boasts 40,000 listeners a month. It’s a global audience that includes a Storrs contingent — the program airs on UConn’s WHUS on Tuesdays at 10 a.m.

The show reflects Brown’s encyclopedic knowledge of the Broadway music catalog, along with his creativity in developing themed set lists that might focus on a composer, a production, a subject, or an individual performer. He also takes requests via email and writes back to his listeners, which he believes is especially important.

“How many times do you email someone, or you go to a website and you fill out a web form? You never hear from them,” Brown says. “You hear from me usually within 24 hours. That engagement to me is so key.”

Listeners rely on this engagement with the craft. Brown plays tracks from long-established, popular productions, but he’s known for seeking out the unexpected, too, such as music from the obscure genre of “industrial musicals,” productions developed and performed by Broadway talent for corporate sales meetings, a staple of the mid- to late 20th century, and short-run productions. “There are some cast albums that just totally bombed,” he says. “A lot of times this is really good music and for whatever reason the show didn’t do well, or it closed quickly or might have done just okay. I like to introduce a lot of that, and I’m always on the lookout for it.”

Tell Me What’s a Happenin’

Brown’s podcast “Broadway Buzz” is a collaboration with UConn Waterbury’s neighboring Palace Theater. When the pandemic shut down stage performances across the nation, it also halted the Palace’s regular radio program. Host Sheree Marcucci, the theater’s marketing and public relations officer, had to consider how to keep the Palace Theater’s audience engaged until performances could resume.

“We decided podcasting was the way to pivot,” Marcucci says. “I suggested Stu as a host because he is a fount of knowledge of the Broadway catalog. He is passionate about his topic and offers listeners lots of backstory information you wouldn’t necessarily know, or be privy to, which gives it a sense of exclusivity.”

Brown’s podcast features music, trivia, anecdotes about theater, and interviews with stage notables. He anticipates it will help the post-pandemic world come back to the theater.

“I’m hoping by people listening to the podcast, listening to the radio station, they’re going to say, ‘Wow, I miss that. I can’t wait to go back so I can be enveloped in that music live,’” Brown says.