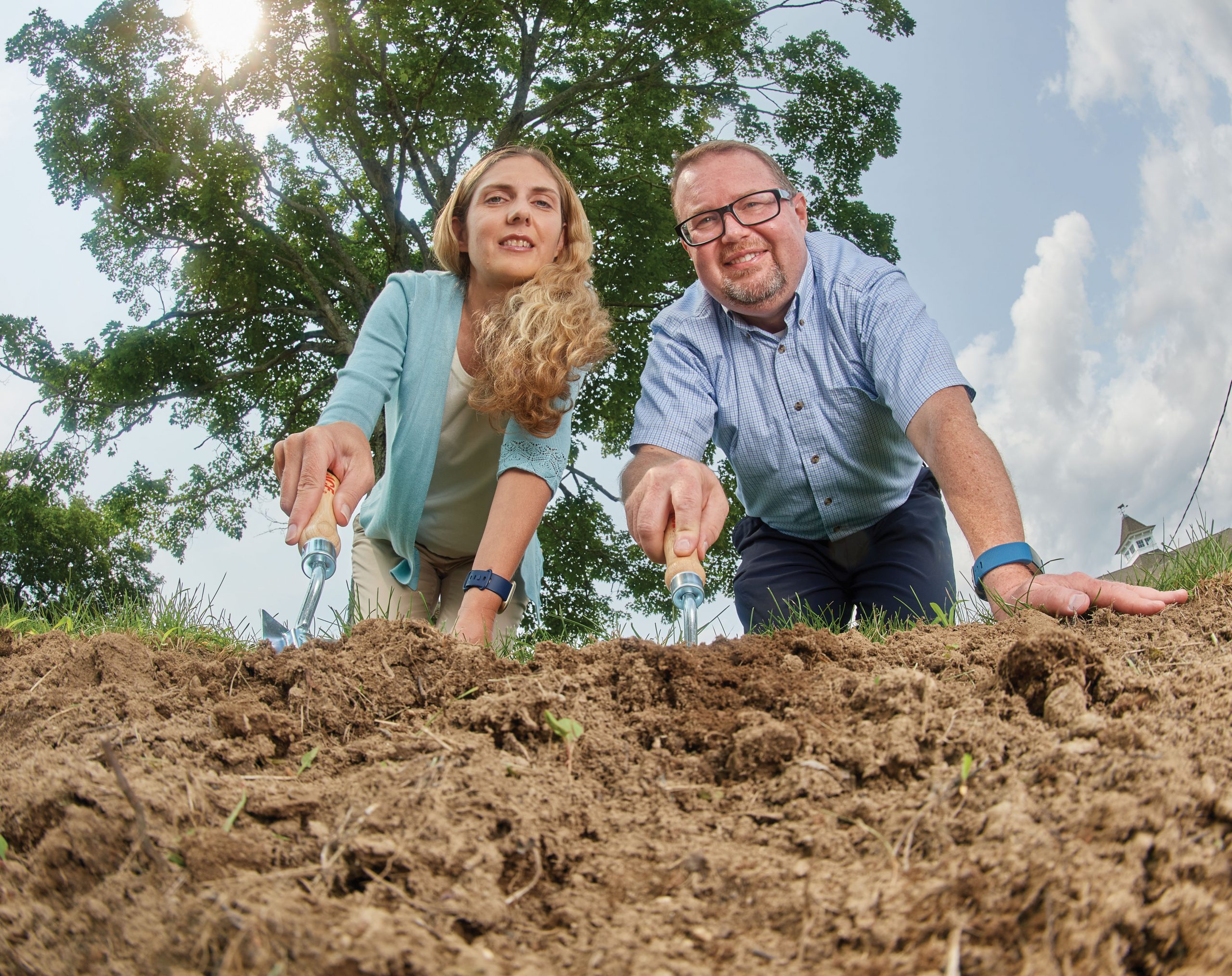 Life teems unseen in both the soil and the sea, waging an endless, hidden biochemical war. Students who take Patricia Rossi and Spencer Nyholm’s “Microbe Hunters” class, however, can witness it firsthand.

The Instructors:
Discovering the microbiological world can transform a person. Nyholm grew up on the ocean in Southern California, fishing for sand dabs and rockfish. He loved inspecting bits of what he caught under his dad’s microscope, and thought he wanted to be a doctor. But some volunteer work cured him of that notion, and it was in a marine biology class that he found his true calling.

Both Rossi’s parents were middle school teachers, and she’d always wanted to follow in their footsteps. Then in college, as a biology/English major who also thought she was on her way to medical school, a microbiology class caught her up in the mystique of the tiny.

“There’s so much stuff you can’t see with the naked eye, yet they impact us so much,” she says. Rossi has a favorite picture she likes to show students of Borrelia burgdorferi, a bacteria with an elegantly spiral form. It causes Lyme disease. Some of the tiny stuff is beautiful. Some is deadly. All of it can amaze.

Class Description:
Microbe Hunters is a gateway class for anyone interested in microbiology or scientific field research. And thanks to Rossi’s collaborations with other institutions, students have the potential of finding the next life-saving antibiotic, too.

Early on in the class, the students are sent out into the world with instructions to collect a soil sample. Most collect samples from the Storrs campus, though some roam farther afield: samples have come from the banks of the Farmington River, from salt marshes in Fairfield County, and from central Connecticut deer poop. Back in the lab, they culture the samples to see what kinds of bacteria they can grow from them. Students use dishes exposed to the air to make sure they don’t accidentally grow some of the known bad boys of the soil, like the Clostridium bacteria that cause botulism and tetanus. Those types of bacteria prefer environments without oxygen.

Instead, the bacteria they find tend to be friendlier types. They characterize the bacteria biochemically, sequence a gene to identify them, test how they behave when grown with chia seeds, yeast, and flies, and add them to colonies of Bacillus subtilis.

That last test is one of the most exciting. B. subtilis is a harmless bacteria that is closely related to the not-so-harmless one that causes anthrax, and more distantly to other disease-causing microorganisms. If the student’s test strain of bacteria can clear itself some space — that is, kill off or prevent B. subtilis from growing near it — it might be producing an antibiotic, potentially one worthy of becoming a medicine.

Rossi sends such promising strains to the Tiny Earth project, a collaboration of universities and institutions dedicated to finding new antibiotics from microorganisms.

Their Teaching Style:
A key part of the course is the Pokémon-style cards students make of their chosen genus of disease-causing bacteria from the ESKAPE list (it stands for Enterococcus, Staphylococcus, Klebsiella, Acinetobacter, Pseudomonas and Enterobacter). Each student creates an image of the bacteria and lists its attributes and powers. They then use the card to teach their fellow students about it.

Nyholm likes to ask questions that force the students to think in a broad way. This is his first time teaching a lab course to undergrads at UConn, and he’s finding it invigorating.

“They get really excited about their discoveries. They have ownership,” he says. He’s also thinking about ways to work some marine microbiology into the course. Although UConn Storrs is landlocked, Connecticut has a lot of coastline, including at UConn Avery Point. Several years ago, a student brought a sample from Farm Creek in Rowayton that grew a vibrant red Vibrio species with definite antibiotic properties, something they’d never seen before. Culturing marine bacteria can be trickier than soil bacteria, but might yield even more interesting surprises.

Rossi has taught the class since 2014 and her enthusiasm for the subject, and the possibilities, keeps growing. She says she’s considering having the students map out all the samples taken through the years and create a time series, showing how the microbial life at each location has changed. That could in turn tell them something about environmental changes. She seizes every opportunity to show students how what they’re doing relates to real life.

Why We Want to Take It Ourselves:
Discovering new life-forms never gets old. As Rossi says, “We find new stuff every year!” Most of the bacteria they sequence isn’t new to science, but sometimes it’s very unusual, and it’s always possible a discovery will lead to a new drug to replenish the world’s diminishing supply of effective antibiotics. In this class, even the most pedestrian of soil bacteria samples are windows into the hidden worlds beneath our feet.