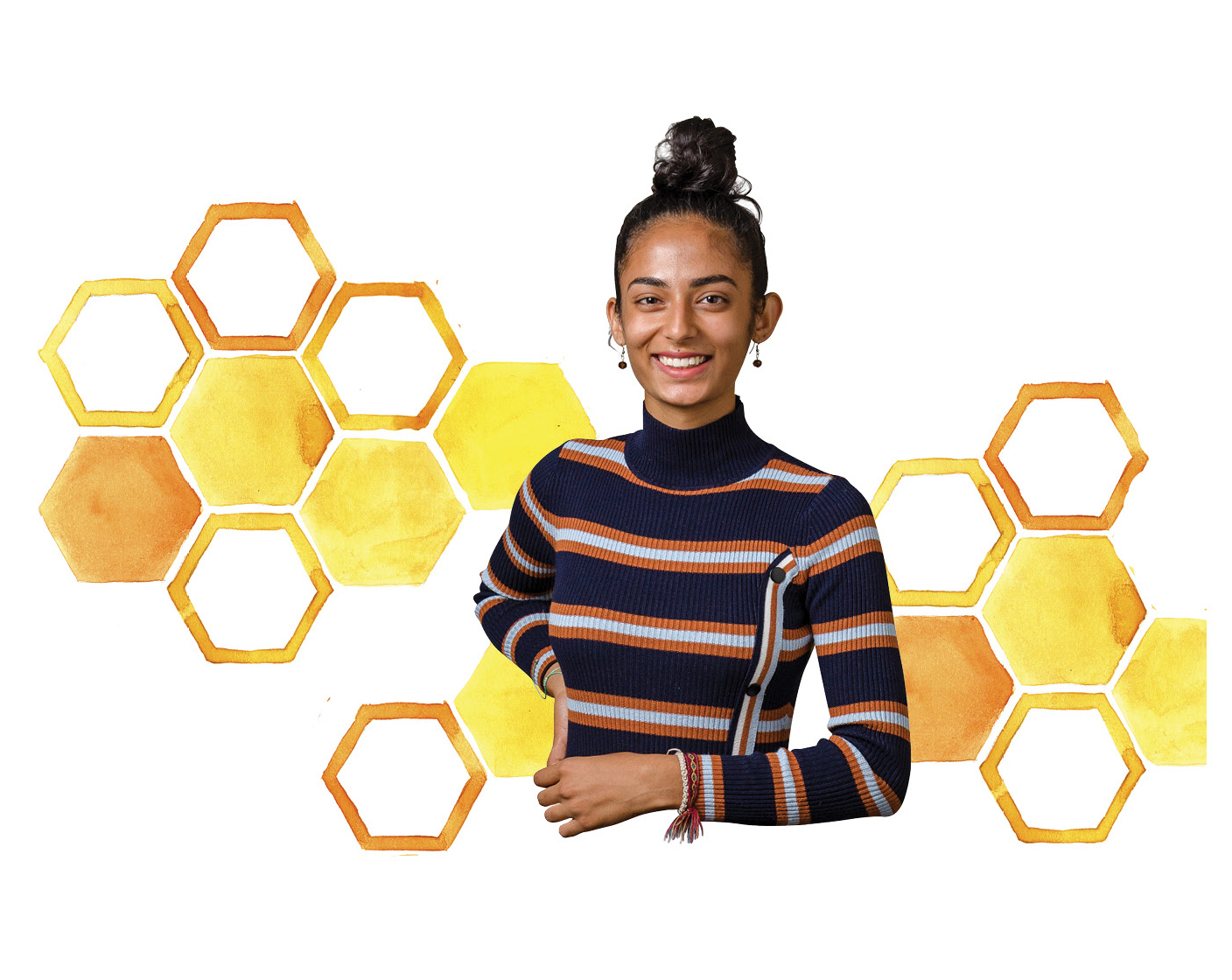 Raina Jain ’24 (ENG) was still in high school when she learned at a science fair lecture who the culprit behind much of the honeybee die-off she had been hearing about for years was. The varroa destructor is a tiny mite that attaches itself to, and feeds off, a honeybee.

“That’s when I decided to take it into my own hands and try to think of a tangible solution to that problem,” she says.

Jain reached out to the lecturer, the University of Maryland’s Samuel Ramsay, and read every research paper on honeybees she could find. She built a prototype of a device that used a gel-like solution relying on a substance called thymol, a naturally occurring pesticide that, at low concentrations, doesn’t hurt the bees, but destroys varroa mites. Her prototype failed —but she was undeterred.

“I still have that gel with me today, because I sometimes just look at that and think, ‘Raina, this whole experiment, this whole company, everything started from that first step,’” she says.

Her successful device, HiveGuard, is in its final testing stage, having recently deployed 100 thymol-depositing hive entryways to beekeepers in California, Florida, and North Carolina.It works by depositing small amounts of thymol onto the bees as they pass through the entryway of the hive hundreds of times a day, slowly building up a concentration of thymol that kills the varroa mites but does not hurt the bees. Jain has 4,000 devices already reserved for when her company begins full-scale production.

A true entrepreneur, Jain started working on the next big thing while perfecting the first one. While studying bees, she learned about their nutritional byproducts and started eating honey and propolis, sometimes called “bee glue,” straight out of the hive mixed with ginger and turmeric.

“I felt instant energy, and became so much more focused,” she says. Finding no similar products on the market, she created one. Queen Bee immune support supplement recently won UConn School of Business’s Innovation Quest (iQ) competition, and Jain plans to use the $15,000 grand prize winnings to sign with a distributor and launch retail sales. She vows to plant a pollinator tree for every bottle sold.

“I am so incredibly passionate about women in STEM making their voices heard,” she says, “especially because I remember when I was going around the country giving presentations on HiveGuard, attending these panel discussions and presentations. I would sit on a three-hour conference call, I’d be the only woman of color, who is 17 years old, and I wouldn’t say a word. I started forcing myself to speak up and say things that were on my mind, and so, slowly, I was able to come out of that and become the person I am today, but that did take a lot of courage and stamina. And I just felt like, just to have a woman standing next to me in that conference call, in that presentation, you just felt different, like you were in it together, almost.”

Werth Institute director David Noble calls Jain one in a million. “Most students have entrepreneurial potential, and it is our job to shine a light on that or open up that aspect of their life,” Noble says. “We spend a lot of time teaching students how to capture value from their potential. Raina is different. She has the eye of the tiger, she has the thing you cannot teach, so you just try to support it — find ways on the margin to help, to make her day a little easier.”

By claire Hall and Jaclyn severance
Photo by Peter Morenus