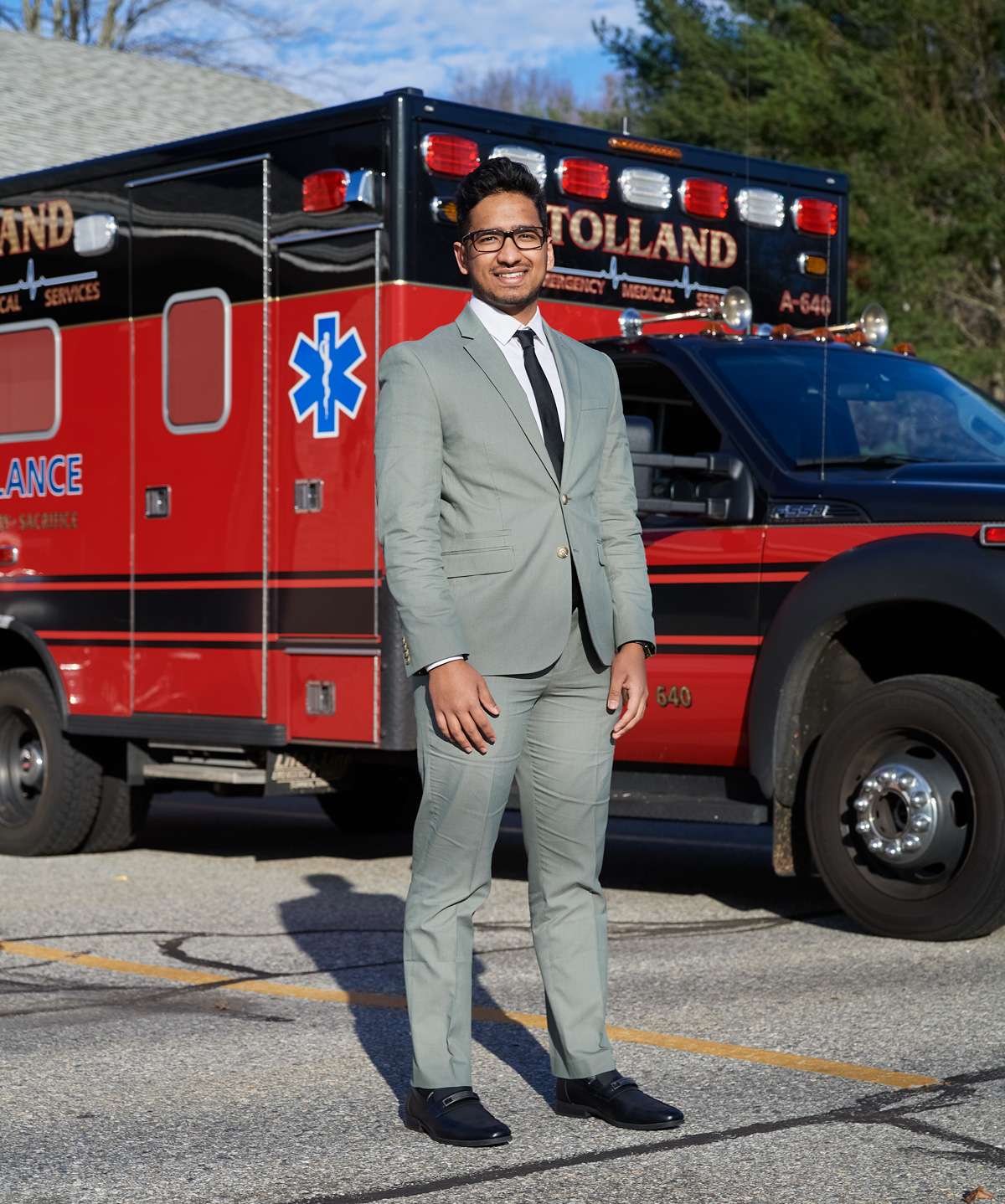 After months of training, Vishal Patel knew he was prepared to care for patients as a member of the Tolland ambulance crew. But when the first call came, a patient with fatigue and chest pain, it was the new EMT’s moment of truth.

“I was really nervous. You go through months of training and shadow work, and I felt confident in my abilities, but that first call is nerve-wracking,’’ says Patel, now a UConn senior. “I had to keep myself focused. I didn’t want to make the patient nervous.’’

During his year of service, he helped with everything from badly sprained ankles to car accidents with trauma. “Tolland has an older population, so many calls are to homes and nursing homes, and occasionally to an accident on the highway,’’ he says.

Patel, a native of South Windsor, is pursuing dual degrees in healthcare management and physiology and neurobiology, with aspirations of attending medical school after he graduates in May. He began working as an EMT in September 2019 but recently resigned to focus on applying to medical school.

“Initially I wanted to see how it felt to be the primary healthcare provider,’’ he said. “I’d had experiences in medical centers in the past, but they’d mostly been backseat experiences. I wanted one-on-one patient interaction. After joining the ambulance, I found meeting people and talking with patients and their families, to be really rewarding.’’

In the past Patel volunteered as a patient escort at Massachusetts General and as an ER nurse assistant at New York-Presbyterian. He has also volunteered with Bethesda Medical Mission, assisting citizens in countries with natural disasters for four years. Patel is the son of Dipti Patel and Dr. Mehendra Patel, who practices internal medicine and is his son’s inspiration.

During a medical mission to Haiti four years ago, they served a village that had no electricity and was inaccessible by road. Some 350 people lined up to receive healthcare.

“It was eye-opening,’’ he says. He helped with triage, took blood pressure, and used his limited knowledge of French to translate symptoms. “It made me feel good about the profession, making an impact and making a difference with your time, effort, and energy,’’ he said.

Patel added the healthcare management major after several semesters at UConn because he ultimately wants to be a decision-maker in healthcare, either running a department or even as the CFO.

He says the Covid-19 pandemic hasn’t deterred him from a career in medicine — in fact just the opposite.

“I think the Covid pandemic strengthened my determination to be a physician,’’ Patel says. “I saw the impact that healthcare providers made and wanted to continue on this path so that I can continue helping people in the future.”

In his spare time, Patel, an Honors student, tutors student-athletes and serves on the funding board for the Undergraduate Student Government. But that isn’t what he is known for among his friends, says Aaron Yao ’21 (BUS), a finance major, who has known Patel since middle school.

“Vishal  has a passion for baking,’’ says Yao. “He always jumps at the opportunity to make delicious desserts for his family and friends, whether it’s a flag-themed cake for July 4th or a coconut cake for a birthday.

“He never ceases to amaze me with his creativity, precision, and craftsmanship when it comes to making cakes and desserts, and is unparalleled in comparison to other baking enthusiasts that I know,’’ he says. “His tiramisu is a personal favorite of mine.

“If his dedication and perfectionist attitude toward baking is any indication of his future capabilities as a medical practitioner, I believe Vishal will find great success in any endeavors he chooses to pursue throughout the course of his career,” says Yao.