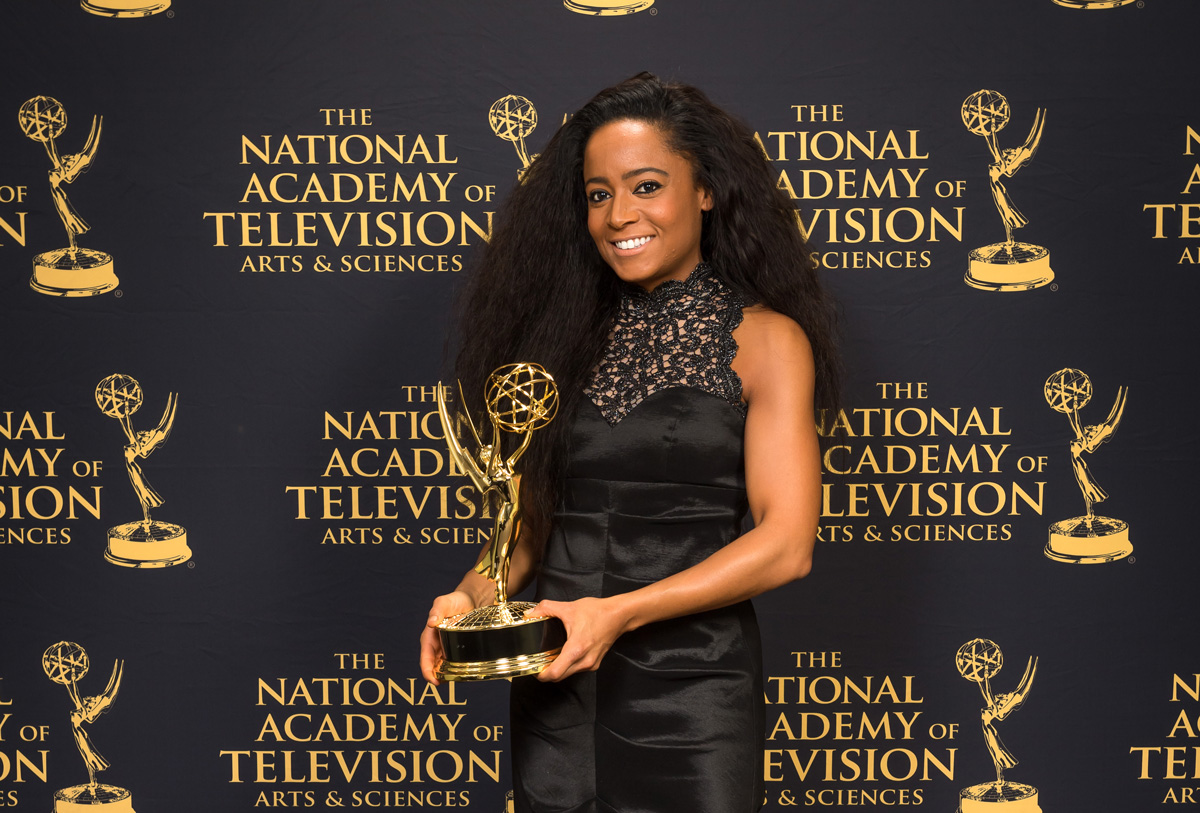 The first time Lauren Stowell ’06 (CLAS) walked into a television production truck, she knew this was how she wanted to make a living.

“It was organized chaos, and you could cut the tension with a knife,” says Stowell, who that day was working as a runner for ESPN during a UConn basketball game when she was a student. That meant she was doing every little odd job the ESPN crew needed during their time in Storrs.

“I remember looking at the producer and the director in front of the board calling camera shots. There were graphics people yelling. It was the most chaotic, but beautiful, orchestra of madness I ever experienced. When I went home, I told my dad, ‘I am not sure what I just experienced, but I want to be doing that.’”

Stowell knew sports at an early age as her father, Bob Stowell ’71 (CLAS), was a football player and then a long-time photographer at Husky events. The younger Stowell graduated with a degree in journalism with a concentration in pathobiology and is now a features producer at ESPN and a five-time Sports Emmy Award winner. Her most recent effort was the highly acclaimed documentary “Tiger Woods: America’s Son,” part of ESPN’s “The Undefeated” brand, which premiered in November.

Stowell worked her way up in the sports communications business, starting in UConn’s Athletic Communications Office as a freshman. She answered the phone, made copies of newspaper clippings, and proofread media guides. Stowell says she also learned how to interact with people at that time.

“I learned how to communicate with the public, with the media, how to be a liaison for the school,” says Stowell, who is quick to credit now-retired Athletic Communications secretary Luanne Dunstan as the person who first prepared and mentored her in the field. “It was a huge opportunity with the level of notoriety the UConn programs were having. The phones were ringing off the hook, people wanted media guides, tickets, licensing was blowing up. It all prepared me for a great career in media.”

Combining that experience with her classroom work, which she says gave her a foundation of style, form, and good writing, Stowell applied to the ESPN production trainee program after graduation and was hired for the competitive seven-month position.

She was hired full-time after that seven-month period and, in 2013, won her first Sports Emmy for the short feature “Drive,” the story of a NASCAR motorsports engineer working for the most successful team in the auto racing circuit, despite having been born without arms.

In 2015, she received an Emmy for the short documentary “No Excuses,” the story of 7-year-old wrestler Isaiah Bird. “Isaiah was born without legs, had a troubled family situation, and his coach became his mentor and took over his child care responsibilities,” says Stowell. “His father was in and out of prison, and he had a teenage mom with other challenges. It was an incredible story of relationship and bond. Isaiah had an incredible spirit and character, and never saw himself as having a disability. That attitude impacted so many people, and that was the story we told.”

Stowell was also one of the producers as ESPN told the story of Purdue University student and super sports fan Tyler Trent, who passed away from bone cancer on New Year’s Day 2019 at age 20. Trent was a source of inspiration around the country for the way he fought the disease and supported his beloved Boilermakers.

“We didn’t even feel worthy of the time we had with Tyler,” says Stowell. “His time was so short. We were with him on the sideline when Purdue beat Ohio State in football. His family allowed us into the experience while he was in hospice care at home. It was an honor to share those moments with him.”

Over the past year, the pandemic and the social justice issues that have gripped the country have made Stowell’s job a challenge. “It’s been a different landscape for storytelling in 2020 for many different reasons,” says Stowell. “It has been logistically challenging, because we are doing interviews remotely. You don’t get that connection you make when you go out in the field and look someone in the eye as they tell their story. There are no hugs or handshakes.

“We are at a time where there is a national sense of reckoning. You are trying to do these stories with Zoom interviews. Normally, you would go into communities and walk the streets. That is a huge part of shaping a story. We have found novel ways to work around it, but it is a challenge as a storyteller.”

And, at her core, that is what Stowell is — a storyteller.

“Incredible people . . . that is the joy about what I do,” says Stowell. “All these stories. We are getting to meet and spend time with people that are inspiring, who are really changing the world. I get to take their experience with me and learn things from them.”