Weighing in on Last Issue

The overwhelming number of letters we received last issue were on the topic of slavery reparations and public policy professor Thomas Craemer’s “new math.” The issue is complex, and, accordingly, so were the comments you sent. I share a few representative letters here, edited for clarity and length, and you can find the rest on our website. We welcome all feedback; the discourse is vital. 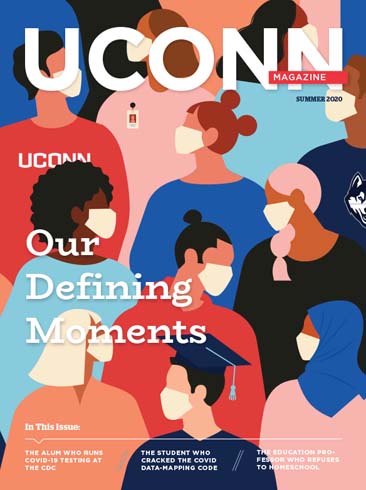 ➼ Thanks for making my day and bringing back such fond memories of my days at UConn during these trying times. Beautifully done! #BleedBlue

➼ My husband is the UConn graduate (1964) in our family, but I am the faithful reader of your magazine, always finding informative and interesting stories. The Summer 2020 issue did not fail me: Flashback to Oct 15, 1969, Student Protest brought tears to my eyes. In 1969 the photographer, student Howard Goldbaum, wrote of the coalition of antiwar and Black Power protests. I ask your readers to research the results of the 1968 Kerner Commission on racial disorder and social division to see some of the roots of today’s BLM movement: “This is our conclusion: Our nation is moving toward two societies, one black, one white — separate and unequal.” The commission’s recommendations are a direct echo of BLM demands for change today. Perhaps your magazine could include a piece about this in your Fall 2020 issue.

➼ This reparations thing is getting to be a bit much. I helped a friend establish the provenance of an ancestor’s Civil War weapons, uniform, and paperwork. That gentleman enlisted in 1864, after the Emancipation Proclamation changed the focus of the war to abolition of slavery. How does the math account for that?

➼ I do not believe that monetary reparations are due. Has anyone counted the cost of LBJ’s programs, made specifically to rebalance Black life. Caucasians and Asians denied a college entrance for the place of another minority? What is the cost of life lost? About 360, 000 Northern soldiers died for that war that did emancipate the Black slaves. Reparations WERE made for the sin of slavery. Why do some say it is not enough?

➼ I concur with Mr. Cote. Having willingly complied with the merits and benefits of affirmative action quotas in hiring and promotion selection during my management career, I, too, feel “reparations” have been paid to many. (I won’t even go down the rabbit hole of who should get them.) Noted Black intellectuals have stated these atonement gestures communicate “if we don’t help you, you can’t make it.” What is more, I will not join the “atonement” bandwagon driven by the BLM-White guilt movement (with untold support from our “institutions of higher learning,” an increasingly unearned title these days). While sympathizers (Dr. Craemer, et al) have reparations (the solution) looking for a justification, the parallels with the Holocaust Jewish population and the Japanese internment cohort are a stretch in the least, taking colonial America out of context for the benefit of a rationale. Slave trade pre-existed colonial America, with White slaves being part of the trade business as much as Blacks, and Black slave owners heavily in the mix of things. The Middle East and Africa, not Europe or the Americas, were in the van. Whether or not one is understanding of the morality and ethical choices of the period —different from ours, of course — it was, unfortunately for our 20-20 hindsight, a business. Blacks, Whites, Moors, Arabs — all practiced slave trade. Today, we reflect and understand slavery was wrong. But to attempt to rewrite history — and correct some fictitious ledger sheet — in light of our current sentiments disrespects history and the story it is charged with telling. What is more, with 80% of Black Americans (according to the Census) experiencing degrees of economic prosperity, the country’s emphasis should continue to be creating opportunity — not handouts — for the 20% … and the millions of White Americans struggling as well. To paraphrase Robert Frost, “My UConn is hard to see.”

➼Maya, this was so powerful. It was well written and heartfelt. Even through the midst of everything, you pushed through to share an eye opening view. Thank you and well done!

➼ How does the math work? For example assuming 6% interest as a constant is erroneous, who will pay the reparations — everyone or just those who were slaveowners? What value will be given for those who fought in the Civil War. Come on now, let’s heal the ancient wounds and move on as a nation.

➼ Thank you for this thought provoking article. I was struck by the dollar reparation estimates to repay for the injustices of slavery and learning that slaveowners were paid reparations. As a Jesuit high school educator, I feel that enlightening each student (and American) with these numbers and historical facts that are, unfortunately, left out of history books, is vital to any form of healing. Thomas Cramer’s walk with Mieciu Langer is surely the best example on how to begin the process.

➼ Maya Moore, thank you for undertaking this interview, and for sharing the circumstances of your life at the time you did it. Best wishes in these turbulent times.

The information and opinions Professor Craemer expressed are sure to raise hackles, as is evident in the discussion. And he points out that the purpose of the calculation, in the trillions of dollars, is for emphasizing the magnitude of the injustice, the unrecompensed labor of generations of enslaved people that built the U.S. economy, rather than demanding those trillions of dollars be repaid in cash, now. As is easily ascertained, that injustice continued long past emancipation and Reconstruction, compounded through convict leasing, Jim Crow, redlining, etc. My family arrived in the United States in the early 20th century and experienced anti-Semitism in various forms here, yet, by the second generation, benefited by the very unequal distribution of benefits to white and African American veterans of WWII. Irish and Italians, immigrants from Europe, were discriminated against initially but gradually and eventually assimilated into whiteness, too, and got a leg up. Black and Brown people have not, despite a few decades of affirmative action (which mostly benefited white women). Despite many years at elite educational institutions, I was not taught the basic facts about American systemic racism, though I was vividly educated when young about the Nazi era, by teachers who were survivors of the camps. It’s crucial that we learn the truth of our history, because it shapes our present and future — the present and future of all of us.

➼ Reparations Math (RM) lacks perspective in failing to credit that most American families of today came here decades after slavery ended. It also fails to credit the huge and terrible price of four of the worst war years in U.S. history. Would professor Craemer feel comfortable visiting an 1865 field hospital to explain to a Union Army corporal, who just lost arms and legs, why his legacy must also include a big reparations debt payable by his descendants some 160 years after the young man already sacrificed so much to end slavery? Slavery reparations indeed! Why not American Indians or Mexico? What would the RM be for much of Mexico, Arizona, Texas, New Mexico and California? Or how about RM for more than 200 years of slaughter and dispossession of Native Americans across the entire nation?

➼ I always read the UConn Magazine full of excitement as a proud alumna and someone who knows how much planning, sweat, and efforts goes into producing it. I admit that I look at all the photos before reading the articles (full disclosure, I am married to magazine photographer Peter Morenus).

I like to challenge myself with Tom's Trivia and see how many of them I can score. However, the answer to the question No. 1 in this issue is .... E:  December 2007 due to the snowstorm. Yep!  UConn hosted somewhat-short-lived commencement ceremonies in December for undergraduates who completed their degrees at the end of the fall semester. How do I know this?  I know this because I was the one who coordinated all commencement ceremonies (and Convocation) from December 2003 until spring 2009.

Back then, there were only two ceremonies for all undergraduates and the capacity in Gampel was being pushed to its limits. In order to alleviate the number of attendees, the administration decided to host a commencement ceremony in December for those who finished at the end of the fall semester; otherwise these students (and their guests) participated in the spring ceremonies. December commencement ceremony was first implemented in 2003, which was also the first commencement ceremony I worked on. Although it was only for the undergraduates, it did not lack any pomp and circumstance. It was held in the Jorgensen Center and astronaut Franklin Chang-Dias was the honorary degree recipient and speaker. Subsequent ceremonies were held in Gampel. There were some concerns for the New England winter, but it did not become a problem until 2007. President Hogan had just started his tenure and it ultimately became his call to make. I was on standby for the call that morning of 16 December, 2007, and the decision came down to cancel the ceremony. Yes, there were people who expressed their concerns for the impending storm and there were people who made a long trip just to attend the ceremony. We could not please everyone and we had to keep the safety of everyone as a top priority. It was also the last December commencement ceremony of UConn, and the subsequent spring commencement ceremonies were decentralized to what we currently have now.

Regarding “Staying In College to Help Others Graduate,” Fall 2017

➼ Well done! Glad to know that the University is doing something to improve the graduation rates for black males. Is there such a program for black females? I went to UConn in the ’70s and my son also graduated from UConn and there were no academic programs to support Black students. Your work is gratifying and you appear passionate about what you are doing. We fully support you and wish you all the best.

➼ Lying in bed waiting for five o’clock to arrive, Bluetooth-listening to an interview on NPR with professor Manisha Sinha. My wife, a very light sleeper, reached over with her arm. She can tell from my breathing that I am awake. As often happens when I get up, turn on the coffee machine to do its loud heat-rinse-grind procedure, I get on the web to look up something I learned during the night. This time it was Sinha’s NPR interview, her website, and some of her articles. Very impressed. Thank you, Professor Sinha.

Peter Charak, via our website
Editors Note: Please see an essay by Manisha Sinha on the topic of Confederate statues in this current issue

➼ As the father of a UConn alum (Andrew Muro ENG ’05), I always read UConn Magazine. The story in the Spring, 2018, issue re: A.I. was great but had a somewhat significant omission in regard to Hollywood robots through the cinematic ages. The writer, while capturing most of the great sci-fi robot heroes and villains, neglected to mention the inter-galactic policeman Gort who appeared in the classic “The Day the Earth Stood Still” movie, which was released in 1951. No collection of 1950s sci-fi or any other era can be considered complete without mentioning Gort, the real hero of the movie.