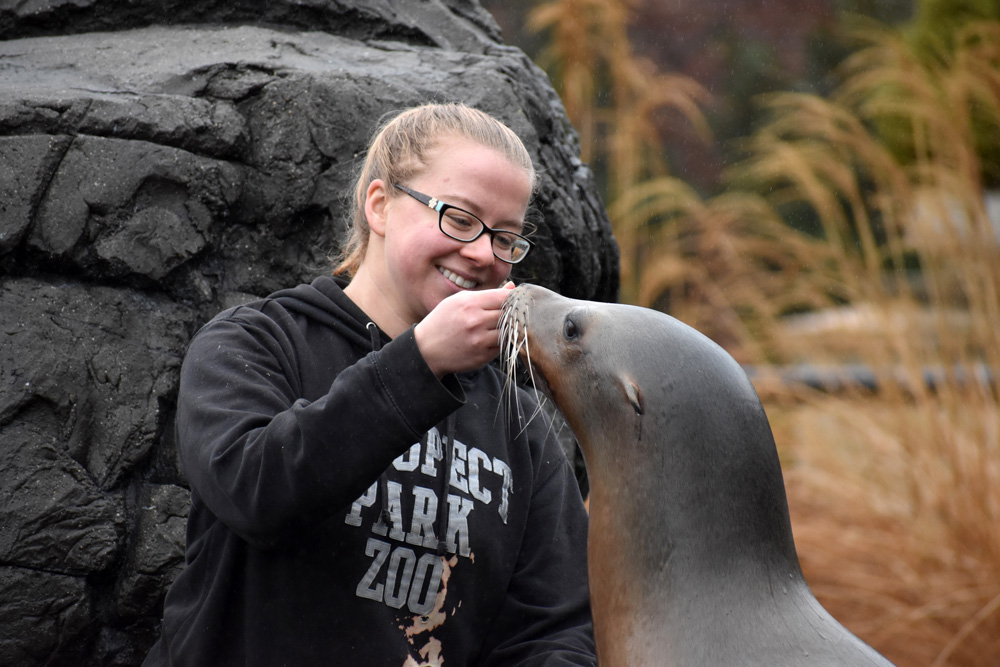 Kimberly Grendzinski ’16 (CAHNR) begins every workday at NYC’s Central Park Zoo by lugging bucket after bucket of fish, some 100 pounds, up two flights of stairs. Waiting at the top of the stairs is a hungry mob of heckling penguins, who crowd her the moment she starts tossing herring. As they try to snap the prizes right out of her hands, they often pinch her forearms and leave a trail of bruises. “The penguins can be jerks, though lovable jerks,” she says, admitting to stealing time from the black-and-whites to train the seals and sea lions, whose smarts make them her favorite species.

Since graduating with an animal science degree, Grendzinski, 26, has worked at Brooklyn’s Prospect Park Zoo and now at Manhattan’s Central Park Zoo, with its melee of penguins, puffins, and seals. After working with UConn’s many domestic animals, she found her calling with exotics during a summer internship at Bridgeport’s Beardsley Zoo, where she dug up rocks to build a new exhibit and trained a bison.

“I was coming home every day smelling awful, and I was like, ‘This is what I want to do.’”

Zookeeping is demanding, physical work, but it is also intellectually challenging, which she loves. Zookeepers keep a watchful eye on their animals because the smallest behavior changes could signal a health problem. For Grendzinski, that means tracking 74 penguins in a nearly 100-foot-long pool.

“It’s like I have a catalogue in my head,” she says. “Zookeeping takes a lot more mental focus than most people think. It’s not playing with animals all day.

Zookeeping also takes a lot of nerve. Grendzinski readily admits to being uncomfortable with reptiles and, especially, bats. To face her fears, she worked with those species whenever she could. She would volunteer to help catch the bats at the Prospect Zoo. Once caught, they clung to her gloved hand.

“I tried not to think about it in the moment,” she says. “That’s a lot of zookeeping, stopping yourself from thinking too much so you don’t psych yourself out.”

Growing up in Oakville, Grendzinski discovered her love of animals not with exotics but amid the barns of the Bethlehem Fair, which she visited each summer with her grandfather. The pair would arrive around 10 a.m. and stay until late in the evening as they munched fried food and guessed who would win the oxen-pull. By high school Grendzinski saw nothing but animals in her future. She also dreamed of going away to college, but her mother limited her to schools within a three-hour drive from home. That made UConn an obvious choice, given its animal science major plus its cows, sheep, chickens, horses and pigs. 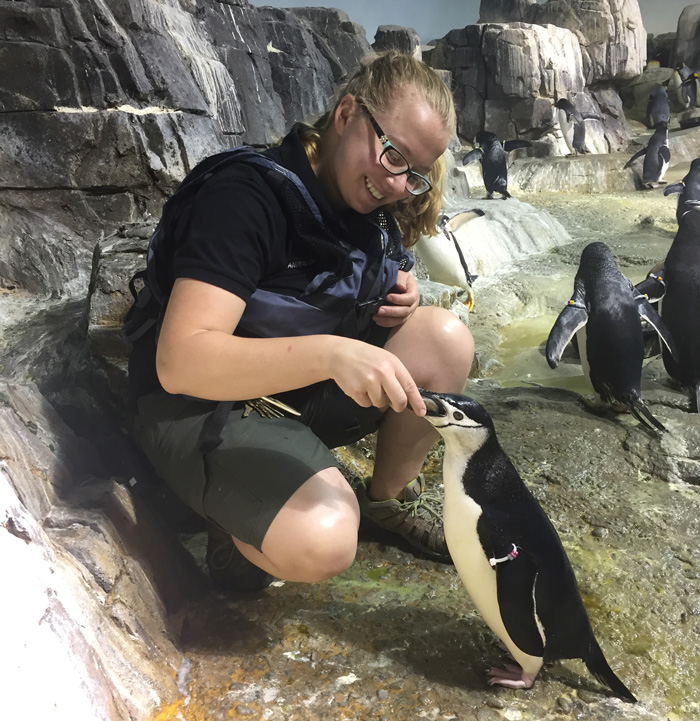 “When I visited there I saw how students worked with animals all day,” she says. “That sealed the deal for me.”

At UConn, she loved milking the school’s sizable herd of Jersey and Holstein cows each evening at 7 p.m. She learned how to fit the milking machine nozzles on their soft teats and how to calm down cranky cows by talking softly to them. Milking wrapped up around 11 p.m., but if a cow was close to calving Grendzinski might stick around until 2 or 3 a.m.

“I obviously wasn’t much of a party girl at UConn.”

As a first-year animal science student, Grendzinski also had to learn to show livestock. That’s how she met Chad the chicken. She was, she says, surprised by how “rude chickens can be,” including Chad, who tried to peck her the first time they met. “Most animals when they are rough with you, you are like, ‘You got some fire in you. I like it,’” she says.

That attitude may explain her ambivalent relationship with the penguins. The Central Park Zoo, at the park’s southeastern corner, has four types: Macaronis with their showgirl-like headdresses of yellow feathers; Chinstraps, the smallest of the bunch; Gentoos with their orange beaks; and Kings, the second tallest of all penguins. The Kings come up to her waist, which unnerved her at first but they have become her favorites because they are so comical. The Chinstraps she’s still getting used to.
“They have this kind of Jack Russell-Napoleon complex going on,” she says.

Though most of her day is spent ferrying fish to the penguins, she steals some time to train the seals and the sea lions, her favorite species because they are so smart. Grendzinski thinks she might eventually like to work only with marine mammals, maybe rehabilitating wild ones. To that end she is working on a master’s in biology with a focus on marine conservation at Miami University in Ohio. For now, she’ll continue with her somewhat incongruous life of spending her days amidst penguins in the heart one of the planet’s biggest and most sophisticated cities. After work, she strolls down 5th Ave. to the subway station and takes the train home to Queens reeking of fish.

Yes, she admits, people have understandably moved away from her to find new seats on the subway. “I’m pretty used to this, though. Even at UConn people would switch seats on the bus if I got on after a shift in the barns.”

By Amy Sutherland
Photos by Courtesy of Kimberly Grendzinski