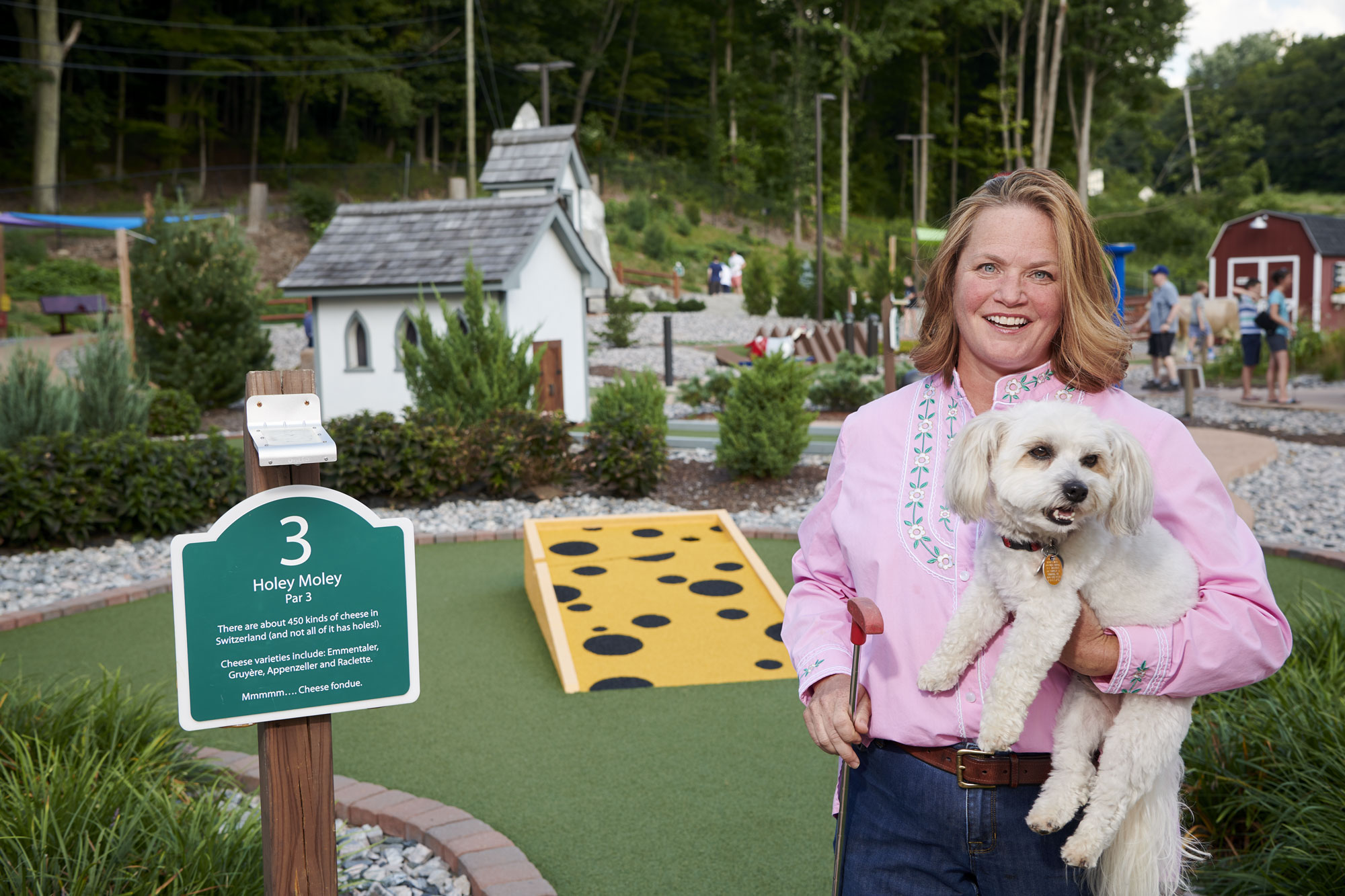 If you happen to be driving through the junction of Routes 44 and 202 in Canton, Connecticut, between April and November, you might want to tap the brakes and give a yodel or two as you pass the Matterhorn Mini Golf Course. Better still, pull in and say hi to Autumn (Backman) Sutherland ’91 (CLAS). She owns the place and if you tell her you’re a UConn grad, she might even introduce you to her dog — a Coton de Tulear, named Mulligan — while sharing some secrets about the course she designed.

This Swiss-themed family attraction has received glowing reviews since its opening in 2015. It was named one of the top ten miniature golf courses in America by USA Today in 2016, the 100th anniversary of the founding of miniature golf, and one of Yankee Magazine’s Editor’s Choices for Connecticut attractions in 2017.

With a sense of whimsy and attention to every detail, the Matterhorn’s tricky yet fun holes are accompanied by informational signs covering everything from the history of Swiss banking to the number of cows in the country (1.5 million). There’s even one named “Atom Blaster” designed to evoke images of the Hadron Collider — the research facility where physicists test their theories of particle physics. And there are Swiss goats — each fiberglass nanny brightly painted by local artists and schoolchildren — to draw players’ attention as they move from hole to hole.

How did Sutherland get to be the proprietor of this little bit of Switzerland in the Farmington River Valley? Well, the story isn’t just about golf and it definitely isn’t linear. In fact, it’s the twists and turns and opportunities snatched from unlikely places that make it really fun.

To begin, this Canton native was a bundle of energy from day one. So much so, she says, that when she turned 14 and wanted to go to Europe for the summer (for the first time ever, and alone) her mom said, “OK, go ahead. Just be careful.”

She went. She was careful. And she fell in love with travel.

Fast forward a few years to when she landed at UConn as a freshman with an individualized major, an insatiable thirst for knowledge, and no fear of 8 a.m. classes. “I received a true liberal arts education because I took a little of everything from physics to graduate seminars to two years of military science,” she says. “I couldn’t believe I had all this freedom to study anything I wanted to.”

When a mysterious scheduling blip in her final semester assigned her to an acting class in the School of Fine Arts, Sutherland embraced the opportunity. Much to her surprise, she exuded natural acting ability. So much so that the instructor encouraged her to further her education in a summer theater program at Yale and wrote her a glowing letter of recommendation.

So what does an “accidental actress” do? In Sutherland’s case, after Yale she packed up and headed to New York City. There, in addition to the mandated temping most budding actors endure, she appeared in off-Broadway musicals and on network television soap operas.

But the travel bug was stronger than the acting bug and once more Sutherland set off to Europe. Monte Carlo seemed like an interesting landing spot and, with no contacts and only a basic grasp of French, she set about looking for a job.  When someone suggested she’d be a natural as an au pair, her immediate response was, “What’s that?”

The suggestion proved to be a good one, though, and she soon landed the first of what would be a series of positions as a governess to children of the rich and famous. Those gigs would take her all over the world for much of the next 18 years — from Manhattan and the Hamptons to Monaco and the French Riviera.

“I grew from being younger than the parents I worked for, to their age, to being older than them. As much as I loved working with kids, it got harder for me to get up off the floor after playing with them,” she laughs.  “Plus, I knew there were other things I wanted to do and when this piece of property came up for sale I just knew I had to buy it.”

Formerly the site of an antiques shop called the Cob Web, for years a well-known landmark in the Valley, the property had fallen into a state of complete disrepair. But, with the idea of a constructing her own mini golf course in mind, Sutherland set about thoroughly researching what it would take to make her dream a reality.  She headed to Orlando, Florida — a mini golf mecca — where she met with a course builder. In addition, in the span of two days, she teed off on 276 holes (she counted) in order to find out what made some memorable for the right reasons and what made others forgettable.

She absorbed all other aspects of course design as well, including signage, lighting, placement of water hazards, and tee boxes. “I didn’t take notes,” she says, “because my brain is smarter than I am, so I let it be exposed to all different types of courses until I came up with my own design.”

But, this still begs the question, “Why golf?”

“I can never explain exactly where my ideas come from,” Sutherland says, “but our culture tends to put people on super highways and the focus is almost always on staying on track toward a single goal. I prefer to take the byways, to keep all my options open, and to go where my brain tells me to go. In this case, I heard ‘miniature golf,’ and here I am, feeling right at home.”