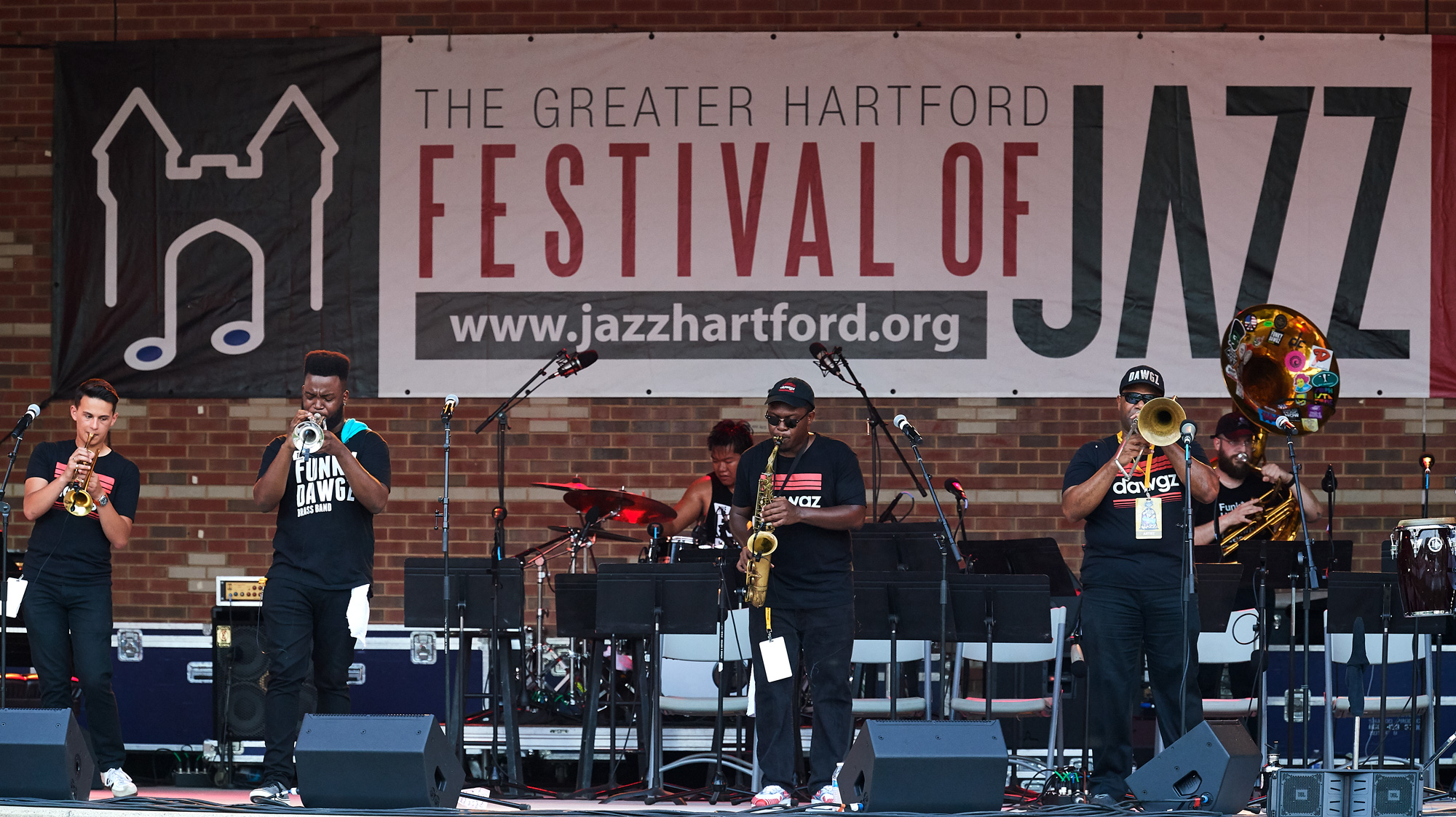 From a European tour to Madison Square Garden, the Funky Dawgz Brass Band is on a serious roll. And it all started as a one-credit class at UConn.

“I traveled with the pep band to New Orleans for the women’s basketball championship in 2004 and saw these brass bands on the street,” says Marvin McNeill ’97 MM, then assistant director for the UConn marching band. “I was inspired. Maybe one day we could start that up here.” No wonder he felt optimistic — UConn defeated Tennessee for the title that week.

“Only years later did we have the right group of students in the marching band that I thought could pull it off. I sent them an email, described the idea for the brass band, and sent links to some YouTube videos,” says McNeill, now trombonist for the Funky Dawgz and the only member outside the Millennial generation. “Plus, I came up with the name,” he adds, “even the z.”

The Dawgz started practicing weekly, as a one-credit class. Tenor saxophonist Tommy Weeks ’13 (SFA) remembers their first show at von der Mehden recital hall on campus. The crowd loved it, jumping out of their seats and dancing. “Our first show off campus was at the Arch Street Tavern in Hartford,” says Weeks. “Soon after that, we played Pub 32 and the place was so packed they couldn’t let people in.” That was when they knew they had something special.

“Band instruments can be cool! You don’t have to play the traditional music. It’s a way to take what we’ve learned and inspire other students to pick up instruments, younger students who are just starting out.” —Colin Walters ’14 (SFA)

Then things really started to escalate: Two videos went semi-viral: a February 2014 cover of Beyoncé’s “Crazy in Love” and “Get Lucky” by Daft Punk and Pharrell Williams and an April 2015 cover of “Uptown Funk!” by Bruno Mars. Between those, a debut album “No. 1” came out in August 2014. Then the band backed Dispatch during a sold-out July 2015 concert at Madison Square Garden. “That was the single most memorable experience of my life,” says Weeks, “not just with the band.”

In March 2017, Funky Dawgz played Florida’s Okeechobee Music and Arts Festival, which attracted such major acts that year as Usher and The Roots. Their sophomore album “Place 2 Be” was released in September 2017. And a 2018 European tour took them to England, Ireland, and Spain.

Through all the upward momentum, they never became set in their ways — including when it came to membership.

When trombone and sousaphone player Mike Marsters ’16 (SFA) saw the Dawgz at an ice cream social on campus, he approached McNeill and asked to join. “Absolutely,” said the frontman.

“I was only a freshman at the time,” says Marsters, “performing with all these juniors, seniors, and even a professor. People would ask how I joined the band — because I asked!”

The band topped out at 10 members, but is down to a core of six or seven since the student members all graduated around the mid-2010s. The biggest challenge now is coordinating rehearsals with members in every corner of Connecticut instead of all on campus. 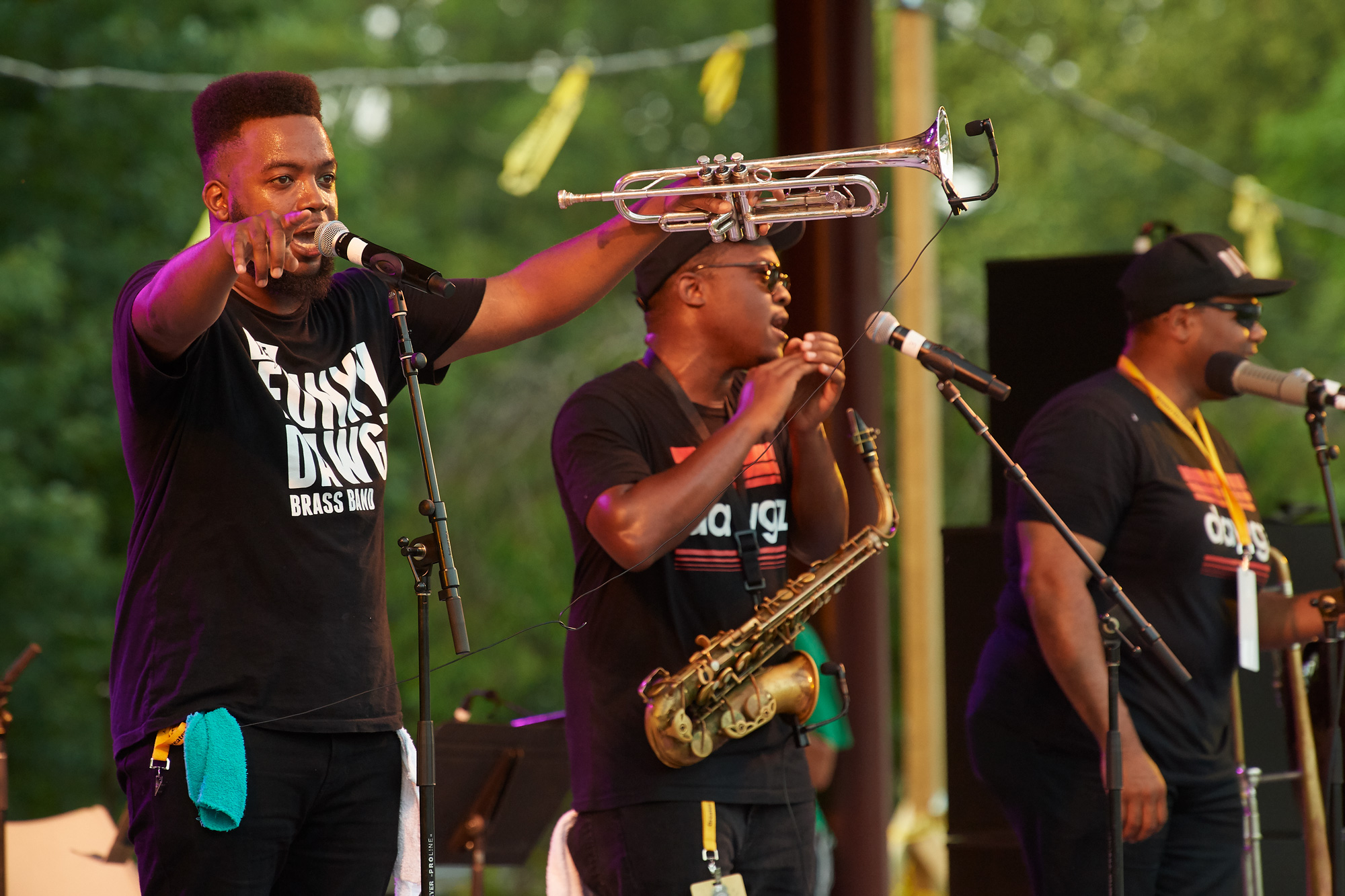 They get together for more than just practices. Funky Dawgz Brass Brand Camp, created with the nonprofit Spread Music Now, is an after-school and summer program that provides instruments and music instruction for Hartford elementary and high school students who might not otherwise be able to afford them.

“Band instruments can be cool! You don’t necessarily have to play the traditional music,” says alto saxophonist Colin Walters ’14 (SFA). “It’s a way to take what we’ve learned and inspire other students to pick up instruments.”

It all culminates with a public performance, usually at the Hartford Public Library event space’s concert series. Recent songs at their public performances have included the Mardi Gras staples “Iko Iko” and “When the Saints Go Marching In,” but also “Havana” by Camila Cabello, last year’s #1-charting song that features Caribbean-style brass.“We’ve also helped the kids write their own songs,” says McNeill. “One’s called ‘Charter Oak Groove’ and another is called ‘Go Bananas.’”

Anne D’Alleva, dean of UConn’s School of Fine Arts, greenlit a plan to expand the program with the University’s help in 2016. UConn Marching Band members give Hartford students in-school tutoring, and free meals are sent down from UConn Storrs.
McNeill talks about giving one student a trombone. “He said the program really sparked his interest to continue playing. Now he’s the top trombone player at his school and was invited to the Litchfield Jazz Camp.”

Where do they go from here?

“The end goal is to become full-time professional touring musicians,” says drummer Jon Singngam ’13 (CLAS), noting they each hold day jobs at the moment. “There’s a big bus somewhere with our name on the side.”

“After college, most college bands grow apart,” says Marsters, but since UConn, “we’ve only grown closer.”