She Is Not Throwing Away Her Shot

When Alexandra Eckhardt ’11 (ED, SFA) was in elementary school her dad taught her to play Earth, Wind & Fire tunes on a four-string, junior-sized electric bass. He also taught her the acoustic bass because she loved low-noted instruments — but even the mini version was a stretch.

“I was this little girl playing this massive instrument,” she says. “Even now if I try to play the bass of some six-foot-tall guy my fingers don’t stretch far enough.”

Music is the family’s business (both her parents teach and play) so Eckhardt’s life naturally revolved around music. In high school she joined chorus, band, and orchestra, and then did the same at UConn. Though she chose UConn because she didn’t want to be cloistered in a music conservatory and wanted a more rounded education, she draws a blank when asked what classes she liked outside of music. “Uh, well it wasn’t math,” she says. What she clearly does remember is studying with Errol MacDonald, who heads the jazz department, and jazz bassist Kenny Davis. “Those two guys playing-wise were the dudes for me.”

Though it had never occurred to her to be anything else other than a musician, once Eckhardt had her diploma in jazz studies and music education, she was unsure of how to launch her career. So the newly minted college graduate moved back to her parents’ house in Fairfield, Connecticut, for the summer to ponder her next move. She signed on to play in the band for an elementary school production of the Broadway acorn “Bye, Bye, Birdie” in Chappaqua, New York, for a couple of days. It was no career move, but it was a job.

That show’s music director told her of an audition for the touring production of the Broadway musical “In the Heights,” which was created by the team who would go on to produce the mega-hit “Hamilton.” Eckhardt had not yet heard of “In the Heights,” but she auditioned, got the job, packed her suitcase, and quickly learned to play salsa. She spent the next nine months criss-crossing the country with the production, stopping for one-night shows in San Antonio, Des Moines, Fort Lauderdale, and the like. Along the way she launched her career. Suddenly she was a professional musician.

When that tour ended the bassist joined the first national tour of “The Book of Mormon,” the mega Broadway hit created by the writers of the irreverent animated TV series “South Park.” She learned to play fretless bass, which remains her favorite style. The cast and band flew to major cities, where they had multi-week runs. They were fêted with parties at each stop. But life on the road – 8 shows a week, little vacation, living in a hotel room – was still grueling, even for a 20-something.

“The traveling is cool but you get to wanting to be in one place,” she says. “I was ready to start my career in New York if I could.” 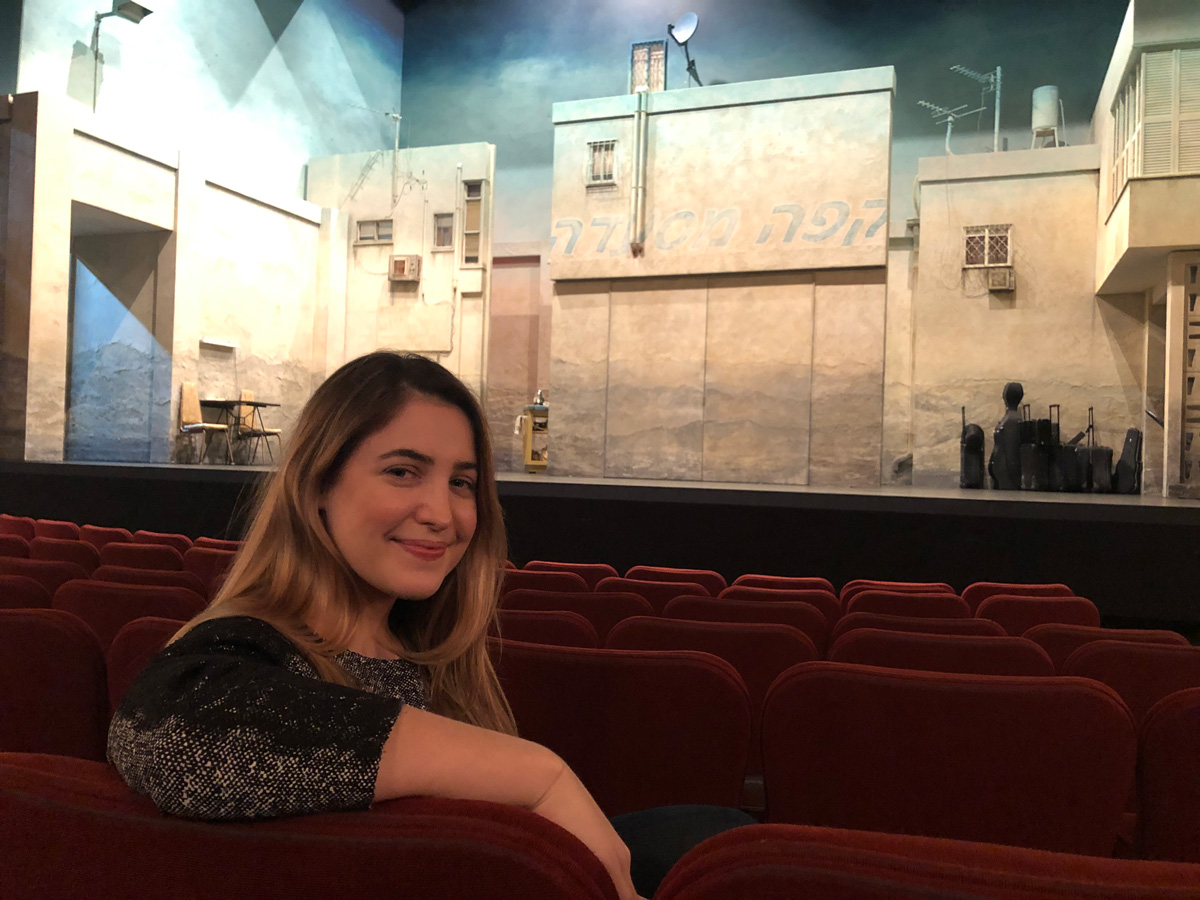 Eckhardt takes a rare break between shows on the Broadway set of "The Band's Visit." Courtesy of Alexandra Eckhardt

As it turned out, she could. Over the past five years, as Eckhardt lugged her five-string electric bass, standing acoustic bass, or both across the city on the subway, her list of playing credits has grown and grown. She subbed in the bands for a dozen-plus Broadway productions, including “Wicked,” “Dear Evan Hansen,” and “Hamilton.” The last, she says, with its bass-heavy, driving score had a big influence on her as a player and taught her endurance. The bassist plays for the show’s entire three hours. “You have to power through and have some granola on your stand,” she says.

Then two years ago, Eckhardt, 30, scored what every freelance musician longs for – a steady gig with a successful show. She holds the bass chair in the pit orchestra of “The Band’s Visit,” one of the most Tony award-winning musicals in history. Starring Tony Shalhoub, “The Band’s Visit” is the story of what happens when an Egyptian band mistakenly happens upon a small Israeli town deep in the desert. The score is flavored with Middle Eastern harmonies and rhythms, something Eckhardt hadn’t played before. “It’s one of the more quiet pieces I’ve played,” she says. “This has been a lesson in restraint.”

Though she has a regular gig, what most musicians dream of, Eckhardt works as if she doesn’t. “The Band’s Visit” is only 90 minutes long, so many nights she packs her bass and heads into the night to play with jazz, pop, or rock bands around the city. She’s performed with a long list of such bands including the soul duo Lipstick Gypsy, the American Idol winner Jordin Sparks, and Irish singer-songwriter Michael Brunnock. She regularly joins singer Sara Bareilles’s band, including in a recent appearance on “The Late Show with Stephen Colbert.” And this is what she likes and doesn’t like about her life — the unpredictability. She says she dreams of being able to make a dinner reservation with her boyfriend, who is a guitarist, but her ever-changing schedule won’t allow it. When either of them gets a chance to play, they take it.

“Even thinking past the next 24 hours is hard to visualize,” she says. “I write down everything carefully. It’s nuts but it’s fun.”

This makes her a versatile player (she also plays the cello and sings backup) and serves to hedge her bets. Even a show as lauded “The Band’s Visit” can close out of the blue, she says. That’s why she played in workshop performances of two Broadway hopefuls this year, one set to the electro pop of British singer-songwriter Kate Nash and directed by Andy Blankenbuehler, the choreographer for “Hamilton.”

“You are always trying to think of the next thing,” she says. “Being a freelancer in New York City, you have to have a lot of stamina and hustle.”

(she is on the far left, behind Bareilles, playing guitar)