Rittenhouse, showing students how to measure the tail of a mouse, teaches wildlife techniques and researches wild populations. She knows, for instance, just how many bears and bobcats could be lurking in your Connecticut backyard. 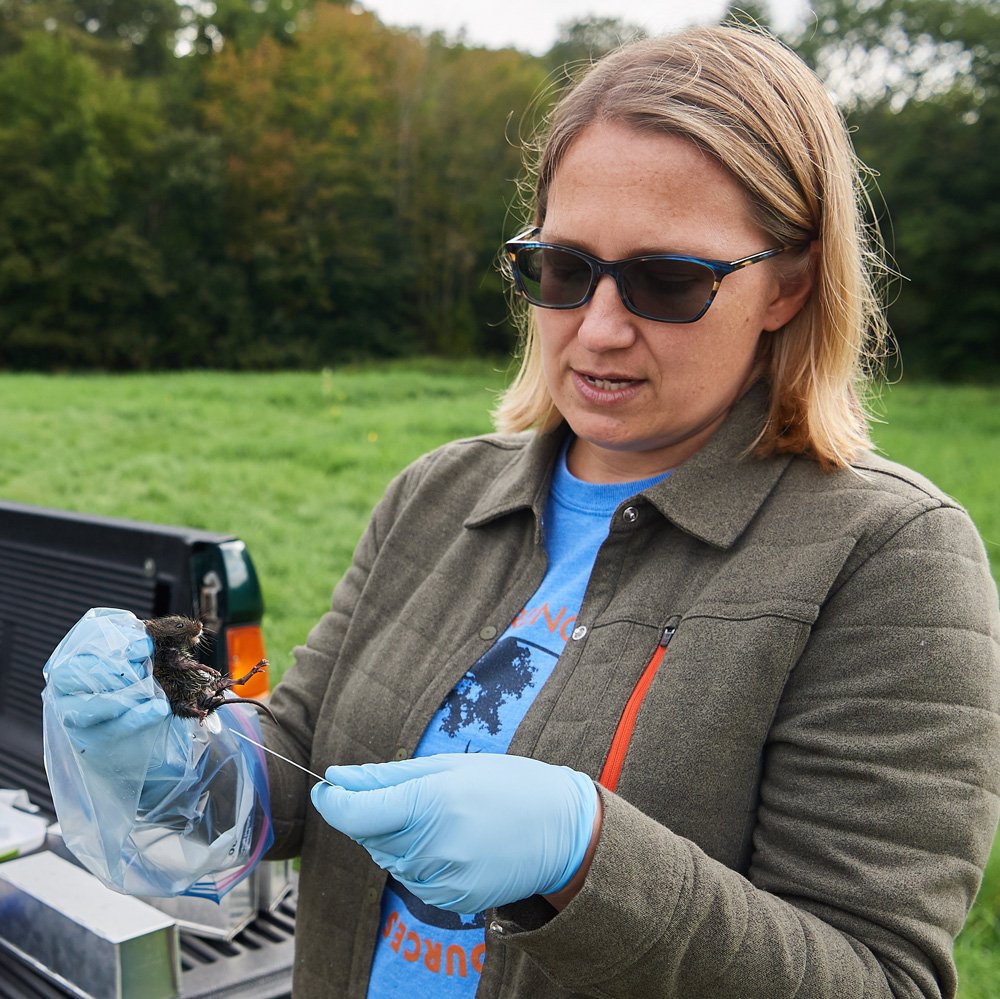 Rittenhouse, showing students how to measure the tail of a mouse, teaches wildlife techniques and researches wild populations. She knows, for instance, just how many bears and bobcats could be lurking in your Connecticut backyard.

“They’re just so quiet. People don’t see them even though they’re right there,” says Tracy Rittenhouse of the Connecticut bobcats she is studying. “I think they’re living in places more urban than we ever imagined.”

Her students have shown her pictures of a bobcat they spied in the parking lot of the Young Building on campus. “Bobcats are very good at avoiding people even though they’re active at all times of the day and night.”

Rittenhouse, associate professor of natural resources and the environment, was asked to help analyze data for The Bobcat Project that Connecticut’s Department of Energy and Environmental Protection (DEEP) began last year.

Despite having studied the state’s populations of everything from salamanders and bats to deer and bear, she finds this survey “super exciting.” Few in-depth studies have been done on bobcats anywhere in the country. So there’s a lot to learn. 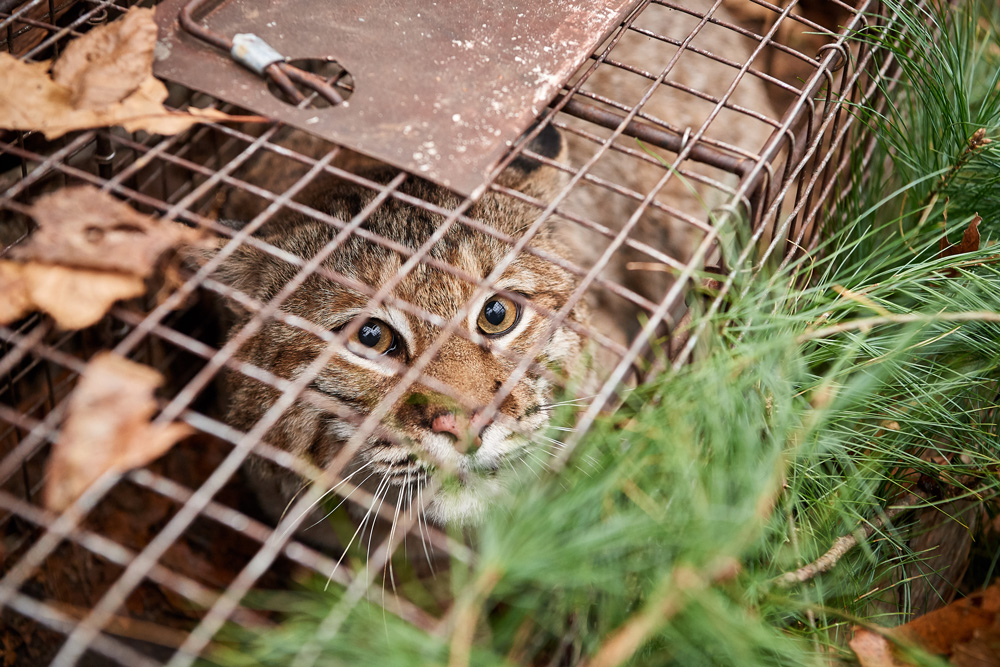 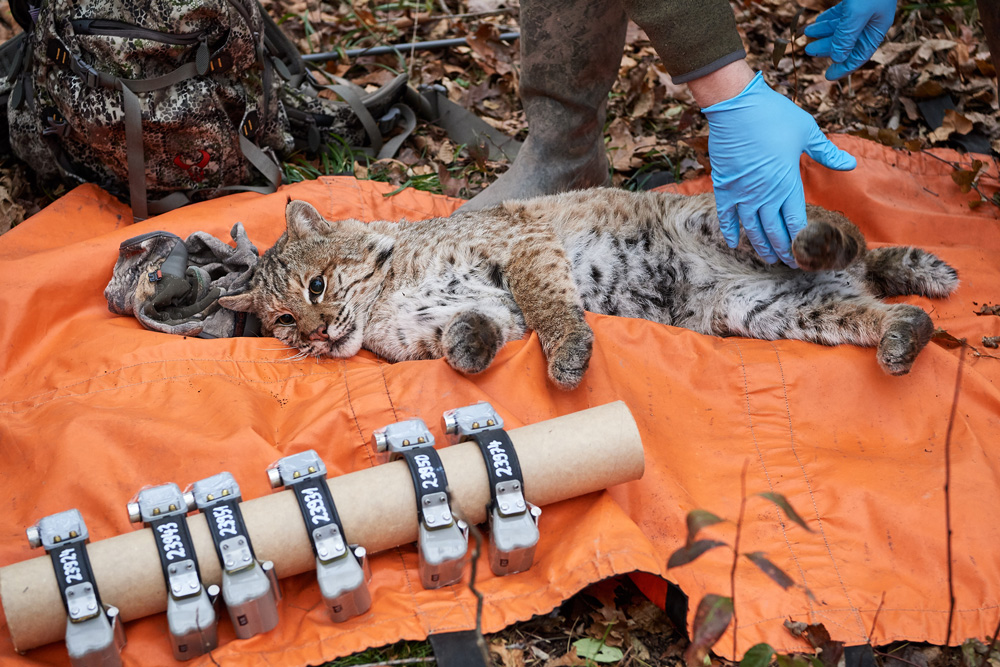 Rittenhouse works with DEEP biologists who are trapping bobcats, like this 35-pound male caught in the northeast corner in mid-November. Blood and hair samples are taken from the tranquilized cats who are fit with magnetic GPS collars that fall off after 300 days.

Q. What are you hoping the bobcat data you’re collecting will tell us?

A. It’s going to be really interesting to see how urban these cats go, what their movements are like, do their home ranges get bigger or smaller when they move into cities? And we’re doing some pilot radio isotope work on diet. We know they eat squirrels and rabbits and can eat deer. But do they also eat house cats or possibly turkey?

Q. DEEP tracked 50 cats last year and 30 so far this winter. What have you already learned?

Q. People always say the deer aren’t in our roads; our roads are in their forests. I guess that’s true for bobcats, too?

A. That’s true in many places, but here in Connecticut we’re living in the exact opposite of that. In the 1800s, before we had laws to regulate it, people completely deforested Connecticut and much of the wildlife was extirpated. Turkey and bear were gone; deer and bobcat nearly gone. Then the landscape was developed. So we have this forest that’s grown up around houses and because this forest has regrown, the wildlife community has regrown with it. Bear and deer are examples of species that have increased.

I grew up in the suburbs in Minnesota and the neighborhood that I grew up in looks pretty similar to how it did when I was 5 years old, because it’s just the lawn and the trees that my dad planted. What we have here in Connecticut are parcels an acre or two in size, where we let trees grow up in parts of it and don’t mow the whole thing, so it’s really interesting to see what wildlife species benefit from that.

Q. What other Connecticut species have made a comeback?

A. I’m trying to figure that out. I’m really interested in looking at different taxa. I like working with amphibians; they make a nice contrast to mammals because what they need from their habitat is quite different.

“THEY ARE MORE COMMON THAN I THOUGHT. THAT’S MY BIGGEST TAKE-HOME THUS FAR.”

Q. If it’s not breaking into my garage, why should I care about this wildlife, where it is, and in what numbers?

A. Wildlife serve as an indicator of habitat quality: If it can support a salamander population, it’s a healthy stream. We’re in this exurban landscape here in Connecticut, this intermix of urban and forest. Having these healthy ecosystems gives us better air quality and better water quality and improves the spaces that we live in. And I think people like to look out their window and see trees and see flowing water. Your day is a little better when you get a bit of that, right?

Q. Growing up, did you bring forest creatures and strays home?

A. I was not that child. I think most people in wildlife are, but I was more of a suburbanite. I grew up in a two-kid-one-dog-two-car-garage house outside Minneapolis. Most of my day-to-day experiences were going to the playground across the street. I remember mallard ducks on the pond.

Q. So what did foster this career interest?

A. I watched the Discovery Channel — a lot. And my family took road trips every year to national parks. I got to see the big charismatic places and to appreciate how fortunate we are to live here because of the awe-inspiring places that our national parks really are. 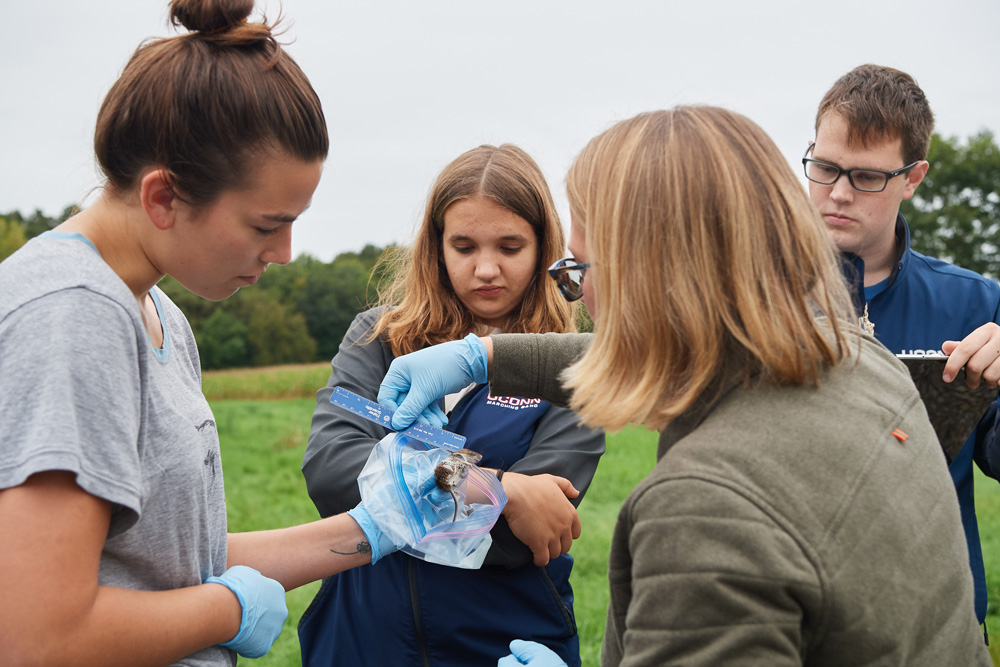 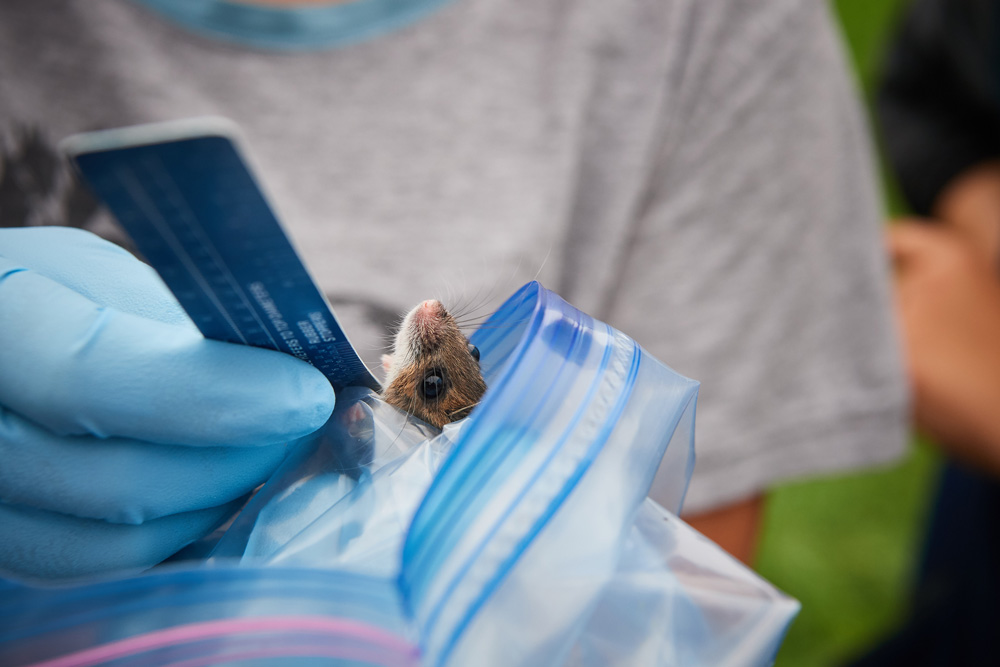 Students in Rittenhouse’s wildlife techniques class learn to trap, measure, sample, and release mice and voles in the fields and forest near Horsebarn Hill.

Q. What stands out from those trips?

A. I loved going to Glacier National Park and seeing the glaciers and the grizzly bears. My mom read “Night of the Grizzlies” out loud to us. Very scary book. [It recounts the true story of two separate fatal grizzly attacks at Glacier on one night in 1967.] We were camping in a tent trailer and my dad did not sleep at all.

I remember going to Yellowstone and being so excited and then being disappointed when I realized that there were human footprints everywhere. Before they had rules about staying on the path, people had had what I perceived as a negative influence on this beautiful place. And so I learned about how important it is to have managers, to have people who are making decisions about how to use the land.

Q. You attended undergrad at University of Wisconsin-Madison. How are your students here different than you and your peers were then?

A. We still thought we could protect all the species. These students are asking, How do we have forest that still has any wildlife populations in it? They think they are inheriting a planet that’s going to see a lot of change, and they’re going to be responsible for living in that change and managing that change, and they’re kind of bracing themselves for difficult decisions.

Q. That is so depressing.

A. [Laughs.] So one of the good things about studying population dynamics is seeing how resilient many wildlife populations are. Deer drop to very low numbers and become abundant again. And turkey. Raptors. So we know it’s possible for populations to rebound. There’s a natural capacity to survive. And that’s a good take-home from population dynamics. You don’t have to save every individual to save the population.

Q. Your children are 7 and 10. How are you passing an appreciation for nature on to them?

A. We try to go on a hike every weekend, even if it’s 20 minutes. We’ve gone to the Grand Canyon, Zion, and Bryce. No pop-up trailers, though. We cheat and hotel it.

And then there’s this — in a discussion about college I mentioned going to school in Milwaukee and Rittenhouse said she spent a summer there training to be a prima ballerina. So of course I asked:

Q: You could have been a prima ballerina?

A. I danced. I was reasonably good. I spent the summer between freshman and sophomore year of high school training with the Milwaukee Ballet. We took a class on everything you had to do to be a prima and one of the things was not to go to college. My reaction to that was: I’m going to go to college. I still danced all through high school, but I stopped living that dream that I was going to be the next big star.

Q: Did you dance in college?

A. No but I did think about majoring in voice.

A. Yes. I didn’t pursue it, though. I had a choral director who said: You sing because you like to sing. To do it as a career, you have to be driven to sing.