Taking It To The Streets

Taking It To The Streets 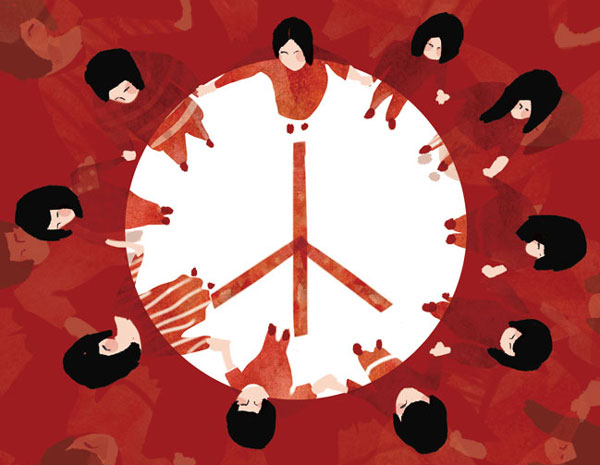 This past summer I was lucky to be in Tokyo during a major moment in modern Japanese history. For the first time in more than 50 years, Japanese citizens poured onto the streets in regular protest, beginning in groups of several hundred last June and growing to demonstrations of more than 100,000 people by the end of September.

Protestors were seeking to preserve the law of their land, specifically the war-renouncing Article 9 of the country’s constitution. In the wee hours of Sept. 19, the administration and its supporters had moved ahead to enact new security legislation known as “collective self-defense,” despite opinion polls, demonstrations, and emergency meetings of senior lawmakers that indicated a wide majority of Japanese citizens opposed the legislation. The moment is forever recorded in photographs on front pages around the world of a fist-fighting melee inside parliament and tens of thousands outside in the rain shouting, “No way! No war!”

It was important to me as a historian, if nothing else, to observe and mingle among the protestors on several occasions in order to better grasp the significance of what will be missed in books of the future that might simply state, “New security legislation was enacted in September 2015.”

Since its devastating defeat in World War II, Japan’s self-definition has rested powerfully on Article 9, which forfeits war as a sovereign right and for many equals national identity.

By early summer, a growing percentage of the Japanese population was realizing that their current government was poised to change all that. For a host of reasons — not in the least the way parliamentary voting works in Japan — opposition politicians failed and the ruling party was able to ram through special legislation that would forever redirect the nation’s peaceful international posture.

The truly rich and diverse cross-section of people on the streets made clear a broad refusal to accept this new policy for Japan. Opinion poll after opinion poll revealed and continues to reveal that a majority of Japanese agrees with the protestors and, as of this typing in late fall, tens of thousands — even hundreds of thousands — continue to demonstrate, and remain committed to preserving a decidedly anti-war stance for Japan.

Different from many mass protest movements around the world, whose participants seek sweeping changes to the structure of their societies, the protesters in Japan continue to clamor to maintain the central law of their land: Article 9.

It is important to keep in mind that even with its war-renouncing clause, the Japanese constitution provides for the right of self-defense. In addition and almost since its inception, some of the country’s legislators with critical American backing have gradually transformed the nation’s forces into a world-class military.

In other words, what’s at stake is not whether Japan will have a military, but rather when, where, why, and how Japanese troops will fire their state-of-the-art weapons.

Japan’s constitution went into force in 1947 under American occupation (1945-1952). It has never been amended, and for the first time in its nearly 70-year history a divergence has emerged publicly over the nature of its legitimacy.

In one camp is current Prime Minister Shinzo Abe and his supporters. Abe, grandson of a man charged as a Class A war criminal, is well known as a hawk with a rather strong determination to use history as a weapon to define himself and Japan.

Less well known, however, is Abe’s understanding of the Japanese constitution as a masochistic symbol of the country’s defeat to the Allies in World War II — something that he argues undermines the “honor” of Japan.

Significantly, this point of view incorporates not only the constitution’s anti-war clause, but also its removal of the Japanese emperor from the center of political power, its separation of religion and state, its provisions for secular education, and the status of women — among other things.

On the other side of the debate is the majority of Japanese people who want to maintain Article 9, and who support the protestors’ central demand even if they do not join them on the streets.

This standpoint concurs, moreover, with that of most constitutional law scholars in Japan, including my colleague, Keigo Komamura of Keio University. Professor Komamura argues that, sure, we Japanese know that the Americans imposed our constitution during the occupation, but that doesn’t make the constitution a “loser.” Like women’s right to vote, which it includes, the constitution has become definitional to Japanese society today and thus is a “legitimate imposition,” very much including Article 9.

Remarkably, thousands of law scholars like Professor Komamura together with professors of political science, history, economics, and others such as box office movie stars and popular singers, regularly joined in with the protests throughout the day and night of Sept. 19, making clear to many Japanese that what’s at stake on the streets is neither radical nor extreme; rather it is the meaning of “Japan.”

“Aspiring sincerely to an international peace based on justice and order, the Japanese people forever renounce war as a sovereign right of the nation and the threat or use of force as means of settling international disputes. To accomplish the aim of the preceding paragraph, land, sea, and air forces, as well as other war potential, will never be maintained. The right of belligerency of the state will not be recognized.”

Provisions in the bills include the ability for the Japanese government to deploy troops abroad in combat settings to aid an ally such as the United States. For many, this amounts to nothing less than a palace revolution on the constitution itself.

Arguably, what touched off this far broader consciousness and what certainly surprised many Japanese was a live television appearance on June 4, 2015, by three prominent constitutional law scholars.

The three testified unanimously that the bills were unconstitutional, including the scholar who was especially chosen to represent the administration’s views. They maintained that the Abe administration’s notion of “collective self-defense” exceeds the constitutionally-permitted limits of safeguarding Japan. They argued that the bills also exceeded the definition of peacekeeping efforts under United Nations command and humanitarian relief work, which a majority of Japanese also supports.

Although the professors would only temporarily halt the legislative process, their collective moment in the spotlight taught the nation that something was awry and provided a strong boost of legitimacy to the claims that the then still small numbers of protesters were making on the streets.

Within days, “Preserve the Constitution” became a rallying cry. Noticeably the age of the demonstrators grew younger, and the actions spread throughout the country.

One moment that will always stand out for me came on June 20. Together with a colleague who teaches in Chicago, I participated in a peace action called, “Women in Red.” With abundant police permission, roughly 15,000 Japanese women, girls, and a few men who had been invited along, stood out from the customary Tokyo chic of beige, black, and navy by wearing all sorts of bright red clothes and hats and held hands with strangers to encircle the Japanese parliament building (called “The Diet”).

Speakers spoke, chanters chanted and danced in a chorus to save what they see as Japan’s gift to humanity: Article 9. Later on, I learned from a friend that her 90-year-old mother wore red pa­ja­­­mas on her futon all day to mark the moment. In still immeasurable ways, the effect of this day would spark others to remember the privilege of living in an open society and of the need to work to preserve it.

History Professor and Fulbright Scholar Alexis Dudden writes and researches extensively about Japan and Northeast Asia. She spearheaded the “Open Letter in Support of Historians in Japan,” an attempt to receive, without reparation, an official apology on behalf of the “comfort women,” Japanese women and girls forced into sexual slavery by the Imperial Army during World War II. To date it has been signed by 350, mostly English-speaking, Japan scholars. 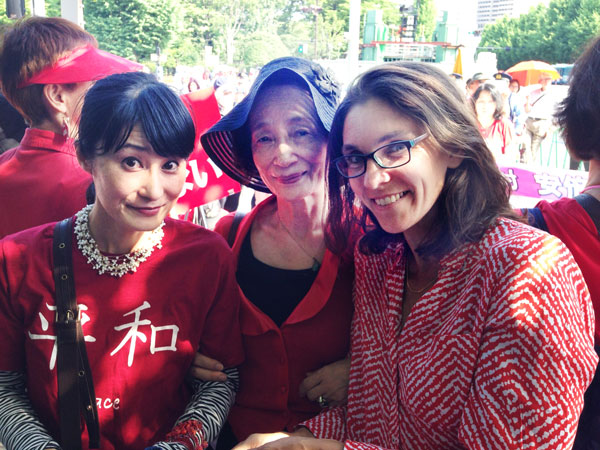 This photo is from the Women in Red protest. I am standing with Yokoyu Sonoko, one of Japan’s leading feminists. She is a sensation. For me, it was like standing next to Mick Jagger.