Shakespeare’s Folio: What these eight alums’ dreams are made of 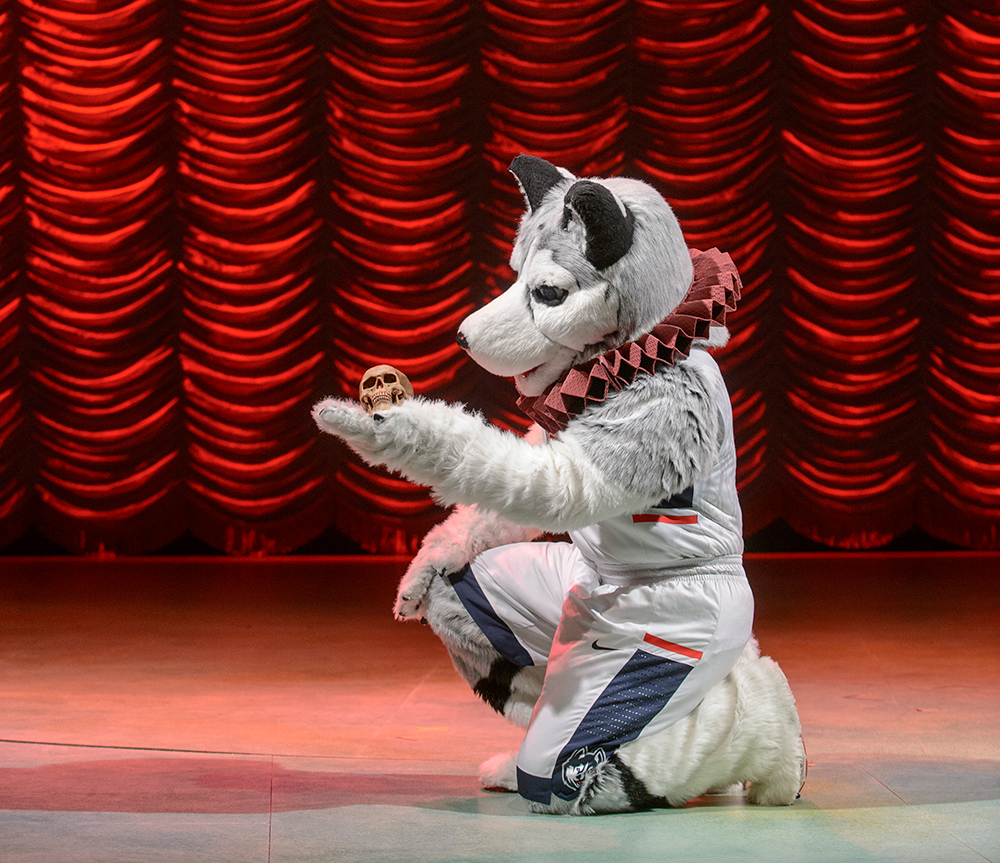 Think sports tournaments are grueling? Try performing in three different shows playing three different roles on three different stages in one day! That’s what U. Jonathan Toppo ’84 (SFA) does at Oregon Shakespeare Festival, where he is resident fight director and actor. On his wedding day, he auditioned in the morning, married in the afternoon, performed in “Julius Caesar” at night, and was up the next morning to act in “Our Town” and “The Taming of the Shrew.” Toppo’s one of a number of alums schooled in Shakespeare at UConn and for whom the Bard remains an ever-fixed mark, if you will. At UConn, says Colby Lewis ’14 MFA, “we were never not around Shakepeare. ... If you can do Shakespeare as an actor, you can do anything.” — Mary Anne chute Lynch ’76 (CAHNR)

Geoffrey Sheehan ’84 (SFA) and Laura Sheehan ’85 (SFA)
Geoff Sheehan leapt, ran, and shouted wildly as a Lost Boy in “Peter Pan” at age 11. Cyclops was Laura Sheehan’s debut role at age 13. Unrelated, but with the same last name, they met in an acting class at UConn. Geoff courted Laura in the snow with a ride home on his bicycle. They went on to pursue acting in L.A., before coming home to marry in 1988.

Finding a void of Shakespeare in Connecticut’s capital, they erected a stage in Hartford’s Bushnell Park and created Capital Classics Theatre Company in 1991. The company focuses on training actors, says Laura, noting that Juliana Brease ’16 (SFA) joined the company as Desdemona in “Othello” this summer. During that show, Geoff killed Laura every night in their respective roles as Iago and Emilia, after which they drove home to their four kids. Geoff is director of theater arts at Housatonic Community College in Bridgeport, Conn. Laura runs Calculate, a digital marketing company.

Geoff’s dream role — King Lear
Laura has performed hers, Lady Macbeth, but if she could turn back time, she’d be Katherina in “The Taming of the Shrew.”

Hillary Parker ’08 MFA
“You need Dale Rose, the guy who’s going to make you dance a monologue,” Parker was told while auditioning for graduate school. Indeed, “Ferret out! Ferret out!” Rose cried, demanding she eke out all the ways to present a character, including dancing a monologue and more.

“We have a ton of tools in our actor toolbox” thanks to Rose, says Parker.

She was onstage at age 10 with local youth theater in Lake George, N.Y., and had been in a number of musicals in New York City before coming to graduate school at UConn to work with Rose, drama professor and Director of Performance. The MFA program admits only 10 students every three years. Graduates are as loyal to Rose as sons and daughters, and many appropriate his love of the Bard.

“Whenever I can be in a Shakespeare piece, I will,” says Parker, who now lives in Philadelphia. “It is fascinating how he examines human nature. . . . I audition whenever I can.” Parker has performed both male and female Shakespeare roles.

Dream roles — Rosalind in “As You Like It” and Mercutio in a “gender-bending ‘Romeo and Juliet.’”

Richard Ruiz ’98 MFA
“When I was a kid I wanted to be in toy commercials. The goal was to get toys, not …acting,” says Richard Ruiz. The goal became acting of course, and then directing — “Spamalot” at Connecticut Repertory Theatre (CRT) this past spring.

“Oh, I actually have to call the shots,” Ruiz realized when Broadway stars Richard Kline (“Sunshine Boys”) and Marianne Torres (“Wicked”) showed up with a cast of 25 UConn students and an orchestra. “I was so nervous. I felt like I was starting school again.”

Acting with professionals was “invaluable” when Ruiz was at UConn, he says, but Suzuki training for actors, in which students stood on the balls of their feet delivering Hamlet’s “To be or not to be” monologue, was “torture.” Ruiz has traveled with European and national tours of “Jesus Christ Superstar,” “Man of LaMancha,” “Sweet Charity,” and “Urinetown,” and performed Shakespeare at the Folger, Yale Rep, and CRT.

“There are still times when I think I’m going to walk away from this. It may be total insanity,” he says. “At the same time, the successes and joys are so great.”

U. Jonathan Toppo ’84 (SFA)
“Neighbors were throwing eggs at us,” says Toppo of performing Shakespeare in New York City parks in the 1980s. At the time he was living the struggling-actor cliche, sharing a 600-square-foot apartment with two (later, five) UConn classmates, all juggling auditions and pay-the-rent jobs.

“The theater’s a cruel mistress. It’s hard. It’s hard, but you come back,” says Toppo, who has had to sweat out auditions at the Oregon Shakespeare Festival, 25 years running. “I’m a hopeless romantic. I love the theater. When I walk backstage, it’s just home.” He performed three roles in “Pericles” last year at the Folger.

U. Jonathan Toppo – Fishermen (U. Jonathan Toppo, Cedric Lamar) at Pentapolis are unaware of the shipwrecked Pericles (Wayne T. Carr) behind them. Photo by Jenny Graham, Oregon Shakespeare Festival.

Thomas Brazzle ’14 MFA
When Thomas Brazzle was a freshman in high school, a student in the school was killed in a car accident. Crying, the boy’s mother came up to Brazzle after his performance as Jesus in “Godspell” and said, “Thank you for restoring my faith. I can finally let go.”

“This is why I do theater,” says Brazzle. “You never know how it’s going to affect people.” Fast forward to his audition for UConn graduate school. “Tell me about your father,” requested Director of Performance Dale Rose.

“I haven’t seen him since I was eleven,” Brazzle answered. Brazzle says Rose ordered him to perform his monologue again as if he were speaking to his father, “telling him how much he screwed up my life. I did it totally different.”

With his MFA he has filled lead roles in world premieres in New York, off-Broadway and in Shakespeare theaters in Manhattan, Arkansas, and the Berkshires. Brazzle also writes plays and teaches playwriting. “Shakespeare is very rewarding, it’s very challenging . . . the language is so rich . . . I could live happily, if I could do Shakespeare forever.”

Nick Dillenburg ’08 MFA
“I was an athlete. That’s how I defined myself,” says Nick Dillenburg. Then he walked onstage to help a friend audition for a high school show, was cast despite his protests, and was hooked. When he auditioned for UConn’s Master of Fine Arts program with Director of Performance Dale Rose, “It was the best 15 minutes. I can’t stress how important he was, he is, to me. Dale wasn’t afraid to push us hard. Was it easy? It never was. There were a lot of sleepless nights. I definitely thought of leaving.”

After graduating, talent agent and UConn lecturer Pat McCorkle asked him to audition for “The Tempest.” He has performed Shakespeare in New York, Washington, D.C., Chicago, Boston, and Bermuda and now is in “Sleep No More,” an innovative “Macbeth” in which the audience follows actors through five Manhattan warehouse floors transformed into forests, bedrooms, and more. “The audience is in my face every night.”

Dillenburg made his cable television debut in Netflix’s “Orange Is the New Black” this summer and is now shooting season five of the show.

Nick Dillenburg – Dave Droxler and Nick Dillenburg in ARTBARN's This is a Ghost House at the Byrdcliffe Arts Colony. Photo by Jared Flood Photography.

Colby Lewis ’14 MFA
“I used to be big, big into basketball,” says Colby Lewis, but he declined sports scholarships to pursue a business degree at the University of North Carolina in Wilmington. A production assistant for the WB network’s “One Tree Hill” saw Lewis in the gym there and recruited him to play basketball on the show.

That led him to UConn. “Grad school changed my life as a professional actor,” says Lewis. “UConn prepares us for anything we will see,” he adds, in large part because of its Shakespeare focus. “We were never not around Shakespeare. Shakespeare is your best teacher. It makes you honest. If you can do Shakespeare as an actor, you can do anything. ... HBO’s ‘Game of Thrones’ is a reincarnation of ‘Titus Andronicus.’”

Lewis’s first television pilot, “Drew,” is on CBS this fall. He has performed in “One Night” in Miami, Gotta Dance, Utah Shakespeare Festival, and Shakespeare & Company. In Shakespearean roles, says Lewis, “I’m fascinated by the guys who have to use their smarts [and] rely on their resources rather than their lineage.”

Dream roles — Benedick in “Much Ado About Nothing” and Othello.

Colby Lewis – Colby Lewis as Cassius Clay in One Night In Miami at the Denver Center for the Performing Arts. Photo by Jennifer M Koskinen