New Research Proves That Some Kids “Grow Out” of Their Autism Symptoms Scientists at UConn are using a high-tech fMRI system to figure out how — and why.

New Research Proves That Some Kids “Grow Out” of Their Autism Symptoms Scientists at UConn are using a high-tech fMRI system to figure out how — and why.

Nearly 30 years ago, research was published claiming to have documented recovery from autism spectrum disorder (ASD) in some children.

“People were for the most part pretty dubious,” says UConn Distinguished Professor of Psychological Sciences Deborah Fein of the research that was largely brushed off.

Fast forward almost 20 years. In Fein’s own practice, she noticed a subset of kids who seemed to “fall off the spectrum” during their course of treatment for ASD. Why was this true for some children and not others?

“That is when my interest began,” says Fein. She and Inge-Marie Eigsti, associate professor of psychology, have been studying these individuals, whom they refer to as “optimal outcome” or “OO,” ever since. Unlike researchers 30 years ago, they have fMRI (functional Magnetic Resonance Imaging), a powerful technology that lets them peer into the brain in search of nitty-gritty details about how these individuals lose their diagnosis.

Is OO achieved by reverting to typical neural pathways? Do OO individuals use entirely different areas of the brain not typically accessed for certain functions? Why these children?

GETTING UNDER THE HOOD
Fein and Eigsti are using fMRI to find answers inside the brain, looking for patterns that could reveal the ways that interventions and therapies for ASD may have helped these OO individuals lose their symptoms.

“The [fMRI] imaging is important to seeing patterns that have developed as these individuals have compensated,” says Eigsti. “On the outside they appear typically developing; we couldn’t tell them apart from their typically developing peers. One really interesting question this leaves is what’s going on in the brain. Is there a fingerprint or a history of the disorder left in the brain? What is happening under the hood?”

To find out, they had study participants lie in the scanner and read statements while the researchers noted what parts of the brain were active as they processed the information. Some of the phrases were designed to engage areas of the brain more involved with visualization, such as “A pair of glasses turned on its side looks like a snowman, true or false?” Others were designed to illuminate areas of the brain processing language, such as “Thanksgiving Day falls in the month of December, true or false?”

When processing high- and low-visualization language, different areas of the brain are recruited, and the resulting fMRI images give a glimpse into how the mind is piecing together and comprehending information. The results are not immediate, notes Fein. Once the images are taken, a lot of complicated data are crunched before anything can be gleaned.

“In the past, autism was considered a lifelong disorder. People conceptualize autism in much the same way other life-long disorders are considered.” These images seem to prove that this isn’t the case.

SHEDDING LIGHT
In this case, the results were somewhat surprising. Rather than the OO participants’ brains resembling their typically developing (TD) peers or their ASD peers, their brains looked different, with aspects of both ASD and TD processing.

With obvious excitement, Eigsti explains that her team noticed “very sharp differences” among the groups. The OO kids were activating distinct areas in the brain that are important in control and attention regulation, motivation, and decision making — and they were showing greater amounts of activation than their ASD or TD peers.

Deborah Fein's newest book, The Activity Kit for Babies and Toddlers at Risk: How to Use Everyday Routines to Build Social and Communication Skills

FLIPPING THE SWITCH
In 2000 the rate of autism spectrum disorder in the U.S. was estimated to be about 1 in 150. By 2014, that rate had jumped to an estimate of 1 in 68. No clear cause has been identified for the alarming escalation but, in light of these statistics, parents of young children are kept on their toes with questionnaires at well-child doctor visits.

The forms, some of which Fein helped develop, ask questions like “Have you ever suspected your child is deaf?” or “Does your child make eye contact with you?” Though cumbersome to complete with a squirming baby in tow, they are pivotal for noticing signs of ASD early on.

A mother of one of Fein and Eigsti’s study participants described her child’s subtle spiral into autism by saying it was as if her child was on “a dimmer switch,” slowly retreating into himself. If the questionnaires do their work and a diagnosis is made early, children with ASD seem to have a better chance of switching the light back on and leaving their diagnosis behind them.

For most individuals who achieve “optimal outcome,” or OO, the path seems to be one of diligent observation and early diagnosis followed by extensive behavioral treatment, such as applied behavioral analysis, or ABA. With ABA small tasks or behaviors often taken for granted, such as making eye contact, are practiced repeatedly with plenty of positive feedback and celebration as reward for task completion. This repetition may be key in forging compensation pathways seen in OO individuals’ brains, the pathways that help flip the switch.

But not always. Fein recalls two early patients. “It was a very poignant example,” she says. “Two mothers of autistic children became friends. They went through the same treatments, and one child recovered whereas the outcome for the other was quite different; he is still seriously disabled. The parents were highly supportive of one another, very close. The mother of the child who did recover felt terrible. Why did her child respond to the treatment and recover when the other child did not, even though both kids underwent the same treatment?”

The hope, of course, is that these fMRI images that illuminate compensation measures in the OO brain will not only confirm recovery but help figure out the whys and hows behind it.

Reflecting on the amazing plasticity of the brain and on some of the factors that may come into play for answering this question, Eigsti explains, “It was always thought you can’t teach old dogs new tricks and that you had to be young and flexible to learn new things. Now we know that, though difficult, it is certainly possible.”
In this case, we are referring to children, and among this cohort the “old dogs” may be toddlers or preschool kids, which demonstrates how key earlier intervention may be.

WHAT NEXT?
The next stage of the team’s research will focus on monitoring the OO group’s progression into adulthood.

Follow-ups are likely to involve bringing back some of the OO kids to see how they are doing as they transition into young adulthood — how they’re doing with things like finding housing and living independently, for instance.

“We want to follow them into their twenties and see how life goes,” says Fein. “We also want to study other aspects, such as are they more prone to anxiety or depression?”

Of course they don’t want to lose track of success stories either. One early study participant, Jake Exkorn, and his mom still check in at significant milestones. “He is now a busy, active college student,” notes Fein. She also is quick to say that this may not be the best path for everyone. “OO is one kind of good outcome, not the only good outcome.”

The yellow shading shows roughly the areas where the vast majority of the public will process language, especially sentences that involve visual imagery. The yellow shading also shows areas of the brain often associated with self-reflection, imagination, and logic. The blue shading depicts results from Eigsti et al’s paper; teens with a history of autism show increased involvement of language areas. The teal shading in the OO brain shows the heightened activity of regions of the brain involved in motivation, logic, and control. The OO brain activity is unique, showing greater activity than both the TD and ASD brain patterns. 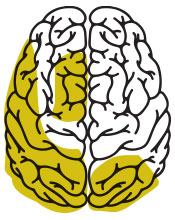 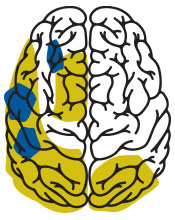 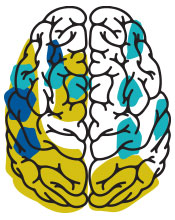 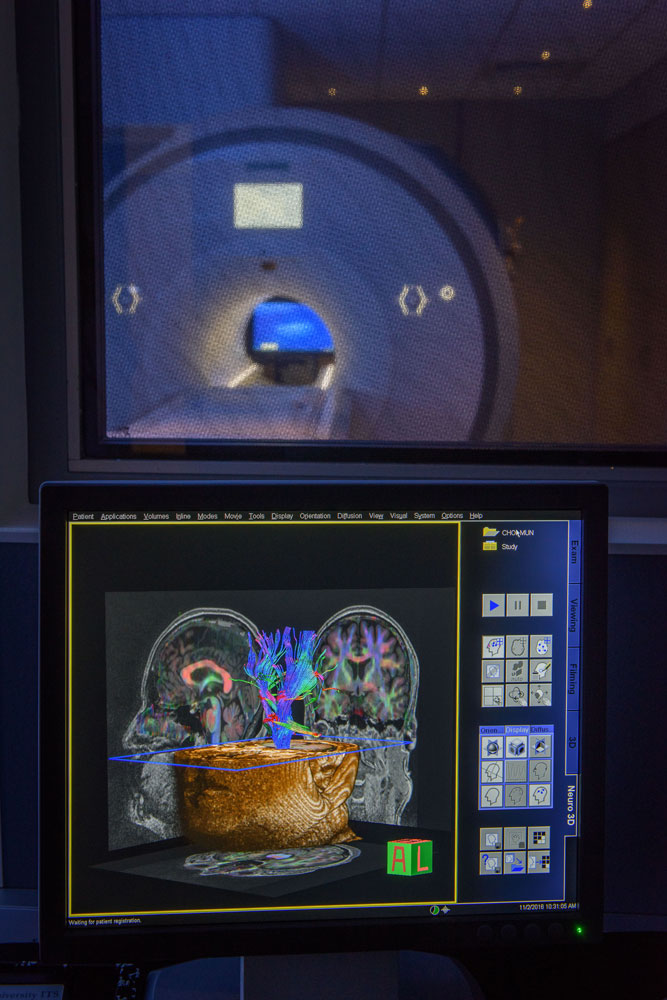 How does the fMRI system work?
To understand how a magnetic field can turn thoughts into colorful display outputs and exciting data sets, one must follow the pathway traveled by a red blood cell and consider some quantum mechanics.

Blood becomes oxygenated as it is pumped through the lungs where, with each breath, red blood cells pick up oxygen molecules destined for cells throughout the body. Cells rely on a steady supply of oxygen to survive, especially those of the brain, which consume around a quarter of the oxygen we inhale.

Cells are ultimately composed of molecules that contain nuclei that spin more or less randomly unless their spins are disrupted, for instance if they are caught in a magnetic field. The strong field produced by the fMRI machine captures and aligns the nuclei, causing them to become synchronized. In their synchrony the machine then bumps the nuclei. This nudge will cause the nuclei to fall out of synchrony, and the rate at which they work their way out of this alignment emits radio frequencies that are picked up by the machine.

When a thought materializes, information is processed, or one reacts to a question, neurons respond and transmit signals to various regions of the brain. This process changes how blood flows, with active areas calling for more oxygen and therefore more blood. This change in blood flow, or hemodynamics, elicits signals registered and displayed by fMRI in beautiful and powerfully informative data sets.