UConn’s Tenth Truman Scholar is a Husky and a Cypriot 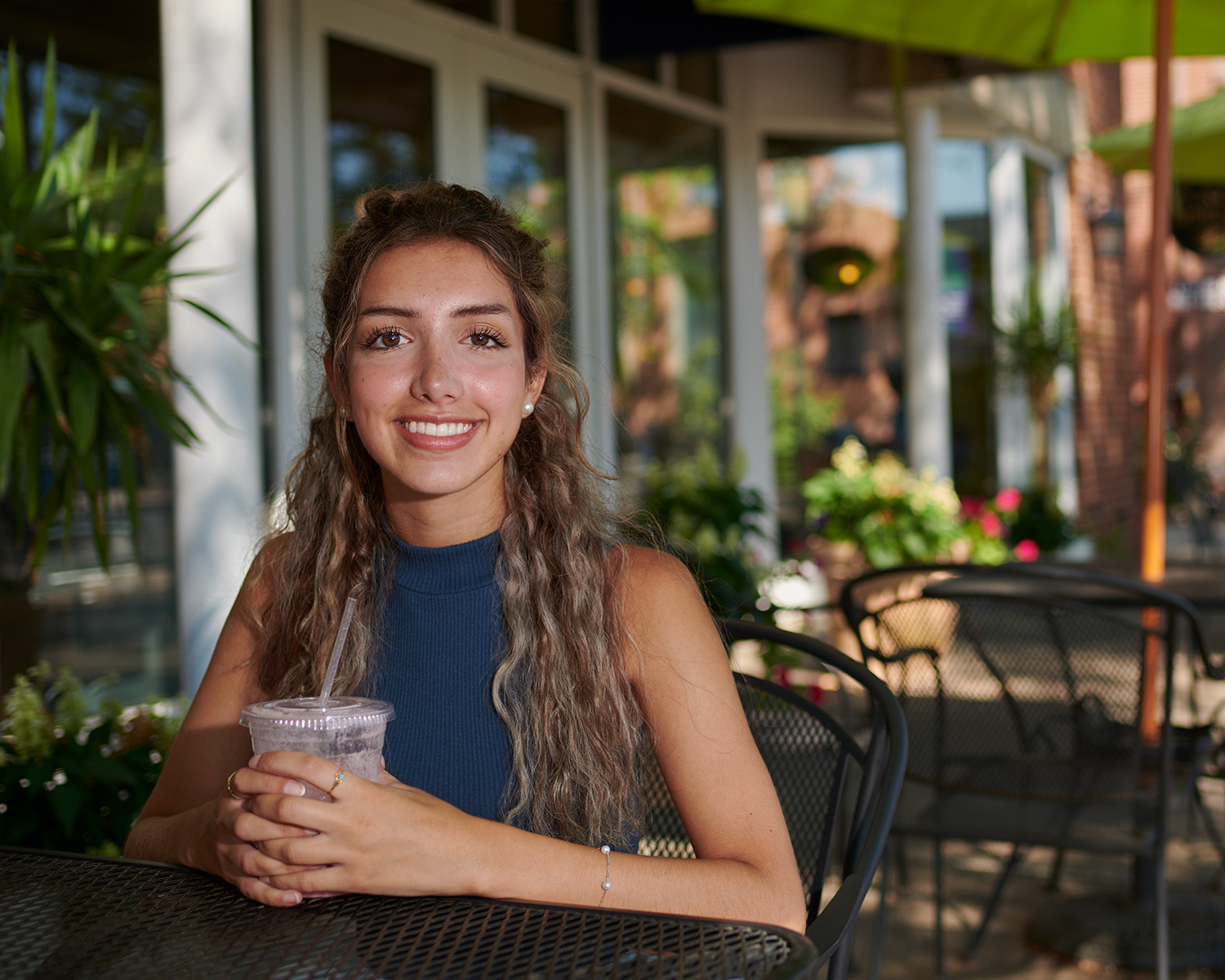 Irene Soteriou at Brew Bakers in Middletown, Connecticut, in August — the morning after getting back from her summer spend interviewing refugees in Cyprus.

Irene Soteriou ’23 (CLAS) has an easy presence, a quick laugh, and a fondness for whipped cream on her pancakes — which makes her seem pretty much like your average 21-year-old college student. In many respects she is, but in others, not so much.

Soteriou was born shortly after her parents, Julia and Marios, came to this country from the Eastern Mediterranean island nation of Cyprus. Growing up in Middletown, Connecticut, Soteriou says, “I was all girl. I loved wearing dresses with sparkles, and my favorite toy was an American Girl doll named Lydia.” And then she laughs, adding, “I remember in preschool I wanted to grow up to be a princess.”

In the intervening years, the sparkles in her wardrobe have pretty much gone by the wayside, and Lydia has been put away for safekeeping. Soteriou’s new career goals center on justice and human rights — decidedly more impressive than any run-of-the-mill fairytale princess. One thing that has remained a constant for the graduate of East Catholic High in Manchester, Connecticut, is her commitment to family, both here and abroad. She and younger brother Constantinos traveled to Cyprus every summer with their parents to visit grandparents and other relatives. “I love it there,” she says, “but I can’t imagine how different my life would be if that’s where I’d grown up.”

Soteriou spent much of this past summer in Cyprus, traveling from village to village interviewing Cypriot refugees. “I was speaking with folks who lost their homes in the 1974 Turkish invasion. It’s tragic because many of these refugees will likely pass away without ever having the opportunity to regain their homes.”

She wants to stop human rights violations, particularly in the Middle East. “I don’t see a lot of [human rights] decisions that I holistically agree with, and I think there’s a need to find a different way of doing things; there’s a need for a shift in how we engage with the rest of the world. It’s up to my generation to do that. We craft the future for ourselves, so it’s up to us to do better.”

She hopes her unusually styled pre-law double major of statistics and cognitive science will come into play here. “I believe that there is still so much untapped potential for fields like cognitive science to revolutionize the ways in which we craft more carefully informed and targeted approaches to conflict prevention, crisis resolution, and survivor rehabilitation,” she says.

“My hope is that entering the foreign policy realm with the robust understanding of brain and behavior that I am gaining through my studies at UConn, along with the analytical tools that I am developing in my statistics classes, will enable me to lend certain unique strengths and perspectives to the table.” 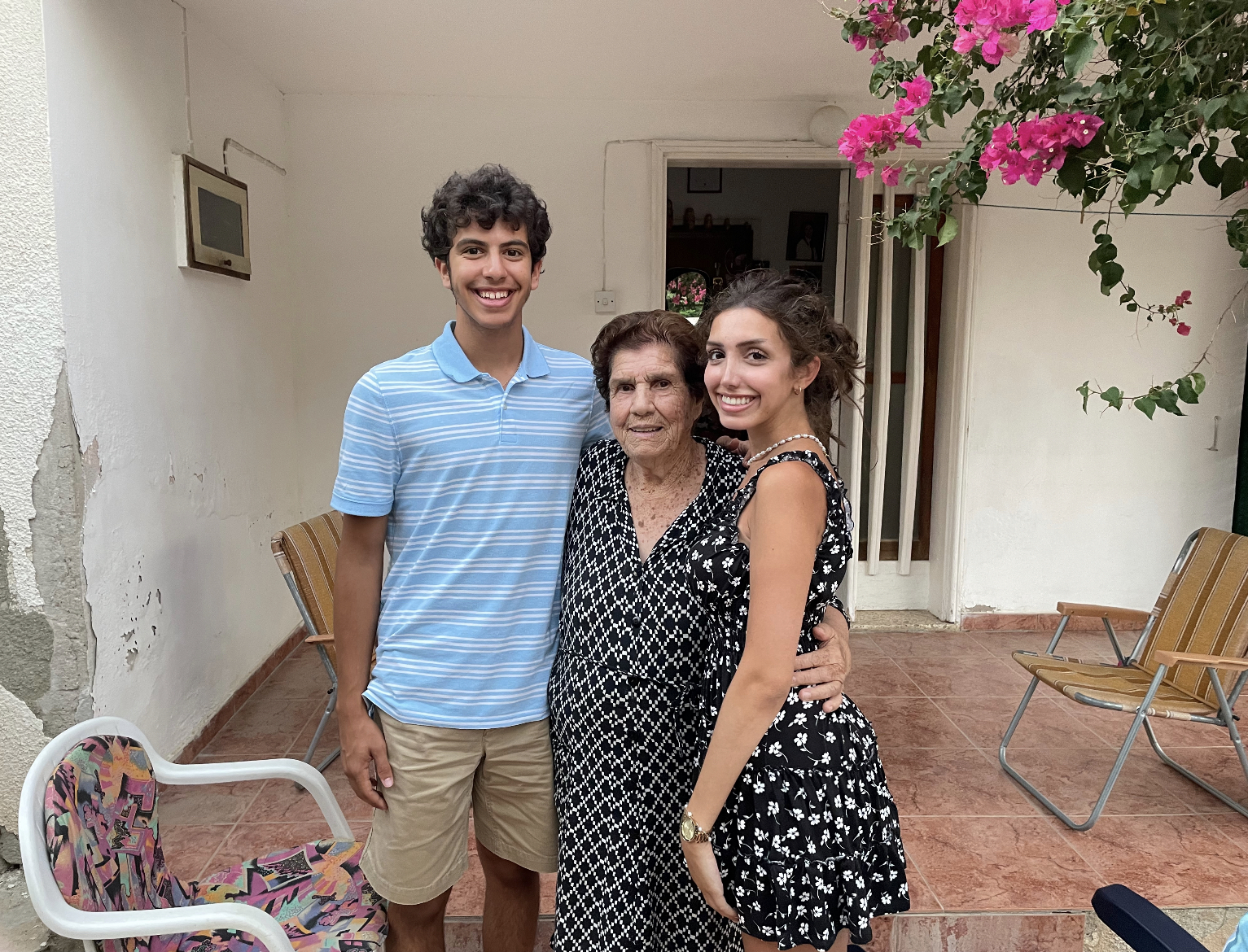 Soteriou poses with her brother and great aunt, a Cypriot refugee, during her recent trip to Cyprus.

Soteriou’s impressive combination of scholarship and activism has earned her extraordinary accolades. In 2021, she was named a Newman Civic Fellow, and in the spring of 2022 she added the designation of Truman Scholar, marking only the 10th time since 1986 that a UConn student has won the prestigious honor, which recognizes future leaders in public service.

Among her many student commit­ments, she serves as speaker of the Undergraduate Student Government, and is founder and president of the UConn Human Rights Symposium. She also founded and serves as executive director of the Student Coalition for Refugees and contributes as a student representative on the President’s Committee on Corporate Social Responsibility. This past year she joined UConn’s fourth cohort of Bold Scholars — a program that fosters leadership skills in young women.

“Bold is the best thing I’ve done at UConn,” she says of the two-year program students enter in their junior year. “It’s about building strong relationships with ambitious women from a number of different fields.”

The program’s director, Liza Boritz ’01 (SFS), ’22 Ph.D., calls Soteriou “amazing” and notes how at a weeklong spring retreat, “her energy, passion, and sense of humor were infectious for her peers and me. It’s hard not to be inspired by her words and her work.”

Amid all the accolades, Soteriou says she continues to ground herself in family advice. Cheering her on from Cyprus as she prepared for her Truman Scholar interview, her paternal grandfather, Kostas, told her she was “stubborn, but in a good way.”